The number of scientific publications signed by more than a thousand authors—a phenomenon known as hyperauthorship—has grown over the last decade, according to a report that analyzed 15.7 million articles from a range of fields published in journals indexed in the Web of Science database between 2009 and 2018. Published in December by the Institute for Scientific Information (ISI), a bibliometric database service provided by Clarivate Analytics, the survey identified 1,315 papers published between 2013 and 2018 with more than 1,000 names on the authors list, compared to 573 from 2009 to 2013. The articles involved researchers from institutions in more than 100 countries. There was also an increasing number of so-called “multiauthor articles” with more than 10 authors from institutions in more than five countries.

In the opinion of Martin Szomszor, head of research analysis at ISI and one of the authors of the report, the rising number of authors reflects a change in the nature of scientific research, which is now increasingly global and collaborative. “Many of these studies are associated with complex themes that require investments in equipment, data collection, analytical processing, and large specialized teams spread across several countries,” he told Pesquisa FAPESP. “The lone researcher is becoming an increasingly less viable model for major scientific innovations.”

Articles with many coauthors from various countries have been common for some time in fields such as particle physics—which was the field with the most hyperauthored articles according to the ISI report. This is primarily due to large collaborative projects, such as those conducted at the Large Hadron Collider (LHC), the particle accelerator operated by the European Organization for Nuclear Research (CERN) on the border of France and Switzerland. In 2015, for example, an article about the Higgs boson published by the Atlas and CMS team (two of the LHC’s main instruments) in the journal Physical Review Letters had 5,153 authors from more than 500 institutions around the world, including Brazil. The article broke the record for the largest number of collaborators working on a single scientific paper. Hyperauthorship is also a relatively common phenomenon in the field of molecular biology and genetics, as highlighted in the report (see table). One of the best-known cases is a study signed by 1,014 coauthors and published in 2015 in the journal Genes Genomes Genetics describing the genome sequencing of the fruit fly (Drosophila melanogaster).

According to Szomszor, data from the past five years suggest the number of papers with large numbers of coauthors is now growing in other fields, such as global epidemiology and space sciences. “Perhaps because these areas are associated with some of the most pressing and complex issues of the twenty-first century, like global warming.” Szomszor also mentions a 2017 paper published in the journal The Lancet on global trends in body mass index, which was signed by more than a thousand authors from more than 100 countries. “It is the type of research that needs global data,” he explains. According to biologist João Carlos Nabout, a researcher at the State University of Goiás (UEG) who studies authorship patterns in the biological sciences in Brazil, the trend toward articles with many coauthors from many countries has the potential to grow further over the coming years. “More and more groups of researchers from different fields are getting involved in multidisciplinary collaborative research into complex, global issues,” he says.

The creation of large international collaborative networks gained momentum in the 2000s and escalated in the following decade. Between 2009 and 2013, for example, the Web of Science database recorded just one new article signed by researchers from more than 60 countries. Between 2014 and 2018, however, that number rose to 49, almost two-thirds of which had authors from more than 80 nations. The combination of many authors from many countries and a complex pattern of authorship that differs from more traditional academic papers seems to be linked to an increase in citation rates. Computer scientist Jesús Mena-Chalco, a professor at the Federal University of ABC (UFABC), believes this may be related to the fact that these studies are often published in high-impact journals with high visibility in the international scientific community. 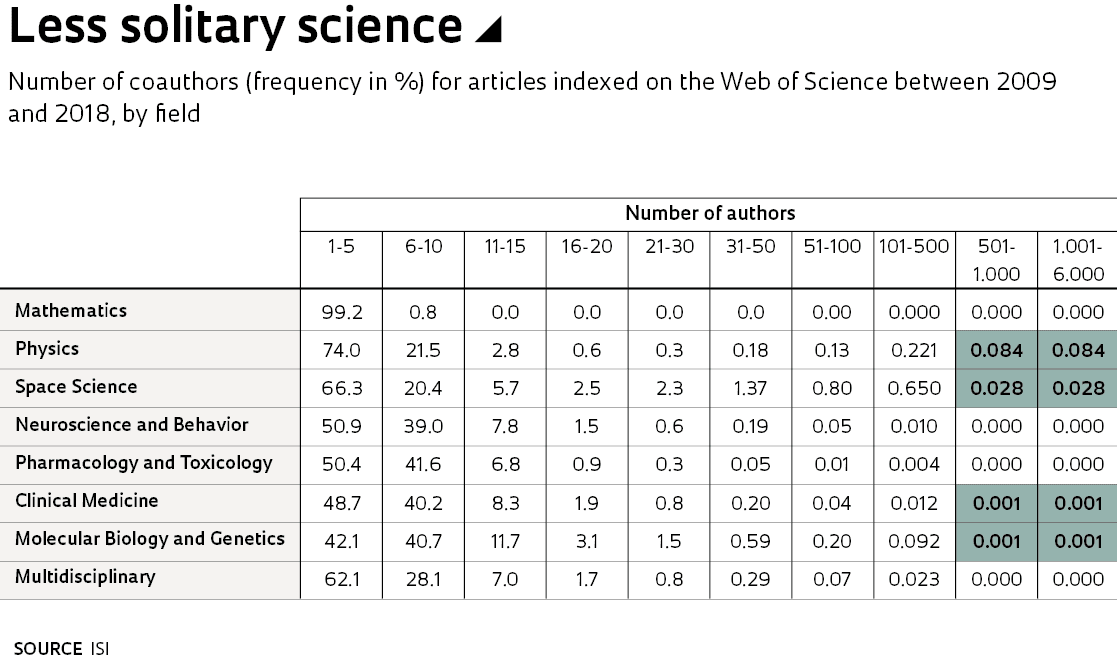 He has been studying the phenomenon of hyperauthorship in Brazil for some time. In a recent survey of 849,805 articles published between 1999 and 2018 by 14,870,000 PhD students who received scholarships from the Brazilian National Council for Scientific and Technological Development (CNPq), Mena-Chalco and his team identified 1,605 articles with a thousand or more authors, all in the area of physics. “The data for Brazil are in line with the global trend highlighted by the ISI report,” he says.

There may be other factors behind the advancement of multiauthored and hyperauthored articles. “It is possible that in some fields, the phenomenon is motivated by cultural habits, such as including senior researchers in research results,” says biologist Jacqueline Leta, from the Institute of Biomedical Sciences at the Federal University of Rio de Janeiro (UFRJ). Leta specializes in scientometry, which seeks to study quantitative aspects of science and scientific output based on bibliometric indicators. Another explanation, according to Szomszor, is the increasing involvement of certain countries, especially those in the southern hemisphere, in international research networks. Chile, for example, was highlighted in the ISI report for having participated in many international collaborations in the analyzed period. According to Leta, this could be related to experiments conducted with the radio telescope network at the Atacama Large Millimeter/submillimeter Array (ALMA) in San Pedro de Atacama, one of the largest astronomical observatories in the world.

The ISI report identified trends, but its conclusions should be treated with caution. The overwhelming majority of the articles evaluated—almost 95% of the total—are signed by 10 or fewer authors. This shows that the scientific literature is still dominated by papers produced by smaller groups. In these cases, it is not usually the number of coauthors that affects the impact of the publications, but whether they are the result of international collaborations. Physicist Carlos Henrique de Brito Cruz, scientific director of FAPESP, conducted a survey of articles with up to 10 authors published in journals indexed in the Web of Science database between 2015 and 2017, and found that Brazilian articles tend to receive more citations when produced in collaboration with researchers from other countries. The impact of these studies can also vary significantly according to the countries involved in the collaboration—Brazilian articles with up to 10 coauthors including researchers from the United Kingdom, for example, can have up to twice as much of an impact as collaborations with Argentinean coauthors (see graph). 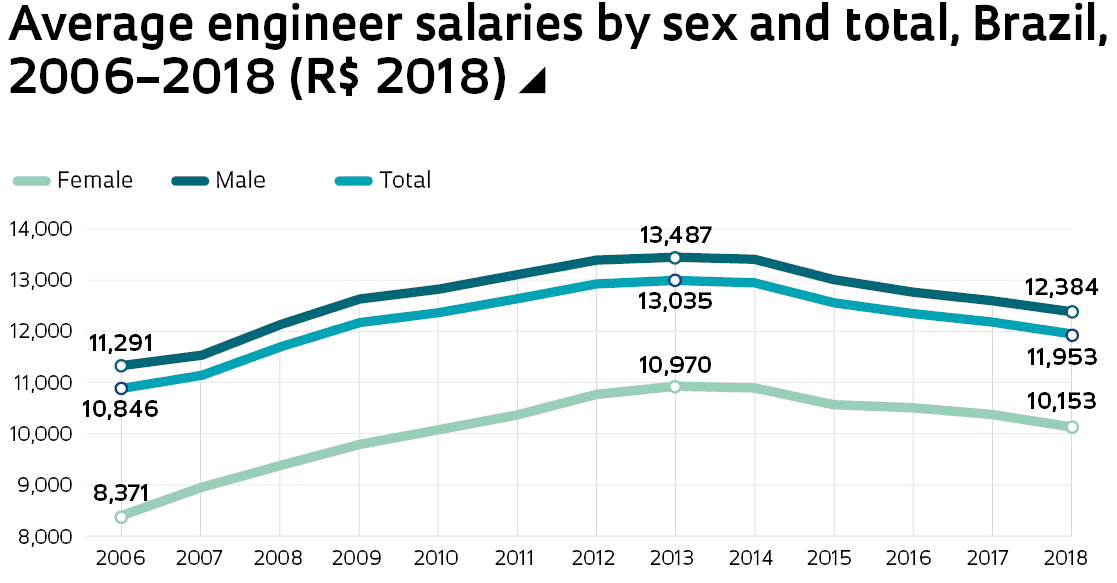 Collaborating with smaller groups of authors has other advantages. According to Samile Andréa Vanz, a professor at the School of Library Science of the Federal University of Rio Grande do Sul (UFRGS), coordinating research with 10 or fewer authors tends to be easier. “The scientists involved often know each other beforehand, which helps create trust and a bond based on their experience and analytical ability,” says the researcher. This type of group also tends to benefit more from new communication technologies. With a smaller group, it is easier to hold virtual meetings to discuss how each member is progressing with their specific tasks.

Vanz is currently working on a research project that aims to evaluate the extent to which articles involving collaborators from multiple countries can affect the position of small universities in international university rankings. “Our preliminary analyses suggest that international collaborations influence the rankings of small, new universities with less research history. Lists based solely on the number of citations can be distorted and collaborations need to be taken into account.”

Leta, from UFRJ, points out that coauthorship is only one of the criteria for assessing scientific collaboration, and there are doubts as to whether this metric is the most appropriate. “It is becoming increasingly difficult to know how much of a role each author played in an article signed by several people,” she comments. “Publishing an article together does not always mean that there was cooperation. There have been cases of scientists adding the names of colleagues in return for favors or to increase the chances of the article being accepted by a certain journal.” There is a heated debate in academia about what criteria should be used to define authorship. “Having your name included on an article implies responsibilities. You are certifying its integrity and should be ready to defend it publicly,” says Nabout, from UEG. “Inclusion as a coauthor should be based on significant involvement in writing the article.”

Some researchers, including Vanz and Mena-Chalco, argue that in addition to the scientist who proposed the original project, the list of coauthors should only include those responsible for one or more of the key steps in the study, such as the original idea, hypotheses, or theoretical interpretations. Those who only contributed to a small part of the study or who are not researchers—technicians, assistants, and other collaborators, for example—should not be included.

Although there are research groups who agree with such recommendations, the topic continues to cause debate. “Many journals already require the author to submit a report alongside the manuscript specifying the participation of every coauthor,” says Mena-Chalco. “But for articles resulting from major projects with thousands of authors from various countries, only the name of the consortiums that worked on the research are listed.” The subject is generating new discussions, not only on the question of scientific integrity, but also the evaluation methods used by supervisory bodies and academic rankings to qualify researchers and their institutions.