For the last decade, Brazil has held the worrisome position of world leader in cesarean sections. The proportion of babies born by cesarean delivery in the country has been growing since the 1970s, surpassing the number of vaginal births in 2009 and remaining the most common method of birth ever since, despite attempts by the government and medical agencies to reverse the trend. Of the 2,903,716 babies born in Brazilian hospitals in 2015, 1,611,788 entered the world via cesarean section. This figure represents 55.5% of all births, an excessively high rate that is topped only by the Dominican Republic, where 56.4% of 172,000 babies are born by cesarean section each year. A high proportion of Brazilian cesareans (48%) may be classed as unnecessary because they are performed before labor begins and therefore before the child is ready to be born. These cesareans, often planned in advance by the obstetrician, may actually endanger the health of the mother and the child rather than protect them.

The largest survey ever performed in Brazil, published online in the journal BMJ Open on August 5, confirms the long-held suspicions of epidemiologists, obstetricians, and pediatricians: elective cesareans increase the proportion of babies born before they reach full term. The conclusion arises from a study coordinated by pediatrician and epidemiologist Fernando Barros, a professor at the Federal University of Pelotas (UFPEL) and the Catholic University of Pelotas (UCPEL). Working with colleagues from Uruguay, the UK, and the Brazilian Ministry of Health, Barros cross-referenced the number of births in Brazil in 2015 against information on the type of delivery, gestational age, and education level of the mother.

The data showed that 1,130,676 babies (39.9% of the total) were born at less than 39 weeks, the age at which maternal and infant health specialists consider the baby ready for life outside the uterus. Of this number, 286,000 were born at less than 37 weeks (premature births), probably due to health problems faced by the mother or the baby, and 844,000 were born in the 37th or 38th week of pregnancy. There is a strong indication that in a third of these cases—a total of 370,000 babies—birth occurred earlier than necessary due to elective cesarean sections.

“Those born at 37 or 38 weeks face a small risk of various health complications that could be prevented by postponing delivery,” says Barros. Because these cases represent such a high proportion of births, the researcher explains that such problems can potentially have a significant impact on the public health system. Researchers at the Karolinska Institute and the University of Uppsala in Sweden monitored 550,000 babies born between 1973 and 1979 for a minimum of 23 years. Their findings, published in Pediatrics in 2010, showed that to a lesser extent than premature births, babies born in the 37th or 38th week of gestation were less likely to complete higher education and more likely to need healthcare services.

“The results of the study are what we expected,” says obstetrician José Guilherme Cecatti, a professor at the University of Campinas (UNICAMP), regarding early-term births in Brazil. Cecatti did not participate in the BMJ Open paper, but, some years ago, he surveyed 33,740 pregnant women in Brazil and identified a high rate of premature births, in part due to the number of cesarean sections being performed. “The merit of the current research is that it shows the extremely high numbers involved in this phenomenon. It shows that a large number of cesareans are being performed too early.” 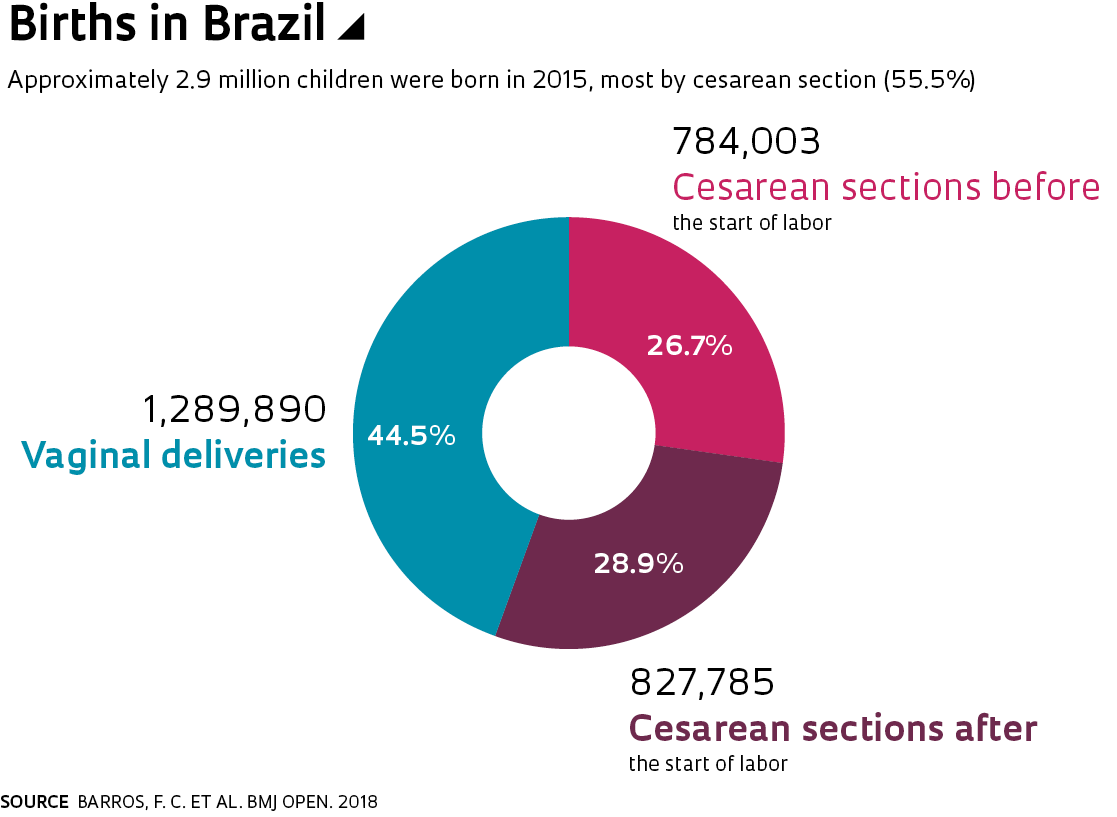 There is one particular finding that reinforces the hypothesis that surgery is often performed with no medical justification. The proportion of cesarean sections conducted before labor begins increased steadily alongside the education level of the mother, which is an indicator of socioeconomic status. Of the 163,000 women with four years of education or less, who are generally poorer and likely face more health problems, 13.2% had a cesarean section before labor. The proportion reached 49.2% among the 528,000 mothers with a university degree, who in theory are more wealthy, healthy, and well informed. “British epidemiologist Julian Tudor Hart called this phenomenon the reversal of care. Those who need the most receive the least,” says pediatrician Marco Antonio Barbieri, a professor at the University of São Paulo in Ribeirão Preto (USP-RP).

“Populational studies suggest that early-term birth as a phenomenon will follow the path of cesareans, initially more frequent among the wealthier classes and now also becoming increasingly common among the poorest,” says pediatrician Heloísa Bettiol, a colleague of Barbieri and a professor at USP-RP. This effect has been noticed in studies that began in Ribeirão Preto in 1978 in the interior of the state of São Paulo. The proportion of babies born by cesarean section in the 37th or 38th week of pregnancy rose from 28% in 1978–1979 to 54% in 1994 and 68% in 2010, according to data that Barbieri and Bettiol presented to the Ministry of Health in 2017. Barros and his colleagues observed a similar association in the Pelotas studies.

In the BMJ Open study, the relationship between cesarean sections and early births was even more evident when Barros and colleagues analyzed 2.5 million births (82.4% of the total) for which they had the best quality information, grouped by municipality. In towns where surgery accounted for more than 80% of births, the number of babies born in the 37th or 38th week was 62% higher than in municipalities where cesarean sections represented less than 30% of births, which is still twice as many as the number recommended by the World Health Organization. The probability of a baby being born premature was 22% higher in the first group of towns than in the second group.

Obstetricians and pediatricians have always been more concerned about premature babies born at less than 37 weeks, who are at the greatest risk of health problems. More recently, however, research has suggested that those born at 37 and 38 weeks, known as early-term births, also face an increased risk of health complications in the first few weeks of life and moderate cognitive development problems in later years. “Early-term births never received much attention because babies were considered old enough to be born at that age,” says Barros. “However, they would benefit from another one or two weeks in the womb.” 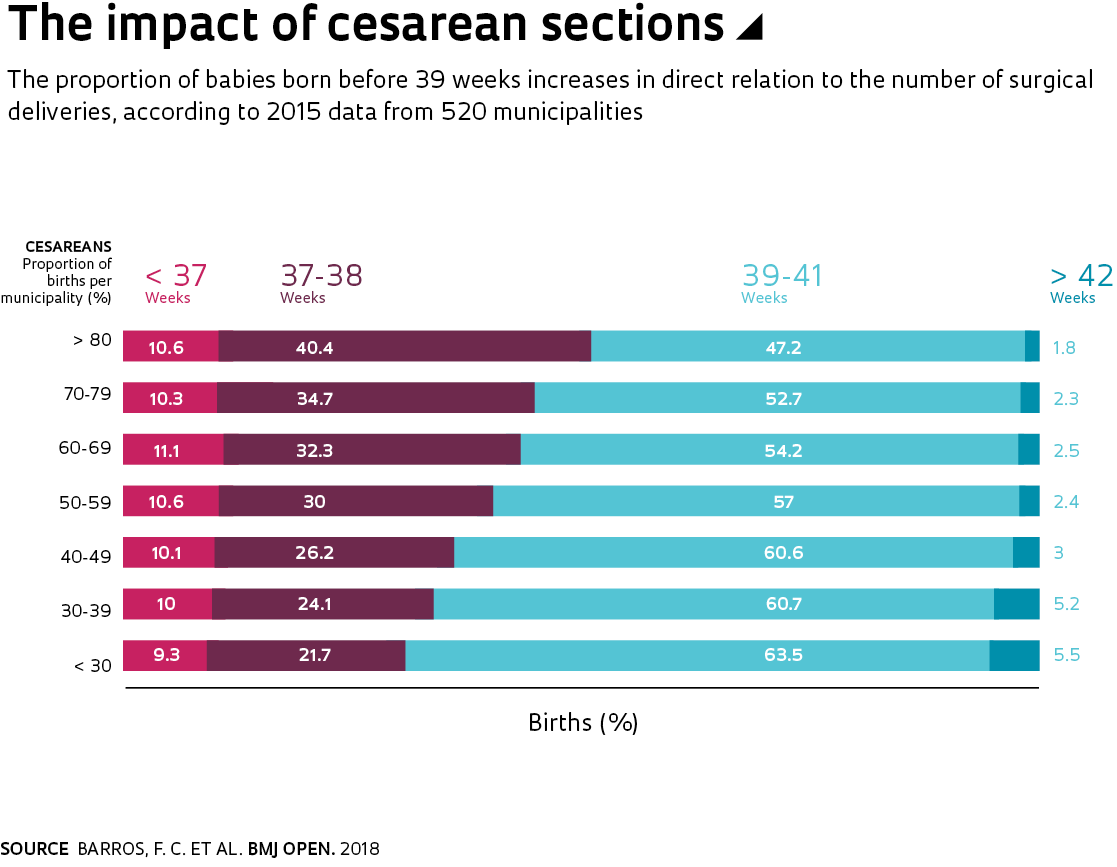 A common problem for babies born between the 34th and 37th weeks of pregnancy is that their lungs—one of the last organs to mature—are not yet fully prepared to breathe. Premature babies are thus at greater risk of respiratory distress, often requiring oxygen supplementation and treatment in intensive care away from their mother. According to pediatrician Maria Augusta Gibelli, head of the neonatal ICU at the USP teaching hospital, premature babies may not have developed the ability to properly breastfeed, which can lead to low blood-sugar levels, requiring supplementary formula made from cow’s or goat’s milk in their first few days of life.

Epidemiologist Maria do Carmo Leal, a professor at the National School of Public Health in Rio de Janeiro, quantified these risks based on information from 12,646 premature babies born in 266 Brazilian hospitals in 2011 and 2012 and monitored for at least 45 days. Published in BMJ Open in December 2017, her analysis of the representative sample confirms that an additional week or two in the womb can make a significant difference.

Even healthy babies born at 37 or 38 weeks had a low but greater risk of complications in their first few hours and weeks of life than those born at 39 or 40 weeks. From the first group, 3.9% had to receive oxygen after delivery, compared to 2.1% in the second group. A similar proportion required bili light therapy in the first three days of life to neutralize excess bilirubin, a protein that is toxic to the central nervous system. Low glucose levels, known as hypoglycemia, were three times more common among infants born at 37 or 38 weeks (0.9%) than among those born at 39 or 40 weeks (0.3%).

Complications were much more likely when babies in the first group were born due to early obstetrical interference, such as an elective cesarean section when neither mother nor baby were suffering any health problem. This was true in just under half of the cases and tripled the need to receive oxygen (from 1.3% in babies born at 39 or 40 weeks to 4.5% in those born at 37 or 38 weeks), more than doubled the chance of needing treatment in the ICU (from 1.5% to 3.6%), and increased the risk of dying in the first month of life by nine times (from three deaths per 10,000 births in the first group to 26 per 10,000 in the second). “In Brazil, these early interventions are especially common in private hospitals,” says Maria do Carmo, who described this phenomenon in a paper published in the journal PLOS ONE in 2016.

The skin as a marker of time 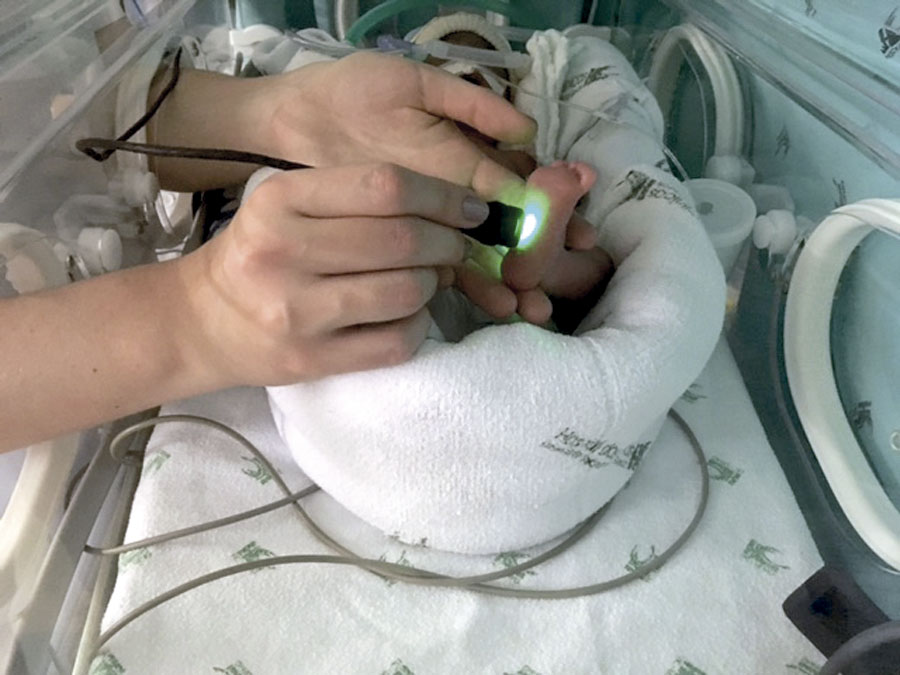 In October, researchers will begin a new study of 790 Brazilian newborns to test the efficiency of a device that estimates the gestational age of a baby at birth based on the light reflected by its skin. The device, which looks like a small flashlight, was developed by researchers at the Federal University of Minas Gerais (UFMG). It uses LEDs to emit low-intensity light and a sensor to capture what is reflected. A mini-processor then uses this information and the baby’s weight to calculate how long the infant spent in the womb—the longer the gestation period, the thicker the skin is and the more light it reflects.

Knowing the developmental time (gestational age) of a baby can help doctors provide the best medical care after birth. “Using this information, especially in the case of premature babies, pediatricians decide if the baby needs respiratory support and temperature control or treatment in a neonatal unit,” explains gynecologist and obstetrician Zilma Reis, a professor at UFMG who developed the device, called Skin Age, with astrophysicist Rodney Guimarães. “Even in Brazil, which has free and universal access to health services, physicians do not always have reliable information about the gestational age of the infant,” says Reis.

She and Guimarães began looking for a noninvasive way to determine the age of newborn babies in 2014, after the Bill & Melinda Gates Foundation issued a call for research proposals on the subject. They were inspired by the oximeter, a device that estimates the oxygen saturation level of blood using a light that passes through the skin. “The aim was to create a simple device for situations in which prenatal exams have not provided adequate information about the baby’s age, or when there is no pediatrician available to calculate it after delivery,” she says.

With US $100,000 from the Gates Foundation and US $50,000 from the Minas Gerais State Research Foundation (FAPEMIG), Reis and Guimarães analyzed how the skin of the fetus changes and reacts to light during pregnancy, as well as developed initial prototypes and performed clinical tests that provided proof of concept. Applied to the forearm or sole of the foot for just a few seconds, Skin Age estimated the gestational age of 115 babies born in two hospitals in Belo Horizonte with a margin of error of 11 days, according to data published in the journal PLOS ONE in 2017.

With funding from the Brazilian Ministry of Health, the group now plans to test the equipment on 790 children from Minas Gerais, Rio Grande do Sul, Maranhão, and Brasília. “We want to use the data
to improve the equipment and reduce the error to 7 days,” says Reis. A second clinical trial, funded by FIOCRUZ and Grand Challenges Canada, is planned for the next year, involving 400 children from Brazil, Portugal, and Mozambique.