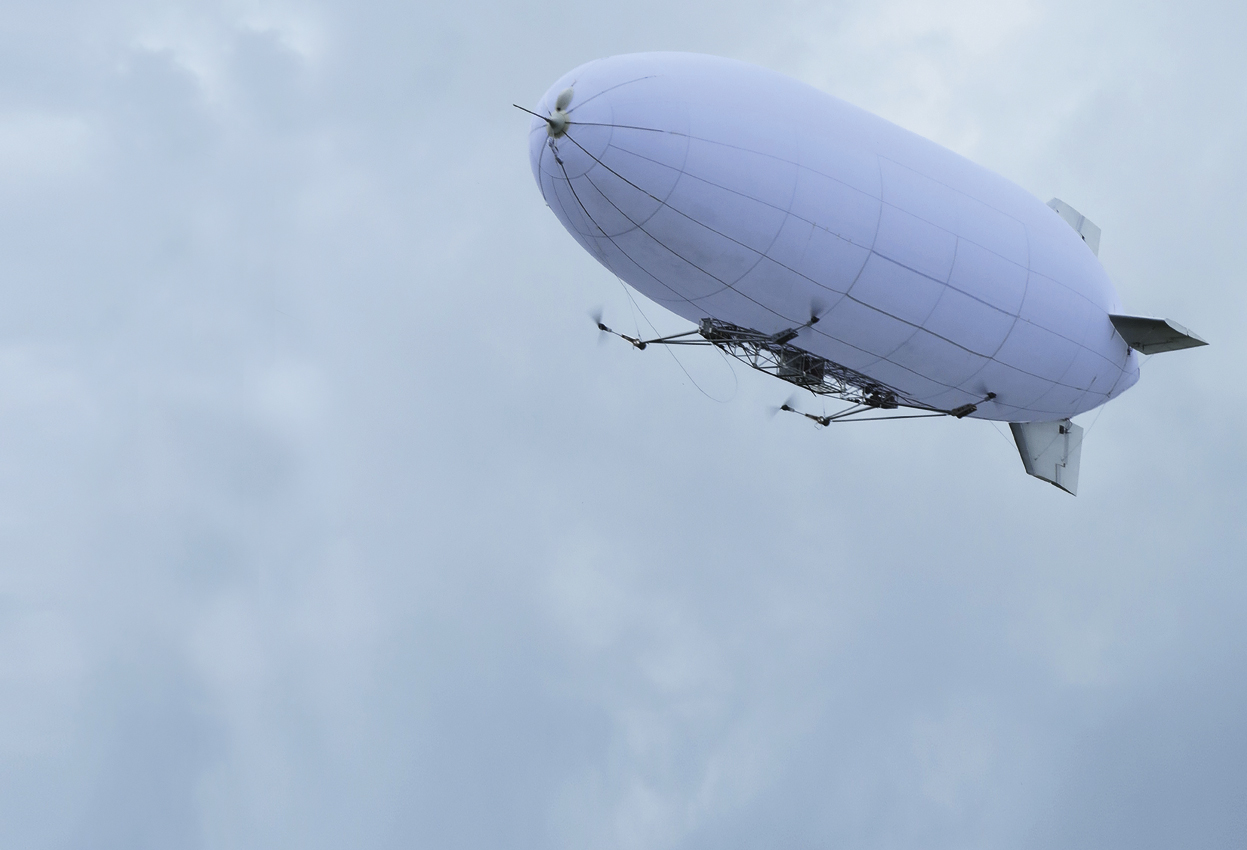 When flying slowly at low altitudes over an Amazonian forest in the region of Mamirauá, the blimp Noamay will locate and capture signals emitted by radio collars on monkeys and jaguars. Using sensors, this aircraft may also collect data on the air and soil. The unmanned airship, which measures 11 meters (m) long and 2.50 m in diameter at its widest point, was designed to fly unguided along a predefined path or be controlled remotely by a pilot on the ground. “We took the first flight in remote-control mode on March 3 from a runway in the city of Balsa Nova, Paraná,” says electronic engineer Samuel Siqueira Bueno, the researcher at the Renato Archer Center for Information Technology (CTI), a part of the Brazilian Ministry of Science, Technology, Innovation and Communications (MCTIC) in Campinas, which headed Project DRONI (an acronym for “Innovative Concept for a Robotic Dirigible”).

Noamay (which means “care and protection” in the indigenous Yanomami language) will begin operation during the second half of this year at the Mamirauá Sustainable Development Institute (IDSM, a social organization linked to the MCTIC), which also participated in Project DRONI. The Institute works in the Mamirauá and Amanã ecological reserves, which total 3.4 million hectares. Project DRONI was funded by the National Science and Technology Council (CNPq) from 2014 to 2017.

The blimp has an important innovation, according to Bueno: four electric motors with propellers are installed so that they rotate 360° and operate independently, allowing the craft to take off and land vertically, hover in the air, and maneuver. “This new system, which we call multidimensional vectorization, permits more precise control of the aircraft on its three axes, which facilitates hovering even in the presence of side winds. This groundbreaking system makes it easy to control the airship at low speeds, and consequently, we are preparing patents to be filed in Brazil and abroad,” explains aeronautical engineer Christian Amaral, a partner at Omega AeroSystems, the company in Campo Largo, Paraná, that designed and built the airship and was also part of Project DRONI. Amaral explains that airships are more useful than drones in some situations because they can fly for longer, carry much larger loads, and hover more stably. Drone batteries generally last no longer than half an hour.

“For now, the blimp can fly autonomously for an hour, but in the future, we will be able to keep it in the air for even longer, sustained by helium gas and battery-powered electric motors,” explains Bueno. For the sensing equipment to be carried on the airship, he adds, “we could install an antenna and a receiver to locate and track animals that have radio collars, cameras in different spectrum bands, a LIDAR laser [for light detection and distance measurement] for mapping the ground and trying to find ruins due to ancient humans, or other sensors to measure the composition of the air over the forest.”

Noamay has high-capacity lithium-polymer (LiPo) rechargeable batteries. Without helium gas and carrying only the equipment necessary to fly, the blimp weighs approximately 38 kilograms (kg) and is able to carry an additional 6 kg. When empty and folded, the inflatable body of the blimp (known as the envelope) fits inside a large suitcase.

A multipurpose platform
Another challenge for researchers is to finish developing Noamay’s pilotless control system. “In 2002, we completed the development of an autonomous flight system for our first airship, which was purchased abroad in 1998,” says Bueno, who directed Project AURORA (Autonomous Unmanned Remote Monitoring Robotic Airship) (see Pesquisa FAPESP issue no. 84). The aircraft was controlled by an onboard computer and sensors. “With this system, the airship was able to cruise on its own, but takeoff, landing, and hovering were controlled by a pilot on the ground,” he says.

Establishing of overall control, which includes taking off, hovering over a chosen point, landing, and even autonomously determining the route and mission based on data captured by the airship, requires methods that are still being developed in simulations for later testing. “Automatic pilot methods for airships that perform all these phases of flight do not exist anywhere in the world. As a result, we have several graduate students involved in these studies,” says the researcher. In addition to the CTI, Omega, and the IDSM, the following universities are participating in the project: the Federal University of Amazonas (UFAM), the University of Campinas (UNICAMP), the Brazilian Air Force Technical Institute (ITA), and the Superior Technical Institute of Lisbon in Portugal. This multi-institutional collaboration is continuing research and applications relating to Noamay within the National Institute of Science and Technology for Cooperative Autonomous Systems (INSAC).

Electrical engineer José Reginaldo Hughes Carvalho, a professor at the Institute of Computing at UFAM, says that Noamay could be transformed into a multipurpose platform that is a safer and cheaper alternative to manned flights (for tracking animals and collecting environmental information) as well as for data acquisition because it offers wider coverage than fixed sensors. “The difference is that it is quiet and simultaneously flexible, able to hover over one point of interest and proceed to the next,” he adds.

The blimp requires 40 cubic meters (m3) of helium. This gas can be purchased in cylinders in Tefé, the city that houses the Mamirauá Institute. The average price is R$120.00 per m3, which means it costs R$4,800.00 to fill the airship. “We are designing a reservoir of synthetic material to store the gas and not lose it, in case it becomes necessary to drain the blimp’s envelope,” explains Omega’s Amaral. In the future, the company intends to produce this type of aircraft on a larger scale. “The world market for airships, whether remotely piloted or autonomous, for environmental and sensing applications is still in development and represents major potential for expansion in the medium and long term.”