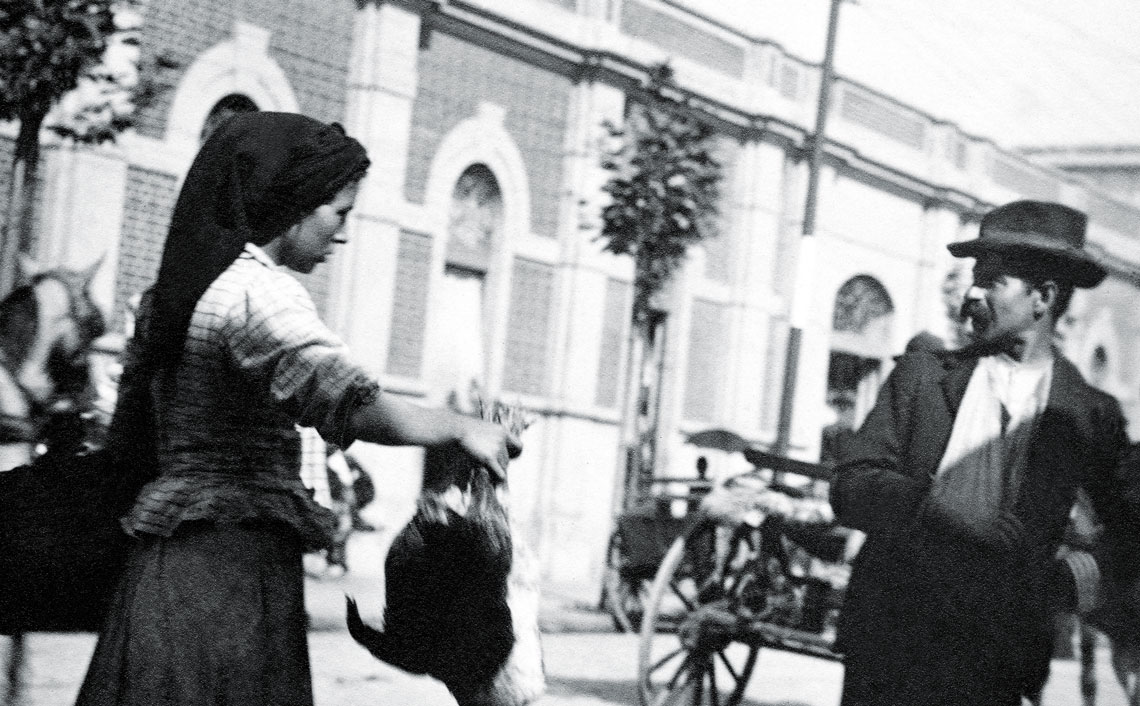 A woman selling chickens in downtown São Paulo in 1910, when the government began regulating food commerce

From humans’ harnessing of fire to the advent of fast-food restaurants, dietary habits can provide clues about different societies’ ways of life over time. Recent studies have revealed how patterns in food and beverage production, marketing, and consumption both shaped and were shaped by political, economic, and cultural changes in Brazilian cities between the eighteenth and twentieth centuries. The papers illustrate how food history, a relatively new field of research (see sidebar), can provide insight into aspects poorly explored by traditional historiography, which often pays little attention to such a mundane activity as eating. In recent years, explains Leila Mezan Algranti of the Institute of Philosophy and Human Sciences at the University of Campinas (IFCH-UNICAMP), new research has shed light on local nuances of urbanization and metropolization processes in Brazil. “These studies delve deeper than just finding out what people ate in the past,” says the historian, a pioneer in the field in Brazil.

The practice of eating out is a good example of how economic dynamics created new eating habits in eighteenth-century São Paulo City. As trade intensified and new ports were built in 1808, products such as pasta, cheese, sausages, and dried fruits were introduced into the diets of the city’s wealthy, who could afford to savor these foods in casas de pasto—the precursors of modern restaurants—and in taverns more sophisticated than those frequented by the less affluent. “Around 1820, the upper classes began venturing out of their homes to frequent public eating establishments, attracted by the possibility of varying their daily menus and enjoying moments of leisure and social interaction,” explains historian Rafaela Basso, who explored the subject in a doctorate thesis she recently defended at UNICAMP.

The period she investigated, between 1765 and 1834, was marked by profound changes in São Paulo, including the restoration of the city’s administrative independence after 17 years of subordination to the Rio de Janeiro government. “The new administration began efforts to reorganize and promote trade and agriculture,” says Basso. “In the city, small food businesses began to flourish and to attach new meanings to food.” By the turn of the nineteenth century, she says, the city was integrated into vast food supply chains. Goods were imported from Europe via the Port of Santos, to satisfy the tastes of the elite and newly arrived Europeans.

The bustle of people on the streets of the provincial capital led to the emergence of facilities to cater to their needs, says Basso, who investigated the early commerce of food products in the city and the beginnings of Mercado das Casinhas, the first public marketplace in São Paulo for products such as corn, beans, flour, and pork. City Hall documents the historian researched reveal complaints from residents about garbage and litter left by street vendors, for whom the increasing flow of pedestrians was an opportunity to market their goods. The discontented residents complained of meat and fish leftovers strewn on the streets, and obstacles blocking their passage.

Measures to organize food markets and contain the proliferation of street vendors would only be implemented in the early twentieth century, says historian Francis Manzoni, author of the book Mercados e feiras livres em São Paulo (Indoor and open-air markets in São Paulo; Edições SESC, 2019), which explores the development of public markets between 1867 and 1933. “São Paulo’s demographic growth with the arrival of migrants from Europe and other parts of the country created new demand for housing, food, and transportation,” explains Manzoni. “Organizing the city’s food supply became one of the government’s priorities.” The solution was to build indoor markets to accommodate street vendors and keep them off the streets.

In practice, however, only those who could afford the stall fees were accepted in indoor markets, mostly European immigrants who had previously plied the trade. Blacks, caipiras (country folk), and poor whites continued to sell their goods on the streets, illegally. But food prices and the overall cost of living soon began to increase in São Paulo—an effect of rising real estate prices and the collection of market stall fees and taxes on certain products. Street vendors were eventually accommodated in open-air markets created by Mayor Washington Luís (1869–1957) in 1914, says Manzoni, as part of a strategy to regulate food commerce by charging lower fees than those for indoor market stalls. The institutionalization of open-air markets, explains the researcher, allowed vendors to pay more reasonable fees and offer food at more attractive prices than those in market halls. Manzoni also notes the hygienist undertone to the efforts to create public markets in São Paulo. “During the coffee economy, city expansion was modeled after large European cities as an ideal of civilization,” he explains. “In order to “clean up” the city’s streets, and remove blacks and the poor from its sidewalks, eugenic ideas were put into practice.” 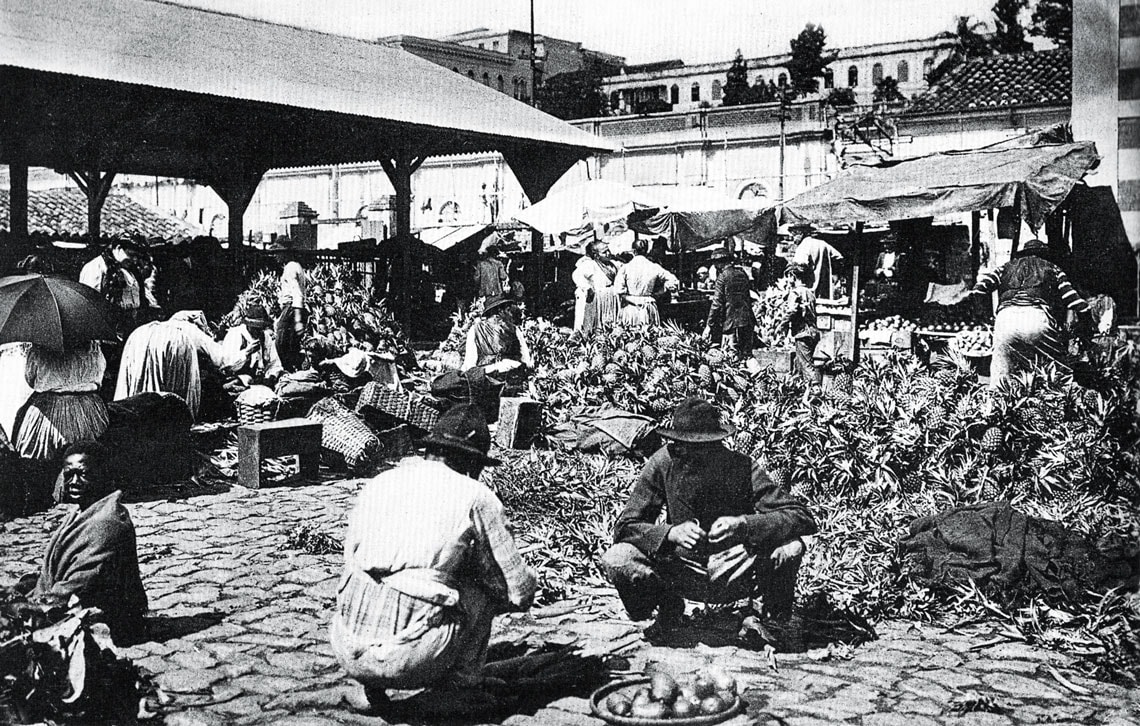 Workers in the inner court of a market on Rua 25 de Março: the facilities were built to keep street vendors off the streetsFrancis Manzoni Archives

Foods such as rice, beans, corn, cassava, cabbage, pork, and dried meat were all part of the city’s diet at that time, says the historian. Some had been a staple since the pioneering Bandeirantes expeditions in the sixteenth century. “The triad of São Paulo cuisine—cassava, beans, and corn—had its origins in indigenous cultures. The Bandeirantes, most of whom were of mixed indigenous and Portuguese ancestry, learned to survive in the forests and to eat foods that were readily available from hinterland plantations. They also learned to eat wild animals like armadillos, pacas, deer, monkeys, snakes, larvae, and ants, as well as wild fruits.”

It was only at the turn of the twentieth century that São Paulo’s cuisine was further expanded by European immigrants. Italians were largely accountable for the introduction olive oils, sausages (such as baloney and salami), olives, pasta, polenta, tomato sauce, breads, cheeses, and antipasti, while the Portuguese introduced the production and consumption of pork and pork products. “Immigration played a key role in diversifying the foods people ate in Brazil, including foods not previously grown in the country,” says Manzoni.

The transformations in the city also had an influence on São Paulo’s Iberian-styled taverns, where alcoholic beverages and snacks were served. “The city’s taverns, largely owned by Portuguese, eventually succumbed to successive urban reforms, expropriations, and real-estate speculation,” says Daisy de Camargo, who explored the subject in her doctoral thesis in history at São Paulo State University (UNESP). During a trip to Spain, the historian was surprised to find that taverns in Madrid, some dating back the mid-nineteenth century, were still in business. “I decided to investigate how local eating habits survive the relentless advance of globalization,” explains Camargo, who delved into the subject during a postdoctoral internship at the Federal University of São Paulo (UNIFESP). She documented her research in the book Fale com eles – Uma leitura das tabernas da cidade de Madri a partir da história da alimentação (Go talk to them! – An exploration of Madrid’s taverns from a food-history perspective; Alameda, 2019).

Camargo sees the taberna culture as a form of resistance to today’s hurried lifestyle and standardized foods. The cocido madrileño, a typical dish served in Madrid’s taverns, takes hours to prepare and varies regionally in its ingredients. “Fast food came as a response to today’s hurried urban lifestyles. To streamline production and consumption, chains like McDonald’s created menus with very few variations,” she observes. For Camargo, Madrid’s taverns have endured because of, among other reasons, their status as symbols of political resistance in difficult times in Spain’s history. “Tienda de Vinos, a tavern founded in 1888 and still in business, survived more than just the Happy Meal,” she notes. In previous years, between 1939 and 1975, it served as a meeting place for socialists and trade union members who fought against General Francisco Franco’s (1892–1975) regime.

Unlike Madrid’s taverns, which succeeded in their resistance to culinary homogeneity, at least one major city in Brazil saw its eating habits significantly change under the influence of US culture in the early twentieth century. During that period, the northeastern city of Recife experienced a wave of Americanism, fueled first by Hollywood in the 1930s and, in the following decade, at the height of World War II, by the presence of US military bases in northeastern cities. “People in the city were regularly in contact with Americans who wandered around the city with showy uniforms, jeeps, and dollar-filled wallets,” says historian Francisco de Oliveira Toscano, who investigated the phenomenon in a doctoral thesis he defended at the University of São Paulo (USP). “Many of the city’s residents initially viewed those soldiers—who drank Coca-Cola straight from the bottle and ordered whiskey in the city’s bars—with suspicion. But suspicion soon gave way to admiration, and eventually most people were keen to imitate the gringos,” he explains.

Documents he researched from the period show that Recife’s elite quickly adopted new and American ways of partying and entertaining guests at their homes: formal banquets around dining tables were replaced by American-style cocktail receptions, where canapés were offered that guests could eat with their hands. Sandwiches, a British invention popularized by Americans, were also introduced. “Hot dogs became popular at fairs and festivities,” says Toscano, who spent six months in the US researching documents in Washington. There, he found records of military shipments of supplies to Brazil.

For Toscano, the history of food in Recife provides insight into the cultural evolution of both the elites and the masses. “It shows how local eating habits have been modulated by foreign cultures, and provides a critical view of how much our society can be influenced by what is served on the dinner table,” says Toscano. The history of food plays another important role, adds Manzoni. “That of putting a spotlight on characters forgotten by history books, such as market and street vendors.”

Early research into the history of food dates back to studies in the mid-1960s by European historians such as Jean-Louis Flandrin (1931–2001) and Fernand Braudel (1902–1985), of France. In Brazil, the field gained prominence in the late 1990s with the publication of a review of scientific literature in the Proceedings of Paulista Museum, in 1997. In the article, historians Ulpiano Toledo Bezerra de Meneses and Henrique Carneiro, both of USP, describe some of the attributes of food history as a field of research.

“While historiography about Brazil has not failed to take food into account, it has almost always done so as a footnote,” wrote the authors, citing the book Caminhos e fronteiras (Paths and borders; 1957) as an example. In this work on Brazil’s territorial expansion by the Bandeirantes, historian Sérgio Buarque de Holanda (1902–1982) dedicates a chapter to what he describes as a “corn civilization.” “The history of food is very much a territory still to be discovered,” they conclude.

The article has become a landmark in the field in Brazil, says historian Leila Mezan Algranti of UNICAMP. “Twenty-three years later, it is still widely cited. Meneses and Carneiro helped to make food a primary object of study in some graduate programs,” she says.