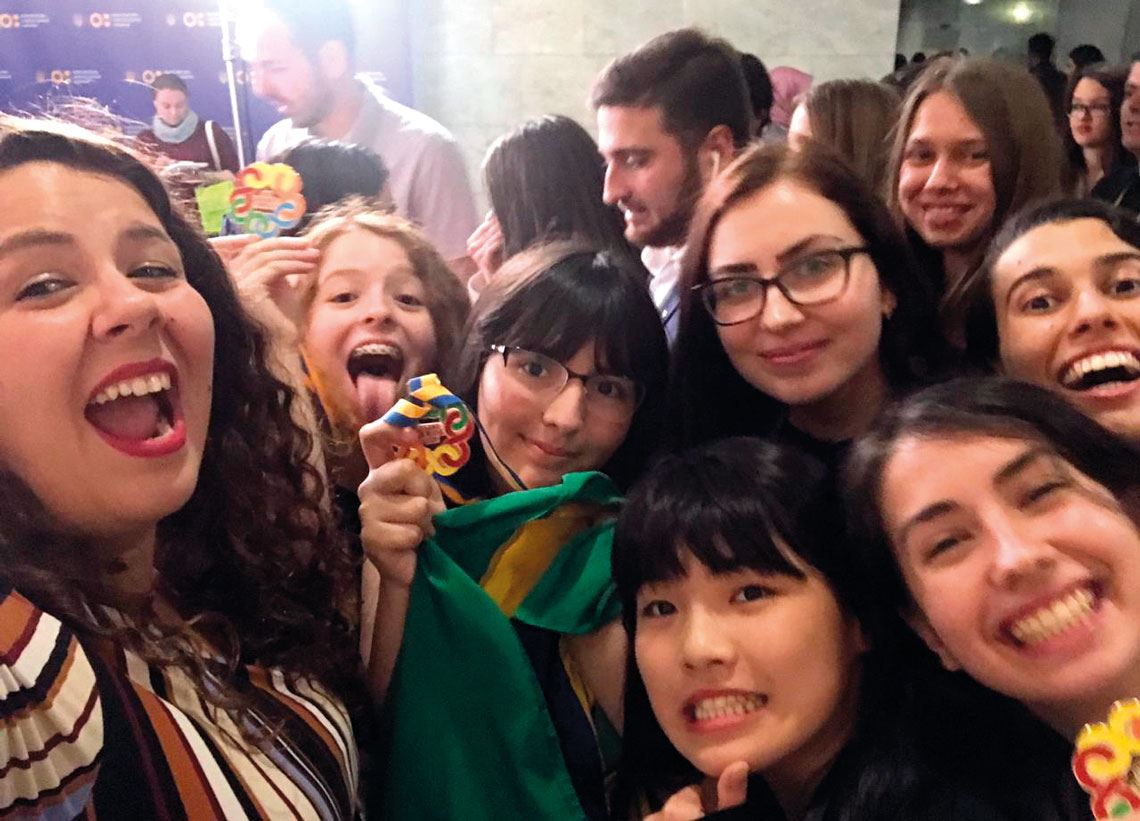 The Brazilian team at the Girls’ Olympiad in Kiev: first-time gold medal

“The tournament aims to reach girls from all over the country and be an additional incentive for those interested in the subject,” explains IMPA Director-General Marcelo Viana. One of the goals of the initiative is to try to prevent the waning of girls’ interest in mathematics throughout their school life, as is the case today in Brazil. At the 2018 OBMEP, for example, only 30% of the medalists in elementary school were female, and the proportion was even lower—at approximately 20%—among high school participants.

However, the overarching goal is broader: It is about creating a more welcoming environment and network for math-loving female students, far from the stereotypes that, both in school and in society at large, attribute to women a natural ineptitude in the subject—which explains the huge predominance of men among the field’s professionals and researchers. “It is not our intention to use knowledge to separate women and men but to create a stimulating environment for women, as the disparity in the area leads them to become discouraged and pursue other fields,” says Viana. 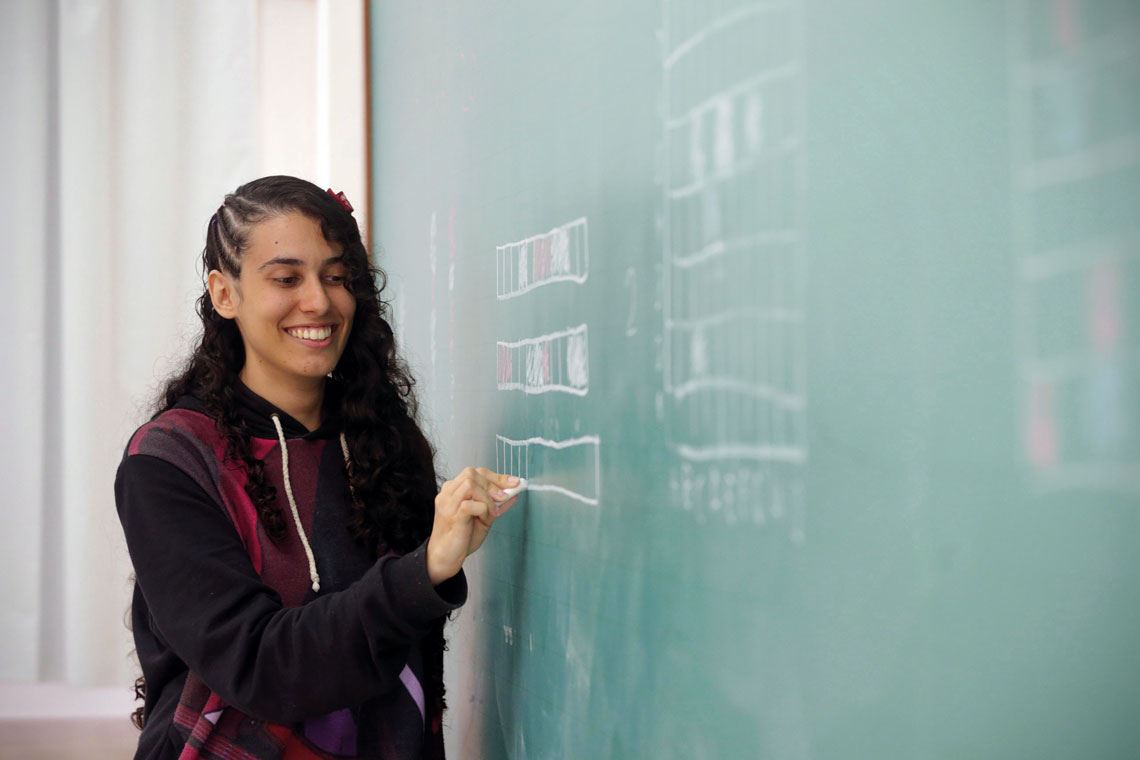 Data from the Educational, Scientific and Cultural Organization (UNESCO) indicate a male prevalence of 65% in science, technology, engineering, and mathematics (STEM) fields. In the field of mathematics, the problem is particularly pronounced. For a recent example, there were only 60 women among the 594 students from over 100 countries who participated in the 2018 International Mathematical Olympiad held in Romania. Since 1936, the International Mathematical Union has awarded the Fields Medal every four years to up to four mathematicians under 40 years old whose contributions to the subject have been deemed outstanding. Only one woman, Iranian American Maryam Mirzakhani (1977–2017), was among the 60 medal winners in 2014. She was barely able to accept the award in person, as she was being treated for the cancer that would kill her three years later. The contrast is stark even at IMPA, where out of 48 researchers, only one is a woman: Carolina Araújo, an algebraic geometry specialist with a PhD from Princeton University in the United States.

The group that will represent Brazil at the 9th European Girls’ Mathematical Olympiad (EGMO), which will take place in the Netherlands in April 2020, will be chosen from among the medalists of the Girls in Mathematics Tournament. EGMO was established in 2012 with the intention of creating a separate track for girls who are interested in math. IMPA organized Brazil’s participation at EGMO for the last three years and was in charge of preparing the student delegations. In the 8th year, held last April in Kiev, Ukraine, Brazil won an unprecedented gold medal as well as two bronze medals. The team was made up of Mariana Bigolin Groff, 17, from Frederico Westphalen (Rio Grande do Sul); Ana Beatriz Studart, also 17, from Fortaleza (Ceará); Bruna Nakamura, 16, from Indaiatuba (São Paulo); and Maria Clara de Lacerda Werneck, 17, from Rio de Janeiro. Overall, Brazil ranked 20th out of 49 countries.

Training for the Girls’ Olympiad is based on the same model as that of OBM participants: there are face-to-face meetings with mentors and, above all, long study and practice sessions. Most high-performing students, who often have scholarships, are drawn to schools with activities geared toward these competitions. For girls, the preparation is more thorough. Two young mentors who graduated recently help encourage the students. “Today, I mentor six high school girls in preparation for the Olympiad. Even from a distance, I have regular conversations with all of them, both as a group and individually. The focus is on keeping them excited,” says 26-year-old computer scientist Deborah Alves, one of the leaders of the team that won in Ukraine. After spending five years in the United States, where she studied mathematics and computer science at Harvard University and worked for a tech company, Alves returned to Brazil in 2017 and helped create a startup that connects family doctors with companies that wish to provide health care to employees but do not offer health plans.

“There are already few girls in the first Olympiad cycles and in the training sessions offered by OBM, and the number is likely to decrease further in subsequent cycles. They end up feeling lonely and inferior,” shares Rio de Janeiro mathematician Luize D’Urso, 22, who also mentored the Brazilian team at EGMO. “So we make an effort to video call them often in order to encourage them to study and give them advice. In other words, we treat them in a more personalized and motivational manner.” Luize D’Urso’s guidance of the team was backed by her credentials as a seven-medal winner at OBMEP at both the elementary and high school levels, all earned while attending a military school. D’Urso graduated in mathematics from the Pontifical Catholic University of Rio de Janeiro (PUC-Rio) in 2018; she was the only female freshman in her class. This was no surprise to D’Urso since, during her training for OBMEP, she saw many girls drop out of math courses and training in general due to lack of encouragement from their families. “Many parents do not like that their daughters study math at a competitive level and want them to dedicate more time to other subjects when they are about to be admitted into college. Boys, on the other hand, are more often encouraged to pursue logical thinking and mathematics. It is a structural problem; often even teachers cannot treat boys and girls equally,” she claims.

D’Urso is currently pursuing a master’s degree at PUC. As an illustration of how small the world of women in mathematics is, her advisor is Carolina Araújo, the only female researcher at IMPA. D’Urso is also leading a project called Math for Girls, which recruits elementary and high school female students from Rio and teaches them logic on Saturday afternoons in a room provided by PUC. “We are missing out on a lot of girls who could contribute to our team at the International Mathematical Olympiad and even to science in general. Participating in competitions encourages them to pursue careers in the fields of exact sciences, math, physics, or engineering,” explains D’Urso. 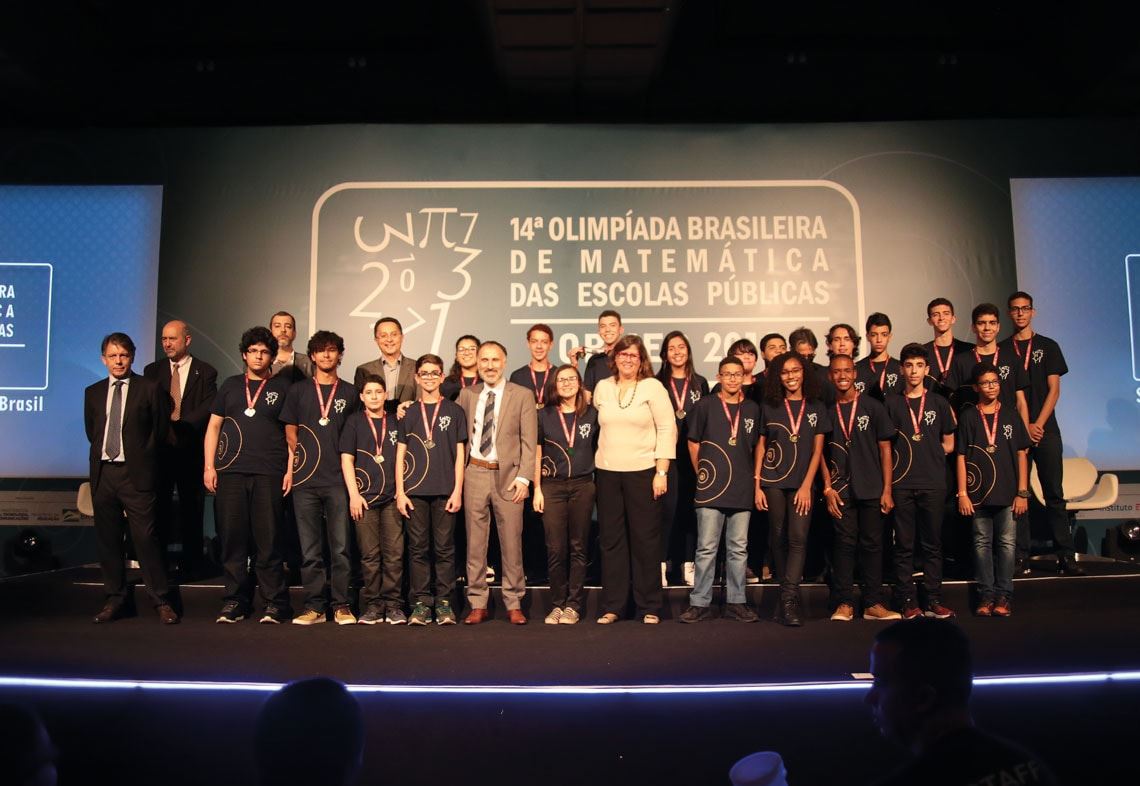 The unprecedented gold medal at EGMO in Kiev was an achievement by Rio Grande do Sul’s Mariana Bigolin Groff, 17. A winner of six medals at OBMEP, she left the small town of Frederico Westphalen, on the border of Santa Catarina, to live in three capitals in as many years—Porto Alegre, São Paulo, and Fortaleza—so that she could attend schools that offered her scholarships. Today, she goes to Colégio Farias Brito, in the capital of Ceará, which provides housing and food for her and other scholarship beneficiaries. Currently, Groff feels fine about living far from her family. However, four years ago, when she left Porto Alegre to live in São Paulo, she missed them so much that she returned to Frederico Westphalen. “I was very young, and after a year, I wanted to go home. The experience pays off, but it requires maturity,” says Groff, whose journey began in the 7th grade, when she first competed at OBMEP. At EGMO, she won bronze and silver medals in 2017 and 2018, respectively. Her gold medal in Kiev marked the end of her Olympiad participation in high school.

Groff shares that she felt intimidated when participating in mixed Olympiad training. “I was the only girl in a 35-student preparatory class for OBM. Sometimes the boys would meet in a hotel room to play, and I didn’t want to go. I didn’t feel welcome, and I wondered if I really should be there.” Joining the all-female group that competed at EGMO made her feel more comfortable. “We saw that we were not alone and became more confident that we belonged there too,” she explains. For the future, she intends to go to college in the United States, but she hasn’t chosen her major yet. “In the American university system, undergraduate students first take a common core of generic subjects. You don’t have to go already knowing what you are going to study,” she says.

Ceará native Ana Beatriz de Castro Studart, 17, brought home a bronze medal from the Kiev EGMO after having won a silver medal in 2018. While attending the 6th grade at Colégio Militar de Fortaleza, she began participating in math, physics, and robotics competitions. The following year, she represented Brazil at the Rioplatense Mathematical Olympiad, which brings together students from various Latin American countries in Argentina. Later, she was offered a scholarship at Colégio Farias Brito, the same school that Mariana Groff attends. The institution, located in Fortaleza, is known for investing in preparation for exact science olympiads. Some of Studart’s friends told her that it was better to not try at all than to make mistakes. When the opportunity arose to compete at EGMO, she wondered at first whether she should do it. “I wasn’t sure if I wanted to participate in a gender-divided Olympiad because at the time I still didn’t understand how important that is.” She plans to study abroad: “I have a specific interest in mathematics applied to biological research, so I’d like to get deeper into that.”

Marcelo Viana, of IMPA, clarifies that while the effort to include more women in international competitions does seek to diversify the area of mathematics and encourage talents that could help the country’s development, those are not the only reasons. “We do not want to prioritize mathematics over human or biological sciences. Philosophy, sociology, biology, history, and other such sciences are essential for the country’s growth and for the education of our citizens,” says Viana. “But we cannot accept that an archaic, sexist culture continues to segregate women from the exact sciences and mathematics in particular. It is very difficult to erase the sociocultural factors that foster this phenomenon, but it is our obligation to fight against this disparity,” he adds.