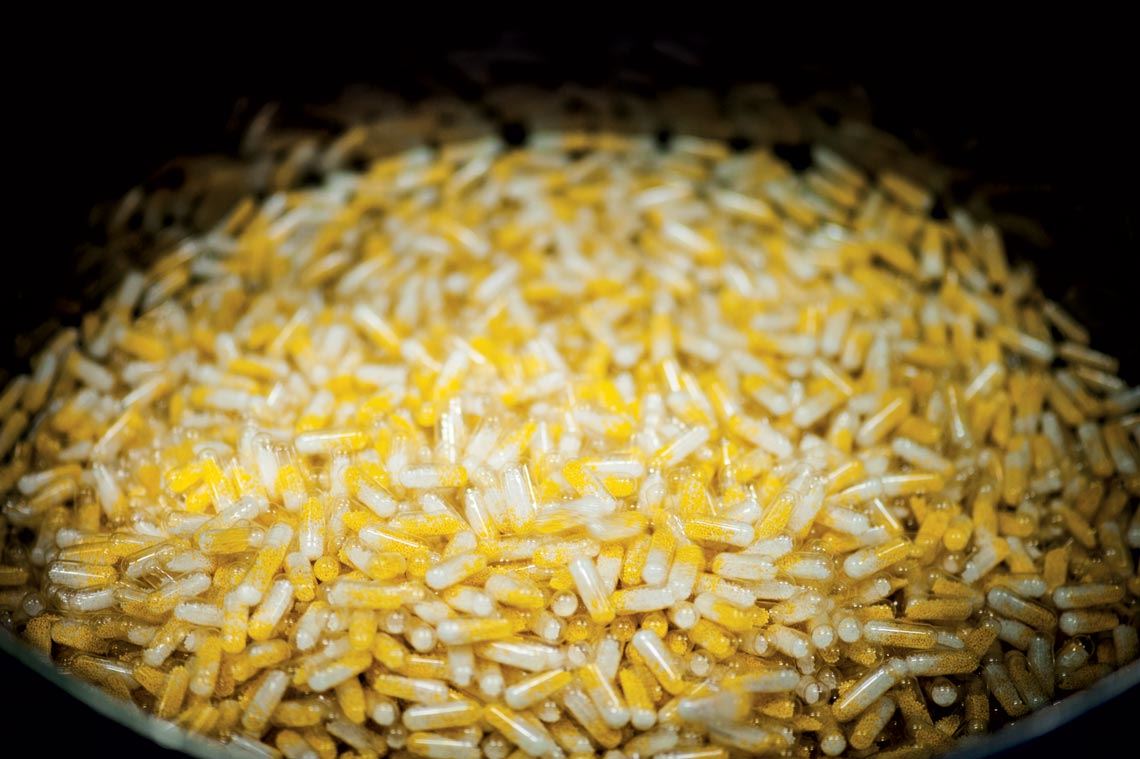 A production line at Libbs Farmacêutica: the company allocates 10% of net revenues to R&D

The conventional notion that pharma companies in Brazil do little drug research and development (R&D) of their own, but limit themselves to producing and selling medicines to local markets, has been challenged by a group of researchers from the Federal University of Rio de Janeiro (UFRJ), who found that Brazilian-owned manufacturers have enjoyed significant growth and are now shifting their strategies. In a paper published in June in Revista Brasileira de Inovação, the group showed that Brazil’s pharmaceutical companies have ramped up their R&D expenditure and expanded their in-house research staff over the past 20 years. Meanwhile, transnational firms have continued to invest in Brazil with an increased focus on activities such as clinical trials and training, but have kept their most advanced and expensive R&D programs at home at their headquarters.

The study explored data from the Brazilian Institute of Geography and Statistics’ (IBGE) Innovation Survey (PINTEC), a three-year survey that is the prime source of data on innovation performance in Brazil’s economy. The researchers focused on the data for the pharmaceutical industry in the 2008, 2011, and 2014 editions of the survey, obtained through a tabulation exercise commissioned from IBGE. They narrowed their analysis to larger companies with more than 500 employees—in the 2014 edition of the PINTEC survey, 28 national and 27 transnational firms fell within this category. Local and transnational firms showed different levels of revenue growth. Among domestic players, aggregate net sales grew by 105% from 2008 to 2014—rising from R$7.8 billion to R$16 billion. Transnational companies grew at a slower rate, with total revenues going from R$18.5 billion to R$25 billion, an increase of 36.2%.

What most caught the researchers’ attention was the caliber of R&D effort. “Brazilian companies typically focus their R&D investment on upgrading machinery and equipment, but local pharmaceutical companies broke away from this trend in 2008, expanding innovation capabilities by collaborating with universities on in-house R&D, and investing in training and capacity building,” explains economist Julia Paranhos, a researcher at the UFRJ Institute of Economics and the lead author of the paper. In 2014, domestic companies’ R&D expenditure was a total of R$794 million, growing 174% compared to 2008 in inflation-adjusted terms. This means that while generating less revenue, Brazilian pharma companies have invested twice as much in R&D as the R$344 million spent by their transnational competitors. Both domestic and foreign players have expanded their in-house R&D staff, but local companies have almost five times as many graduate-level researchers as transnational ones—the ratio was 222 to 47 in 2014.

Brazil’s pharma companies have thrived primarily on the back of the generics boom. Because companies in this market produce active ingredients that no longer have patent protection, they are not compelled to engage in high-risk investment. Brazilian-owned firms hold a 90% share of this market. “With the cash they earn from producing generics, they have consistently invested in building capabilities,” says economist Lia Hasenclever, a retired professor at the UFRJ Institute of Economics who coauthored the study.

Economist André Tosi Furtado, a professor in the Department of Science and Technology Policy at the University of Campinas (UNICAMP), who was not part of the study team, says the findings show that Brazilian pharmaceutical companies now have a favorable environment to invest in innovation which they did not have two decades ago. “Naturally, a chasm remains between Brazilian and foreign companies’ capacity for radical innovation. The investments needed to develop a new molecule are in the order of billions of dollars, a scale of R&D spending only possible at the headquarters of transnational companies. But there is still room for native firms to find niche markets and to invest in R&D, with the study showing that Brazilian companies are increasingly developing advanced technologies and collaborating with universities,” he says. As they gain territory, however, they remain highly dependent on imported inputs. “Brazil has no manufacturers of the active pharmaceutical ingredients needed to produce medicines. An effort in the 1980s to produce raw materials locally was ultimately abandoned,” says Furtado. “We currently import many of these inputs from India.”

Strong financial performance has enabled Brazil’s pharmaceutical companies to move beyond the manufacture of copies of brand-name medicines, but they have also received government incentives to develop their manufacturing and innovation capabilities. This, in fact, was one of the main goals of the study. “We wanted to assess the effects of government policies adopted in the 2000s and of innovation support programs on the performance of pharmaceutical companies,” says Paranhos. One out of four Brazilian companies uses public funding to finance internal R&D, according to the 2014 edition of the PINTEC survey. “Many of them have used these instruments to expand their technological capabilities,” says the researcher.

Several instruments have been created over the years, such as the “Lei do Bem,” a set of R&D tax incentives introduced in 2005 to boost innovation. FAPESP created several initiatives of its own in the late 1990s. One was the Research Partnership for Technological Innovation Program (PITE) to co-fund industry-university collaborations. This program has supported projects at pharmaceutical companies and has organized calls for proposals in partnership with some of them. Another initiative, the Research for Innovation in Small Businesses (RISB, or PIPE in the Portuguese acronym) program, provides nonrepayable funding to small companies for research and has had a significant impact on the pharmaceutical research ecosystem (see sidebar). Other examples include nonrepayable funding provided by the Brazilian Funding Authority for Studies and Projects (FINEP) between 2006 and 2010 and the Brazilian Development Bank’s (BNDES) Program to Support the Development of the Pharmaceutical Supply Chain (PROFARMA), which ran from 2004 to 2016. In 2009, the government launched an effort to use the purchasing power of the National Healthcare System (SUS) to support local production of biopharmaceutical products through Industry Development Partnerships (PDPs). Local privately owned companies formed direct partnerships with public manufacturing facilities and signed agreements with foreign companies to transfer technology for domestic production of new medicines.

Cristália, a company based in Itapira, southeastern Brazil, has leveraged several of these instruments: it secured funding from BNDES; was supported by two FAPESP PITE projects between 2005 and 2010; used FINEP-provided funding; and entered a PDP with the Oswaldo Cruz Foundation and the Immunobiological Technology Institute (BIOMANGUINHOS) to develop a biosimilar recombinant human growth hormone that was approved for marketing last year. Founded in 1972, the company started hiring in-house researchers back in the 1980s, but it was only in 2004 that it established its first collaborations with universities and research groups. Today, it has a portfolio of 113 patents. Some of the notable products it has developed include Helleva, a drug for erectile dysfunction with an active ingredient similar to Viagra, and a burn ointment without animal-derived ingredients, produced using a bacterium sourced from Brazilian biodiversity. “Less than 5% of our innovation investment comes from public funding—Cristália annually invests around 7% of net revenue in R&D,” says CEO and chairman Ricardo Pacheco.

Libbs, a fellow Brazilian company that produces 90 different drugs at a manufacturing site in Embu das Artes, in Greater São Paulo, started production of biological medicines in 2016. The company was the first to locally produce a biosimilar to Rituximab, a monoclonal antibody used to treat some types of cancer and rheumatoid arthritis. In the recent past it received funding of R$250 million from BNDES, another R$250 million from FINEP, and additional funding for its Integrated Development Center. “Since 2013, we have invested 10% of our net operating revenue in R&D,” explains Márcia Martini Bueno, director of institutional affairs at Libbs.

But in recent years many manufacturing support programs have been dismantled. FINEP has discontinued nonrepayable funding and BNDES has wound up its PROFARMA program. “Government support for radical innovation has been weakened,” says Hasenclever. The PDP program was also discontinued last year. Yet the most recent PINTEC data, which were released only a few months ago and not included in the article, show that pharmaceutical companies continued their R&D efforts from 2014 from 2017 despite the adverse economic conditions. “These investments will only generate returns in the long term. But pharmaceutical and medical product manufacturers are remarkably resilient, as people continue to buy their products even during severe economic crises,” says Furtado.

FAPESP provides funding for collaborations between universities and pharmaceutical companies on basic and applied research programs. Brazilian-owned pharma companies, such as Biolab, and transnational firms such as UK-based AstraZeneca and GSK have collaborated with FAPESP on cosponsored projects within the Research Partnership for Technological Innovation Program (PITE), launched in 1994. Other pharmaceutical companies that have used this funding mechanism include Brazilian firms Aché and EMS.

GSK partnered with FAPESP to set up two Engineering Research Centers (CPE) where they collaborate on long-term programs over a period of 5 to 10 years. Research is co-funded in equal parts by FAPESP and the partner company, while the universities hosting the centers provide infrastructure and pay researchers’ salaries. One of these centers, which does research in sustainable chemistry, was created in 2013 at the Federal University of São Carlos (UFSCar).

In 2015, GSK established a partnership with Instituto Butantan to create a Center of Excellence in new Target Discovery, where it develops treatments for neurodegenerative diseases, rheumatoid arthritis, and cancer. “Alongside our collaborations with research institutes, in 2011 GSK launched Trust in Science, an initiative to build sustainable, long-term scientific capabilities in collaboration with global research centers and local governments,” says Evelyn Lazaridi, medical director at GSK Brasil.

Sergio Queiroz, a professor in the Department of Science and Technology Policy at the University of Campinas (UNICAMP) and deputy coordinator of Innovation Research on the Science Board at FAPESP, notes that small businesses created to develop specific therapies also play a role in the pharmaceutical research ecosystem. Recepta Biopharma, a biotechnology firm that develops compounds with potential activity against cancer and has previously received funding from FAPESP’s Research for Innovation in Small Businesses (RISB, or PIPE in the Portuguese acronym) program, is one example. “Small innovative companies develop intellectual property for subsequent use by Big Pharma,” he explains.

Another collaborative initiative is UNICAMP’s Protein Kinase Chemical Biology Center. The center is a member of the Structural Genomics Consortium, a Canadian-led initiative that brings together 400 researchers from around the world and supports the discovery of new drugs using an open science model, where ideas and funding are shared among partnering universities and corporations (see Pesquisa FAPESP issue no. 255). “Big Pharma does research and development in collaboration with universities, other companies, and even competitors when in a precompetitive phase,” says Queiroz.