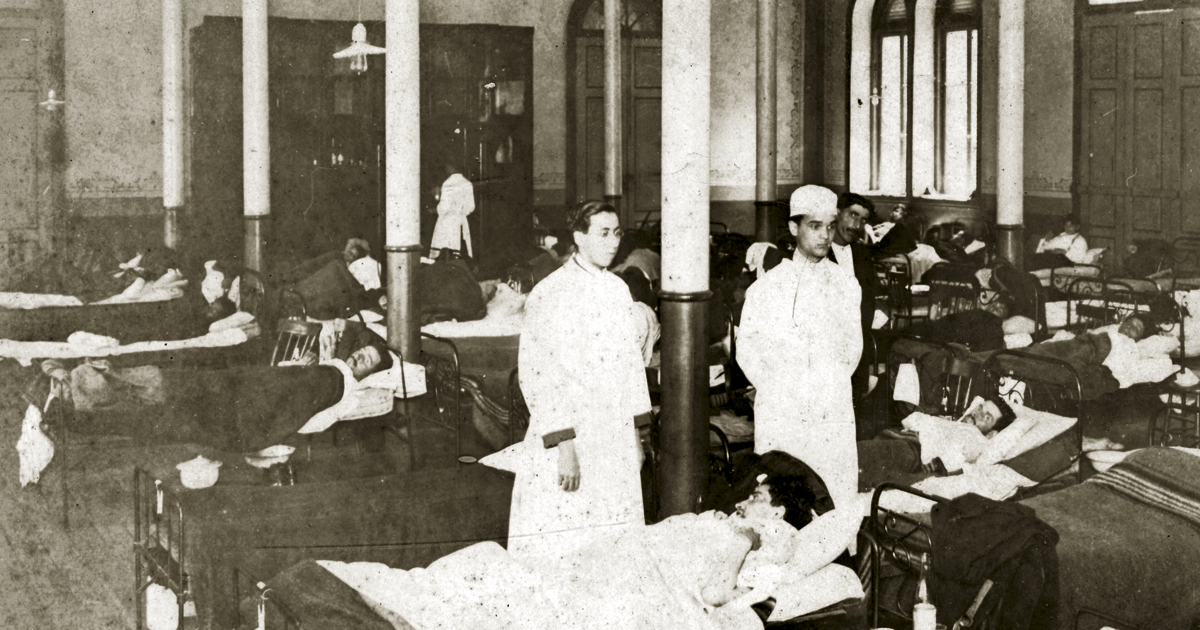 In late 1918, the Archdiocesan College, in São Paulo, was converted into temporary hospital

A virulent blast from Africa and Europe hit Rio de Janeiro in August 1918. The diagnosis was uncertain and the symptoms varied; the strange illness suddenly struck Rio and rapidly spread to other regions of Brazil. It soon became a disaster of unimaginable proportions. It is estimated that the Spanish flu, as it became known, killed 35,000 people in Brazil including president-elect Rodrigues Alves (1848–1919). Across the world, the disease wiped out approximately 30 million people, nearly four times the number killed during World War I (1914–1918), estimated at 8 million.

A century after the greatest influenza pandemic known to man, no one knows for sure how it all began. Some historians argue that the virus emerged in North America and was brought to Europe with the troops who fought in the war. Others argue that the infectious agent appeared in China in 1917, moved to the United States and then to Africa and Europe, spreading throughout the rest of the world. In Brazil, the first news of this strange illness affecting the world began to appear in newspapers in August of 1918, but did not stir attention among the public authorities.

Several countries censored news of the epidemic because the flu had affected their armies. This led to the disease initially being called “trench fever.” Because it was neutral during the war, Spain was the only country in which the press made no secret of the damage caused by the so-called “fiebre de los tres dias,” which came to be known around the world as the Spanish flu.

The first reports of the disease were ignored in Brazil, or dismissed scornfully or as a joke, as historian Adriana da Costa Goulart noted in an April 2005 article in the journal História, Ciência, Saúde – Manguinhos on the political and social impacts of the Spanish flu epidemic in Rio, which at that time was the capital of the country.

The situation began to change with rumors that troops in two groups from Brazil who supported the Allies in World War I were contaminated in Europe and Africa, respectively: the Patrol Squadron, commanded by admiral Pedro Max de Frontin (1867–1939), and the medical mission headed by Nabuco de Gouveia (1872–1940). The news about the flu gained even greater repercussions in Brazil when the crew of another medical mission headed to Senegal aboard the La Plata fell victim to the mysterious disease.

The reports suggested that doctors, soldiers, and officers of the La Plata were infected in Freetown, Sierra Leone, on August 29, 1918. On September 9, the first bodies were thrown into the sea. Shortly afterward, telegrams arrived in Rio de Janeiro describing the misfortunes of the mission. At that time, however, it is likely that the virus was already circulating among the Brazilians, who had still not realized the scale the epidemic would assume in the country.

Some authors argue that the causative agent of espanhola, as influenza was also called, had arrived in Brazil days before on the English vessel Demerara, which left infected passengers in the ports of Recife, Salvador, and Rio de Janeiro. Regardless of the source, the flu spread quickly. The illness manifested with symptoms ranging from ringing in the ears, headaches, fever, chills and vomiting blood, accompanied by disturbances in the cardiac nerves and infections in the intestines, lungs, and meninges. It mostly affected individuals between 20 and 40 years of age, and within a few days caused choking, diarrhea, stabbing pains, and in extreme cases, coma and death.

The doctors did not know how to handle the disease. “More than anything else, they prescribed quinine to try to contain the epidemic,” says historian Claudio Bertolli Filho of the Graduate Program in Communication at the School of Architecture, Art, and Communication of São Paulo State University (UNESP). “The Oswaldo Cruz and Butantan Institutes also announced the development of a vaccine against the disease, which was never ready,” says the researcher and author of the book A gripe espanhola em São Paulo, 1918: Epidemia e sociedade (The Spanish flu in São Paulo, 1918: Epidemic and society; Paz e Terra, 2003). Since the prescribed drugs had no effect, home remedies became more popular. A number of doctors took advantage of the chance to make money; this triggered the appearance of previously unknown medications, or drugs that were credited with healing properties against influenza. The public authorities limited their activity to advising the population to avoid places where people gathered.

In the capital of the country, the epidemic was seen as a result of neglect and administrative incompetence by the government

As a result, the country’s major cities were close to collapse. As in Paris in 1889, when a flu epidemic affected two-thirds of the population, the disease brought down three-fifths of Rio dwellers. “In a city with almost 1 million inhabitants, 600,000 people were sick, and 15,000 of them died,” says historian Ricardo Augusto dos Santos of the Oswaldo Cruz House at the Oswaldo Cruz Foundation (COC-FIOCRUZ). “People died at home, in the streets, and at work,” he adds. Santos is a researcher who wrote an article published in March 2006 in História, Ciência, Saúde – Manguinhos about collective symbolic manifestations related to the Spanish flu in Rio.

The reports from this era are terrible: helpless families, many wracked by hunger, famished children sucking at their dead mother’s breast, attacks on bakeries, warehouses and markets by hungry mobs who coughed as they looted. “None of our calamities come anywhere near the disease that reigned: what was terrible was not the number of casualties, but that there was nobody to build the coffins, to take them to the cemeteries, to dig graves and bury the dead,” wrote the physician and memoirist from Minas Gerais, Pedro Nava (1903–1984), in his Chão de ferro (Iron floor; 1976). “There were too many bodies for the few usual gravediggers, who also were scarce because of the disease. Amateurs were hired at better prices. Then came the inmates.” The writer refers to prisoners who were recruited to work digging graves and transporting corpses.

The disease reached São Paulo in mid-October via a football team that came from Rio de Janeiro. “As in other states in Brazil, the São Paulo Health Service was quick to say that it was prepared to save the sick and protect society from infection by this disease,” says Bertolli Filho. “But as in Rio, the flu soon revealed the dysfunction of São Paulo’s health policy and the lack of medical knowledge on therapy and the means of transmission.”

Just over 12,000 people died in the state of São Paulo during the two months that the epidemic remained active in Brazil. According to reports from that time, carts passed through the streets in the center of the city collecting corpses from the houses and roads, where the bodies awaited burial. The churches halted their masses, while in the cemeteries mass graves were dug to bury bodies shrouded in sheets without coffins. At the time, leisure clubs, colleges, and churches were turned into makeshift hospitals to care for the sick, such as the Paulistano Athletic Club, which closed in November and December of 1918 because of the epidemic. A temporary hospital was installed in the club’s ballroom.

The situation created by the Spanish flu was seen as a result of negligence, neglect, and administrative incompetence on the part of the government, which could not cope with the threats it faced, argues Adriana Goulart. “The slowness to establish prophylactic measures and the structural limitations that affected health institutions during the fight against influenza fueled public anger at several government characters, particularly the president at that time, Wenceslau Braz (1868–1966), and the director of public health, Carlos Seidl (1867–1929),” he wrote.

Seidl was described by newspapers of the time as a “cretin, relapsed and seditious,” who was only counting the days until his retirement and whose “inveterate inertia and dogmatism of [an] old bureaucrat allowed the epidemic to be festively received by Public Health,” leaving the population to fend for itself. These criticisms became so widespread that influenza was known in Rio as “Seidl’s disease.”

He was fired in October 1918 and replaced by the physician Theóphilo de Almeida Torres (1863–1928), who appointed the physician Carlos Chagas (1879–1934) to spearhead the services to fight the Spanish flu. In light of the failure to discover the causative agent of influenza, Chagas did what he could amid the crisis: he provided the city with more hospital beds for the sick, and established quarantine and isolation routines for ships docking in the country and compulsory notification for cases of the disease.

Just as the Spanish flu appeared, it was gone. Its epidemic cycle ran out in the first months of 1919. While the disease caused millions of deaths and dissatisfaction with the governing elites, it also unleashed a renewed respect for health knowledge. The influenza virus was isolated in 1933; in 1944, researchers from the University of Michigan in the United States developed the first vaccine against influenza.