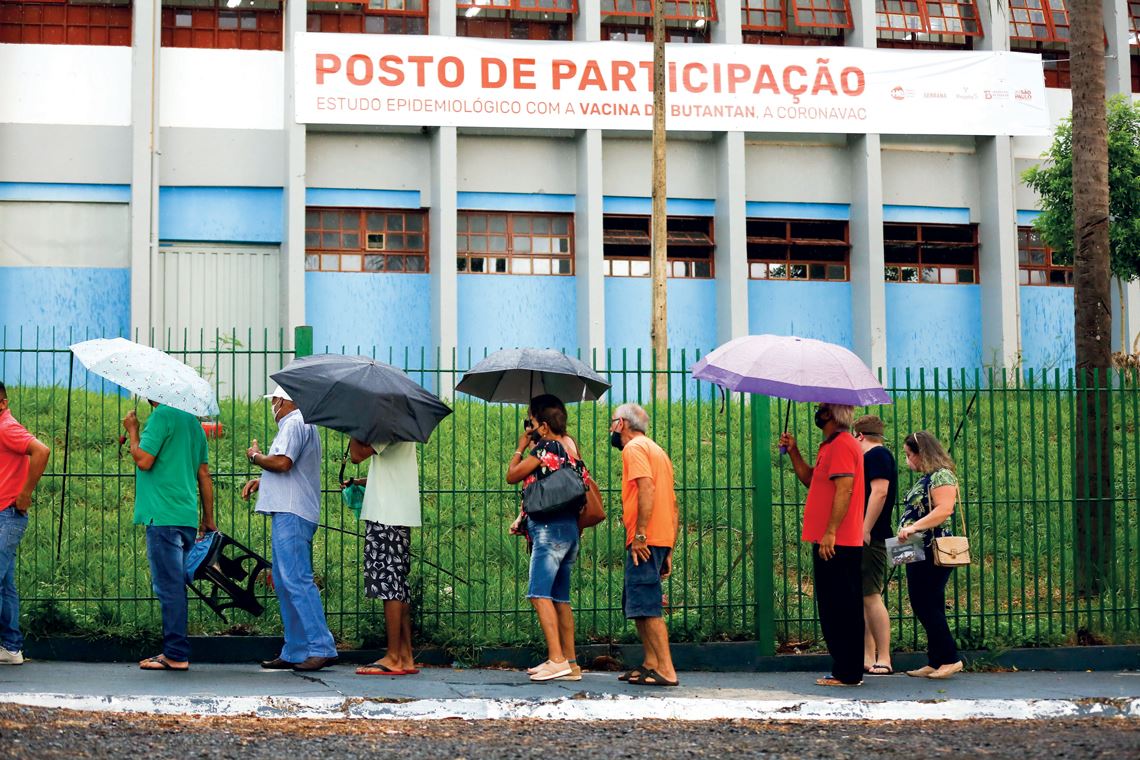 Serrana residents in line to be vaccinated against COVID-19

In the quiet town of Serrana, located in the Ribeirão Preto metropolitan region, 330 kilometers (km) from São Paulo, life has changed since the Butantan Institute announced in February that the town would be the object of research on the effectiveness of CoronaVac. The goal is not to test the efficacy of the COVID-19 immunizing agent—which has already been approved by the Brazilian Health Regulatory Agency (ANVISA)—but to investigate its effect on a community and illustrate what could take place in the country if it were adopted on a large scale. With the plan to vaccinate the entire adult population—28,300 of its 43,000 inhabitants—in two months, the study turned eight public schools into temporary research centers, recruited around 500 people, most of them town residents, to implement the project, and even accelerated the local real estate market.

“It is like a war operation,” shares physician Marcos de Carvalho Borges, from the University of São Paulo Ribeirão Preto School of Medicine (FMRP-USP), general director of the Serrana State Hospital and lead researcher in the study, named Project S. The codename S stands for both “Serrana” and “Sars-CoV-2”—the virus that causes COVID-19—as well as for “secrecy,” since arrangements for the research began in August 2020 and were kept secret.

“This type of research is complex since the area where it will be carried out must be well known. There is also a logistical challenge, which is carrying out the vaccination,” explains infectious disease expert Ricardo Palacios, medical director of clinical research at the Butantan Institute and one of the scientists behind Project S. The first six months were spent improving epidemiological surveillance and conducting a census in the town to gather data on the population and real estate. “With this data, we know whether a piece of property is commercial or residential and how many people live in it,” explains Borges. “We are also able to monitor the arrival of outsiders who were attracted by the opportunity for vaccination.”

The researchers split Serrana into 25 clusters or groups, identified by four different colors. Vaccination would take place in chronological order, according to each color. Phase one ended on March 14th, with the application of the first dose to all volunteers. “Interest and participation of the population were high. We vaccinated 97.3% of the 23,800 people registered,” says Palacios. Phase two, when volunteers will receive their second dose of CoronaVac, has already begun. The first results should be available over the next few months.

Before vaccination, all participants underwent serology testing to check whether they had been in contact with the novel coronavirus. The vaccines used for the research were donated by Sinovac—the Chinese manufacturer of CoronaVac—and the project has been funded by the Butantan Institute, with support from FAPESP. Of the R$32 million destined for a CoronaVac project, the Foundation has authorized the use of R$4 million for the Serrana project.

Epidemiological studies involving whole cities are nothing new. In medical schools, epidemiology classes usually cover the Framingham Heart Study, conducted in Framingham, United States. Started in 1948, it initially included 5,209 men and women, who had their general health checked every three to five years. The study is now in its third generation of volunteers and has been the subject of more than 3,000 scientific articles, which have helped build up base knowledge on the causes and risk factors for cardiovascular disease.

In Brazil, for nearly four decades, scientists from the Federal University of Pelotas (UFPEL), in Rio Grande do Sul, have been developing a project on the influence of an individual’s first few years of life on their general health. To this end, they have been studying all those born in the city in 1982, 1993, 2004, and 2015. Comparing generations, according to UFPEL, has facilitated studies on infant mortality, breastfeeding, malnutrition, and obesity, which have resulted in more than 500 articles.

In the northern region of Brazil, the population of Mâncio Lima, in the state of Acre and which borders Peru, has also been intently observed by USP scientists. Since 2018, 2,600 of its 9,000 residents have been assessed and tested every six months as part of an international study on malaria transmission. In 2020, the same population sample became the object of research into the dynamics of COVID-19 transmission, in a study organized by physician Marcelo Urbano Ferreira, from the Institute of Biomedical Sciences at USP (ICB-USP), with funding from FAPESP.

“We used the fact that we had already been observing this population and collecting blood samples to test for COVID-19 antibodies,” Ferreira highlights. The serological survey carried out in November verified that 34.5% of the population had already been in contact with Sars-CoV-2. “Now, we want to find out how many individuals have been infected since November, how many of those who had antibodies remain positive for antibodies, and which strain of the new coronavirus is prevalent in the town.”

Palacios points out that an essential distinction of Project S in relation to the Pelotas and Framingham studies is that the Serrana study proposes a pharmacological intervention—the application of the vaccine. The clinical trial method adopted in the São Paulo town is known as a stepped-wedge trial—a model first used in Gambia in 1986. Over four years, 60,000 Gambian children were vaccinated against hepatitis B, while 60,000 others were part of the control group. The goal was to assess, three or four decades later, the protective effect of the vaccine on chronic liver disease in adults. The patients who were vaccinated are still under observation, but the hepatitis B vaccine has been part of the national immunization program since the 1990s.

This type of research carries two kinds of risk. The first is no community engagement. To avoid this, it is key to implement a good communication strategy and keep information exchange channels open to the population. The second risk is repeating what occurred in a 2014 study, launched during an Ebola epidemic in Africa and which never advanced since the number of cases dropped dramatically before the research began. However, these risks do not apply to Project S, according to the scientists behind it.

According to Palacios, the Serrana study may provide relevant information to the scientific community and to the more than 20 countries using CoronaVac. “The countries that are using, or considering using it, will benefit from our data,” adds the Butantan medical director, highlighting that he is unaware of any other place in the world conducting a similar COVID-19 study.