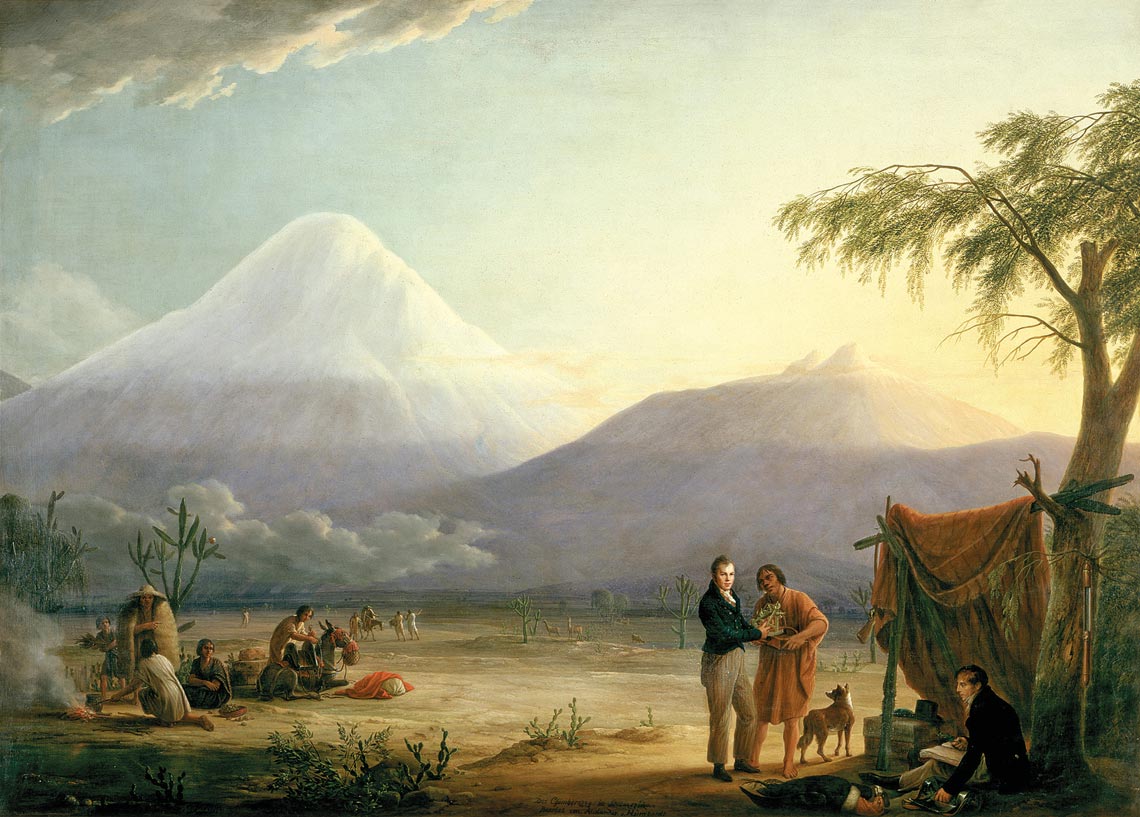 Humboldt (standing left) and French botanist Aimé Bonpland (seated) at the foot of the Chimborazo volcano in Ecuador, in a painting by the German artist Friedrich Weitsch

“You could not read from books in eight days what Humboldt can tell you in one hour,” said poet Johann Wolfgang von Goethe (1749–1832) of German naturalist Alexander von Humboldt following his return from a five-year expedition to the New World between 1799 and 1804. In the company of French botanist Aimé Bonpland (1773–1858), his friend Humboldt had visited locations in present-day Venezuela, Colombia, Cuba, Ecuador, Peru, and Mexico to document and study then-unknown peoples, artifacts, and plant species. He had also studied the geographical distribution of some plant species, bird migration, local geology and mineralogy, and other natural phenomena. On the 250th anniversary of his birth, we are reminded by historians of the important contributions from his research and observations to progress in fields such as zoology and botany, as well as geology and meteorology.

Alexander von Humboldt (1769–1859) was born into a wealthy family of aristocrats with strong intellectual leanings, in the Kingdom of Prussia (present-day Germany). “He grew up in the famous castle of Tegel in northern Berlin,” says Willi Bolle, a professor of literature at the School of Philosophy, Languages and Literature, and Humanities at the University of São Paulo (FFLCH-USP). It was there that Alexander and his elder brother, Wilhelm von Humboldt, received their education (see sidebar opposite). 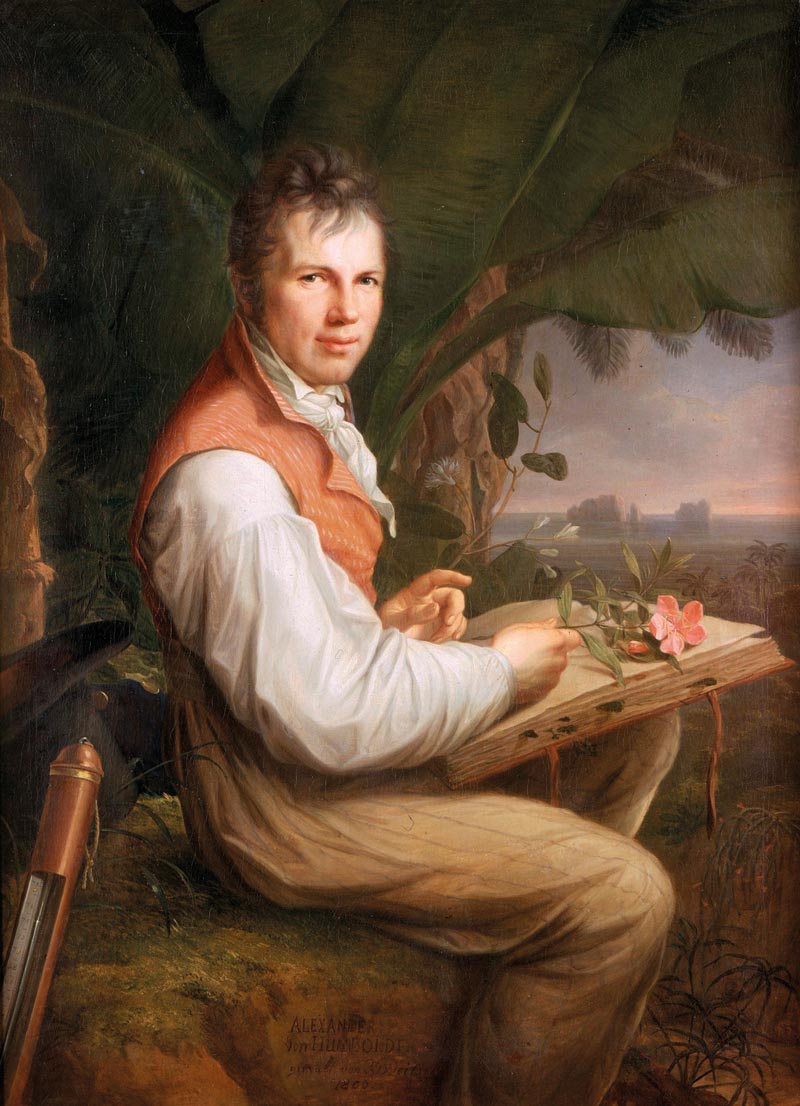 A portrait of Humboldt painted by Weitsch in 1806Wikimedia Commons

Bolle has done extensive biographical research on Humboldt and some of his most important work from his expedition to the Americas. “The keen interest he took in subjects related to nature led him to pursue studies in the natural sciences at the universities of Frankfurt an der Oder and Göttingenn after completing secondary education,” says Bolle. After a spell at the School Mines in Freiberg, he worked as a civil servant in the Mining Department of the Prussian government. “From an early age, Humboldt also dreamed of going on faraway expeditions to exotic lands,” says Germanist Marcus Mazzari of the Department of Literary Theory and Comparative Literature at USP.

Following his mother’s death in 1796, Humboldt and his brother inherited an estate which enabled him to quit his job in the civil service and devote himself entirely to science. A short while after, he moved to Paris, France—then the scientific center of the world. He there began planning his voyage, which he funded out of his own pocket. He received permission to embark for the Spanish colonies of Central and South America in early 1799. Humboldt and Bonpland set sail from the La Coruña harbor in Spain in June that year. Their voyage was to take them 10,000 kilometers to Cuba, then to Mexico, but an outbreak of typhoid fever on board made it necessary to dock in Cumana, Venezuela (see map on page 94).

The two naturalists decided to start the expedition there and then. They spent 16 months in Venezuela, exploring the region of llanos and the rain forests on the banks of the Orinoco River, going as far as the border with Brazil, but never past it. Brazil was then a possession of the Kingdom of Portugal, which suspected Humboldt to be a spy. Authorities in Rio de Janeiro under Dom João VI (1767–1826) issued an order for his arrest if he entered the country. 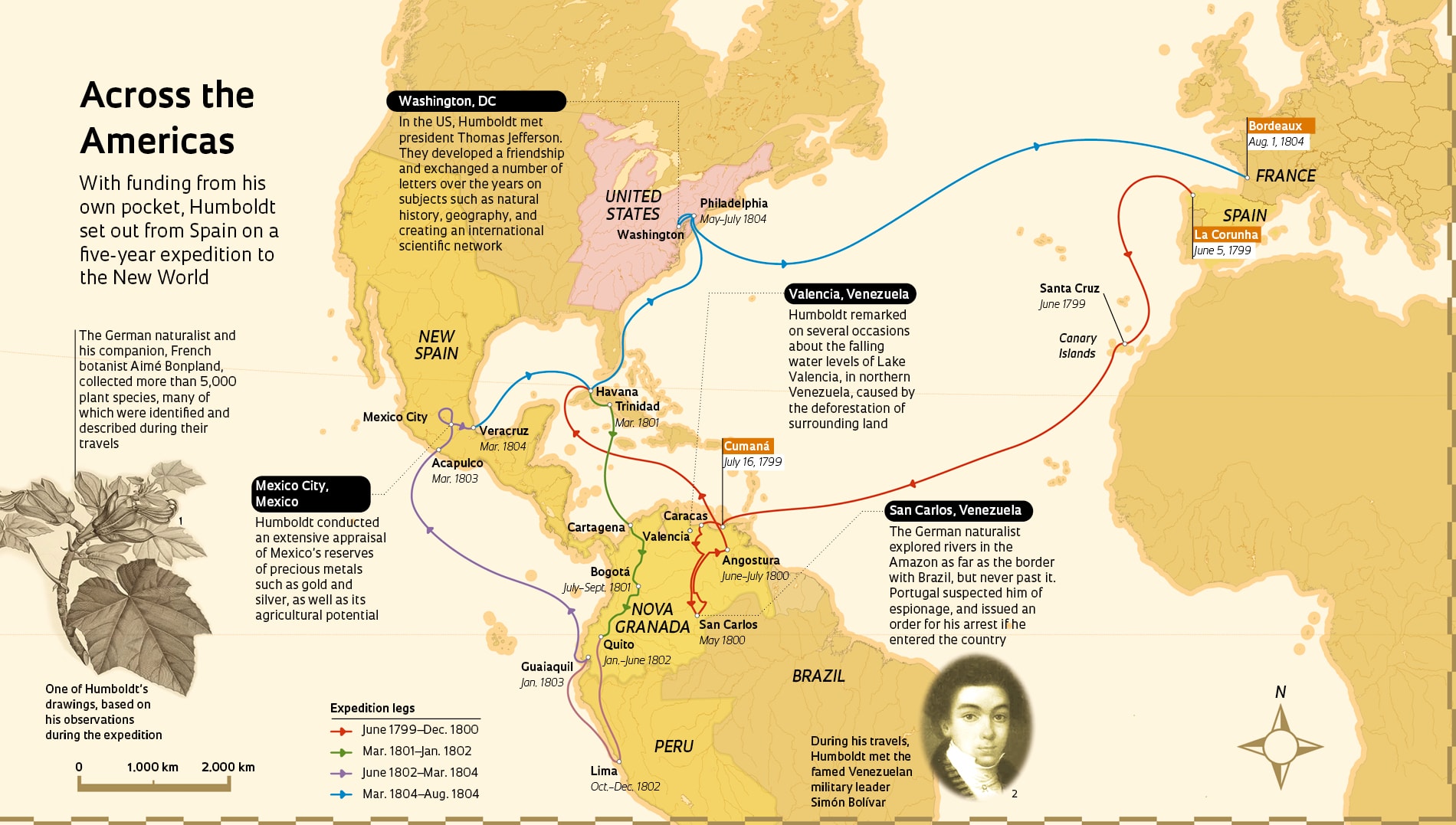 While in Venezuela, Humboldt observed with concern the rapidly falling water levels of Lake Valencia, which he attributed to intensive and systematic deforestation of the surrounding land by local residents. His suspicion was based on the idea that forests could enrich the atmosphere with moisture, retain rainwater, and help prevent soil erosion. “Humboldt’s expeditions developed in him the notion that nature was governed by an interdependent system whose phenomena and forces were ‘intertwined with one another and amalgamated as one,’ as his friend Goethe would later write,” says Mazzari. “This idea would help to shape the concept of ‘ecology,’ although the term itself would only be coined years later by German zoologist Ernst Haeckel [1834–1919], in 1866.”

Mazzari has just completed his book A dupla noite das tílias: História e natureza no Fausto de Goethe (The double night of the linden trees: History and nature in Goethe’s Faust). The book, which is slated to be published by Editora 34 in September, draws parallels between the ecological aspects present in Humboldt’s expeditionary studies and those contained in Goethe’s work. Far ahead of his time, Humboldt warned that humans were meddling with the climate and that this could have unforeseeable impacts in the future.

Humboldt had a universal and humanistic world view, and published in a variety of fields throughout his lifetime

From Venezuela, Humboldt continued to Cuba in December 1800, and from there, in March 1801, to Cartagena, Colombia—the starting point of a 20-month expedition across the Andes in Colombia, Ecuador, and Peru. From Guayaquil, Ecuador, he traveled to Mexico, where he conducted an appraisal of the country’s reserves of precious metals, such as gold and silver. While Humboldt’s statistical information on Mexico’s mineral wealth is no doubt impressive, he was keen to emphasize that the country’s primary source of wealth was its agriculture.

Humboldt’s expedition was marked by geopolitical upheaval in Europe and in the Americas. In the Old World, Napoleon Bonaparte’s (1769–1821) troops were sweeping over Europe.

The United States had recently won its independence from the United Kingdom in 1783, and abolitionist movements were growing in strength. “Humboldt had espoused the ideals of the French Revolution and was a staunch critic of slavery in the Spanish colonies,” says Bolle. “In 1804 he met the then 21-year-old military officer Simón Bolívar (1783–1830), with whom he had lengthy discussions about ending slavery and liberating Spanish colonies in the Americas.” 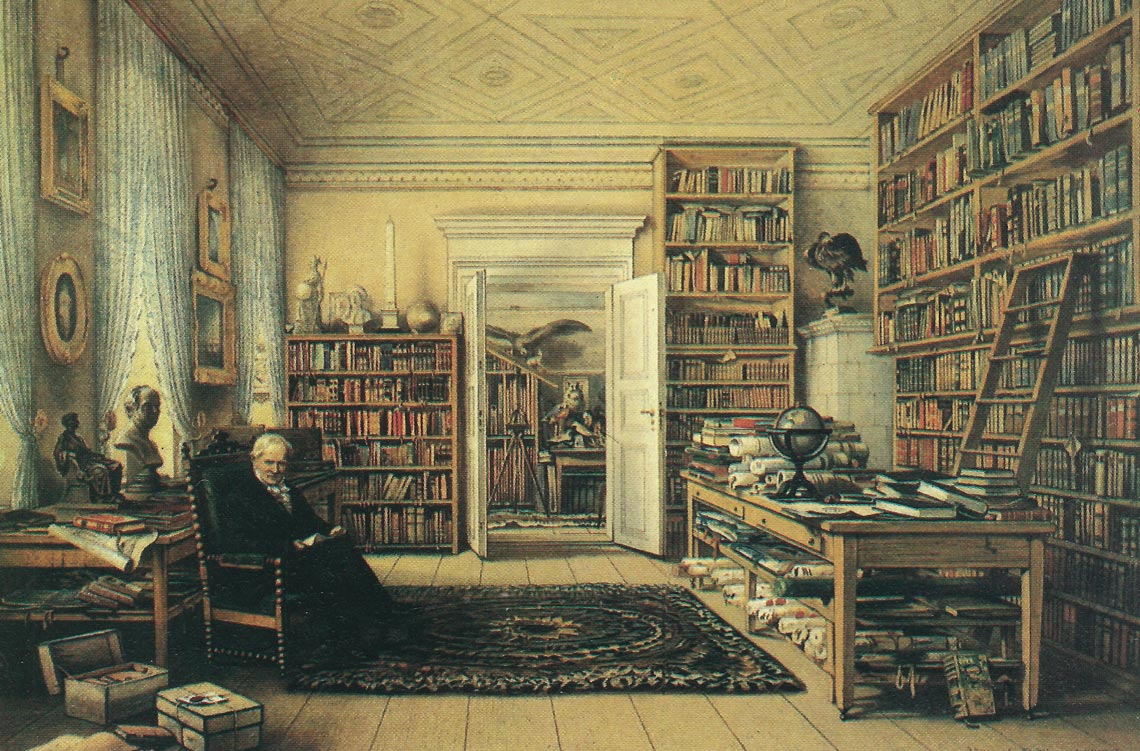 In a library in Berlin, working on his book, CosmosWikimedia Commons

When his travels took him to the United States, Humboldt met then-president Thomas Jefferson (1743–1826), in an encounter that led to a lasting friendship. “They exchanged a number of letters over the years on topics of mutual interest, such as natural history, geography, and the formation of an international scientific network,” says Bolle. When he returned to Europe at age 35, Humboldt settled in Paris, where he authored and published a vast collection of books with accounts of his travels, in both French and German. The first was Views of Nature, written in 1808. “In it, Humboldt writes more than just scientific descriptions of plants, animals, and landscapes, but also reflections on nature in aesthetic, contemplative terms through which he engages in discourse in defense of the environment and its ecology,” explains Bolle.

A few years later, Humboldt published Personal Narrative of Travels to the Equinoctial Regions of America, describing his exploration of Venezuela’s coast, savannas, and forests. Around 1809 he published Views of the Cordilleras and Monuments of the Indigenous Peoples of the Americas, and the following year Political Essay on the Kingdom of New Spain. The naturalist would undertake yet another expedition, this time into Russia and Central Asia, in 1829. During his travels—Mazzari writes in his book—the naturalist warned of the potential desertification of the Aral Sea and global warming. This, he predicted, would to a great extent be caused by human activity.

“Humboldt had a universal and humanistic world view and published studies in a variety of fields throughout his lifetime,” says Mazzari. The naturalist died in 1859 at the age of 89 while working on his treatise on the humanities and life sciences, Cosmos. The book was published in five volumes, the fifth of which was incomplete and was published posthumously. 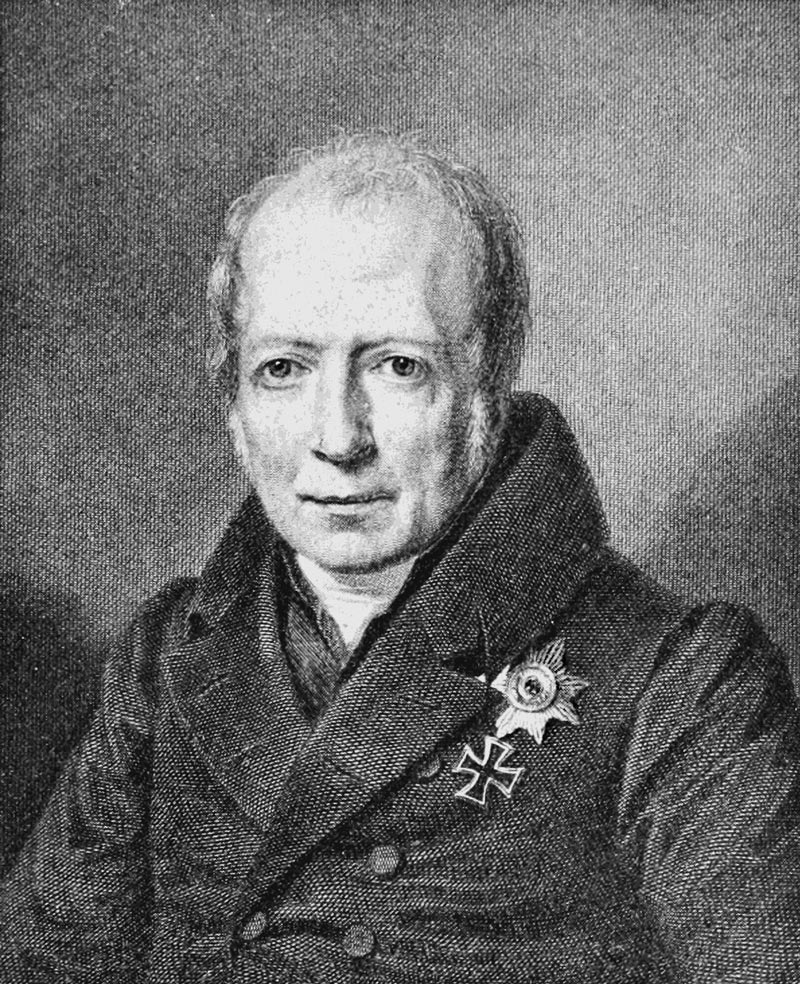 The philosopher and diplomat Wilhelm von Humboldt (1767–1835) played a prime role in building and shaping the modern university. Following his appointment as head of the Department of Religion and Public Education in the Prussian Ministry of Interior Affairs, he instituted a series of reforms in the state education system in the early nineteenth century. The reforms were part of a broader government program that aimed to develop the Kingdom of Prussia into a strong, modern nation.

Humboldt’s concept of education was derived from a German tradition wherein philosophy and education are combined in perfecting one’s skills and faculties, in a process that supports both self-cultivation and the development of the nation. This idea became the cornerstone of the Humboldtian reforms, which also led to the founding of the University of Berlin in 1810.

The university Humboldt envisioned, however, did not include training in a laboratory setting. Rather, Humboldt’s planned curriculum was primarily devoted to “pure” theoretical science, particularly mathematics and physics. A fundamental shift occurred between 1840 and 1870, after Humboldt’s death, with the introduction of university research and the professionalization of faculty.

This shift led to an approach to science that reconciles the pursuit of pure knowledge with the training of university students. With the advent of this model, the role of university professors was reformulated: whereas previously they were required only to master the subjects within their field of training and to be able to transmit their knowledge to students, they were now also expected to engage in research while concurrently transmitting the knowledge produced thereby to students. This model was soon adopted by other European universities and later found its way to the New World.