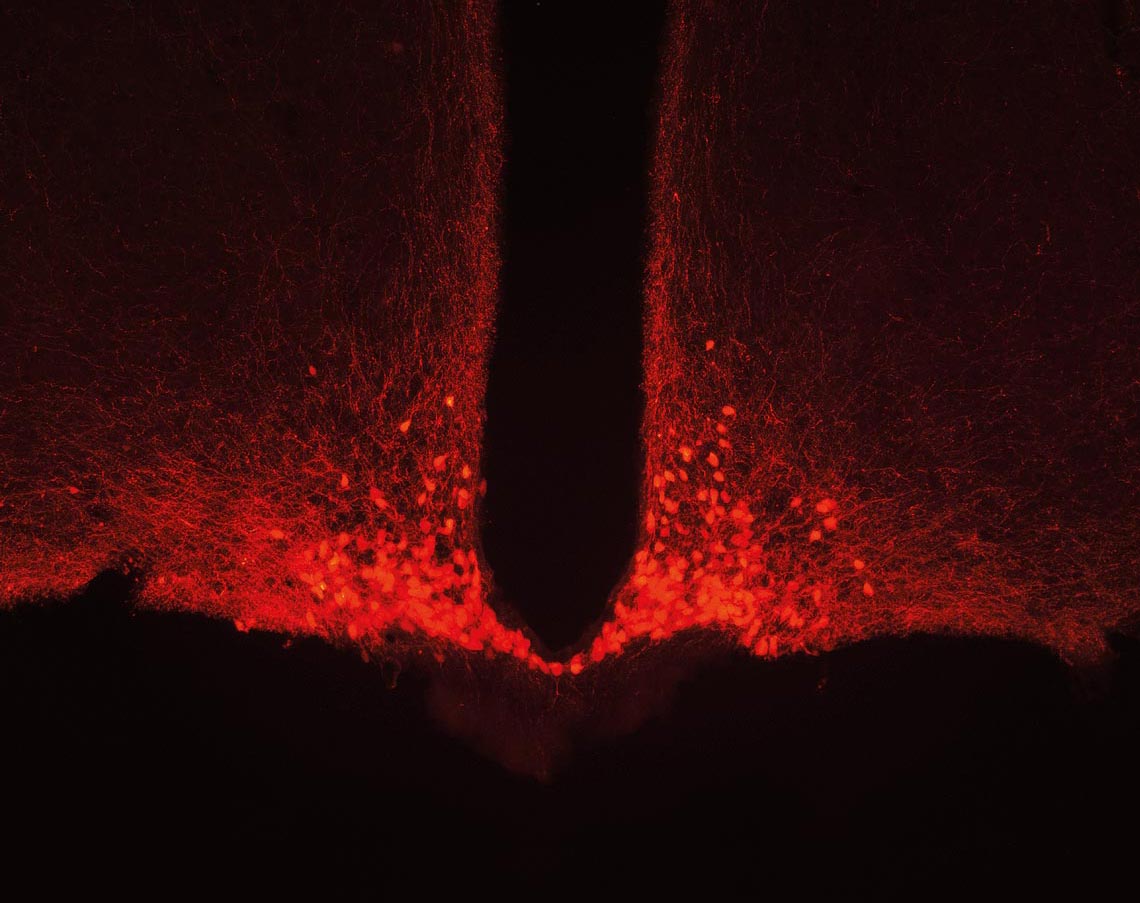 Anyone who has ever dieted knows the process. After taking the plunge and starting on a diet, the digits on the scale will normally begin to drop whatever the strategy. But the pace of weight loss soon begins to slow, even with the aid of medication, eventually stalling altogether or, even worse, reverse into weight gain. The way humans’ and other species’ organisms have been shaped by evolution can partly explain why losing weight is difficult. Thousands of years of food being in short supply and requiring substantial effort to be gotten have endowed our bodies with powerful and complex strategies for conserving energy. In experiments on mice, a research group led by physiologist José Donato Junior, of the University of São Paulo’s Institute of Biomedical Sciences (ICB-USP), has found yet another mechanism acting against weight loss.

The culprit is a compound known for a century but hitherto unsuspected of: growth hormone, a protein produced by the pituitary—a gland at the base of the brain—that acts on peripheral tissues. Growth hormone is secreted maximally during sleep. It increases calorie expenditure, releases energy stored in adipose tissue, and induces cell growth and cell repair in bones, muscles, and the gut. Now, the USP team has found that when food intake is diminished, growth hormone activates a region of the brain that induces hunger and reduces energy expenditure. As a result, it becomes more difficult to lose weight.

Donato and his colleagues presented evidence of this previously unnoticed effect—observed in experiments in mice—in a paper published in the February 8 edition of Nature Communications. “When calorie intake is restricted, the level of growth hormone rises and our bodies go into survival mode: instead of modulating growth, it signals the need for food intake and to conserve energy,” explains Donato.

The finding came as somewhat of a surprise to experts in the field. “We often find new functions for known hormones, but none as significant as this,” says endocrinologist Lício Velloso of the University of Campinas (UNICAMP), an expert in biochemical mechanisms associated with obesity and diabetes. “It has never been so clearly demonstrated that growth hormone acts on the brain to regulate hunger and energy expenditure.”

Fasting has been known to increase the release of growth hormone since the 1960s. In trials with healthy volunteers at a hospital in New York, physician Solomon Berson (1918–1972) and medical physicist Rosalyn Yalow (1921–2011) observed that prolonged food deprivation (two and a half days without eating) increased the release of growth hormone. They were oblivious, however, to the implications or the reasons for this occurring. “It appeared to be a paradoxical effect,” Donato observes. “Why would a nutrient-deprived body channel its efforts to the energy-consuming process of growth?”

The answer to this question came in the results published in February. To discover how hormones act on the central nervous system, Donato and his team decided to focus their research on the brain rather than on peripheral tissue as other researchers had done. “The action of growth hormone in hunger regulation has long remained elusive,” says Brazilian biochemist Marcelo Dietrich of the Yale School of Medicine, who investigates the biochemical mechanisms that control hunger and satiety.

The first step was to identify the site where growth hormone acts on the brain and its effect on hunger and energy consumption. In an initial test as part of her postdoctoral fellowship under Donato, physiologist Isadora Clivatti Furigo administered growth hormone marked with a substance that allows tracking to healthy rodents. She then examined the hypothalamus, a small region of the brain that controls body temperature, thirst, tiredness, sleep, and of course hunger. She noticed that the hormone bound to cells in at least 10 areas. One in particular caught her eye: the arcuate nucleus. This minute area contains a small group of cells (only a few thousand in mice) known to be involved in regulating food intake and energy expenditure. These neurons, known as hunger neurons, produce two compounds, a neuropeptide known as AgRP and the neuropeptide Y (NPY)—which is why they are also called AgRP/NPY neurons. These compounds act on other areas of the brain, causing the body to yearn for food.

Triggering hunger
The increased concentration of growth hormone in the hypothalamus had the effect of activating hunger neurons. One day after receiving a dose of the hormone, the treated rodents ate more than the mice that had received an innocuous solution (placebo). Animals in the first group also spent less energy than the placebo group, suggesting that high levels of growth hormone in the brain act as a trigger for hunger and energy savings. “This paper has opened up a whole new field of research,” says endocrinologist Cesar Boguszewski, who heads the Neuroendocrinology Unit at the Federal University of Paraná’s (UFPR) university hospital. “If this effect is observed in humans, it may help to understand why weight-loss diets often fail.”

To confirm that the increased hunger was due to the action of this hormone on AgRP/NPY neurons, the researchers decided to make the mice unresponsive to growth hormone. Donato and Furigo received mice that had been genetically modified so that growth hormone receptors would not be present in the entire brain. The genetically modified mice were prepared by molecular biologist John Kopchick, of the University of Ohio, best known for developing a drug that inhibits growth hormone. At USP’s Laboratory of Functional Neuroanatomy, the Brazilian duo used a genetic manipulation strategy called Cre-Lox recombination—which precedes the now-more-popular CRISPR technology—to cause the receptors to be absent only on hunger neurons.

When administered a standard laboratory diet, the mice without growth hormone receptors on the AgRP/NPY neurons ate as much as their non-genetically modified counterparts. They also exhibited similar levels of activity, body weight and body composition (fat mass). But when their diet was restricted to 40% of their normal intake, the mice that had not been genetically modified began to move about less and decrease their energy expenditure. In contrast, the mice with hunger neurons without growth hormone receptors showed virtually no alteration in levels of activity. Consequently, this group lost 20% more weight—primarily fat mass—than the animals in the other group. “Without growth hormone receptor, AgRP/NPY neurons appear to be oblivious to food deprivation,” says Furigo.

In the next phase, the researchers tested something closer to a possible weight-loss treatment for humans. They restricted food intake and gave the rodents two daily doses of pegvisomant, a drug used to treat people with acromegaly—a condition in which the extremities grow abnormally large as a result of excessive growth hormone. In doing so they were attempting to maximize weight loss without genetic modification. With the rodents, it worked. The mice given pegvisomant shed more weight than those in the placebo group because they sustained high energy expenditure even when food-deprived. “This is a proof of concept that it may be possible to use this type of medication to help people achieve weight loss,” suggests Donato. “For people on a diet, a treatment with this compound might make growth hormone levels go back to normal, reducing the sense of hunger while keeping energy expenditure high.”

A boon for dieters
The researchers suspect that the effect observed in mice will also occur in other animals, including humans. “Fundamental survival mechanisms are usually preserved throughout evolution,” says Dietrich of Yale. However, further experiments will be required to confirm the beneficial effect and determine whether it can cause side effects. If it works as expected, it would be a welcome option for treating people who are overweight. There is an urgent need to find effective ways to control obesity, which affects 1.9 billion people worldwide and, in humans, has manifold causes—genetic, environmental, and behavioral.

Although blocking growth hormone could aid weight loss, Boguszewski of UFPR predicts this strategy will be difficult to adopt in clinical practice. “First, it would be necessary to limit the effect to a restricted area of ​​the brain,” says the researcher, who is investigating the peripheral action of growth hormone. Almost all body tissues have receptors for it, and preventing its action can have serious unwanted effects. “We are still at a stage where we’re trying to better understand how the hypothalamus functions before we begin to think about more effective therapeutic strategies,” says Velloso. “From a biological point of view, this is our protection from death by malnutrition.”

Leptin is a hormone produced by adipose tissue that became known as the “satiety hormone” after its discovery in 1994. Leptin signals to the brain whether the body’s energy stores in the form of fat are adequate or whether food intake is needed. This, however, is not its only function. Early in life, it plays an important role in the development of the brain and the immune and reproductive systems. It remains to be determined whether the effects of leptin deficiency are reversible.

“Some are; while others are only partially reversible,” says physiologist José Donato Junior of USP. Angela Ramos Lobo and Donato, her doctoral advisor, developed a sophisticated strategy to make this determination. They deactivated the gene coding for leptin receptor in mice. The rodents would continue to produce leptin, but it would have no effect.

The researchers reactivated this gene in the fourth week of life of one group of animals and in the tenth of another—these ages correspond to the end of childhood and adolescence in humans—and monitored them over another six months of follow-up.

Like animals unable to produce leptin, the mice deprived of leptin in early life ate too much, spent little energy, and were obese and infertile. Their brains were also 10% smaller than in mice in the control group.

Once the action of leptin was restored, the animals began to eat less, lost weight, and partially recovered normal brain development. But they remained obese, infertile, and more prone to diabetes, according to an article published January 29 in eLife. “Leptin signaling early in development establishes a pattern of energy expenditure,” explains Donato.

We suspect these findings can also be applied to humans. Although leptin deficiency is extremely rare (there are about 30 known cases worldwide), impaired leptin signaling—in which the body produces the hormone but fails to recognize it—is common as a result of nutritional deficiency or being overweight during childhood. “In these cases, acting early to replace or change eating habits is important to ensure optimal development,” says Lício Velloso, of UNICAMP.