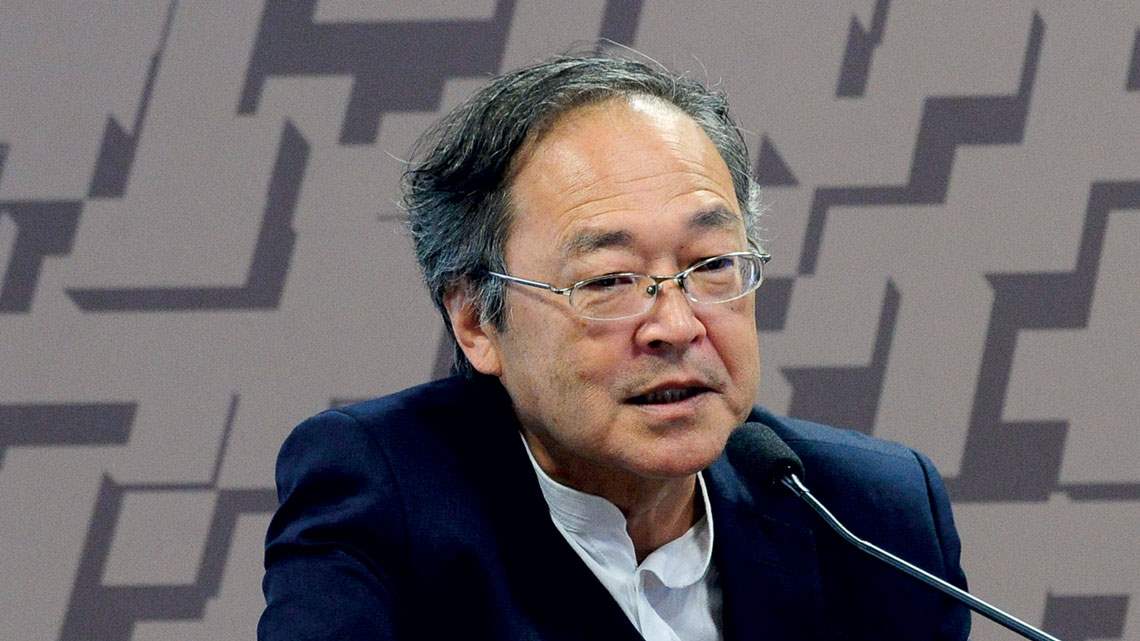 Takahashi at a Federal Senate hearing in October 2017

It is impossible to tell the story of the internet in Brazil without mentioning computer scientist Tadao Takahashi, who died unexpectedly of a heart attack on April 6. Born in Marília, São Paulo State in 1950, he played a fundamental role in the planning, implementation, and development of the internet in the country. In the 1980s, Takahashi helped create the National Research Network (RNP), an organization linked to Brazil’s now-defunct Ministry of Science and Technology (MCT), designed to provide the infrastructure for a national academic network. The RNP was responsible for establishing the first backbone (physical network structure) for the internet in Brazil at the beginning of the following decade.

“The RNP was founded in September 1989 at the SUCESU [Society for Computer Equipment Users] conference. A few months earlier, together with FAPESP, we had created the Academic Network of São Paulo [ANSP], whose objective was to connect teaching and research institutions in São Paulo,” recalls computer scientist Demi Getschko, who was head of the the ANSP network.

“At the time, Takahashi was working with the CNPq [Brazilian National Council for Scientific and Technological Development]. He was the great strategist and proponent for the creation of a national network, which would serve as an embryo for the commercial internet in the country,” says Getschko, currently in charge of the Brazilian Network Information Center (NIC.br), the executive branch of Brazil’s Internet Steering Committee (CGI), responsible for coordinating internet services in Brazil.

“The RNP was very advanced for its time. In its early days, the internet in Brazil was limited to academia. Takahashi foresaw its importance to society and science as a whole,” explains Virgílio Augusto Almeida, professor emeritus at the Department of Computer Science (DCC) of the Federal University of Minas Gerais (UFMG).

As head of the RNP between 1988 and 1996, Takahashi also participated in the creation of the CGI and served on its board from 1995 to 2003. In the late 1990s, he was responsible for establishing the Brazilian division of the Internet Society (ISOC), an organization formed in the USA in 1992 by American internet technology pioneers Robert Kahn, Vinton Cerf, and Lyman Chapin.

Working on several fronts, Takahashi created the Information Society program (SOCINFO), a federal government initiative for coordinating and strategically expanding the use of the internet in Brazil in several areas, such as education, health, and the government, and directed it from 1998 to 2003.

“Takahashi heavily influenced the conception of Brazilian internet governance with multisectoral participation, which resulted in the formation of the CGI. This model received and still receives a lot of praise from the international community and it served as an inspiration in countless other countries,” says Ivan Moura Campos, professor emeritus at DCC, UFMG, who also actively participated in the internet’s implementation in Brazil.

In a statement, the RNP mourned the loss of its founder and highlighted his contribution to the country’s digital advancement. “The legacies he has left in Brazil and Latin America include the training of people in strategic fields, especially in education and research, the development of public policies for the information society, and the expansion of the internet.”

In 2017, the researcher and RNP founder became the second Brazilian inducted into the Internet Hall of Fame

Roots in the classroom

Takahashi graduated in computer science from the University of Campinas (UNICAMP) in 1972, and in social communication from the Pontifical Catholic University of Campinas (PUC-CAMPINAS) the following year. He began his academic career in the mid-1970s as a professor at the newly created Department of Computer Science (DCC) at UNICAMP’s Institute of Mathematics, Statistics, and Scientific Computing (IMECC).

“At the time, UNICAMP had one single computer, an IBM 1130, which had 32 kilobytes of RAM and a 5-megabyte hard drive, connected to a printer and a punched card reader. Early programming courses put a significant burden on this machine,” UNICAMP said in an obituary for Takahashi.

“One of Professor Takahashi’s first initiatives at UNICAMP was to purchase a Fortran Coppefor compiler, made at COPPE, UFRJ [Alberto Luiz Coimbra Institute for Graduate Studies and Research in Engineering at the Federal University of Rio de Janeiro], to speed up the compilation process, reducing the computer’s workload and making life easier for students.”

In 1976, Takahashi took a temporary leave of absence from the university to pursue a master’s degree in technology and computing at the Tokyo Institute of Technology in Japan. After completing the course, he returned to UNICAMP in 1979, where he remained until the following decade. He spent some time working at the Telecommunications Research and Development Center (CPQD) in Campinas and then CNPq.

Getschko recalls that he started a PhD but did not finish it. “He was not a researcher in the sense of writing papers in the field. He was more of a research manager. He was very well informed and had a deep understanding in many areas of knowledge.”

Another important contribution by Takahashi was to the organization of the document Information Society in Brazil – Green Book, released in 2000. “The paper, which was written in collaboration by more than 20 specialists from academia, the government, and the private sector, reflects his visionary character. It presented a plan for Brazil to more concretely insert itself into the information society, where computing would play an important role not only in the economy, but in society and government,” highlights UFMG’s Almeida, who participated in the initiative. “Takahashi had a broad view of the world; he was not a typical bureaucrat nor was he attached to specific positions. He wanted to build things.”

Silvio Meira, professor emeritus at the Informatics Center of the Federal University of Pernambuco (UFPE), remembers Takahashi as a perfectionist, both reserved and demanding, a rounded person with whom you could talk about anything. “He always had a point of view, much more than just an opinion, that you had to pay attention to and reflect on,” says Meira, who worked with him on several projects.

In 2017, the RNP founder became the second Brazilian to be inducted into the Internet Hall of Fame. Considered the highest honor for professionals in the field, the acknowledgement by the Internet Society recognizes individuals who have significantly contributed to the development of the global internet. Other members of this esteemed group include Cerf, who was one of the fathers of the internet and cocreator of the TCP/IP data transmission protocol, and Tim Berners-Lee, inventor of the World Wide Web.

The first Brazilian inducted was Getschko in 2014. After him, only three others from the country have been added to the Hall of Fame: Michael Stanton, former RNP director and professor at Fluminense Federal University (UFF) in 2019; Liane Tarouco, a researcher at the Federal University of Rio Grande do Sul (UFRGS) in 2021; and Carlos Afonso, CEO of Instituto Nupef, which implements community networks in low-income areas in northern Brazil, also in 2021.