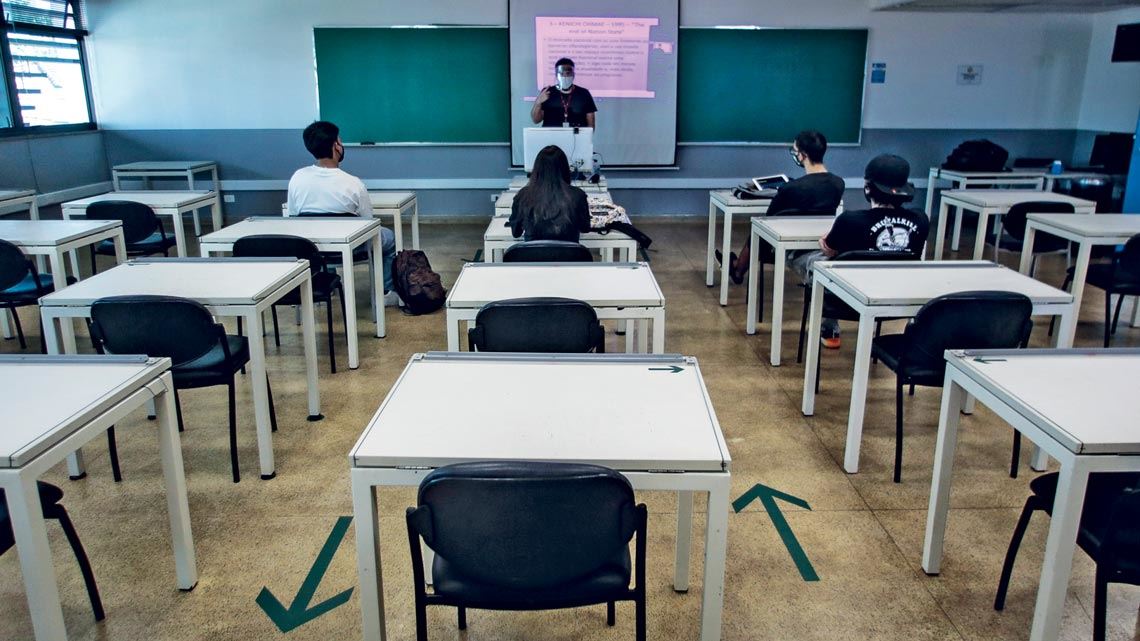 Students at Belas Artes University in São Paulo take part in an in-person extracurricular classroom activity in October, in preparation for returning to classes

On November 19, New York mayor Bill de Blasio announced the temporary closure of the city’s 1,800 public schools in response to an increasing number of COVID-19 cases. The move means 300,000 students who had resumed face-to-face classes in September will now return to distance learning, joining the other 800,000 students in the city’s school system who had chosen to continue online to avoid infection. The decision was met with criticism—some 60,000 students, many of whom are among the most socially vulnerable, do not have access to online education, and the school environment had seemed safe: only 0.19% of the 120,000 students, teachers, and school employees tested had received a positive result.

Outside schools, however, contamination has been rising. New York was the epicenter of the pandemic’s first wave in the USA. The death toll in the city stands at 24,000 people and is growing again. There were 48 fatalities on November 20, more than double the daily average at the beginning of the month. Schools were closed after the test positivity rate in the city hit a seven-day rolling average of 3%. “We set a very clear standard, and we need to stick to that standard. We intend to come back and come back as quickly as possible,” explained Blasio, according to Time magazine. According to the World Health Organization, there are factors that should guide the closure or reopening of schools: the transmission and severity of the disease among children and adolescents, the ability to implement prevention and control measures in schools, and the general epidemiological situation in the region. In New York, the latter was rising beyond control.

According to UNESCO data, the first wave of the pandemic disrupted school activities in more than 190 countries, affecting 1.57 billion people, equivalent to 90% of the world’s students. But contrary to Brazil, most nations resumed face-to-face education by the middle of 2020, while maintaining some activities online and adopting restrictive measures. The process has been full of surprises, but it has shown that with hygiene measures, social distancing, and the containment of new cases, schools do not cause outbreaks of the disease as was feared. France has kept schools reopened since May, despite the second wave of the pandemic. Since the school year started in September, dozens of schools have suspended classes after recording cases of the disease, but according to the country’s Ministry of Education, almost all episodes involved contamination outside the school environment and did not trigger outbreaks of the disease. 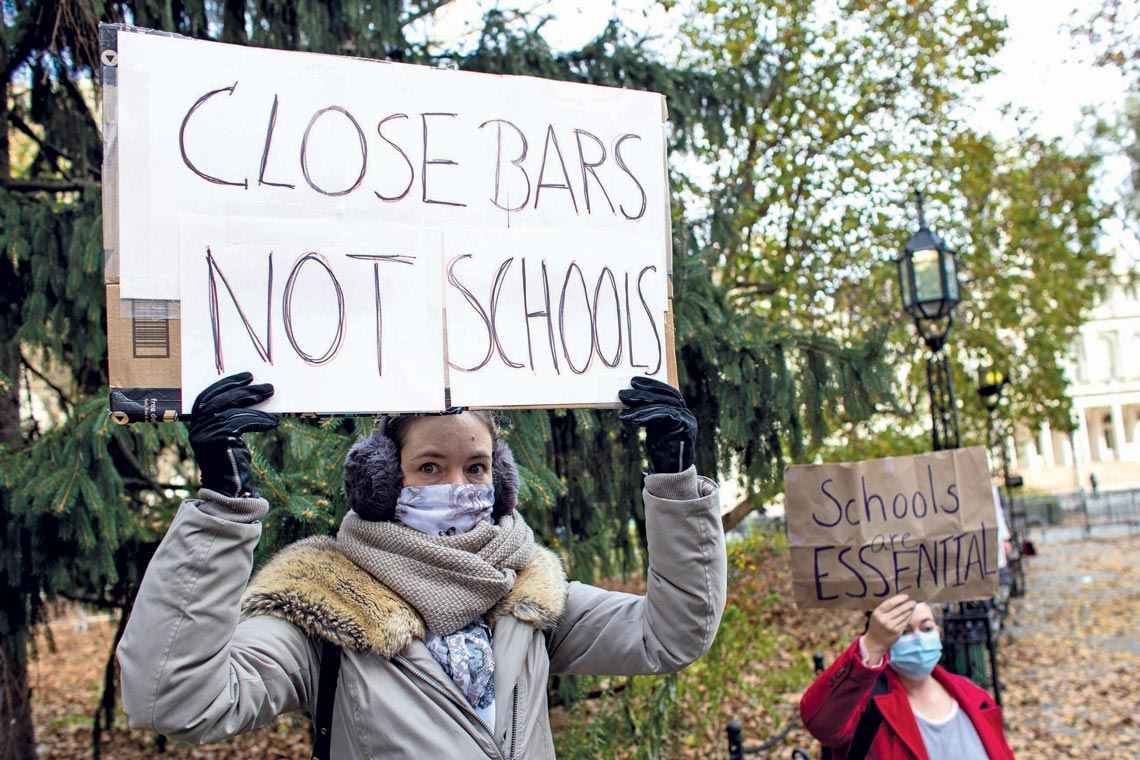 Strict compliance with safety protocols is essential. One of the worst COVID-19 outbreaks in Israel occurred at Gymnasia Ha’ivrit, a school in Jerusalem, which resumed classes in May without instituting the necessary precautions. With small, crowded classrooms, six days of classes per week, and the use of masks optional due to the heat, the school was forced to close after 150 of its 1,200 students caught the disease, also contaminating 25 education workers and 80 family members.

Children and young people are not a group at risk of COVID-19 and in the vast majority of cases experience mild symptoms. In Brazil, between 0.6% and 0.7% of all deaths from the novel coronavirus were aged under 20, according to data from the Brazilian Society of Pediatrics (SBP). In Sweden, a rare example of a European country that has not adopted strict containment measures, the risk of students contaminating family members was not considered high in the first wave of the pandemic. The authorities allowed elementary schools to function as normal but closed high schools, which switched to online classes. A study by researchers from Stockholm University and Uppsala University, shared on the medRxiv repository in October, showed that exposure to the disease among parents of students at schools that remained open only led to a slight increase in cases compared to the populational average. A significant impact was observed among teachers, however, whose infection rate was twice as high among those who continued with face-to-face activities.

In favor of reopening schools, there are obvious findings about the harm to children’s education, not to mention the effects of social restrictions on the mental health of children and adolescents. “Keeping schools closed has high direct and indirect costs, which affect students, their families, and society as a whole,” says psychologist Teresa Schoen, from the Federal University of São Paulo (UNIFESP). “By staying away from schools, children and teenagers protect themselves from the disease, but they are not immune to the risks of domestic violence and even a lack of regular food.”

Schoen works at an adolescent health clinic at UNIFESP and is supporting the debate on reopening schools in Brazil, having grown concerned about the emotional impact the pandemic is having on young people. Together with graduate student Letícia Soares, whose work she is supervising, she mapped the measures adopted when schools were reopened in 13 countries (see table) and published the results on the SciELO Preprints repository.

All countries implemented measures related to social distancing, good hygiene, and identifying suspected cases, but the parameters differed—the space between students, for example, varied from 1 meter to 2.5 meters, depending on the country. The use of masks in schools was also approached in different ways. Only in Portugal were they compulsory. In Canada, masks are encouraged for older children, while students in Spain do not need to wear one as long as they remain 1.5 meters or more from other people.

The measures, however, were not specific regarding mass testing to quickly identify outbreaks of the disease. “Because an estimated 40% of COVID-19 cases are asymptomatic and 50% of transmissions occur from asymptomatic persons, testing is critical,” wrote physician Yasmin Rafiei and law scholar Michelle Mello from Stanford University, USA, in an opinion piece published in the New England Journal of Medicine. Mass screening, they say, does not feature on school reopening plans in most American cities. In general, only individuals with symptoms are tested.

Even testing a large enough number of symptomatic cases would have a positive effect, as shown by UK researchers in an article published in The Lancet Child & Adolescent Health. The objective of the study was to establish parameters for preventing a second wave of the pandemic in the UK. Based on mathematical models, the authors concluded that if 75% of individuals with symptoms were tested, and at least 68% of people who had contact with those infected were screened, schools in the UK could safely reopen full-time. If only 65% of symptomatic individuals were tested, classes could only be partially resumed safely.

In September, the Organization for Economic Cooperation and Development (OECD) released its annual Education at a glance report, which presents educational statistics from more than 40 countries. The document highlighted that Brazil was one of the most resistant to resuming face-to-face classes, unlike the majority that had reopened schools by July. The document correlates the suspension of classes with loss of skills among students and damage to economic productivity.

Since September, eleven Brazilian states have announced plans to gradually reopen schools. A resolution approved by the Brazilian National Education Council (CNE) in October established a roadmap for a progressive reopening process, including the transformation of the 2020 and 2021 academic years into one single curricular block to allow all students to pass this year. “We recommend that schools start 2021 with recovery activities and assessments that consider the unequal conditions faced by students,” said sociologist Maria Helena Guimarães de Castro, a retired professor at the Institute of Philosophy and Human Sciences (IFCH) of the University of Campinas (UNICAMP), in a statement issued by the CNE.

The inequality that already marked the Brazilian educational system has become even more acute during the pandemic. “It is going to be a challenge dealing with groups of students at very different stages of learning and combining face-to-face and remote activities,” says Castro. Schools have been advised to alter their curricula to prioritize the most essential skills and abilities, such as reading, writing, problem solving, and creative thinking. “Pedagogical teams will need to use their common sense and insight to emphasize these skills and to enable students to continue to learn without being left behind. Another important task is to actively encourage attendance, given that students aged 15 are more likely to drop out or skip classes.” Castro notes that the situation is different in private schools. “Surveys show that they have managed to effectively institute remote education, but we will get a better idea of just how effectively now, as they resume face-to-face activities,” she says.

Several private schools have hired hospital consulting services to help design safety protocols for reopening. Hospital Israelita Albert Einstein in São Paulo is assisting 20 schools, adapting hygiene and social distancing measures to the physical school structure and training teachers and other staff. Some private schools already reopened in October but had to suspend classes again after cases of the novel coronavirus were recorded. One was Graded, a school located in the São Paulo neighborhood of Morumbi, which sent a letter to parents warning that hundreds of students had attended parties and events with large numbers of people, putting the school’s efforts to guarantee a safe environment at risk.

Public universities are also making arrangements to resume in-person classes. Most federal universities maintained essential activities, but suspended classes in the first semester of the year, before resuming remotely in the second. State universities in São Paulo began offering online classes at the beginning of the pandemic and employees have been gradually returning since September. UNICAMP, for example, made its schedule for reopening conditional on how the pandemic continues to evolve in the state. With the number of cases falling, in October 20% of employees began resuming face-to-face activities every two weeks. Practical subjects that cannot be taught online are scheduled to restart in January. “We created 10 working groups to discuss the different aspects involved, resulting in a progressive strategy for a safe return,” says José Antonio Rocha Gontijo, chief of staff at the UNICAMP dean’s office and a professor at the university’s School of Medical Sciences.

It was established that employees must take COVID-19 tests before returning to campus and that they will be required to answer questions about their health every day via an app—if they experience any symptoms, they will stay home and seek medical assistance. Almost 3,000 tests have been done so far, with only 10 positive results. At the end of November, the process was slowed down due to an increasing number of cases in the Campinas region. “The situation has worsened and we need some time to assess what will happen next,” says Gontijo. The University of São Paulo (USP), which also formulated a plan for gradually reopening, announced in November that it would no longer be mandatory for employees to return, due to an increase in cases in the state of São Paulo.

The possibility of a second wave that might jeopardize the slow return to school concerns educators. “Schools develop essential public policies that guarantee the future of our children and young people, and they cannot remain closed any longer,” says Maria Helena Castro. “If a new quarantine is needed, close the bars and shopping centers, but not schools.”