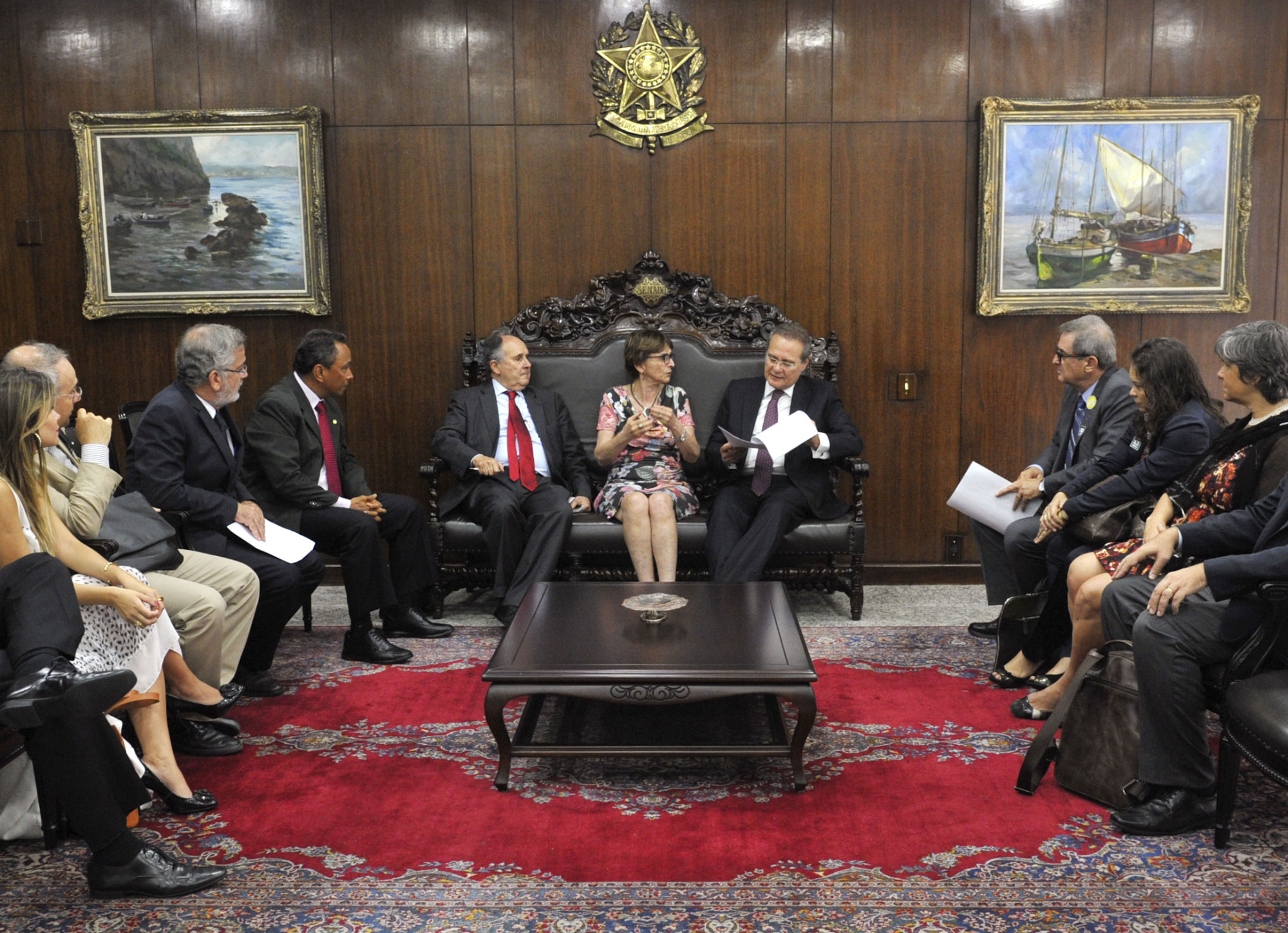 Helena Nader from the SBPC, sitting beside Senator Cristovam Buarque (left) in a meeting of the Committee for Science, Technology, and Higher Education Institutions in 2016, where she delivered a letter to Senator Renan Calheiros (right) calling for the rejection of the President’s vetoes to the Legal Framework

In June 2018, the Brazilian Society for the Advancement of Science (SBPC)—alongside the Brazilian Academy of Science (ABC), the Brazilian Association of Directors of Federal Higher Education Institutions (ANDIFES), and the National Council of State Research Funding Agencies (CONFAP)—spearheaded a group of 56 research and education institutions in signing a message of protest against federal budget cuts to science and technology programs. The message, which was delivered to the president of Brazil, the ministers of Science and Technology and Education, and the presidents of the Brazilian House of Representatives and Senate, is an example of the endless battles the SBPC has fought in defense of Brazilian research since the Society was founded in 1948, in São Paulo.

While its successes may have been fewer than SBPC officials would have hoped for, they and academic scholars more broadly believe the Society has played a vital role in raising the profile of Brazilian science, professionalizing science careers, bolstering the movement to create state research funding foundations, and broadening discussion on science and technology, innovation, and higher education. The SBPC has made its voice heard—whether invited or otherwise—on many occasions over the years, from the Constituent Assembly in 1988 to the Forest Code in 2012 and the Legal Framework for Science and Technology in 2017. Its advocacy has sometimes been discreet, in meetings behind closed doors with deputies and senators, and sometimes public, as in the March for Science, in which hundreds of people rallied in several Brazilian cities in 2017 calling for investment in the sector.

The SBPC emerged in conflictuous times. In 1948, the governor of São Paulo, Adhemar de Barros (1947–1951), decided to cut down on any research at the Butantan Institute not directly linked to the production of antivenom. The director of the institute, Eduardo Vaz (1947–1951), proceeded to terminate researchers in the fields of ​​chemistry and endocrinology. The researchers’ dismissal mobilized other scientists in São Paulo and ultimately led to the creation of the SBPC. “The protesting researchers were unable to prevent the termination of the Butantan scientists, who would later return to their post, however, after Vaz was replaced by a new director in 1951,” remarks sanitary physician Nelson Ibañez, a coordinator at the Special History of Science Laboratory at Butantan Institute, who described this episode in a 2006 article in the journal Cadernos de História da Ciência.

The 10 researchers who lost their positions at FIOCRUZ in 1970, in a photo from the 1980sJosé De Carvalho Filho/Casa de Oswaldo Cruz archives

In 1949 the SBPC launched the journal Ciência e Cultura, featuring science articles written by researchers, and began organizing annual meetings—the first in Campinas. The Society soon found itself embroiled in other disputes. It put pressure on leaders in the science community to have the São Paulo State Government implement an article of the 1947 Constitution that called for the creation of a foundation to support science research. Their demands were met in 1960 with the founding of FAPESP, which began operation in 1962. During that period, SBPC played an important role in gaining social recognition of the value of what scientists do, and in advocating for better wages and full-time employment, comments political scientist Antonio José Junqueira Botelho, a professor at the University Research Institute at Universidade Cândido Mendes in Rio de Janeiro, writing in a 1990 article in Social Studies of Science.

In 1964, the newly installed military government ousted 85 intellectuals and university professors, among them educators Anísio Teixeira (1900–1971) and Paulo Freire (1921–1997), and anthropologist Darcy Ribeiro (1922–1997). The SBPC expressed its concern about the dismissals and persecution of professors and researchers, which intensified in 1968 with the promulgation of Institutional Act No. 5. In April 1970, the government ordered the suspension of political rights and the compulsory retirement of a group of 10 researchers from the Oswaldo Cruz Institute in Rio de Janeiro. Among them was physician and entomologist Herman Lent (1911–2004), one of the founders of the SBPC, who in 1978 described the episode in his book O massacre de Manguinhos (The Manguinhos massacre; Avenir). The Rio de Janeiro newspaper Correio da Manhã reported the collective dismissals on April 3, 1970, under the headline “Médici punishes scientists.” The journal Ciência e Cultura reproduced the article, and the Guanabara State Medical Association sent a letter to the president of Brazil—which was reproduced in the Correio—requesting, albeit to no avail, that the order for the researchers’ dismissal be withdrawn.

“The SBPC took a clear political stance against the dictatorship, but its biggest concern was government interference in the scientific community,” says physicist Sergio Rezende, a former minister of Science and Technology (2005–2010) and now a professor at the Federal University of Pernambuco and honorary president of the Society. Many scientists from various fields of knowledge who supported the SBPC were arrested—and some were tortured—for their stand against the military government. Some of them went into exile; others decided to take their chances and stay in Brazil. Physicists, in particular, openly criticized the military government, risking their own academic careers, wrote physicist Olival Freire Júnior, a professor at the Federal University of Bahia (UFB), in a 2009 article in Boletim do Museu Paraense Emílio Goeldi.

Funding for research institutions began to dwindle in the 1970s, as the economy entered into decline. “Money from the military regime accrued less and less to scientists, who until then had been privileged recipients,” says sociologist Ana Maria Fernandes (1948–2018) in her book A construção da ciência no Brasil e a SBPC (The rise of science in Brazil and the SBPC; Editora UnB, 1990). At around this time the SBPC became more vocal on economic, social, and political issues, and began to demand the reinstatement of professors who had been compulsorily retired (the Manguinhos professors would be rehired in 1979 and subsequent years).

From the mid-1970s onwards, “the SBPC became a place where scientists who wanted to engage in debate could congregate,” says anthropologist Otávio Velho, a professor emeritus at the National Museum of the Federal University of Rio de Janeiro (UFRJ), and a former secretary and vice president and now honorary president of the Society. “After it joined other associations in the fight for democracy, the SBPC was no longer solely concerned with advancing science, and its agenda became somewhat fragmented,” says Junqueira Botelho, now a visiting professor at Sophia University in Tokyo, Japan. Science had become more complex, he notes, with federal and state universities playing a more active role, and with other associations vying for space in the science scene, such as the Brazilian Society of Physics (SBF), created in 1966 during the annual SBPC meeting in Blumenau, Santa Catarina.

The Constituent Assembly is held in 1987 to adopt the 1988 Constitution, which mandated the creation of new state foundations to support researchAgência Brasil

After the oil crisis in 1973, when fuel prices skyrocketed by 400%, the military government, which had already initiated construction of the Angra I nuclear power plant, became even further vested in nuclear energy as a solution to alleviate the energy crisis. “Scientific societies and the SBPC were strongly opposed,” recalls physicist José Goldemberg, a former president of SBF (1975–1979) and SBPC (1979–1981) and now president of FAPESP. “Despite its clashes with the authoritarian government, the SBPC was never shut down by the military,” Goldemberg notes.

In a 15-page document written in March 1987, the SBPC’s Commission for Constitutional Studies, led by sociologist José Albertino Rodrigues, a professor at the Federal University of São Carlos (UFSCAR), presented a series of governance recommendations for education, health, territorial space, indigenous peoples, and science and technology. The Constitution passed the next year, on September 22, 1988, and promulgated on October 5, provided in article 218, paragraph 5, that: “States and the Federal District may allocate part of their budget to public organizations engaged in education and scientific and technological research.” In drafting their own Constitutions, 21 states called for the creation of funds or foundations to manage funding for education and research. Seven state research foundations were then already in operation in São Paulo, Minas Gerais, Rio Grande do Sul, Rio de Janeiro, Alagoas, Pernambuco, and Maranhão, and another two had been legally organized in Paraíba and Ceará. The SBPC supported the creation of further foundations, working with FAPESP officials Flávio Fava de Moraes, Francisco Romeu Landi (1933–2004) and Alberto Carvalho da Silva (1916–2002).

“In the last 14 years, there have been many successful efforts to advocate a modern approach to governance in science and technology and higher education,” says biochemist Helena Nader, a professor at the Federal University of São Paulo (UNIFESP). She served for three terms as president of the SBPC (from 2011 to 2017) and for two terms as vice president to mathematician Marco Antonio Raupp (2007–2011), whom she replaced when he left for the Brazilian Space Agency.

The March for Science in 2017, in São Paulo, against federal budget cuts to science and technology programsAdriano Vizoni /Folhapress

One of the Society’s greatest battles under Raupp was the Forest Code. The SBPC and ABC were in disagreement with the Federal Government’s proposed wording, so they formed a working group. One of the results from their efforts was the book O Código Florestal e a ciência: Contribuições para o diálogo (The Forest Code and Science: Contributions to the debate; SBPC and ABC), launched at the National Congress in Brasília, in 2011. “The Forest Code would have been the worse without our input. We succeeded in widening the protected buffer zones along rivers. We were unable to include mangroves as a strategic ecosystem, but we will keep trying,” she says. “Dialog with congressmen is difficult but possible.”

There have also been defeats. The most recent, Nader says, was the approval of Constitutional Amendment 95/2016, which froze public spending across the board, including funding for universities and research centers. “I wrote articles, I spoke to ministers and congressmen. They could have rejected it, but chose not to for lack of awareness of the impact that science, technology, and innovation has on a country’s economy.”

Now as honorary president, Helena will attend a hearing at the Brazilian Supreme Court in July on the decriminalization of abortion, one of the causes the Society has more recently embraced. The book A ciência e o Poder Legislativo no Brasil (Science and Brazil’s Legislative Branch; SBPC, 2017) describes some of the Society’s biggest battles, and many more are sure to come. In a 2008 article in Folha de S.Paulo, Raupp wrote: “Several decades of struggle will still be needed to put Brazilian science not only on an equal footing with the world’s most advanced nations, but—above all—at the service of the country’s social and economic development.”

> The next article in the series will describe the SBPC’s efforts in science outreach.