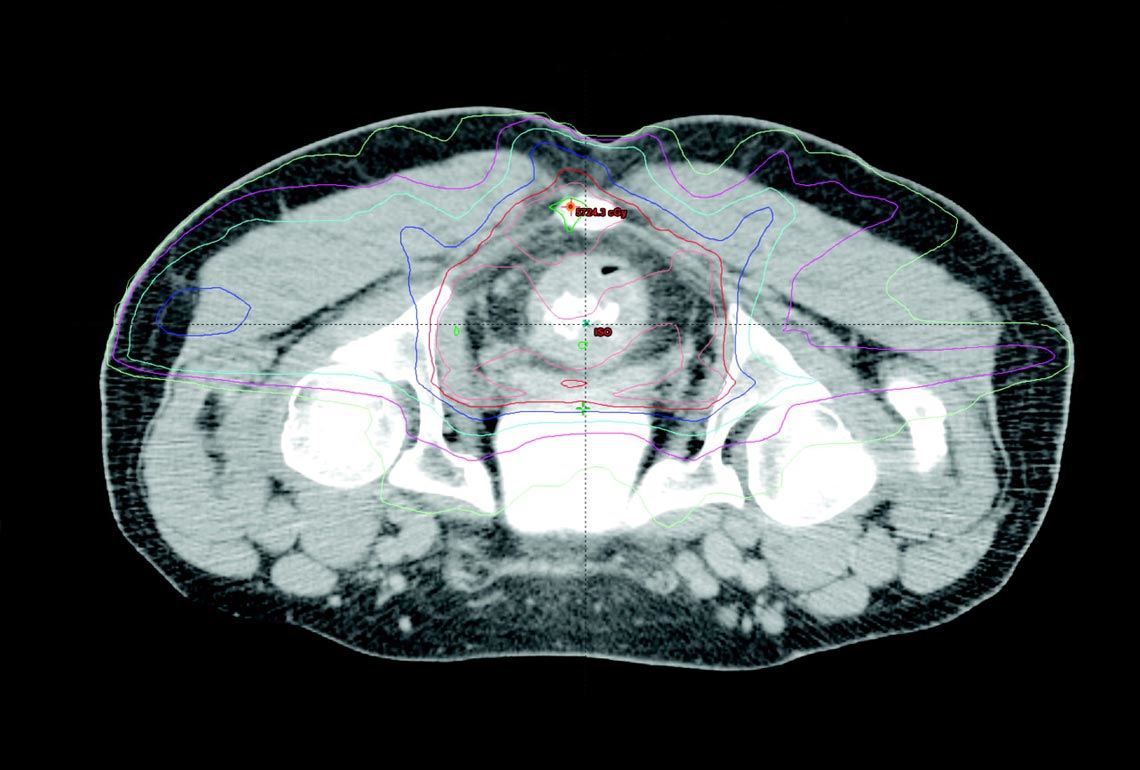 Axial view of a patient undergoing radiation therapy for a rectal tumor which, if successful, could avoid the need for surgery

Back in 1991, after operating on a patient with rectal cancer to remove the lower portion of her rectum, including the anus—a procedure that requires creating an outlet for the feces to be expelled into a bag worn around the patient’s abdomen (colostomy)—Angelita Habr-Gama, a surgeon and director at the Angelita and Joaquim Gama Institute in São Paulo, noticed that the part she had removed no longer had any traces of the tumor. When she told her patient the news that she was cured, Habr-Gama was asked in reply: “If I was tumor-free, why did you operate on me in the first place?” “I explained that that was the standard protocol,” recalls Angelita, as she prefers to go by. “From then on I decided not to operate on patients immediately if they were tumor-free after radiation and chemotherapy. People said I was being imprudent,” she recounts. Her unorthodox method was met with harsh criticism before it eventually gained greater acceptance in the medical community. Now, an international study published on December 11 in The Lancet Oncology—in which Habr-Gama and colleagues analyze medical record information on 793 patients in 15 countries who were treated without immediate surgery—provides further evidence supporting her approach. The results suggest that those patients who were recurrence-free three years after diagnosis had less than a 5% risk of tumor regrowth and only a 2% risk of metastasis.

The researchers analyzed data from 47 clinics where patients had been treated between November 1991 and December 2015. The data were compiled from the International Watch & Wait Database (IWWD), a registry of patients who have been managed by what Habr-Gama has dubbed a “watch-and-wait” strategy. In this strategy, radical surgery is not prescribed immediately if patients achieve what is known as a clinical complete response, or full regression of the tumor, following radiation and chemotherapy. In these cases, the patient is followed closely with digital rectal examinations, proctoscopy, magnetic resonance imaging, and endoscopy every two or three months during the first year of follow-up. If tumor regrowth is detected, then surgery is prescribed.

The most notable finding in the paper is in its analysis of conditional survival, or the chances of a patient remaining disease-free after each year without tumor regrowth. After 12 months, the likelihood of the tumor not recurring in the next two years is 88%. After three years, the likelihood of remaining disease-free for an additional two years rises to 97%. For a patient who is regrowth-free after five years, the risk of the tumor recurring is just 1%.

“With every year without recurrence, survival rates improve. This is a significant finding, as we normally follow patients very closely and require them to undergo a series of exams and tests for fear of the cancer returning. However, our research found that after a person has been tumor-free for three years, the risk of relapse becomes negligible,” says lead study author Rodrigo Oliva Perez, who also works at the Angelita and Joaquim Gama Institute. “The rectum remaining cancer-free is the best predictor of a reduced risk of recurrence.”

A second important finding from the study, says Perez, is the absence of a correlation between the stage at which the primary tumor is diagnosed and the risk of recurrence over time when the nonsurgical approach is used. A primary tumor is classified on a scale of T1 (superficial) to T4 (more advanced) depending on how deeply it has grown into the rectum wall, in a process that oncologists refer to as staging. “After the first year without tumor regrowth, the chances of recurrence are virtually the same regardless of the dose of radiation and chemotherapy or the tumor stage on initial diagnosis,” explains the surgeon.

Habr-Gama had already suspected that every year under the watch-and-wait strategy meant a better response to treatment. “In managing my patients, I realized that recurrence was more frequent in the first year. Our paper has now confirmed and put these clinical observations into numbers,” she says. Oncologist surgeon Samuel Aguiar Júnior, head of the Colorectal Tumor Unit at the A.C.Camargo Cancer Center in São Paulo, who was not involved in the study, believes the new findings have particularly significant implications for follow-up protocols for patients who opt out of surgery. “In showing that the risk of tumor recurrence drops dramatically after three years, the article supports the idea that, after this period has passed, patient follow-up with imaging and consultations can be less intense. This is highly significant, as there is currently no consensus on how often and for how long these patients require close follow-up,” explains Aguiar Júnior.

For Habr-Gama, the better quality of life that rectal cancer patients can enjoy by keeping an intact rectum needs to be taken into account whenever possible. Today, more than 30% of patients with this type of tumor have a complete clinical response to radiotherapy. Radical operations can result in fecal incontinence and sexual dysfunction, not to mention the need for a temporary or permanent colostomy. “Data from previous studies has already shown that the risk of metastasis in non-operated patients is 10% in the first year, the same as in patients who undergo radical surgery. So why not try to preserve the rectum?” argues the 87-year-old surgeon, who recovered from COVID-19 in May after spending 40 days in the Intensive Care Unit (ICU) at the Oswaldo Cruz German Hospital in São Paulo (see Pesquisa FAPESP issue no. 298). Having now returned to work, in addition to running her medical practice Dr. Habr-Gama is compiling a regional database on patients who have been managed by the watch-and-wait approach in Latin America.

Despite the criticism she has received in the past, the option not to operate immediately after a complete clinical response is beginning to find greater acceptance among specialists. “The data now available is compelling enough to recommend the watch-and-wait strategy as the first-line treatment for this type of cancer, especially in patients for which a rectal resection would otherwise be indicated,” says Aguiar Júnior. However, he notes that most patients with rectal cancer—approximately 70% to 75%—will not have a complete clinical response after radiation and chemotherapy, and will need surgery to increase their chances of survival. “That makes it highly important to accurately determine whether there has been a complete clinical response with radiation and chemotherapy alone. The option for non-operative management should be discussed by a multidisciplinary team, and information needs to be shared with and the decision made by the patient,” he says.