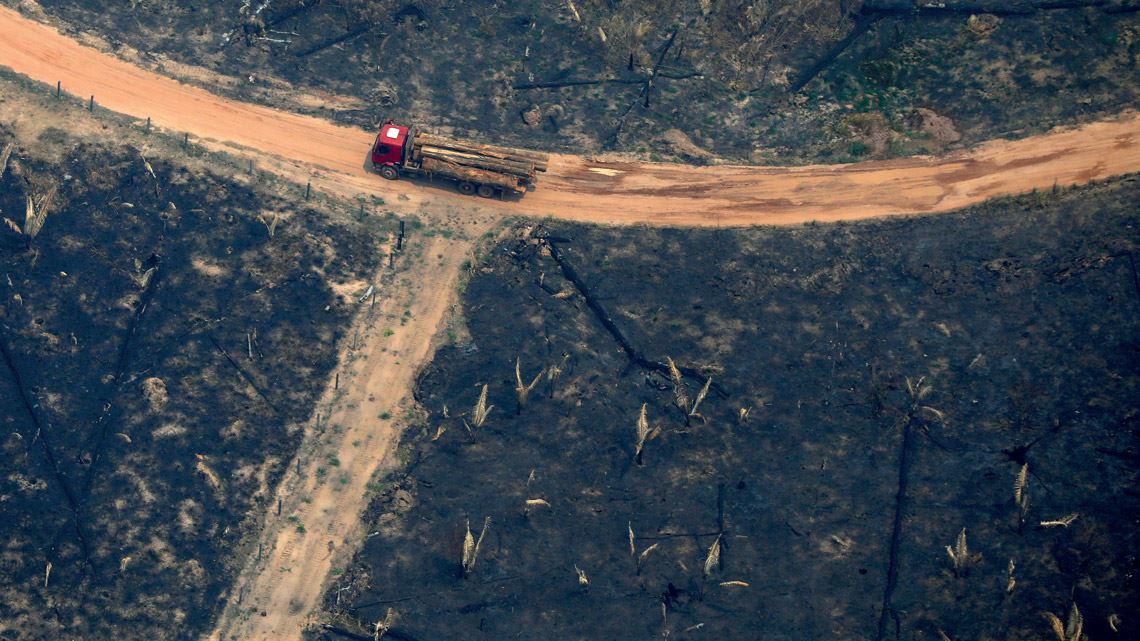 Boca do Acre, in the state of Amazonas, where 1,260 km2 were deforested in 2019, according to a report by MapBiomas

Almost 97% of the land deforested in Brazil last year was located in its two largest biomes, the Amazon and the Cerrado (wooded savanna), which cover half and just over a fifth of the national territory, respectively. In 2019, some 12,000 square kilometers (km²) of native vegetation were cleared in the country, equivalent to one and a half times the size of the São Paulo Metropolitan Area. Of the deforested area, 63% was in the Amazon and 33.5% in the Cerrado. In the other ecosystems (the Pantanal, Caatinga, Atlantic Forest, and Pampas), a total of about 400 km² was deforested (see sidebar). Half of the cleared area was concentrated in three states: Pará (2,990 km²), Mato Grosso (2,020 km²), and Amazonas (1,260 km²). Fifty municipalities, mostly from the North, accounted for 50% of all deforestation.

The data is from the First annual report on deforestation in Brazil, published at the end of May by MapBiomas, an initiative that aims to map land use in the country, run by the Climate Observatory, a nongovernmental organization (NGO) comprised of 36 Brazilian civil societies. According to the document, more than 99% of the deforestation was illegal, involving clearing without authorization or in prohibited areas. “Brazil clears more forest than any other country in the world. Indonesia, which is in second place, deforests less than half of the area removed in Brazil each year,” says forest engineer Tasso Azevedo, general coordinator of MapBiomas. The Asian country, however, which is home to 260 million people, is only a quarter of the size of Brazil.

The report counts deforested areas above 0.003 km² (3,000 square meters), approximately half the size of a soccer field. By cross-referencing data from the Rural Environmental Registry (CAR) with vegetation clearing permits and forest management plans, the initiative also identified where deforestation occurred in conservation units and indigenous reservations. In 2019, there was at least one deforestation alert in 16% of the 1,453 areas listed in the National Register of Conservation Units and in 37% of the 573 indigenous reservations in Brazil.

Using its own methodology to determine the situation in each biome, the results are based on deforestation data from three different public, free-to-access monitoring programs. For the Amazon, it used alerts issued by the Real Time Deforestation Detection System (DETER), operated by the Brazilian National Institute for Space Research (INPE), and the Deforestation Alert System (SAD), managed by the Institute of Man and the Environment in the Amazon (IMAZON), an environmental organization operating in northern Brazil. The Cerrado data was from DETER only. The situation in the other ecosystems was calculated based on information from the Global Land Analysis & Discovery (GLAD) initiative at the University of Maryland, USA.

Because it is the first of its kind, the new report cannot be used to make comparisons with previous years or to infer trends. Other studies, however, indicate that deforestation in the Amazon has been rising over the last year, after having fallen between 2005 and the middle of the last decade. The INPE, which is officially responsible for monitoring deforestation rates in the Amazon and the Cerrado has not yet determined its final figure for 2019, but it estimates that deforestation reached 9,762 km² last year, an increase of almost 30% over 2018. The definitive deforestation rate is expected to be calculated and disclosed later this month (June). “The rise in deforestation seen last year will certainly continue,” comments Cláudio Almeida, a specialist in remote sensing and coordinator of the INPE Monitoring Program for the Amazon and Other Biomes. “Historically, the consolidated figure is an average of 4% above or below the preliminary estimate.”

The provisional Amazon deforestation estimate calculated by the INPE is greater than the rate announced by MapBiomas due to three major methodological differences: the federal institute and the NGO use different monitoring systems for their analyses, and they do not look at exactly the same geographic area or observation period. As well as DETER, the main function of which is to issue alerts on active deforestation hotspots to guide inspections by the Brazilian Institute of the Environment and Renewable Natural Resources (IBAMA), the INPE also runs the Legal Amazon Deforestation Monitoring Program (PRODES). Created in 1998, PRODES defines deforestation as the removal of all vegetation, known as clearcutting, in any area larger than 0.0625 km² (see Pesquisa FAPESP issue nº 283).

Official INPE data on the annual deforestation rate come from PRODES and refer to the Legal Amazon, an area defined for political and administrative purposes, that as well as the rainforest, includes a small region of the Cerrado. MapBiomas, however, uses data from DETER and bases its calculations geographically on the Amazon ecosystem, using the boundaries of this biome as defined by the Brazilian Institute of Geography and Statistics (IBGE). It also measures deforestation for each calendar year, from January to December, whereas the INPE uses PRODES records from August of one year to July of the next. The INPE’s 2019 deforestation rate is therefore based on information obtained between August 2018 and July 2019. 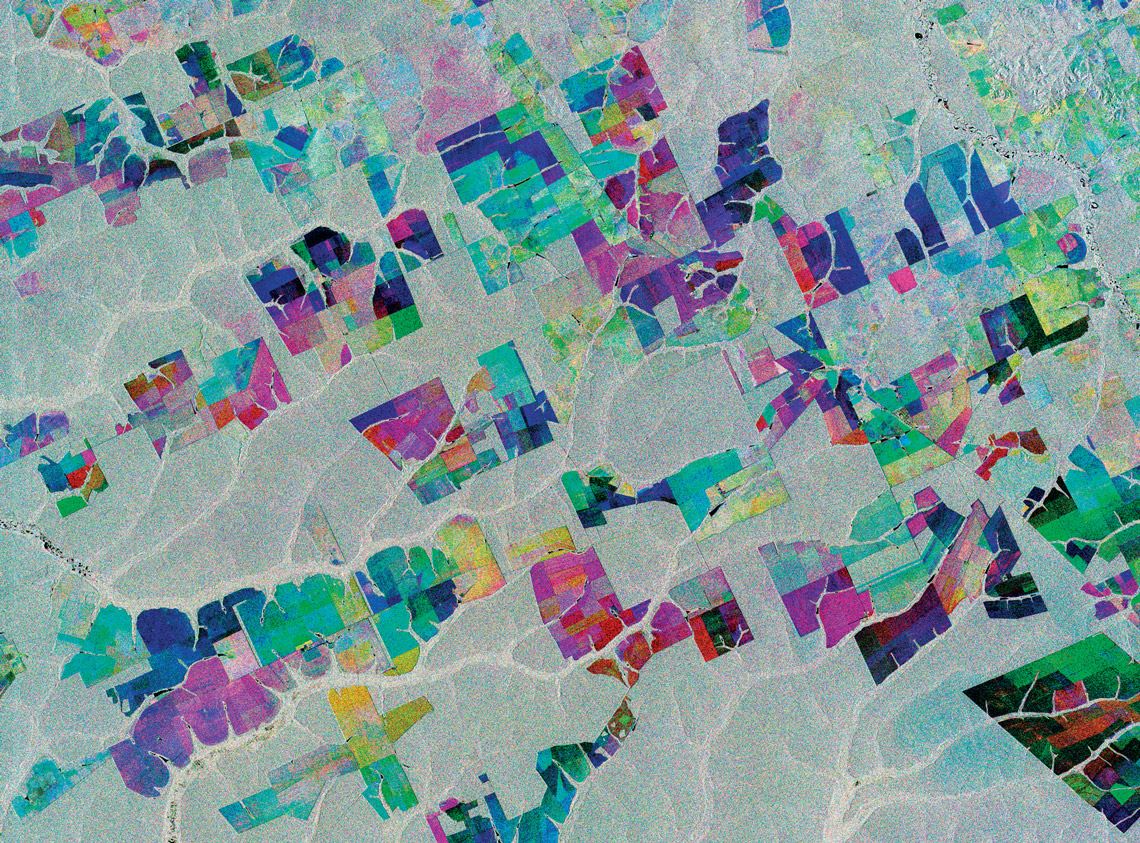 Overlaid radar images show deforestation in part of Mato Grosso: the blue areas were deforested in 2015, green in 2017, and red in 2019; the gray areas suffered no significant changeCopernicus Sentinel-1 / ESA

Short-term data indicate that the clearing of native vegetation in the northern Amazon is continuing at an accelerated rate, even since the COVID-19 pandemic hit the country. According to the most recent IMAZON bulletin, 1,073 km² were deforested in the Legal Amazon between January and April 2020, an increase of 133% over the same period in 2019. The data are from SAD, a system created by IMAZON in 2008 that uses images of Earth provided by Landsat (a NASA satellite program) and Sentinel, a European Space Agency (ESA) observation mission. The system is capable of detecting deforestation in areas as small as 0.01 km² (1 hectare). The same trend can be seen in the INPE data from DETER. In the first four months of 2020, it recorded the highest number of deforestation alerts in the Amazon in the last five years. From January to April this year, an area of 1,202.4 km² was cleared, 55% more than in the same period of 2019.

There is also cause for concern in other Brazilian biomes. Over a decade and a half, annual deforestation in the Cerrado, home to much of Brazil’s agricultural sector, was reduced to a quarter of its previous rate. But since 2016, it has stopped falling. The annual deforestation rate varies from 6,500 to 7,000 km², according to the PRODES system. In the Atlantic Forest, the biome that has historically suffered the most and where more than 70% of the Brazilian population lives, deforestation had been decreasing since 2016, but has now risen again. According to a survey published last month by SOS Mata Atlântica in partnership with the INPE, deforestation in the biome in 2018/2019 increased by 27.2% over the previous year—an estimated 145 km² was cleared. More than half of the deforestation occurred in two states: Minas Gerais and Bahia. In São Paulo, 0.43 km² of the biome was cleared, less than half of the area recorded in the previous year. “For the first time, two states managed to stop deforestation: Alagoas and Rio Grande do Norte,” says Marcia Hirota, executive director of SOS Mata Atlântica, in a press release.

As there are still no continuous deforestation monitoring programs in the other Brazilian biomes (the Caatinga, Pantanal, and Pampas), it is difficult to know precisely what is happening in these ecosystems. “Currently, we monitor the Amazon and the Cerrado. But by 2022, we plan to extend this service to other biomes,” says the INPE’s Cláudio Almeida.