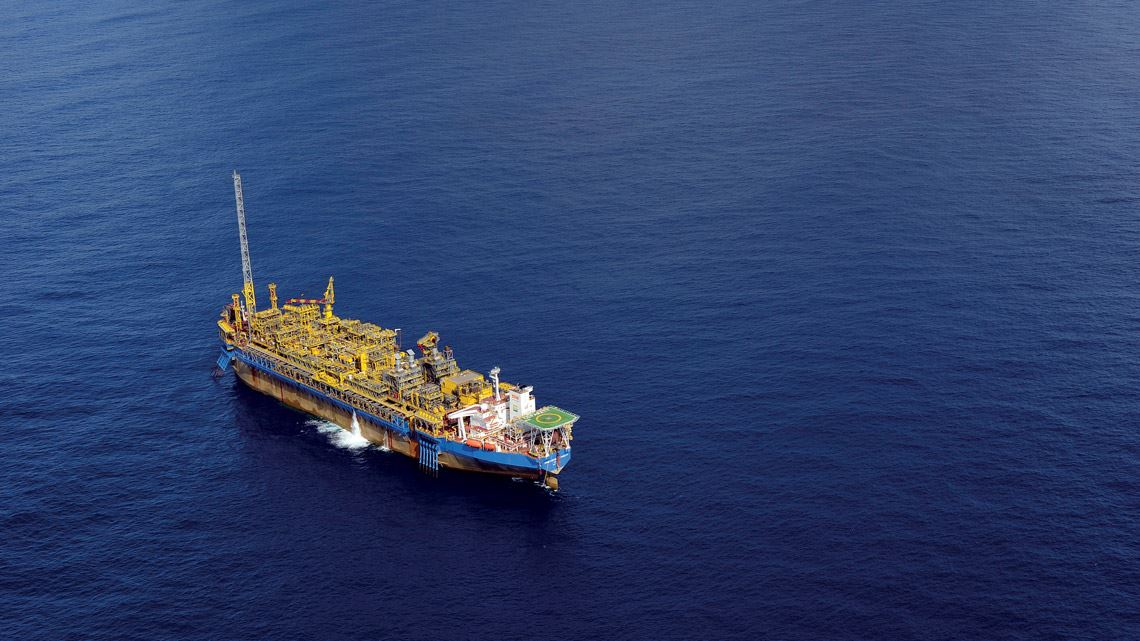 A system that would store the gases associated with offshore oil extraction in deep-sea caverns, and use gravity to separate carbon dioxide (CO2) from methane (CH4) has the potential to reduce the environmental impacts of pre-salt oil exploration and generate economic returns for the oil industry. Still in the design stage, the method was conceived by the Research Center for Gas Innovation (RCGI), based at the Polytechnic School of the University of São Paulo (Poli-USP), and funded by FAPESP and the Anglo-Dutch company Shell. At the end of 2019, the work was hailed for winning a Technological Innovation Award from the National Agency of Petroleum, Natural Gas, and Biofuels (ANP). The team responsible for the project hopes to prove the concept in practice, and plans to build an experimental cavern in Campo de Libra, in the Santos basin.

Carbon dioxide, the primary gas causing the greenhouse effect, is considered a waste product on an oil rig. The project’s goal is to store it properly, and prevent it from escaping into the atmosphere. Methane, on the other hand, is the highly valuable, basic component of natural gas, making up more than 90% of its composition. Natural gas is a source of energy for thermal power plants, which generate electricity. It is also used as a vehicle fuel and industrial raw material.

“We know that the C02, being heavier, will naturally settle to the bottom of the cavern, while the methane, which is lighter, will stay on top, making its recovery easier and cheaper,” states Julio Meneghini, professor at Poli-USP and scientific director of the RCGI, one of the Engineering Research Centers (CPE) supported by FAPESP. “The experimental cavern will help us to determine the time needed for the two gases, both in a supercritical state, to separate,” he explains.

The gases injected into the cave will be pressurized to equalize the enormous pressures at the depth of the salt layer, which is around three thousand meters below sea level where the cavern is to be built. The pressure in this environment exceeds 400 bar (5800 PSI), which is at least 400 times higher than atmospheric pressure, and the temperature is 40 degrees Celsius. “Under these conditions, the gas passes into its supercritical fluid state, one in which the distinction between liquid and gas disappears,” explains naval engineer Gustavo Assi, project coordinator at RCGI and a professor at the Poli-USP Naval and Oceanic Engineering Department. “A supercritical fluid has the density of the liquid, which guarantees great compaction and viscosity of the gas, allowing high fluidity.” The density of the supercritical fluid is 540 times greater than that of carbon dioxide at atmospheric pressure.

RCGI is also building a laboratory for the physical-chemical characterization of natural gas and oil in subcritical and supercritical conditions at the Poli-USP Department of Chemical Engineering. The unit will have equipment for measuring the physical properties of fluids in a supercritical state. The laboratory was scheduled to start operating in 2020, but the schedule is being revised to adjust to the limitations imposed due to novel coronavirus containment measures.

The RCGI researchers say initiating construction of the experimental cavern is only waiting on a decision from the petroleum operators who produce oil and gas in the Brazilian pre-salt region and need to store and separate CO2 and methane. Negotiations toward this end are already under way. The oil industry mastered the technology for creating salt caverns decades ago. They are formed by salt leaching, by pumping water through a pipeline into the salt layer. The injected water dissolves the salt and the resulting brine is removed through the outer well pipe, leaving a geomechanically stable structure. The pressure of the external salt rock is stabilized by the internal pressure of the new brine formed by the water being pumped in. Subsequently, the gas to be stored is injected, forcing out more brine (see infographic). 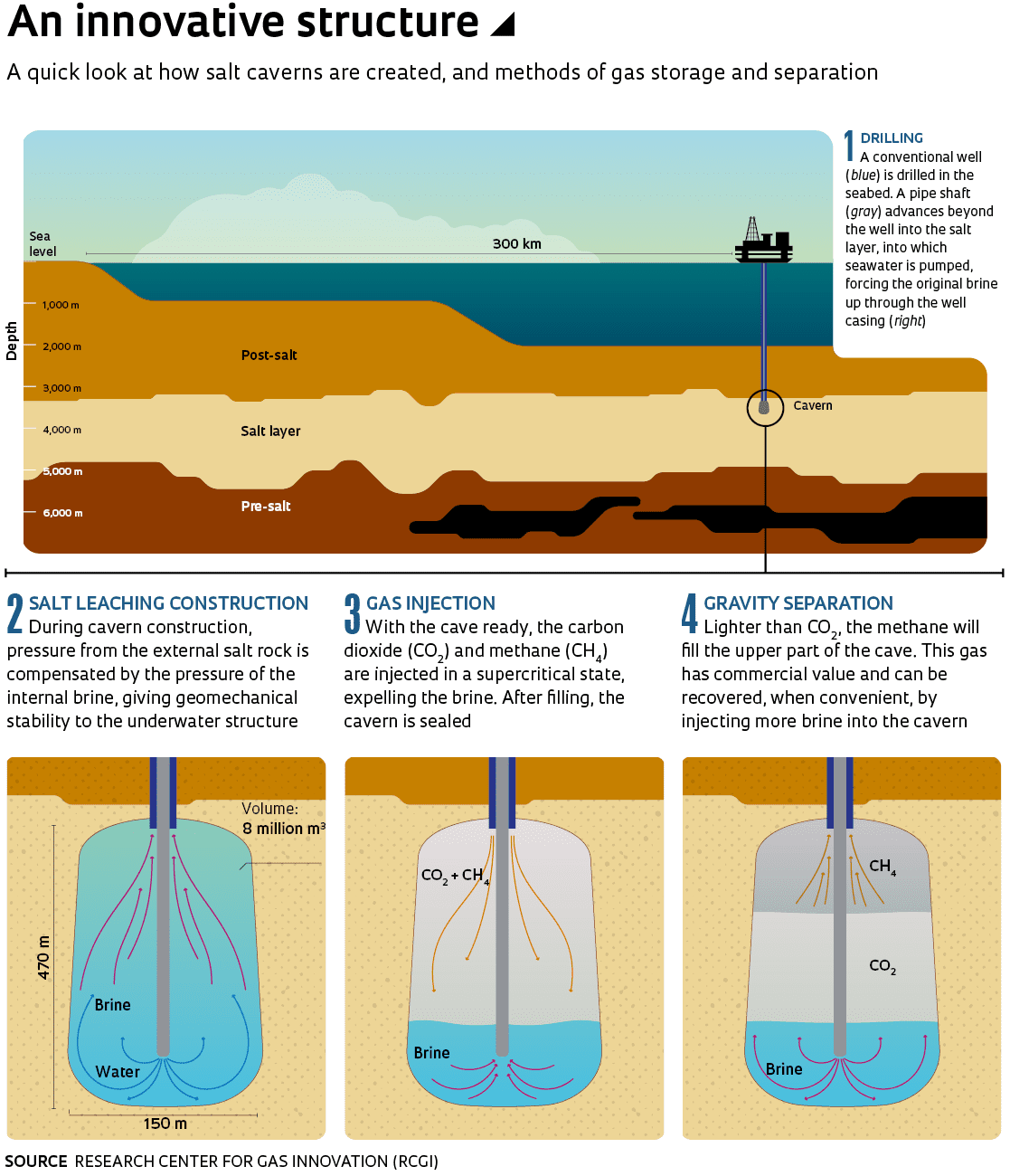 However, until now salt caverns have been small, being used mainly to maintain the CO2 in a permanently compressed gaseous state, and are built in underground areas on land, or under shallow ocean waters where the pressure is low. Rare in Brazil, they are more common in the oil fields of the Gulf of Mexico and in Europe.

In the system created by the RCGI team, the caverns would be built in the salt layer under ultra-deep marine waters—defined as depths more than 1,500 meters—in the vicinity of the pre-salt exploration fields. At these locations it’s possible to design large structures under high pressure, which is impractical in shallow waters where the salt rock layer is thinner and pressure isn’t high enough to make gas separation feasible.

With a structure 470 meters in height and 150 meters in diameter proposed by the RCGI researchers, it would be possible to store 8 million cubic meters of supercritical fluid, equivalent to one decade of associated gas taken from the depths by an oil platform.

Using gravity to separate the CO2 and CH4 in salt caverns, says Julio Meneghini, will bring economic gains to oil companies. Today the associated gas, when it is not reinjected into the oil wells it was removed from, is processed on the platforms. For this, a membrane system is used to separate carbon dioxide from methane and other marketable gases such as ethane (C2H6) and propane (C3H8), which are found in lower proportions. In this case, the methane and other gases are sent for processing on land and only the CO2 is reinjected into the well.

Gas separation by membranes, however, consumes a lot of energy and occupies a significant portion of the processing area on the FPSO (floating production storage and offloading) platform vessels, used for exploiting the Brazilian pre-salt. “Separating in the cavern will free up space on the platforms to expand oil processing. This would allow us to even consider building smaller and more economical platforms in the future,” Meneghini speculates.

Production transport
Separating and storing methane in caverns, says the RCGI’s scientific director, would also mean the gas could be recovered by oil companies when it becomes commercially advantageous. The companies would be able to control their supply according to the demand for natural gas. In Brazil, storage will also make it possible for companies to store the gas in place until the country has the appropriate infrastructure for transporting offshore production. Right now that infrastructure doesn’t exist.

There are currently only two methods for transporting natural gas produced offshore. One demands the construction of floating platforms so natural gas liquefaction can be done on the high seas and subsequently transported by methane tankers to the coast. Brazil does not have any marine gas liquefaction platforms. The second method is the construction of gas pipelines linking the offshore production fields to a Natural Gas Processing Unit on the coast. There are only two such gas pipelines in the country in interconnected operation, transporting natural gas from the Santos and Campos basins of the post-salt region to Caraguatatuba, São Paulo and Cabiúnas, in Rio de Janeiro. They have capacities, respectively, of 10 and 16 million cubic meters per day (Mm³/d). These are known as Route 1 and Route 2. The platforms exploiting the post-salt oil are approximately 50 to 80 kilometers from the coast.

A third gas pipeline, Route 3, is under construction to connect the Santos basin to Itaboraí, Rio de Janeiro, in order to supply the Rio de Janeiro Petrochemical Complex (COMPERJ), with a flow capacity of 18 Mm³/d. It had been scheduled to open in 2020, but has been postponed, with no new date yet announced. According to the ANP, the production of offshore natural gas in Brazil in March 2020 was 106.8 Mm³/d, of which 80.6 Mm³/d was from the pre-salt fields. The agency estimates that by 2030, 150 Mm³/d will be produced in the pre-salt region alone.

Currently almost half of the volume of pre-salt natural gas production, 48%, is reinjected into the oil wells. Around 40% is sent to market and 10% is used to generate the energy that supplies the platforms. The remaining 2% or 3% is burned in flares, the torches at the top of the platforms, impacting the atmosphere—and such combustion has no purpose other than to burn off gas.

Supply and demand
Luiz Costamilan, executive secretary for natural gas at the Brazilian Institute of Oil, Gas, and Biofuels (IBP), says that expanding the supply of energy depends on an increase in demand. One hope in this regard is the Novo Mercado de Gás Program, coordinated by the Ministry of Mines and Energy. The program looks to increase competition in the market by reducing Petrobras’s monopoly share of the natural gas processing and transportation system, and through ending the distribution monopoly exercised by state concessionaires.

Costamilan notes that expanding demand would not eliminate the reinjection of gas into oil wells. It would still be necessary, since the reinjected gas is used to maintain the reservoir pressure and increase oil extraction capacity. “With adequate operation, using gas reinjection or water injection, it is possible to remove 50% of the oil from an oil well. Without reinjection, between 70% and 80% of the oil would remain inaccessible,” says Costamilan.

According to information from the ANP, the use of gas reinjection in the oil reservoirs is growing, and will tend to continue increasing over the coming years due to the lack of adequate infrastructure for offshore transportation and distribution to consumer markets. For Meneghini, despite the importance of reinjection to increase oil production, an excess of reinjected gas, as happens on some platforms today, can reduce productivity in the medium and long term. As the removal of oil and gas reinjection continues, over time the percentage of associated gas removed in conjunction with the oil from the reservoir increases. This increased percentage may exceed the capacity of the oil-and-gas processing platform, eventually causing production to be interrupted. “Ideally, the gas is reinjected in a calculated way, based on its ability to generate more oil, and not out of necessity as is often the case now. Cavern storage would allow oil companies to achieve this balance,” he says.