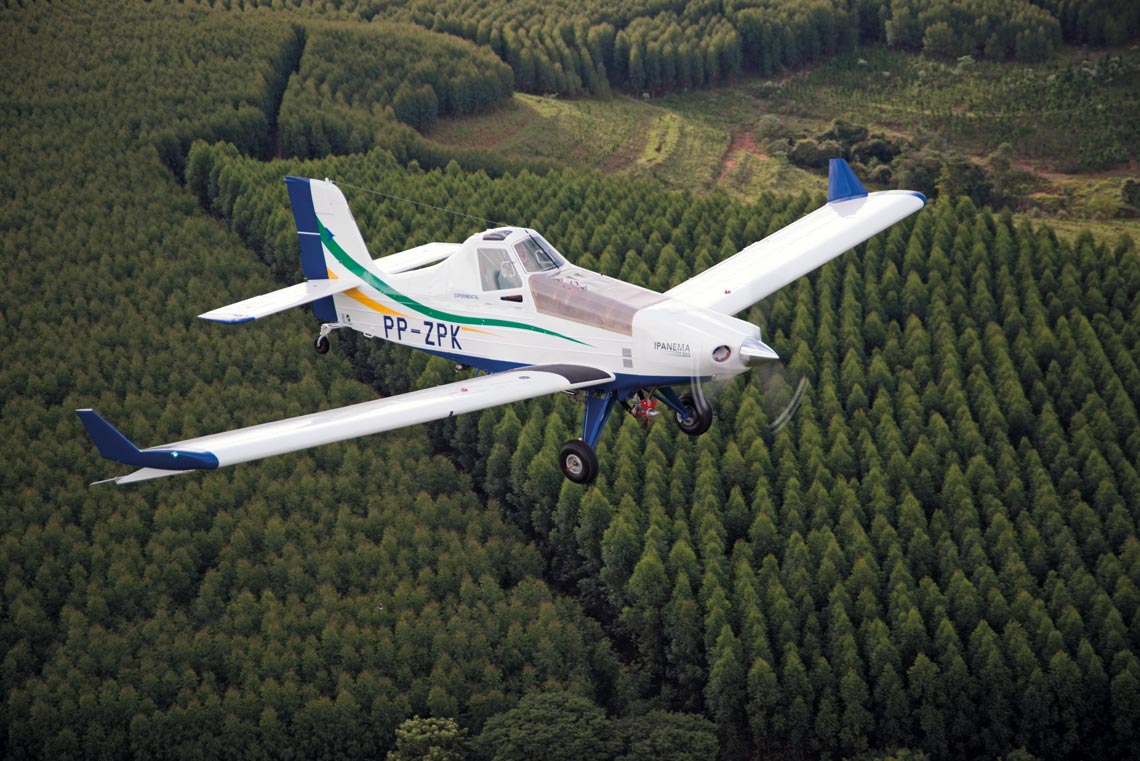 The program will be based on Embraer’s agricultural aviation platform, Ipanema

Tomorrow’s aircraft will be more eco-efficient; they will burn less fossil fuels, release less carbon dioxide (CO2) into the atmosphere, and fly more silently—all thanks to electric propulsion, a new direction taken by the world’s leading aircraft manufacturers, including US-based Boeing and European rival Airbus. In late May, Brazilian planemaker Embraer officially joined the race with its announcement of a partnership with Brazilian motor manufacturer WEG.

The agreement is currently for early-stage scientific and technological cooperation. In the long term, the collaboration will progress to development, laboratory testing, and flight testing of electrified propulsion systems. WEG will supply powertrains—motors combined with variable frequency drives—for the aircraft, with the batteries sourced elsewhere. Batteries remain an obstacle to electrified flight with their currently low energy density (the ratio of weight to battery capacity), which means a prohibitively large number of batteries is required for flight.

WEG Automation Director Manfred Peter Johann says the company already supplies powertrain systems for ships, trains, buses, and trucks and will now need to adapt them for aircraft. “Our research will tell us what challenges there are to address,” he says. Laboratory testing is expected to begin within 2019 and flight testing in 2020.

The prototype will be based on Embraer’s single-engine agricultural aircraft platform, the EMB-203 Ipanema. Engineer André Gasparotti, Embraer’s head of research and development, says the aircraft will be a technology demonstrator with no commercial applications in the foreseeable future. The prototype will be fully electric and will be capable of approximately 30 minutes of flight time. The partnership could eventually evolve into hybrid fuel-electric propulsion—combining electric motors with turbine engines—and into larger aircraft. Gasparotti believes electrification will also drive innovation in broader aircraft design to make airplanes more efficient. “Innovation has so far been incremental but may soon turn disruptive.”

One possibility being considered is distributed propulsion. Modern aircraft typically have engines mounted beneath their wings—or in the nose in the case of single-engine aircraft. These propulsors are large and relatively heavy and require a robust airframe to match. Distributed propulsion utilizes multiple small- or medium-sized electric motors fitted at different points on the wings or elsewhere on the aircraft. The distributed engine weight creates new aerodynamic possibilities, such as smaller, slimmer and more flexible wings. Some motors could only be used during take-off and landing.

Other promising research fronts are the increasing use of electric actuation in the replacement of hydraulics for some functions and the use of motorized undercarriages for taxiing. One of the advantages of these technologies is that they enable lighter-weight subsystems and therefore fuel savings.

Economist Marcos José Barbieri Ferreira, head of the Laboratory for Aerospace and Defense Research at the University of Campinas (LabA&D-UNICAMP), says electrification is currently one of the most disruptive technologies in the industry and believes the Embraer-WEG partnership could usher Brazil into a new and exciting market. “WEG could get a foothold in a demanding market for aircraft motors, with little in the way of competition,” he says. “And Embraer would have the opportunity to reposition in the global niche market for small- to medium-sized aircraft by incorporating innovative technology.”

The International Civil Aviation Organization (ICAO) estimates that air transport is responsible for 2% of global CO2 emissions, a percentage that is likely to rise—airlines carried 4.3 billion passengers in 2018, and this figure is poised to double over the next 15–20 years. Airplanes are one of the most carbon-intensive modes of travel, releasing 285 grams (g) of CO2 per kilometer traveled by a passenger; in comparison, cars emit 158 g and trains emit just 14 g.

In 2016, ICAO created a carbon offsetting mechanism that aims to stabilize CO2 emissions at the levels in 2020. The International Air Transport Association (IATA) adopted its own greenhouse gas reduction commitments several years prior, in 2008. Since then, improvements to engine and aerodynamic performance and the use of lighter materials in new generations of aircraft have delivered energy-efficiency gains of between 15% and 25%.

Experts at ICAO say that a step change in emissions reduction will only be achieved when fossil fuels are replaced entirely, or at least partially. However, electrification will only become commercially feasible in the 2040s, according to the organization. Replacing jet fuel with electric power, explains Gasparotti, can improve energy efficiency by 40% to 50%. 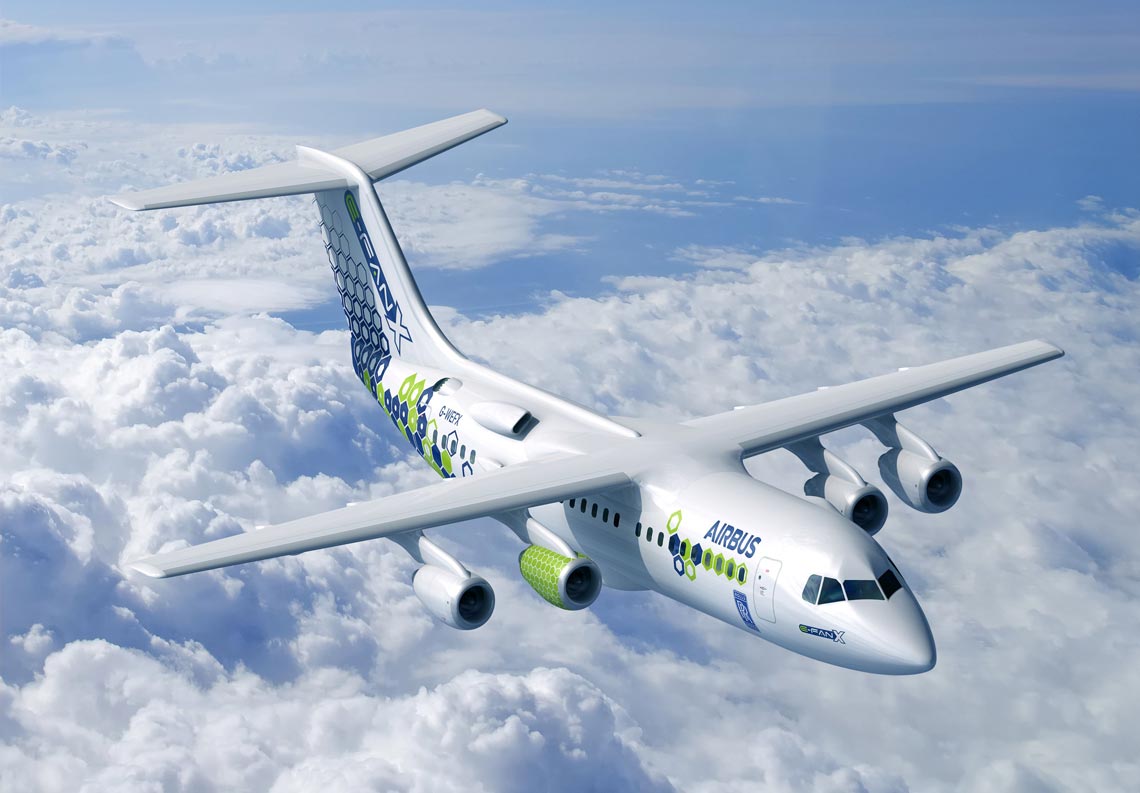 An illustration of the hybrid-electric aircraft E-Fan X, which Airbus plans to launch by 2035Airbus

There are currently around 100 electric aircraft programs under development globally. Boeing has put several years of development so far into SUGAR Volt, a hybrid fossil fuel-electric propulsion system. The company hopes to launch the first jets with the technology between 2030 and 2050. Airbus plans to conduct the first flight tests of its E-Fan X—a hybrid-electric aircraft demonstrator developed in collaboration with Rolls-Royce and Siemens—sometime next year. E-Fan X will be powered by three turbines and an electric motor. Hybrid jets are expected to be on the market by 2035.

In Latin America, the first electric aircraft to take the skies was the Sora-e, in its maiden flight in 2015. The twin-motor, two-seat airplane was developed by ACS-Aviation in São José dos Campos, southeastern Brazil, in partnership with Itaipu Binacional. After the flight trials, development was put on hold, says ACS-Aviation CEO Alexandre Zaramella. The company decided to prioritize another project, an electric, semiautonomous vertical take-off and landing vehicle.