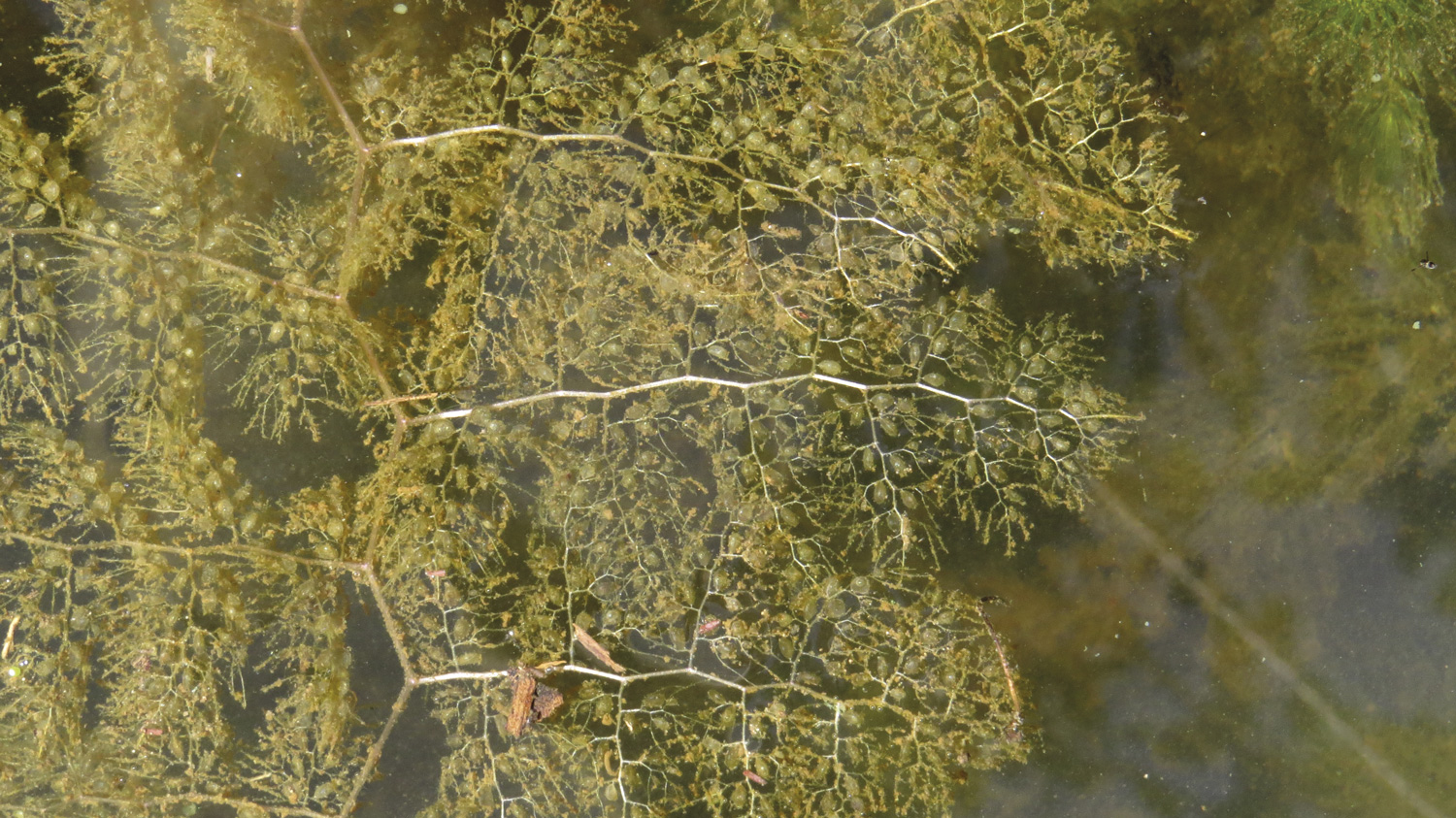 Connected to filaments, Utricularia foliosa’s traps are bladders that suck in underwater prey

With their delicate beauty, carnivorous plants in the genus Utricularia are surprising for their diversity of colors, shapes, sizes (ranging from centimeters to meters), and habitats. While some live in moist soil in sunny areas, others grow in rivers and lakes. They can attach to stones on the banks of waterfalls or live inside bromeliads. The 240 species in this genus, which today are scattered throughout the world, all share the same origins. A study by researchers at São Paulo State University (UNESP) published in this month’s edition of Molecular Phylogenetics and Evolution indicates that these plants first occurred in present-day Brazil.

The article is part of biologist Saura Rodrigues da Silva’s master’s coursework, done under the guidance of biologist Vitor Miranda at UNESP in Jaboticabal, São Paulo. The study included collaboration by specialists from other countries and is the largest phylogenetic study on Utricularia. “By analyzing DNA sequences we were able to identify specific markers, through which we determine ancestral lineages and infer the evolutionary history of the genus,” explains Silva.

A general rule of evolution is that the most closely related species have fewer genetic differences between them. Based on this premise, it was possible to use two reference points to estimate the time of divergence between the current species and their ancestors. “We started with a grain of pollen identified in the northern hemisphere, which had already been registered in the literature and dates back to 11 million years ago. Another reference for the phylogenetic tree was the Isla de la Juventud in Cuba. Geological studies indicate that this island emerged between 5 million and 2 million years ago, and that this event is associated with the appearance of a carnivorous subspecies of the genus Pinguicula,” explains Miranda, who used this information to fit together the puzzle of how Utricularia colonized the world.

U. foliosa has flowers that attract but do not capture pollinatorsPlant Systematics Laboratory Team/UNESP

The study has transformed an old hypothesis into a widely accepted scenario about the evolution of Utricularia: the genus emerged in South America around 39 million years ago. The most likely site of origin on the continent is Brazil, the country with the largest number of species: approximately 70 of the 95 found in South America, 20 of which are endemic. “The biogeographic research indicates that the site of origin may coincide with the one that has the most diversity,” stresses Silva. From Brazil, it spread to the entire world (see map). Today, this genus is one of the most widely distributed and accounts for roughly 35% of all the carnivorous plants that exist.

Miranda believes that the plants were dispersed over long distances by migratory birds that paddled in lakes inhabited by carnivorous plants. “At shorter distances, dispersion by wind and rainwater is facilitated by the morphology of the seeds, which are small as grains of dust, some only two tenths of a millimeter,” he adds.

Experts in adaptation
The results also suggest that ancient ancestors of these plants lived on land. “According to our phylogenetic hypotheses, evolutionary changes may have occurred more than once within the genus,” says Miranda. Aquatic colonization would have been an adaptation to nutrient-poor areas. Where resources are scarce, the ability to capture prey in the water can offer a major advantage for survival.

The biologist explains that carnivorous plants use their leaves for photosynthesis, like most plants, but complement this nutrition with nitrogen and phosphorus they obtain from their prey—usually small insects, larvae, protozoa, and microcrustaceans, in the case of Utricularia, while larger carnivorous plants may consume arthropods and even small vertebrates.

The adaptation to unfavorable environments gave rise to a varied arsenal of traps during the evolution of these plants. While Utricularia have small pockets they suck their prey into, other genera in the same family (Lentibulariaceae) developed leaves with glands that secrete a sticky glue-like substance to catch prey, or even spiral leaves that form a tube which directs prey to the part of the plant that digests them.

“The drosophila of botanists”
Phylogenetic analysis of the genus Utricularia began with the advances made by the researchers at UNESP Jaboticabal in the field of genomics. Vitor Miranda participated in an extensive collaboration with the bioinformatician Alessandro de Mello Varani of the same institution. In July 2017, they published the first mitochondrial genome of a Brazilian plant in PLOS ONE, a carnivorous plant living on land, which is both native and endemic to the country: Utricularia reniformis.

U. simulans is common in fields with sandy soilPlant Systematics Laboratory Team/UNESP

“We decided to start with smaller steps; the nucleus is larger and has more DNA,” explains Varani. Before mitochondria, in 2016 they sequenced and published in the same journal the genome of the chloroplast, the organelle responsible for photosynthesis. The complete genome of the plant encompasses these two structures as well as the nucleus, which has already been sequenced and is currently being finalized.

The researchers maintain that complete sequencing of the Brazilian Utricularia reniformis could transform it into another option for genetic studies, along with Arabidopsis thaliana, an herbaceous plant in the Brassicaceae family (which includes mustard and cabbage). Arabidopsis has a small genome and was the first plant to have its DNA mapped; it became a model in botany, like the fruit fly (Drosophila melanogaster) in zoology.

“The Utricularia genome varies greatly in size, and can be four times smaller or larger than Arabidopsis,” says Miranda. “Now we are investigating the causes of this expansion and contraction of the genome.” One possibility for this contraction is the high production of reactive oxygen species or free radicals derived from the mitochondrial metabolism in carnivorous plants in this genus. “The reactive species can cause DNA breakage, which may explain the high rates of mutation, and consequently the diversity of forms found in Utricularia,” explains Silva. One of the hypotheses for expansion may be related to the duplication of portions of DNA.

The chloroplast and mitochondria sequencing also produced some surprises. In U. reniformis, several genes related to photosynthesis were not found in the chloroplasts, which are the organelles responsible for producing sugars from sunlight and the carbon dioxide present in the air. These genes were inactive and had been transferred to the plant’s mitochondria. “The reason has yet to be clearly explained, but could be related to the plant’s carnivorous adaptation,” suggests Varani.

“We are still in the field of basic science, attempting to understand the evolution of this species,” he says. “We want to know what determined such versatility, allowing species of the same genus to have aquatic or terrestrial habits.” Besides the general scientific interest it has stirred, Varani believes that the genetic mapping of Utricularia may lead to biotechnological applications for other types of plants. “For example, it may be possible to provide commercially valuable species with greater resistance to water.”

Specialists in carnivorous plants have already discovered many ways in which these species attract their prey: some use the color of their flowers, others use odor, shape, or even the light reflected by sticky droplets secreted by the leaves. It’s still not clear how they attract the researchers themselves, a group that is passionate and faithful to their object of study.

In the nineteenth century, the English naturalist Charles Darwin (1809–1882) was enchanted by these plants, particularly the genus Dionaea (Venus flytrap), which he considered one of the “most wonderful in the world.” They were featured in his book Insectivorous Plants, which was published in 1875. To this day, the image of leaves snapping shut over an insect in a fast and deadly trap is what most people think of when it comes to carnivorous plants.

Miranda is one of the heirs of this sense of enchantment. He was 14 years old when he began to collect carnivorous plants and correspond (by mail, before the internet) with plant ecologist Lubomír Adamec of the Institute of Botany at the Czech Academy of Sciences, a worldwide reference on carnivorous plants. Adamec later became Miranda’s colleague, and one of the authors of the article published in Molecular Phylogenetics and Evolution.

On the internet, various groups comprised of admirers of these plants publish photos of their findings on social networks. This is how the biologists Paulo Gonella and Fernando Rivadavia identified a new species of carnivorous plant in 2012: looking at pictures posted on Facebook by an orchid-loving friend who was hiking in the mountains of Governador Valadares, in Minas Gerais, Brazil. At that time, Gonella was completing his doctorate at the Institute of Biosciences of the University of São Paulo, studying the genus Drosera.

An expedition to the site confirmed the discovery, which was described in 2015 in the specialized journal Phytotaxa. The new species was baptized Drosera magnifica by the biologists because of its size. It reaches more than 1.5 meter in length, and is the largest of its kind in the Americas. “It is also flashy and beautiful, it’s truly magnificent,” says Gonella.

The plant is known as a sundew because of the bright-red glistening, sticky droplets that cover the long, thin leaves. This appearance attracts its prey, small flying insects that get stuck in the droplets and are digested by enzymes secreted by the plant.

Drosera magnifica figures prominently in the first chapter of Gonella’s doctoral thesis, but runs the risk of disappearing from the mountains of Minas Gerais. The only place where it was found, Serra do Padre Ângelo, is a mountain surrounded by farms and has already been heavily deforested. According to the researcher, the plant is on the list of critically endangered species, but there are initiatives to transform the area into an environmental conservation unit.