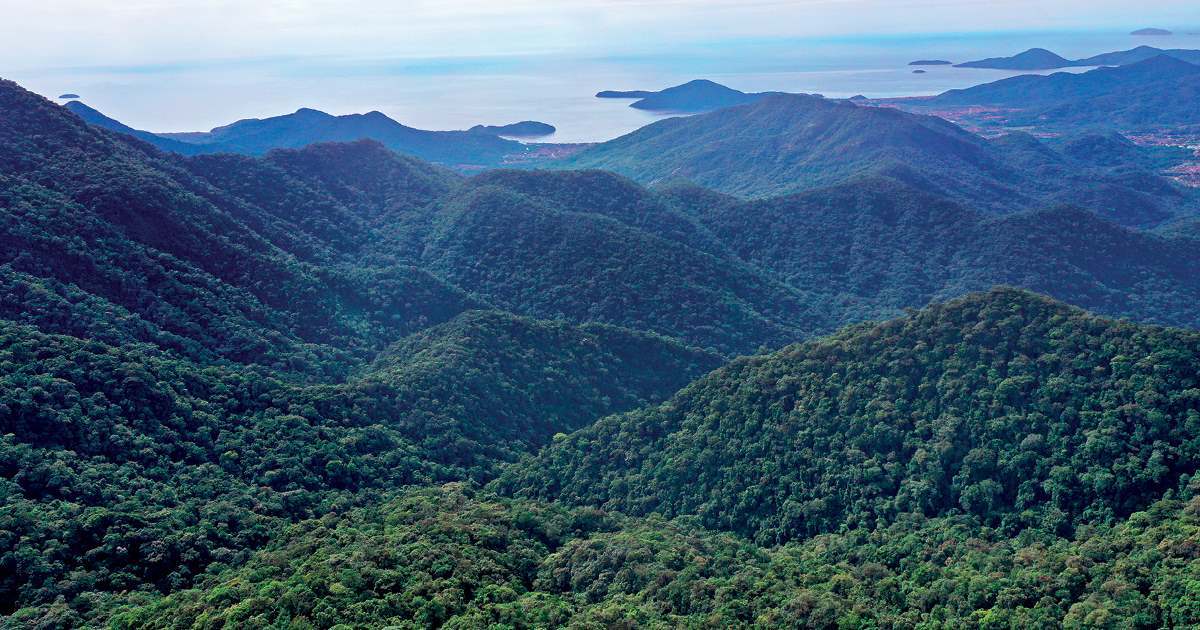 Computational models reproduced the emergence of two major mountain ranges in southeastern Brazil. According to a study by researchers from the Institute of Astronomy, Geophysics, and Atmospheric Sciences (IAG) at the University of São Paulo (USP), the Serra do Mar and Mantiqueira mountains emerged as a result of local processes, a combination of the characteristics of Earth’s physical structure and erosion that has occurred over tens of millions of years. The Continental Rift of Southeast Brazil (CRSB), an elongated depression delimited by geological faults, was established around 60 million years ago, resulting in the formation of several sedimentary basins, including the Taubaté and São Paulo basins. Their formation separated two large escarpments: the Serra do Mar near the coast, and the Mantiqueira mountains in the interior of the continent, which are more or less parallel. The process was described in detail in an article published in the scientific journal Tectonics in January this year.

The formation of the two mountain ranges was emulated using a computer program called Mandyoc, developed by geophysicists Victor Sacek from IAG and Rafael Monteiro da Silva, a PhD student advised by Sacek, who were also the authors of the article. Prior to the pair’s work, geological studies attempting to explain the formation of the RCSB have never described any physical processes that validate their hypotheses. “Our work used computer software to simulate the formation of Brazil’s southeastern coastline since the separation of South America and Africa,” explains Silva. Using this approach, the researchers found evidence that tectonic movements originating within the region would have been enough to create a fault—a rupture in the earth’s crust—and provoke the emergence of the RCSB. “The origins of this rift are local. The tectonic movements of the Andes, for example, which occurred thousands of kilometers away, are not required to explain it,” says the geophysicist.

The results of the study are based on numerical modeling and the observation of three geological characteristics of Brazil’s southeast coastline: the degree of coupling between the crust (Earth’s thin, solid, outermost layer) and the mantle (the thick, viscous layer located immediately below the crust); the magnitude and extent of coastal erosion; and the preexistence of zones of weakness in the continental crust. To perform hundreds of simulations—each taking between three days and a week, depending on the number of simultaneous equations—the group, which received funding from FAPESP, paid for processing power on the Google Cloud Platform. “There were several tens of thousands of hours of numerical simulation running on dozens of computer cores at the same time,” explains Sacek.

The starting point for calculating the interaction between these three factors on a geological time scale, to the order of tens of millions of years, was the separation of the African and South American continents, which began around 140–130 million years ago. This simulated journey through time suggested the presence of a lower crust with relatively low viscosity, a characteristic that would have facilitated decoupling of the upper crust and contributed to the emergence of geological faults. “To illustrate the interaction between the top and bottom of the crust, we usually use the image of a peanutbutter sandwich. If the filling is less viscous, there is greater mobility and less attachment between the two ‘slices of bread.’ Geologically speaking, this scenario increases the likelihood of faults and regions that are more susceptible to deformations,” says Sacek.

The USP geophysicist’s group first tried to use programs developed abroad to simulate the formation of the RCSB, but they could not find any existing software with the features they needed. One of the requirements was that it had to have tools capable of solving the equations that govern the physical behavior of rocks in geological time. The only alternative was to develop their own program, Mandyoc, which is short for Mantle Dynamics Simulator Code. “The big challenge for the software was to be able to jointly simulate two processes: the earth’s internal dynamics, on a scale hundreds of kilometers deep, and the occurrence of erosion and sedimentation, phenomena that affect the crust,” says Silva.

“The program is a mathematically robust tool, which can be used to numerically test different hypotheses,” says Claudio Riccomini, a geologist from USP’s Institute of Geosciences (IG) who did not participate in Sacek and Silva’s research. Jamison Assunção, a PhD student at IAG, and Agustina Pesce, a geophysicist from the National University of San Juan in Argentina, also helped create Mandyoc.

The article authors now intend to use the software to model the deformation of the rift in a more specific period of time: the last 36 million years. “This set of events is relevant to oil prospecting, for example, since it is likely to have reached the marine regions adjacent to the southeast coast of Brazil, in the Santos and Campos basins,” explains Riccomini. Mandyoc is an open-source program and is available to download for free from the Github collaborative platform. Later this year, the IAG geophysicists plan to publish a scientific paper with a complete description of the program’s functionalities.