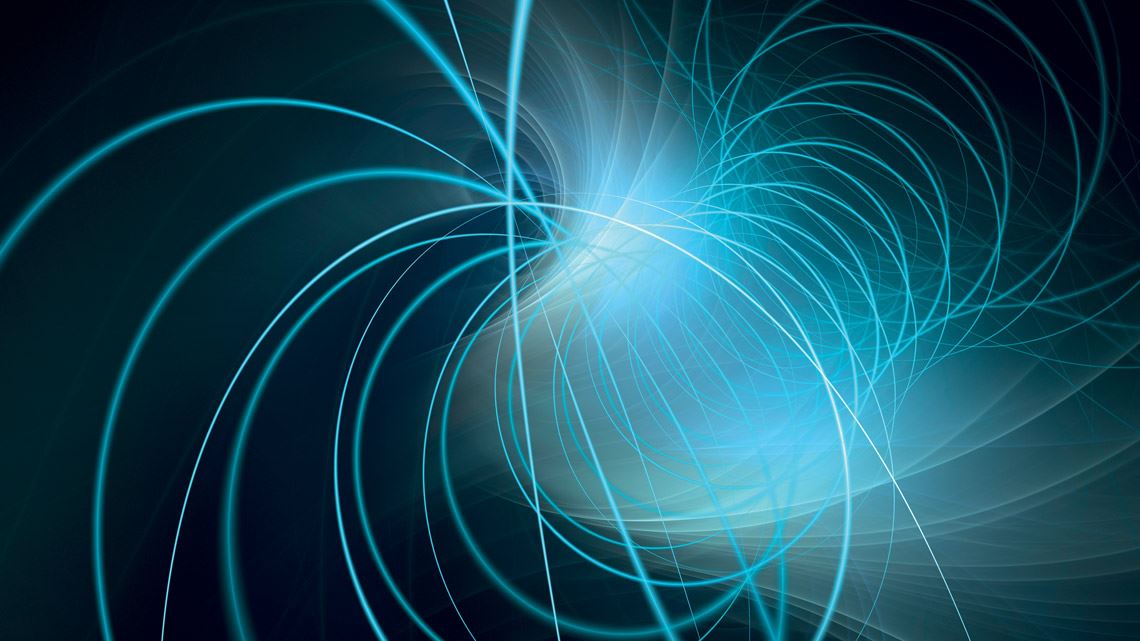 Artist's representation of the Universe formed by filaments, as proposed by string theory

To account for the representation of gravity in quantum mechanics—an atomic and subatomic scale—the field equations of general relativity need to be modified by correction factors. The first and key numerical amendment is a parameter called alpha (α), the exact value of which has not yet been determined. One of the purposes of alpha is to influence the interaction between gravitons (hypothetical quantum particles with no mass), which theoretically carry gravitational force and transmit it to other particles.

An article by three theoretical physicists has now calculated the minimum value alpha would have to be for the theory of relativity proposed by Albert Einstein (1879–1955) to be able to describe gravitational interactions in the microscopic universe of particle physics. According to the paper, published in the scientific journal Physical Review Letters (PRL) in August 2021, alpha would have to be equal to or greater than 0.14. The result reached by the researchers was almost equal to the lowest known value of alpha, which was identified by defenders of string theory in the 1990s: 0.1389.

Obtaining a numerical expression for this correction factor is an essential step towards the formulation of quantum gravity—like an embryo of the theory of everything, capable of unifying the ideas of general relativity and quantum mechanics. Until now, the only mathematical model to successfully attempt to calculate a minimum value for alpha was string theory.

According to the theory, instead of being point objects, the elementary particles of matter are one-dimensional microscopic filaments (strings) that vibrate across 10 dimensions of space-time. “We were surprised with the result of our work. It may or may not have been a coincidence,” says Portuguese scientist Pedro Vieira, one of the authors of the article, whose research is partially funded by FAPESP’s São Paulo Excellence Chair (SPEC) program. “It’s still too soon to say that string theory is right or that it’s the only possible way of uniting general relativity and quantum mechanics. In addition to alpha, there are other correction factors that need to be calculated, such as beta and gamma.”

Vieira divides his working time between teaching and research at the Perimeter Institute in Canada and at the International Center for Theoretical Physics (ICTP) of the South American Institute for Fundamental Research (SAIFR), which operates from the Institute for Theoretical Physics (IFT) at São Paulo State University (UNESP). Andrea Guerrieri, an Italian physicist from Tel Aviv University, Israel, and João Penedones, a Portuguese physicist from the Swiss Federal Institute of Technology Lausanne (EPFL), Switzerland, also contributed to the PRL article.

The three scientists used a new approach to calculate the minimum value of the primary correction factor for relativity equations, making use of a mathematical method called the S-matrix bootstrap, which they previously used to study the properties of pions (a class of very light subatomic particles), described in another article they published in 2021. “The bootstrap technique began being used in the 1960s, when it became popular in quantum physics, but later lost ground to other approaches,” explains Guerrieri, who did a three-year postdoctorate at ICTP, SAIFR, between 2017 and 2020.

The method is based on general principles or postulates—such as causality, Lorentz invariance (the laws of physics are the same regardless of the location of the observer), and the fact that a probability cannot be greater than 1—to calculate certain properties arising from interactions between subatomic particles in the quantum world. In this instance, it was used to predict the lowest possible value of the alpha correction factor. Because the S-matrix bootstrap method demands such a high computational capacity to perform a series of operations, Vieira, Guerrieri, and Penedones had to adopt a simplified model of reality in their research, based on a dominant version of string theory.

In the world idealized by this theory, there are 10 dimensions of time and space (six more than currently known) and the manifestation of a property called supersymmetry. According to this property, every particle in the Standard Model of Particle Physics—the dominant theory that has explained the interactions between known forces other than gravity and the constituents of matter for the last half a century—must be accompanied by another particle, called a superpartner. “In future studies, we will try to calculate alpha in environments with fewer dimensions,” says Vieira.

Not everyone has interpreted the newly calculated minimum possible value for the alpha correction factor as a new impetus for string theory, which for now, lacks experimental evidence. “All the observational data indicate that the Universe has four dimensions, with no supersymmetry,” says André Landulfo, a physicist from the Center for Natural and Human Sciences (CCNH) at the Federal University of ABC (UFABC) who was not involved in the study. “To me, the scope of this study doesn’t seem broad enough to be used in theories of quantum gravity based on physical reality. It is thus difficult to use the results as support for string theory as a viable alternative, let alone the only viable alternative, in formulating a theory of quantum gravity.”

Scientific article
GUERRIERI, A. et al. Where is string theory in the space of scattering amplitudes? Physical Review Letters. Vol. 127, no. 8. Aug. 20, 2021.