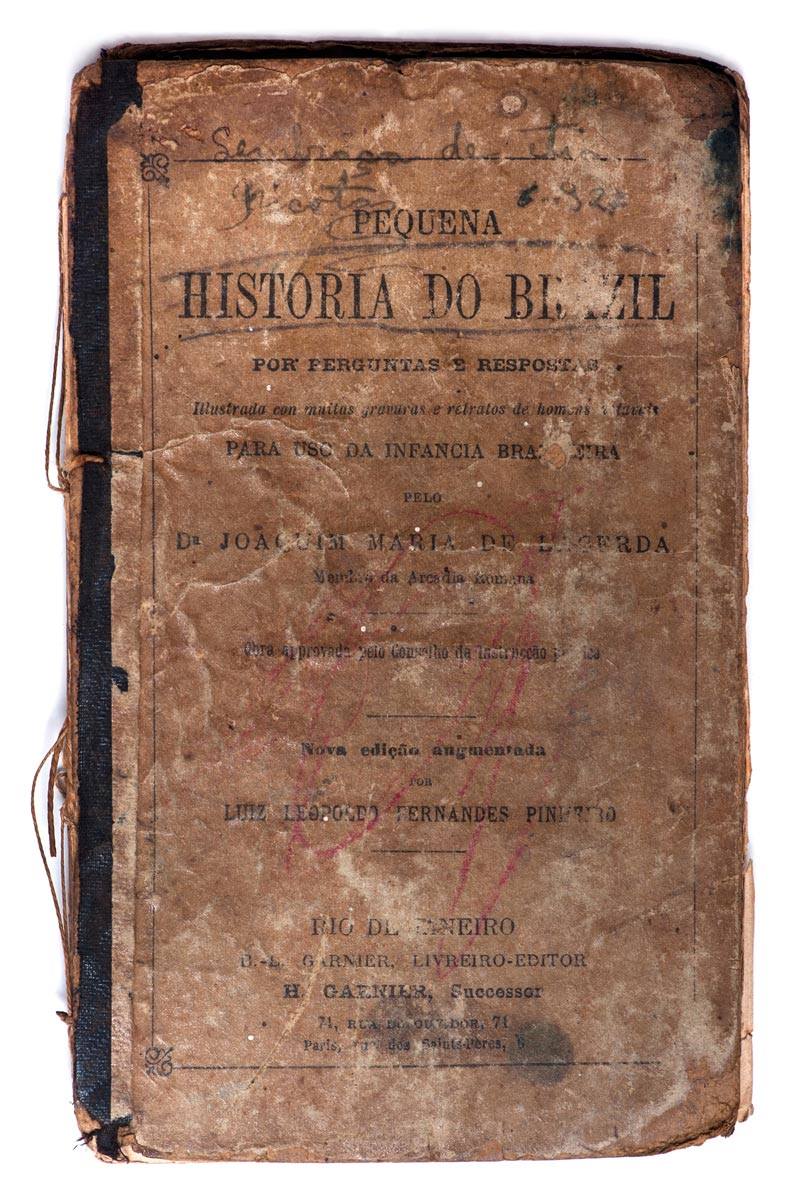 A survey started for personal use eight years ago by historians João Paulo Pimenta and César Augusto Atti is to become the Independence Bibliography. The open-access database contains approximately 15,000 references related to the Independence of Brazil, which took place in 1822, and the era in general. The aim is for the catalog to be available to the public in the second half of this year. “We basically did what a history student does when they start researching a certain topic and collecting a bibliography about it, but on a large scale,” explains Pimenta, a professor from the History Department of the School of Philosophy, Languages and Literature, and Human Sciences (FFLCH) at the University of São Paulo (USP).

The survey includes references to books, articles in the media and academic journals, theses, and dissertations, as well as encyclopedia and dictionary entries. All were published between 1832 and 2021, mostly in Brazil and in Portuguese, but there are also texts in English, Spanish, French, Italian, German, Russian, and Swedish. “We considered the period from the Independence of 1808, when the royal family arrived in Brazil, to 1831, when Emperor Pedro I [1798–1834] abdicated the throne,” explains the historian. “We chose to work with material that was written after that period, with a certain historical perspective rather than in the heat of the moment. Questions about the process become clearer throughout the nineteenth century.”

Pimenta and Atti, an independent researcher, spent six years gathering 12,000 references by studying footnotes and bibliographies in books, journals, and academic papers. “We also searched catalogs from public and private libraries in Brazil and abroad, as well as résumés of researchers who have dedicated themselves to the subject,” explains Pimenta. The references were compiled in a list on the computers of the two researchers, who study the history of Brazil between the eighteenth and twentieth centuries.

Gradually, other scholars in the field took an interest. “Many colleagues started asking us for help regarding literature about the period and started using our bibliography,” recalls Pimenta. One was Andréa Slemian, a historian from the School of Philosophy, Languages and Literature, and Human Sciences (EFLCH) at the Federal University of São Paulo (UNIFESP). About two years ago, she suggested making the material publicly available. Since then, she has helped coordinate the database project with Pimenta, whose team includes five undergraduate and graduate history students from USP, UNIFESP, and the Federal University of Maranhão (UFMA). All are involved on a voluntary basis.

In the first stage of the investigation, the team of researchers expanded the list, which now contains approximately 15,000 references. About a year ago, they began assembling the database, which they plan to offer access to via a website that they are also developing. “We use spatial and thematic descriptors to classify the subjects dealt with in the texts. Each reference is assigned one of these two descriptors, but they can have more than one spatial or thematic descriptor,” explains Slemian. “Among the spatial descriptors are states and regions of Brazil. We created a set of at least 42 themes, such as body and sexuality or wars and revolutions. This makes it easier for researchers to find the type of material they are looking for, using keywords.”

When starting his studies, José Murilo de Carvalho, a retired professor of history at the Federal University of Rio de Janeiro (UFRJ), faced a different situation. In the 1960s, Carvalho did a double degree at the Federal University of Minas Gerais (UFMG) in Belo Horizonte, the city where he lived at the time. “Everything was more difficult, data on existing literature was more scarce, access more difficult,” he recalls. “I had graduated in sociology and politics but then fell in love with history, which requires a lot of archival research. For a while I had no choice but to live in Rio de Janeiro, where the main archives and libraries were located. The most important were the National Archives, the National Library, the Brazilian Historic and Geographic Institute, and the library of the Finance Ministry. Nowadays, everything is easier thanks to digitization, especially the National Library’s collection.”

References are classified as one of two types of descriptors: spatial or thematic

Carvalho is the author of renowned works on the period of the Brazilian Empire and the First Brazilian Republic, including A construção da ordem: A elite política imperial (The construction of order: The imperial political elite; University of Brasília, 1980), the thesis for his PhD, which he completed in 1975 at Stanford University, USA, where he analyzed the relationship between the Brazilian political elite and imperial parties. His interest in the subject dates back to his undergraduate studies, when he focused on the relationship between the elite and state building. “At UFMG, I studied local power and published my results in the journal Revista Brasileira de Estudos Políticos. At Stanford I expanded my perspective, partly because of my contact with [political scientist] Wanderley Guilherme dos Santos [1935–2019], a former member of ISEB [Higher Institute of Brazilian Studies, which operated between 1955 and 1964]. There’s nothing like leaving the country to be able to see it from the outside as a whole.”

And the specialist’s interest in the subject has not waned. “In 2014, together with [historians] Lucia Bastos and Marcello Basile, we published 362 pamphlets on Brazil’s independence,” says Carvalho. “Now, João Paulo Pimenta, Andréa Slemian, and their team have announced a bibliography of 15,000 texts on Brazilian independence. It’s fantastic. This will be of enormous help to researchers. It is also an indicator that the country’s independence and its consequences continue to be an attractive and controversial topic for researchers. For better or worse, it marked the kind of country we built, both its advantages and its drawbacks.”

According to Pimenta, many of the nineteenth century references gathered in the Independence Bibliography are from the IHGB journal, created in 1839, and publications from its regional branches, especially in Bahia, Pará, São Paulo, and Pernambuco. There are also books like Pequena história do Brazil por perguntas e respostas – Para uso da infância brasileira (A short history of Brazil in questions and answers – For use by Brazilian children) (1880), by Joaquim Maria de Lacerda (1838–1886). “It was one of the first textbooks made in Brazil, which gives great prominence to the country’s independence and historical figures such as Pedro I and the journalist Hipólito da Costa [1774–1823],” says Pimenta. Costa was the founder of Correio Braziliense, a Portuguese newspaper printed in London that circulated from 1808 to 1823. “In the nineteenth century, articles on the subject published in the media were a minority, but still represented an important percentage,” says the historian. “In the twentieth century, literature from universities, such as USP, which was founded in 1934, grew in prominence. The expansion of postgraduate courses in the 1970s consolidated academia’s primacy around this theme.”

Before that, written work on the topic peaked around the time of the centenary of Brazil’s independence, in 1922. One book from the period is Grandes vultos da Independência brasileira – Publicação comemorativa do primeiro centenário da Independência nacional (Great figures of Brazilian Independence – Commemorating the first centenary of national independence) (1922), by historian Afonso D’Escragnolle-Taunay (1876–1958), then director of the Paulista Museum and later a professor at USP. “He wrote biographies for 31 figures and established the canon of the so-called heroes of the homeland, such as Diogo Antônio Feijó [1784–1843], a priest and politician from São Paulo,” says Pimenta.

There were three women on Taunay’s list, one of whom was Joana Angélica (1762–1822), a nun who was killed trying to prevent Portuguese soldiers from invading the Convent of Nossa Senhora da Conceição da Lapa in Bahia. Another was Empress Maria Leopoldina of Austria (1797–1826), whose marriage to then Prince Regent Pedro I was part of a diplomatic agreement between Portugal and the Austrian Empire. “Her role in the political events of the time was considerable, but it would be an exaggeration to say that she played a central part in the country’s independence,” says Pimenta.

The third was Maria Quitéria de Jesus (1792–1853), popularly known as “Medeiros,” a soldier from Bahia who fought for independence. “Some people still think talking about the roles these women played in the independence process is a novelty, but their recognition dates from the beginning of the twentieth century, when they were already considered relevant,” explains Pimenta. This demonstrates why it is important that researchers have access to the bibliography on the subject, argues Slemian. “It is important to know what has already been studied to avoid falling into the trap of thinking your research is something new,” she emphasizes.

According to historians, the study of specific figures in isolation has been overtaken by a more collective approach over the last two decades. “The topic of independence has become associated with other historical perspectives, such as slavery and the formation of the nation. Today, studies on individuals continue to be carried out, but instead of researching just one woman, they focus on the female condition in the era, for example,” says Pimenta. According to Slemian, the bibliography dispels the myth that Brazilian literature on the country’s independence was concentrated in the Southeast—primarily in São Paulo and Rio de Janeiro. “What we have observed is that over these 200 years, written work on the topic has always been decentralized, with significant participation by historians from Pernambuco, Bahia, Ceará, Maranhão, and Pará, especially at the turn of the nineteenth and twentieth centuries,” concludes the researcher.