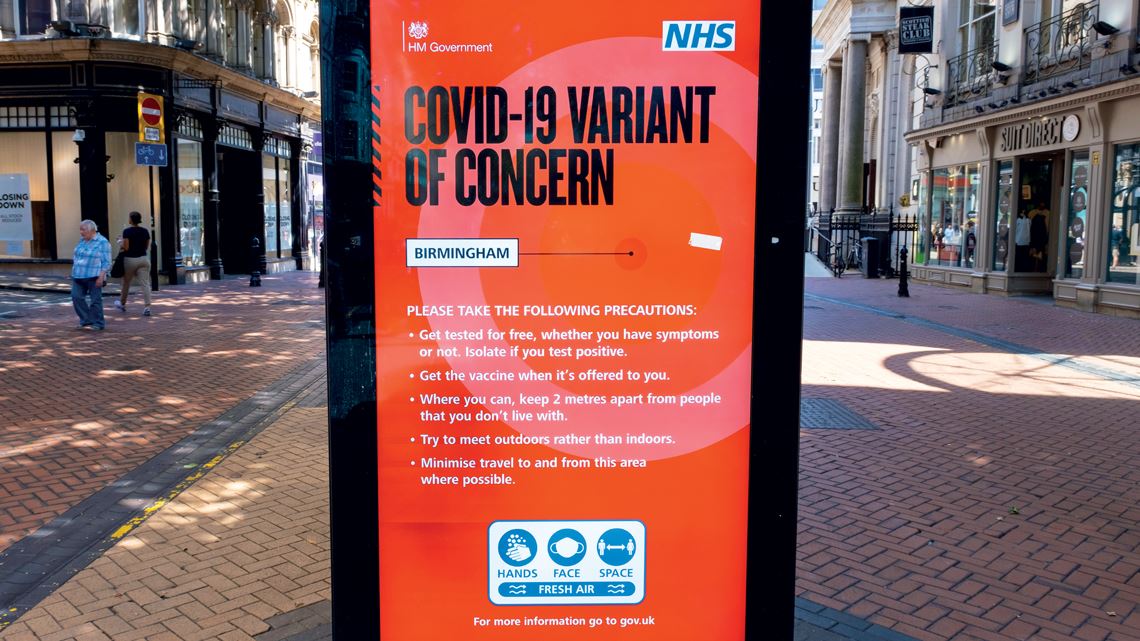 The delta variant of SARS-CoV-2, the coronavirus that causes COVID-19, was first identified in India in October 2020. By August 17 this year, it had been detected in 148 countries, according to data from the World Health Organization (WHO). Of the four variants causing the most concern, only alpha, discovered in the UK last September, has infected people in more nations, at 190. The delta variant, however, has a specific characteristic that makes it spread faster: it is twice as contagious as other strains of the pathogen.

This is probably why it has become so dominant among virus samples sequenced in countries such as the USA, Canada, Israel, the UK, and Germany. In Brazil, the city of Rio de Janeiro is so far the most affected by the advance of the delta variant. According to the Genome Network of the Oswaldo Cruz Foundation (FIOCRUZ), the gamma variant first identified in Manaus last November was still predominant in the country until the end of July, but the delta variant was already circulating in 14 states and accounted for more than 20% of sequenced samples.

The main explanation for the delta variant’s high transmissibility and rapid global spread is the high viral load in people infected, up to 1,000 times higher than in individuals affected by other strains of SARS-CoV-2. The variant’s increased transmission rate is the result of a combination of faster replication and a shorter incubation period, epidemiologist Benjamin Cowling of the University of Hong Kong told the journal Nature.

A study coordinated by epidemiologist Jing Lu of the Guangdong Provincial Center for Disease Control and Prevention in China, which monitored 62 people quarantining after contracting COVID-19, provided information on the delta variant’s shorter incubation process. Preliminary results published by the Chinese researchers on the medRxiv preprints repository (for articles not yet peer-reviewed) in late July indicate that the variant was identified four days after the patients were exposed to the virus. The average incubation period for the other variants is six days. The patients monitored in the study were among the first to be infected by the new strain in mainland China back in 2020.

The rise of the delta variant has caused alarm in many places that previously thought they had the pandemic reasonably under control, or at least that the most dramatic times were behind them. One concerning aspect is that large volumes of the virus variant are found in the respiratory tract of those infected, regardless of whether they experience symptoms or have been double vaccinated against COVID-19. Although rare, there have been recorded cases of people who have received two doses of the vaccine becoming infected with the delta variant. These individuals, however, transmit the virus for less time than those who have not been immunized.

According to the US Centers for Disease Control (CDC), preliminary research suggests the delta variant may cause more severe cases of COVID-19 than others among unvaccinated people. Thus, although the protection against the delta variant provided by the vaccines may be lower, being inoculated still makes a difference. If it is true that the delta variant spreads faster because it has a higher viral load, there is not yet enough data to say whether it is more lethal or not.

Data from Provincetown, Massachusetts, presented in the CDC’s weekly Morbidity and mortality report at the end of July showed that in a COVID-19 outbreak in the region driven by the delta variant, approximately 74% of 469 cases were fully vaccinated. Four out of every five people admitted to hospital during the outbreak had been immunized against the novel coronavirus. None of them died, reinforcing the vaccine’s effectiveness. The agency thus recommended the continued use of masks, which have been abandoned in some parts of the USA.

A recent study carried out in the UK estimated that the risk of being admitted to hospital with the delta variant was nearly double that of the alpha variant. In Brazil, although data from a study in Rio de Janeiro revealed that the delta variant was responsible for 45% of 101 investigated cases, it is particularly difficult to paint a complete picture of the situation. “It is impossible to compare Brazil with other countries. We do very little testing, especially with genome mapping. So we are always behind in identifying the real impact of each variant here,” says epidemiologist Pedro Hallal, from the Federal University of Pelotas (UFPEL). According to him, the subject of testing has not received the attention it deserves since the beginning of the pandemic, despite the country having the technical capacity and human resources needed to monitor the situation much more closely.

The delta variant’s spread raises a question that has been asked repeatedly during the pandemic: for how long and against which strains of SARS-CoV-2 will the current generation of vaccines remain effective? If a new variant appears that is able to escape the vaccine, it will likely lead to a resurgence of COVID-19. “It is true that the delta variant has a greater capacity to spread, but as far as it has been possible to demonstrate, all current COVID-19 vaccines offer immunological protection against it, in a similar way to how they have worked against other forms of the coronavirus circulating around the world so far,” says microbiologist Luís Carlos de Souza Ferreira, from the Institute of Biosciences (IB) at the University of São Paulo (USP).

Ferreira notes that although antibodies may function more or less effectively against the coronavirus spike protein depending on the SARS-CoV-2 variant, protection in vaccinated individuals remains effective. “This is probably because the vaccines stimulate protective immune responses that do not rely solely on the production of antibodies,” says the USP researcher. All of the current vaccines are based on the first viruses isolated from China or Europe. Ferreira comments that attempts to develop vaccines using sequences derived from SARS-CoV-2 variants that emerged later, such as the gamma and delta variants, have not been shown to offer any greater protection than the vaccines currently in use. 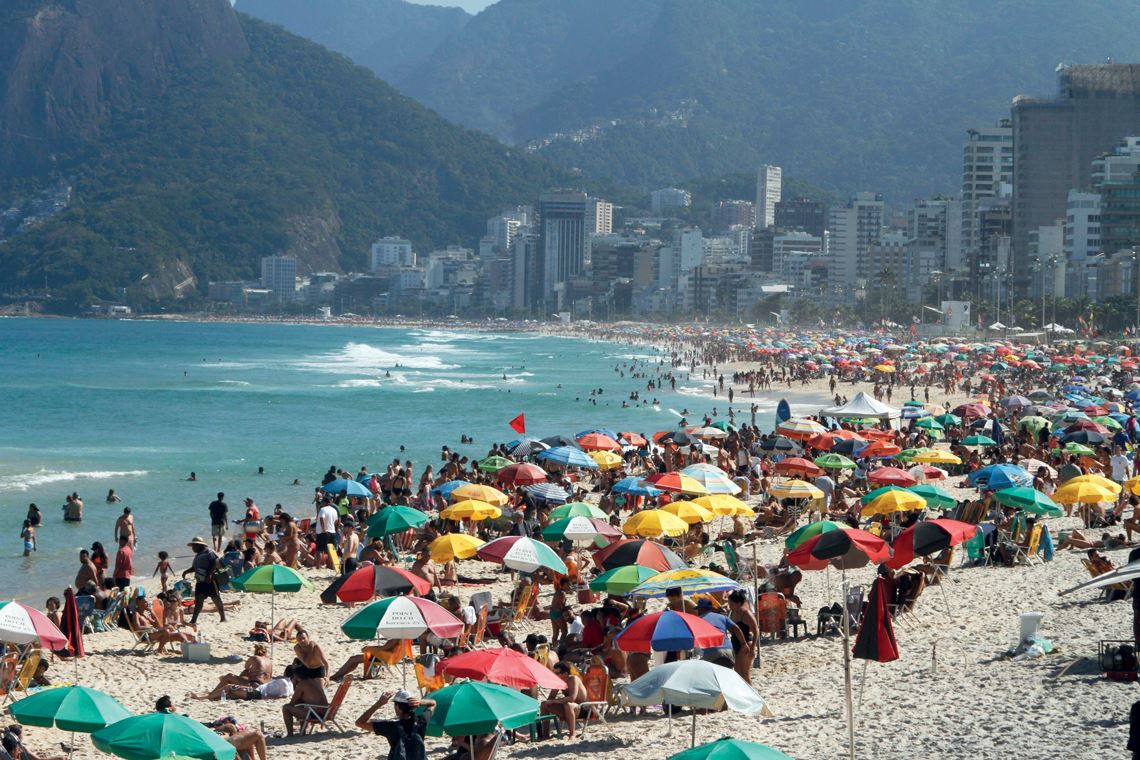 Ipanema beach crowded with people on a Sunday at the end of July, when the pandemic was worsening once again in Rio de JaneiroJosé Lucena / Zuma Press / Fotoarena

A preprint posted in The Lancet’s section of the SSRN repository on August 5 indicates that a double dose of the CoronaVac vaccine was 69.5% effective at preventing pneumonia, a condition associated with COVID-19, and prevented 100% of severe cases of the disease caused by the delta variant. The study involved 10,813 people and was carried out by the Guangdong Provincial Center for Disease Control and Prevention. CoronaVac is manufactured in Brazil by the Butantan Institute in partnership with its developer, Chinese biopharmaceutical company Sinovac.

The spread of the delta variant—which seems to infect a small number of people already vaccinated with two doses but rarely leads to hospitalization or death among those immunized—could make the quest for herd immunity against COVID-19 even more difficult. Herd immunity—when transmission of a pathogen is stopped because the majority of a population is immune to the infectious agent— can arise in two ways, which can occur individually or at the same time: either most people in a population come into contact with the pathogen, recover from infection, and develop some level of immunity; or they receive an effective vaccine against the infectious agent. According to a report in British newspaper The Guardian, epidemiologist Andrew Pollard, head of the University of Oxford group that developed the vaccine commercially produced by AstraZeneca, believes it is not possible to achieve herd immunity due to the existence of the delta variant.

With the vaccines appearing to lose some effectiveness six months after being applied, some countries, such as Israel and the UK, have decided to give a third booster dose to their oldest populations. The Brazilian Ministry of Health and the São Paulo State Government made the same decision at the end of August. However, Tedros Adhanom Ghebreyesus, director-general of the WHO, says that administering a booster dose to try to stop the advance of the delta variant should be ruled out until the end of September at least. “I understand the concern of all governments to protect their people from the Delta variant. But we cannot accept countries that have already used most of the global supply of vaccines using even more of it,” Ghebreyesus said in a press release. “We need an urgent reversal, from the majority of vaccines going to high-income countries, to the majority going to low-income countries, where few people have been vaccinated.”

Epidemiologist Kristian Andersen from Scripps Research, USA, told the journal Science that it is essential to develop new versions of the vaccines specifically for the delta variant. But for him, the choice between vaccinating the unprotected population and promoting booster campaigns represents a false dichotomy. “We need to do both. And that requires a war footing that we are not seeing right now,” he said. As of August 25, the pandemic had caused some 213.5 million cases and 4.4 million deaths worldwide, according to a survey by Johns Hopkins University, USA. Brazil has suffered the second most deaths of all countries worldwide, with almost 575,000 victims.