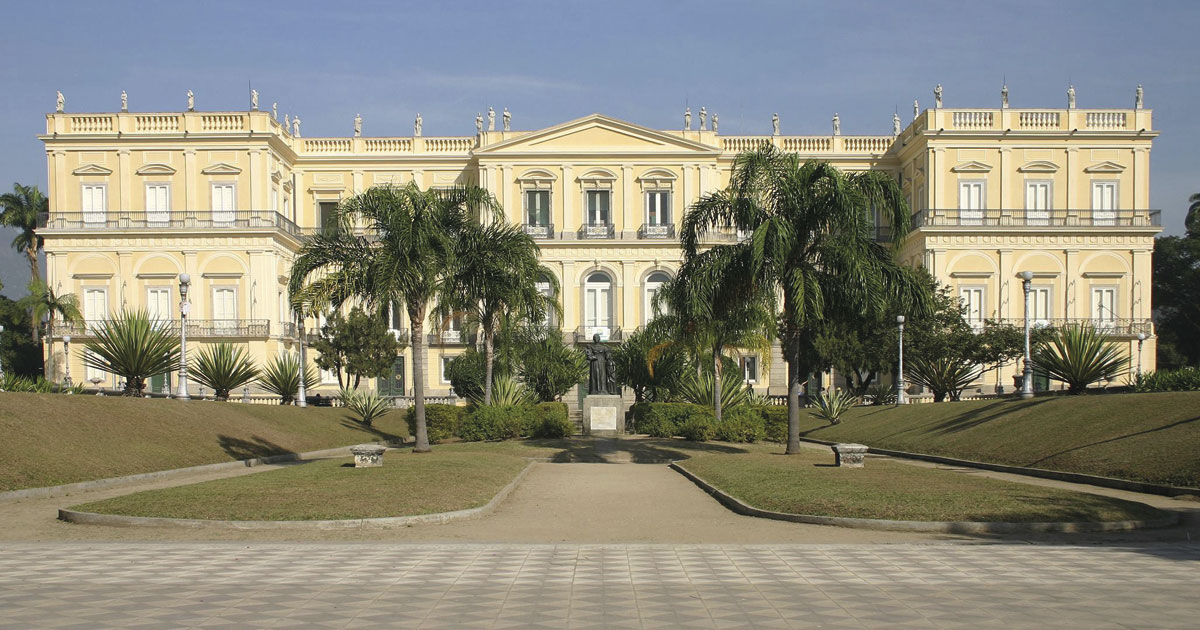 21,000 m2 are occupied by the São Cristóvão Palace at Quinta da Boa Vista

As it celebrates its 200th anniversary, Brazil’s National Museum is faced with the challenge of reclaiming its important role in disseminating natural sciences in Brazil. Although boasting a vast collection of more than 20 million items—a wealth of material for research in the fields of anthropology, botany, entomology, geology, and paleontology—Brazil’s oldest scientific institution has fallen into disrepair, with walls wet from seepage, windows with broken panes, and furniture infested with termites.

The problems, however, have not discouraged geologist and paleontologist Alexander Kellner, the museum’s new director, who is confident he can turn things around. The day after he took office, on February 2, he reopened the room where emperors Pedro I and II once slept, in what in bygone days was the São Cristóvão Palace, the royal family’s official residence from 1808 to 1889. Previously used for storage, the room has now been repurposed as his office, where plans are being drawn, he says, to restore the institution to its former glory.

Dom Pedro II (encircled) during his travels in Egypt (1876), from which he brought items now in the museum’s collectionNational Library

The National Museum was founded in June 1818 as the Royal Museum, at a time when interest in natural history had been heightened by the coming of European naturalists to map out the territory, prospect for plants and minerals, and develop and teach more efficient farming techniques (see Pesquisa FAPESP issue no. 171). “In the interest of propagating the knowledge and study of the natural sciences in the Kingdom of Brazil, in which are to be found thousands of objects worthy of observation and examination and which may be useful to commerce, industry, and the arts, I hereby determine that a Royal Museum be established in this Court,” Dom João VI (1767–1826) wrote in the decree creating the museum.

The museum traces its original roots, however, to the House of Natural History, created in 1784 under viceroy Luis de Vasconcelos e Souza (1742–1809). Popularly known as “Casa dos Pássaros” (house of the birds), the museum was housed in a building used to store zoological articles on Avenida Passos, in downtown Rio de Janeiro, as an arm of the Lisbon Museum of Natural History, in Portugal, to which were sent natural specimens and indigenous adornments collected in Brazil. The museum functioned for more than two decades before it was abandoned, its collection going to the War Arsenal, where it remained until the creation of the Royal Museum.

Modeled after European natural history museums, the Brazilian institution had scientific collections, libraries, archives, laboratories, and exhibitions. It was first established in an old house in Campo de Sant’Anna, downtown Rio. Besides the collection from the defunct House of Natural History, the museum also housed a collection of rare minerals brought by the royal family and organized and classified by the German mineralogist Abraham Werner (1749–1817). Mineralogy was also the field of expertise of the museum’s first director, Friar José Batista da Costa Azevedo, who earned a degree in natural sciences from the University of Coimbra.

Under his successor, João da Silveira Caldeira (1800–1854), in 1824 the Royal Museum created the first chemical laboratory in Brazil. “It was used to perform mineralogical and botanical analyses,” explains historian Heloísa Bertol Domingues of the Museum of Astronomy and Related Sciences (MAST), in Rio. Silveira Caldeira graduated in medicine from the University of Edinburgh, in Scotland, and later perfected his training in Paris, France. In 1825 he published Nova nomenclatura química portuguesa (New Portuguese nomenclature in chemistry), one of the first compendia of chemistry to be written in Brazil.

“Alongside its science-related activities, years later the Royal Museum established an educational outreach program offering practical courses for the general public,” says Domingues, who has done research on the institution’s role in teaching natural sciences in nineteenth-century Brazil, together with Magali Romero Sá of Oswaldo Cruz Foundation’s Casa de Oswaldo Cruz (COC-FIOCRUZ). Between July and October 1875, the museum hosted lectures on botany, zoology, archeology, and ethnography and mineralogy. “The response to these courses was very positive,” says Sá. This led then-director Ladislau de Souza Netto to make the course program a priority for the institution.

As it continued to develop education activities, the museum also expanded its collections. Between 1822 and 1823, the mineralogist, naturalist, and politician José Bonifácio de Andrada e Silva (1763–1838), Minister of the Interior and of Foreigner Affairs under Pedro I, convinced foreign naturalists to part with items collected during their expeditions in exchange for government support for their travels. Among these were Georg Heinrich von Langsdorff, Johann Natterer, and Auguste de Saint-Hilaire.

Empress Leopoldina also supported research in natural history under the auspices of the Royal Museum, helping to further expand collections. Her son, Dom Pedro II, was a science enthusiast and lent much support to the museum (see Pesquisa FAPESP issue no. 131). The museum’s natural history collections were also expanded through donations from private benefactors such as Antônio Luis Patricio da Silva Manso, chief surgeon and inspector of the Military Hospital of the Province of Mato Grosso, who donated about 2,300 specimens of 266 plant species to the museum in 1823. July 1863 saw the creation of the museum’s Central Library—one of the largest libraries in Latin America specializing in anthropological and natural sciences, with 500,000 titles.

Following Brazil’s proclamation of Independence in 1822, the institution was renamed as the National Museum. In 1889, with the proclamation of the Republic and the exile of the imperial family, the museum was relocated to the majestic São Cristóvão Palace at Quinta da Boa Vista. The permanent exhibitions at the museum’s new home were opened to the public on May 25, 1900. In the following decades, the institution became increasingly prolific in international scientific collaboration, publishing, and public education. Important personalities on the global science scene visited the museum, among them the German physicist Albert Einstein (1879–1955) and Polish chemist Marie Curie (1867–1934).

The notion that the National Museum should cater to the general public gained greater traction between 1937 and 1955 under anthropologist Heloisa Alberto Torres (1895–1977). She saw the museum as part of a comprehensive, national cultural framework. Following her appointment in 1937, she made anthropology into a scientific instrument for preserving Brazilian culture, in a manner envisaged by the federal government during the Vargas Era between 1930 and 1945, as researcher Carla da Costa Dias, of the School of Fine Arts at the Federal University of Rio de Janeiro (UFRJ), reports in a 2006 article in Revista de Antropologia (Anthropology journal). The institution increased its involvement in research when in January 1946 the museum came under the management of the University of Brazil, now UFRJ.

Important Brazilian researchers and intellectuals subsequently served on its staff, including anthropologist Edgard Roquette-Pinto, a local pioneer of radio broadcasting, and biologist and politician Bertha Lutz, one of the first feminist activists in Brazil. In the 1960s the museum began training researchers and created Brazil’s first graduate degree program in social anthropology. In the field of ​​botany, the museum created a master’s degree program in 1972 and a doctoral program—Rio de Janeiro’s first in this field—in 2001. With around 500,000 plant specimens, its botany collection is the largest in Brazil.

The building housing the National Museum was declared a heritage site in 1948 by the National Institute for Historical and Artistic Heritage (IPHAN). The institution subsequently fell on hard times as funding shortages took their toll on upkeep, and visitors began to dwindle. In January 2015, only 13,237 people visited the institution, 13,000 less than in the same period in 2014. In 2017 the National Museum attracted around 180,000 visitors—Kellner hopes to raise the figure to 1 million.

Only parts of the museum’s collections are exhibited to the public, among them plant and animal specimens of Brazilian biodiversity, mummies from Egypt, Incan and Brazilian indigenous artifacts, South American dinosaur skeletons, and the Bendego meteorite, found in Bahia’s sertão (badlands) in 1784 and brought to Rio 100 years later. Weighing 5.36 tons, it is the largest known to date in Brazil.

With more than 5,000 items, the museum has the largest Egyptian antiquities collection in Latin AmericaWikimedia Commons

The museum is also actively engaged in research in different fields. At the Department of Anthropology, for example, the Laboratory for Research on Ethnicity, Culture, and Development (LACED) conducts research on interactions between indigenous and nonindigenous populations and how this cultural diversity can enrich social dynamics. At the Department of Botany, researchers’ interests include plant identification and anatomy, algae identification and ecology, and the study of pollen and relationships between plants and pollinators. The Invertebrate Department is a leading center for research on marine and freshwater invertebrates and arachnids.

Magali Romero Sá believes that, despite its financial woes, the National Museum has not lost its relevance. “It remains one of the most important research institutions in Brazil,” says the historian. Alexander Kellner concurs. “The National Museum is an integral part of Brazil’s political, scientific, and artistic history,” says the researcher, who is already in discussions toward partnerships with private entities and is attempting a meeting with the federal government to get funding for repairs to the São Cristóvão Palace. “The National Museum is a winning project,” says Kellner. “But we need help to transform it into a grand natural history museum like the ones in Europe and the United States.”