The last thirty years of financial autonomy at São Paulo’s three state universities parallel a period during which these schools vigorously protected the intellectual property generated by their researchers, increased collaboration with the industrial sector, and encouraged the formation of technology-based companies. During the 1980s, research collaborations were already frequent between business and the University of São Paulo (USP), University of Campinas (UNICAMP) and São Paulo State University (UNESP). However, in 1989, the universities were granted a guaranteed percentage of sales and services tax (ICMS) revenues; this new source of funding influenced their ability to produce innovation that had an economic impact on society. “An essential condition for a university to collaborate with business is to have the ability to do vigorous research. And financial autonomy was the key to increasing the scientific production of São Paulo state universities,” says physicist Marcos Nogueira Martins, director of the USP Innovation Agency, referring to the 16-fold increase in the number of scientific works published by the three institutions over the last three decades.

The data on science produced in partnership with business demonstrate this evolution. In 1989, just over 0.5% of USP’s scientific output indexed on the Web of Science database was coauthored by researchers associated with companies. By 2017, that percentage had risen to 2.7% (see table on page 37). The rate observed at UNICAMP increased from 1.5% to 2.5% over the same period, while UNESP went from zero in 1989 to close to 2% of articles being coauthored with company researchers in 2017. By comparison, the average in the United States was 2.8% between 2015 and 2017, while that of EU countries was less than 2.5%—with France and Germany exceeding 4%. Data on coauthoring between researchers from São Paulo universities and companies were published in May in the book Innovation in Brazil: Advancing development in the 21st century, in a chapter written by FAPESP’s scientific director, Carlos Henrique de Brito Cruz. Here, he addresses ways to evaluate this type of collaboration around the country. The chapter shows that in the case of USP and UNICAMP, companies’ participation in research funding exceeded the levels found at large foreign universities. Private research expenditures at UNICAMP were equal to approximately 13% of the contracts signed with public funding agencies in 2016, a rate slightly higher than USP’s 12%. This performance is on par with institutions such as Yale University or the University of California, San Francisco.

Read more:
– Tools for planning the future
– The race for excellence
– Growth in numbers

The list of large corporations that have research and development (R&D) partnerships with the state universities of São Paulo is extensive: Petrobras, BASF, Cargill, LG, Pirelli, and Natura are some of the universities’ most frequent collaborators. According to economist Renato Garcia, USP, UNICAMP, and UNESP were well positioned at the time companies began to look for outside support for their R&D efforts. “Until the 1990s, innovation at companies in Brazil was accomplished in-house and generated a set of products and processes capable of guaranteeing competitiveness. This has become insufficient over the last 15 years, and universities have become an advantageous conduit for supplying companies with knowledge and innovation,” explains Garcia, from the Institute of Economics at UNICAMP. 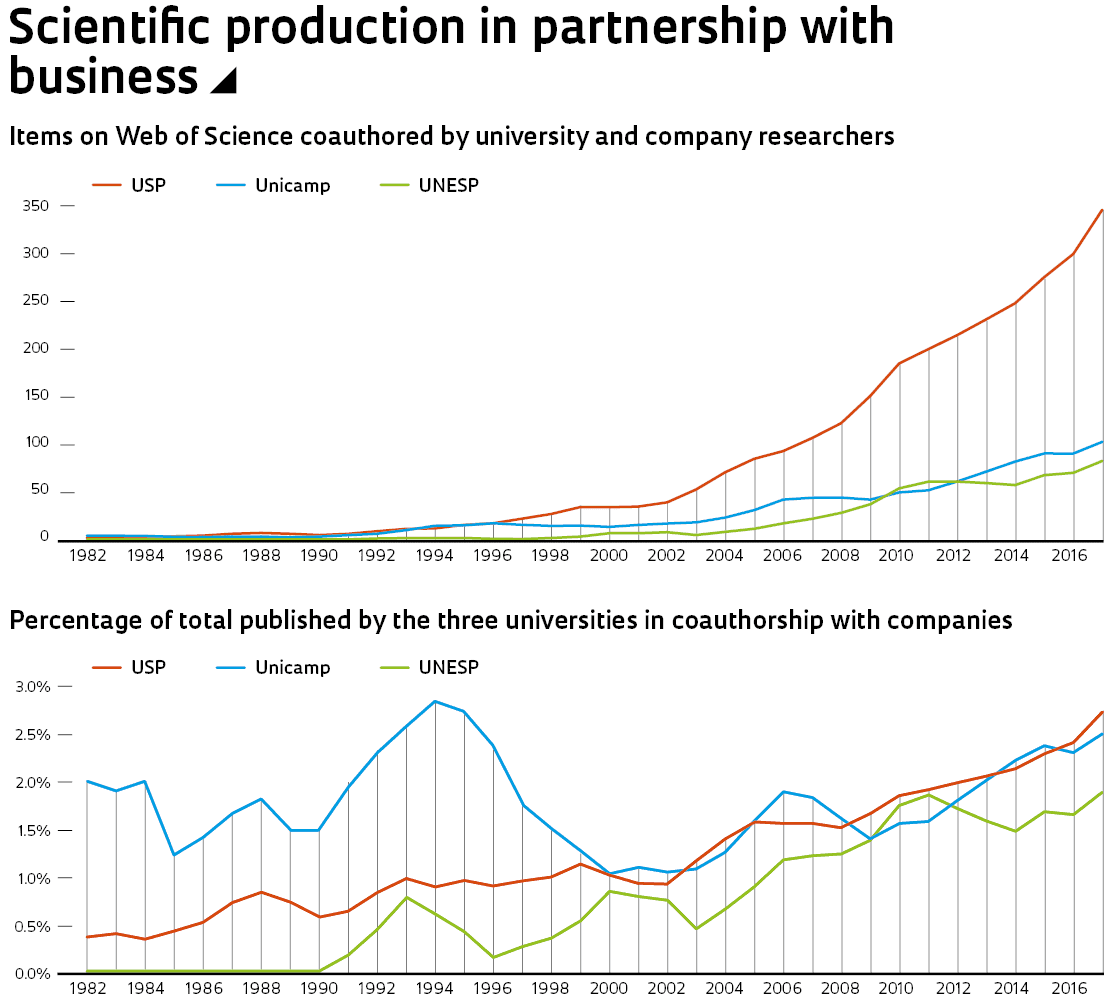 A study commissioned last year by the Brazilian Intellectual Property Association (ABPI) based on 4 million curricula vitae on the Lattes platform showed that out of a group of 15,600 Brazilian researchers who reported activity requiring intellectual property protection, more than 84.5% had high levels of academic productivity, with an average of 27 published articles. The three São Paulo state universities stand out in this study: among the 11,400 researchers and inventors across the country who had been granted patents, 7.3% worked at USP, 4% at UNICAMP, and 2.3% at UNESP.

ver the past decade, the creation of innovation agencies at the three universities has helped to systematize intellectual property protection, highlight research results of interest to the private sector, and negotiate technology transfer contracts. UNICAMP launched its agency, Inova, in 2003, a year before the creation of the Innovation Law, which determined that all science and technology institutions in the country should develop Technological Innovation Centers (NIT) to manage their innovation policies. The university has always distinguished itself in Brazilian rankings for patent applications. In the latest list released by the National Institute of Industrial Property (INPI), referring to 2017 numbers, UNICAMP was in first place in the overall ranking, with 77 patent filings. Only one company, CNH Industrial, appears in the list’s top ten, an elite club otherwise dominated by universities. With over 1,000 active patents, the university boasts excellent technology-transfer performance. In 2018, they had 115 active licensing agreements with various companies, which generated royalties of R$1.7 million for the university. They signed 22 new licensing agreements in 2018 alone.In the assessment of physicist Newton Frateschi, the agency’s director, the financial stability provided by autonomy has had a transformative effect on UNICAMP. “A fixed source of funds has enabled state universities to invest in planning. UNICAMP, which has always been interested in interacting with the industrial sector, is able to execute technology transfer strategies and enhance corporate access to their innovations,” he says. Guilherme Ary Plonski, scientific coordinator of the USP Center for Technology Policy And Management, also sees a relationship between autonomy and innovation, albeit an indirect one. “Compared with the trajectory of the federal universities, which did not achieve financial autonomy, I suspect that the performance of São Paulo’s state universities would have been weaker in terms of innovation if the 1989 legislation hadn’t been passed,” Plonski says. “The fact is that in the late 1980s there was a zeitgeist—an expression that designates the spirit of a time—favorable to both autonomy and innovation in São Paulo.”

Plonski points out that when the autonomy decree was signed, intellectual property protection at USP had a significant legal bias. Created in 1986, the Advisory Group for Development of Inventions (GADI) established that half of the proceeds from the commercialization of intellectual property would go to the researcher. “It was a generous share. Today, the standard is 30% for the researcher,” he says. GADI was incorporated into the Executive Coordination of University Cooperation and Special Activities (CECAE) and was the origin of the university’s innovation agency in 2005. In the early years of autonomy, Plonski recalls, USP prided itself on partnering with large companies, and in the early 1990s, it was asked to increase such participation. “I remember that the dean, Roberto Lobo [1990–1993], used to show interlocutors a special edition of the Jornal da USP that described university partnerships with companies like Petrobras or Metal Leve,” says Plonski. He says that Lobo was once questioned about the university’s contribution to small businesses. “From this question came the idea of creating a channel through which any entrepreneur or business owner could come to USP and learn how its researchers could collaborate,” says Plonski. As the telephone was the dominant means of communication at the time, a service for meeting companies’ technological demands, called Dial-Technology, was launched. The resource, which now works over the internet, is offered in partnership with the Brazilian Technical Response Service. 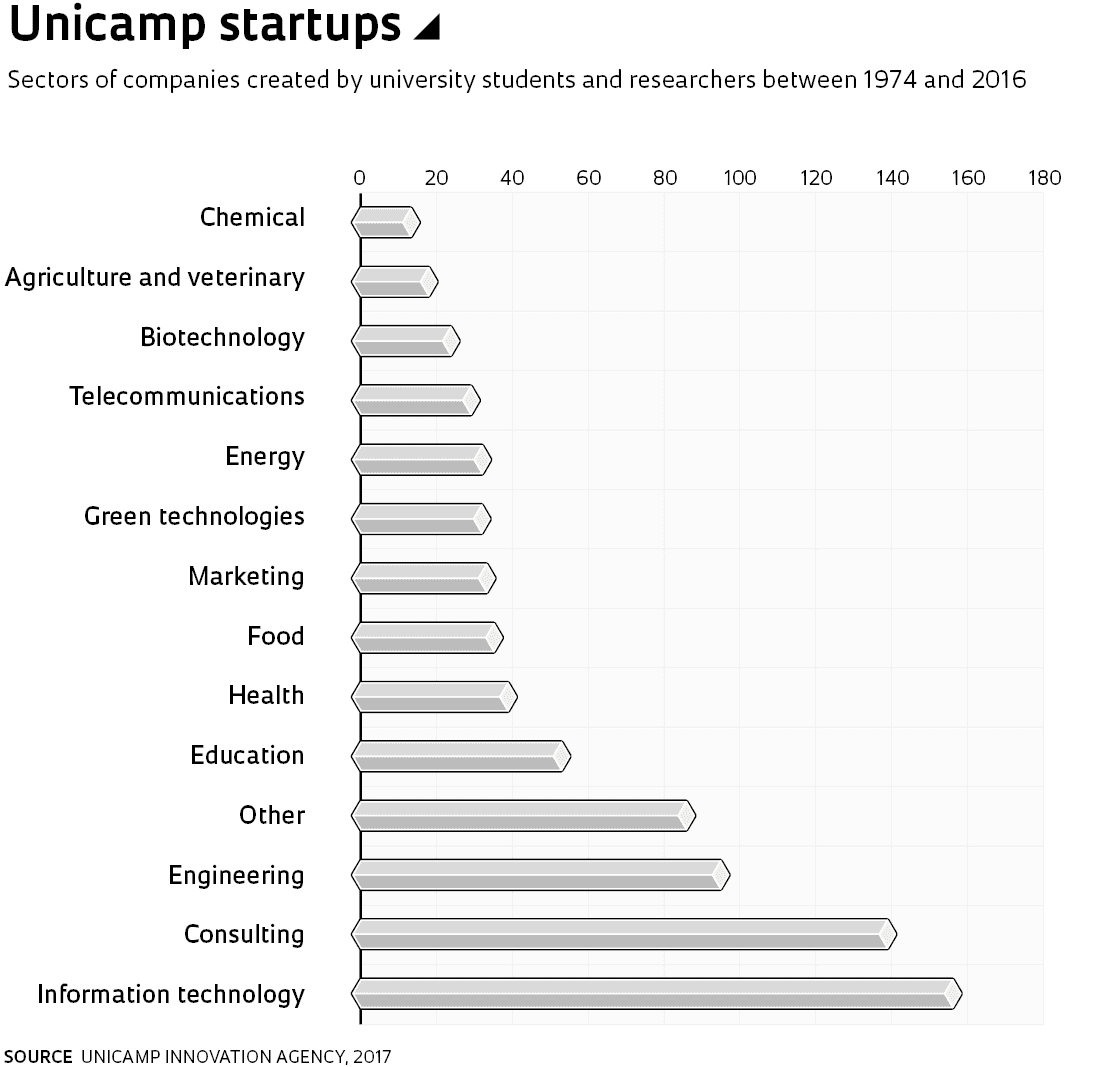 USP currently has 1,300 patents involving technologies and products developed by its researchers, but the number of signed licensing agreements currently is in the dozens. Even so, royalty revenue in 2018 from exploitation agreements reached R$3.4 million. Ninety percent of that amount comes from a single license: Vonau Flash, a nausea and vomiting control drug developed at the USP School of Pharmaceutical Sciences in partnership with Biolab Sanus. Marcos Nogueira Martins, director of the USP Innovation Agency, sees some exaggeration in the number of patents maintained by the institution. “Keeping a patent active is expensive and making the payment is only worthwhile when there are good prospects for licensing. But letting patents expire isn’t simple, since they’re viewed by regulators as an institutional asset and add points in the university’s performance in international rankings.”

UNESP’s experience is the most recent. The university created its innovation agency in 2010 and today maintains a portfolio of 361 patent filings, with 13 licensed technologies, including a system for calculating carbon credits and a serum to combat bee-sting poisoning. The university is in the final stages of signing an agreement on the serum project. “We have been slow to invest in a culture of intellectual property protection, and we’re developing alternative methods of transferring technology to society, since many of our researchers have created innovations that are socially interesting but haven’t attracted corporate attention,” says biologist Wagner Cotroni Valenti, director of the UNESP Innovation Agency. One of the new fronts on which the university is operating is the Academic Doctorate for Innovation program, launched in 2019, which offers ten scholarships for those interested in pursuing a doctorate in topics of interest to the private sector. The research will be carried out within UNESP’s partner companies, such as Moinho Nacional, in Assis, and the Ticon paint factory, in Sorocaba, both in thestate of São Paulo.

Creating companies
One way to measure the impact of university innovation is to count the number of startups created using the knowledge generated by their graduates. USP claimed the title of Brazil’s “unicorn barn” after a study done by consulting firm KPMG showed that ten of the university’s graduates were founders of Brazilian companies that had hit valuations of US$1 billion before they even went public, such as Nubank, 99, and Gympass. A study performed by USP also showed that many alumni have started their own businesses. Out of a survey of 180,000 students who graduated from 1974 to 2014, 31,000 were registered with the Board of Trade as having set up companies in the commerce (11.3%), health (7.9%), construction (7.2%), and financial services (6.2%) sectors, among others.

UNICAMP has given birth to approximately 700 “daughter companies,” of which more than 600 are currently active. Daughter companies are ventures created by students, alumni, and people who are affiliated with the institution, as well as businesses whose activity derives from an innovation licensed by the university or companies that have graduated from their technology incubator. Together, they earn approximately R$4.8 billion per year and generate more than 30,000 jobs. These companies include multinationals such as CI&T, a digital solutions specialist, and Movile, the Latin American leader in developing platforms for commerce and mobile content. UNESP can also tally its own daughter companies, which currently number approximately 150. The crown jewel is Predilecta Alimentos, in Matão, São Paulo, the largest guava processor on the planet, created in the 1970s by a former student of the Araraquara Chemistry Institute.