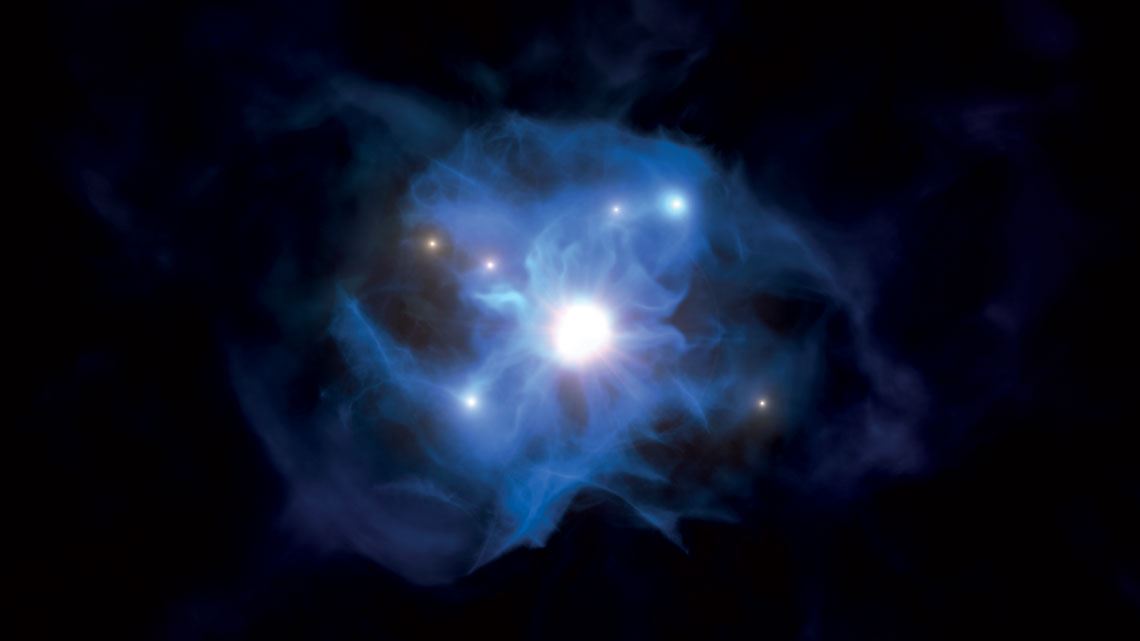 In early September, the Laser Interferometer Gravitational-Wave Observatory (LIGO) in the United States and the Virgo Interferometer in Italy announced they had detected the strongest gravitational waves since this type of emission was first captured in September 2015. The source of the powerful new signal, recorded on May 21, 2019, was the merger of two black holes, with masses of 85 and 66 times the mass of the sun. When they merged the Universe was about half its current age of 13.8 billion years, and the union of these two extremely dense objects created an even more massive black hole of about 142 solar masses. During the event, the energy released in the form of gravitational waves—disturbances in the curvature of space-time predicted by Albert Einstein (1879–1955)—was equivalent to eight solar masses. Given its extraordinary gravitational field, a black hole doesn’t allow anything to escape its interior, not even light, a characteristic that makes observing them difficult.

The “sound” signal from the merger of the two black holes, called GW190521, was picked up by the detector in North American and its European counterpart, located in Tuscany. “Unlike the black hole mergers that we usually detect, which reverberate like an increasingly high-pitched chirp, GW190521 only lasted a tenth of a second and was more like a bang,” says American astrophysicist Nelson Christensen, head of the Artemis laboratory at the Côte d’Azur Observatory in Nice, France, and one of the coordinators of the team that published two scientific articles on the discovery. “So we realized that we were dealing with an exceptionally massive [gravitational wave] source.”

Based on the type of vibration the gravitational waves generate, researchers infer the characteristics of the event that produced them. “With mergers of black holes, we’re able to estimate both the mass of the objects that merged, and the resulting mass,” says astrophysicist Odylio Aguiar, from the National Institute for Space Research (INPE), who coordinates Brazilian participation in the LIGO consortium. The GW190521 signal is the most solid evidence to date that intermediate-mass black holes (IMBHs), with masses between 100 and 100,000 suns exist. Previously, only black holes that were very small or extremely large were known.

Supermassive black holes at the center of galaxies are between 100,000 and billions of solar masses

It’s not yet understood if there are specific spots in the universe that tend to harbor intermediate-mass black holes or if they tend to be scattered across different regions of space at random. “They may form at the periphery of galaxies or maybe they are at the center of dwarf galaxies,” comments Dutch astrophysicist Roderik Overzier, from the National Observatory, in Rio de Janeiro. “Or even in globular clusters [spherical-shaped concentrations of up to a million very old stars, formed more than 10 billion years ago].” Since the 2000s, astrophysicists have suspected that this type of black hole could form in the cosmos, however, there was no irrefutable evidence of their existence.

Until the LIGO-Virgo observations there was only evidence for black holes at two scales of magnitude: stellar black holes, with up to 65 solar masses, formed from remnants of the deaths of certain types of stars, and the supermassive black holes between 100,000 and billions of solar masses that exist at the center of most, if not all, galaxies in the universe. “The process that leads to the formation of intermediate black holes is still unknown,” says astrophysicist Rodrigo Nemmen, from the Institute of Astronomy, Geophysics and Atmospheric Sciences at the University of São Paulo (IAG-USP). “We only know the origins of stellar black holes.”

Some stars reach the end of their lives with a violent explosion, called a supernova. This event releases enormous quantities of matter and radiation.  If the supernova remnants have a collapsed mass between 1.4 and 2 solar masses, a very dense, compacted body called a neutron star is formed. When the remaining nucleus of the exploding star is greater than 3 solar masses, the matter continues to collapse (accumulating into an increasingly smaller volume), generating an even more dense, compacted object: a black hole. It is common for smaller black holes to have a companion star from which they strip away matter. This process of gravitational contraction of a single star, according to physicists’ calculations, can generate black holes with up to 65 solar masses. To explain black holes above this limit, there are several hypotheses: they may be formed by the steady accumulation of dust and gas in space, by smaller black holes uniting; or they may even result from the merger of two or more very massive stars collapsing. 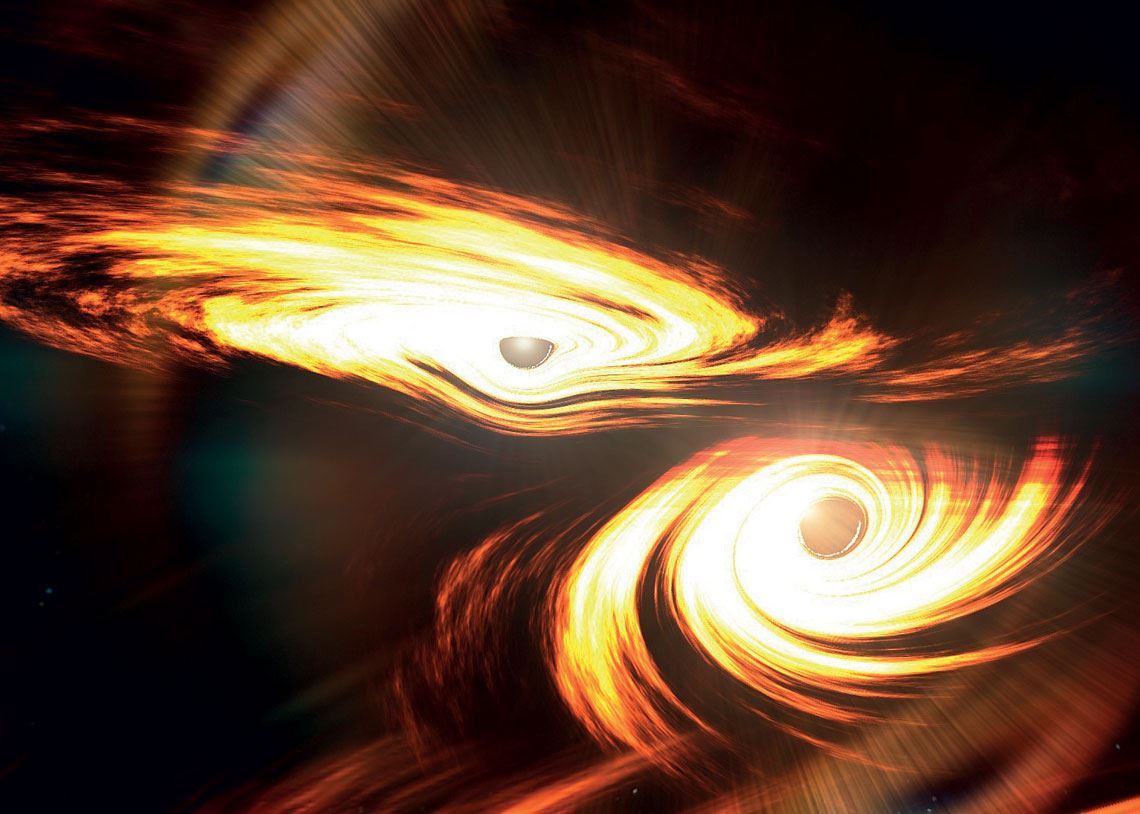 Despite the huge difference in mass between stellar black holes and supermassive black holes, these objects share the same characteristics, regardless of their size. They are described by astrophysicists as regions of space in which an extraordinary amount of matter is compressed into a tiny volume. This phenomenon generates a gravitational field so strong that all matter, once it crosses a threshold distance from the black hole called the event horizon, will be pulled into it. The captured matter is concentrated into a central point within this region of spacetime known as the singularity, which has infinite density where the known laws of physics are not valid.

By their very nature, black holes do not emit any form of radiation, except perhaps what’s known as Hawking radiation, a hypothetical phenomenon proposed by the renowned late British physicist. The only sure way to detect them is by indirect means, by observing disturbances that their powerful gravitational fields cause in the surrounding space. Various anomalies may indicate the presence of these massive, all-consuming objects. One is intense emissions of certain types of radiation, such as X-rays and radio waves, in regions of space that appear to be empty. This energy is produced where the edge of the accretion disk of orbiting matter contacts the event horizon, the boundary beyond which matter cannot escape the black hole’s gravitational field. Last year the Event Horizon Telescope (EHT), which uses data collected by eight radio astronomy observatories, obtained the most significant images yet of the halo surrounding a supermassive black hole, one with 6.5 billion solar masses. The image shows a slightly defocused, colored circle around a blackened region in the center of the M87 galaxy. It’s not capturing the black hole itself, but rather its surroundings or shadow. 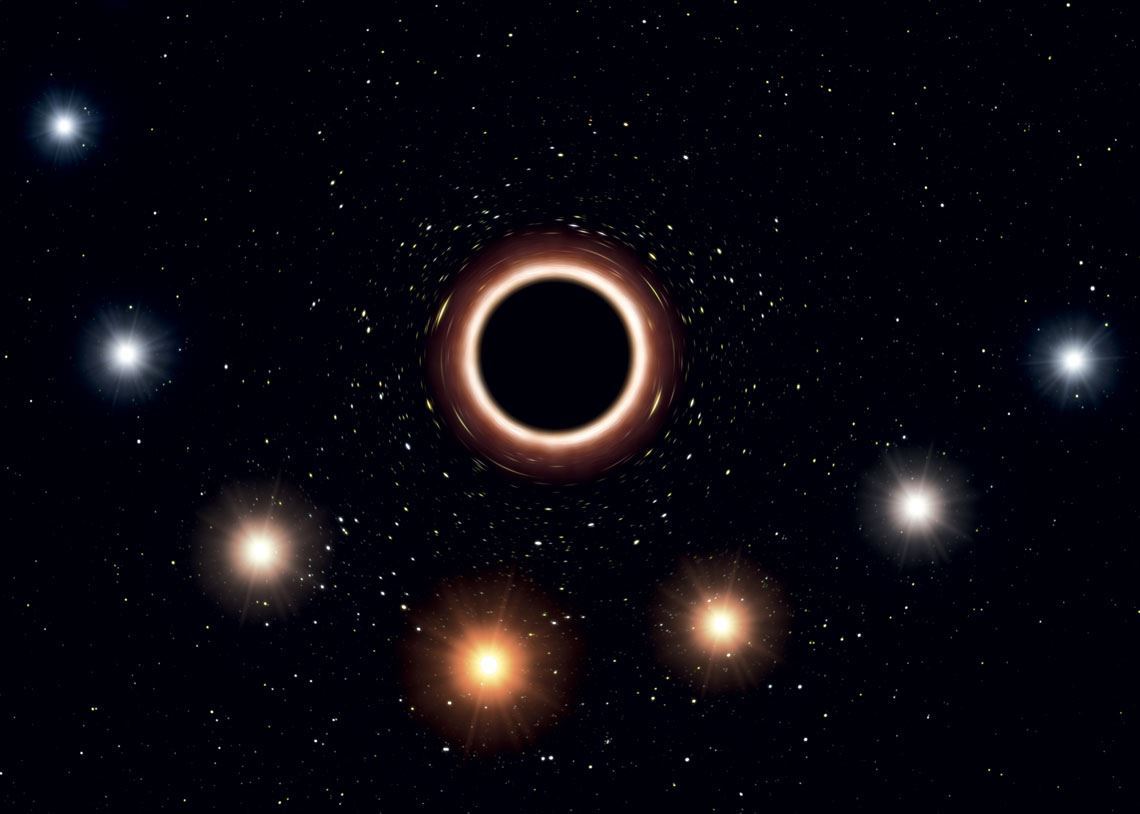 Illustration reconstructs the trajectory of star S2 around the black hole at the center of the Milky WayESO / M. Kornmesser

Another clue to the presence of black holes are observations of anomalous, extremely accelerated orbits of one star or a group of stars around a seemingly empty point. Continuous monitoring of this second phenomenon in the stars located around the center of the Milky Way, such as S2, proved that a supermassive black hole of about four million solar masses lurks there, named Sagittarius A*. The achievement earned the 2020 Nobel Prize in Physics for German scientist Reinhard Genzel, of the Max Planck Institute for Extraterrestrial Physics, and American Andrea Ghez, of the University of California at Los Angeles (UCLA). The third recipient of this year’s award was British theorist Roger Penrose, at the University of Oxford, in England, for his studies showing that the existence of black holes is compatible with Einstein’s theory of general relativity (see Notes). There’s also evidence that quasars, extremely luminous objects with active nuclei, have supermassive black holes at their cores.

Since 2015 when the LIGO detectors went into operation, recording gravitational waves such as those emitted by sources like GW190521 has become one additional method for indirectly collecting evidence of black holes. So far, 15 emissions of gravitational waves have been captured by the LIGO-Virgo collaboration: 12 involved the merger of a pair of black holes, two were produced by the junction of neutron stars, and one was caused by the union of a black hole with an as yet undetermined dense object. Some mergers attract attention due to the significant difference in mass between the bodies involved (in general, the objects associated with these events are of similar sizes). “Laurel & Hardy,” was the nickname given to the union of two quite asymmetric black holes, one with 8 and the other with 30 solar masses, recorded last year by gravitational wave detectors. An even more mysterious event was the merger of a black hole of 23 solar masses with a dense, compact object, of about 2.6 solar masses, which astronomers have only identified as either a small black hole or a neutron star. 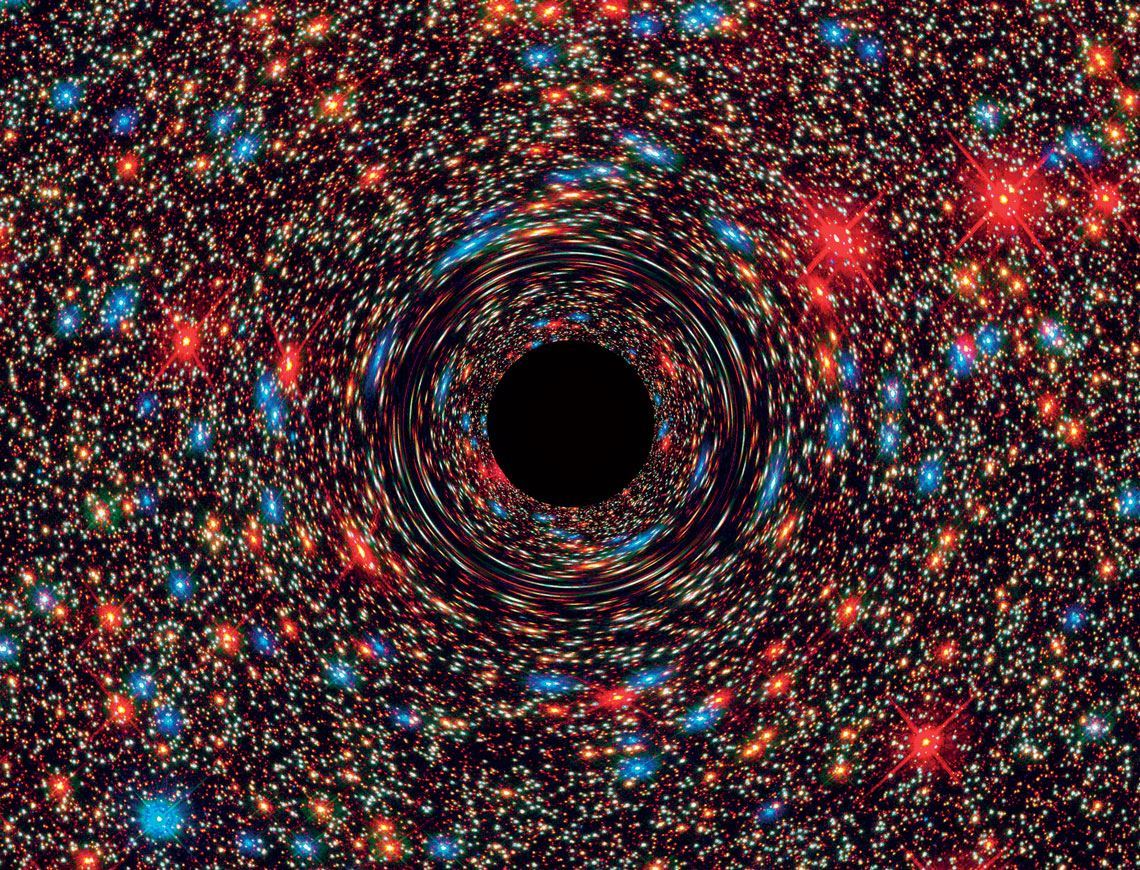 Computer simulation shows how the gravity of a supermassive black hole distorts space around it like a funhouse mirror at an amusement parkNasa / Esa / D. Coe, J. Anderson/R. Van Der Marel (STSCI)

The discovery of more supermassive and intermediate-mass black holes intensifies a cosmological question somewhat along the lines of the chicken and the egg: did galaxies emerge before these enormous matter collectors, as most observations indicate, or is it possible that they appeared later, or even at the same time? The oldest known galaxy, GN-z11, appeared between 300 and 400 million years after the Big Bang, the initial explosion believed to have given rise to the universe. To date the oldest identified black hole was formed 690 million years after the Big Bang. It is located at the center of quasar Ulas J134208.10 and its mass is equivalent to that of 800 million suns. “Quasars and galaxies appeared almost simultaneously at the beginning of the Universe,” notes astrophysicist Thaisa Storchi Bergmann, from the Federal University of Rio Grande do Sul (UFRGS), who studies supermassive black holes. “Perhaps intermediate black holes are the seeds for supermassive black holes. But this is only a hypothesis.”

New discoveries in this area are likely to come with increasing frequency. In the next gravitational-waves observation cycle scheduled to start in mid-2022, the LIGO-Virgo collaboration will incorporate the participation of the Japanese detector KAGRA, which went into operation earlier this year. “With KAGRA, we should observe three potential gravitational-wave-emission events per week,” Aguiar says. “In our last operation cycle, we observed on average only one event per week.” At the beginning of the next decade, the launch of the Laser Interferometer Space Antenna (LISA) by the European Space Agency (ESA), is expected to have the capacity to record gravitational waves emitted by mergers of larger-sized intermediate and supermassive black holes. These events are even more intense than those the LIGO, Virgo, and KAGRA detectors can observe from Earth.