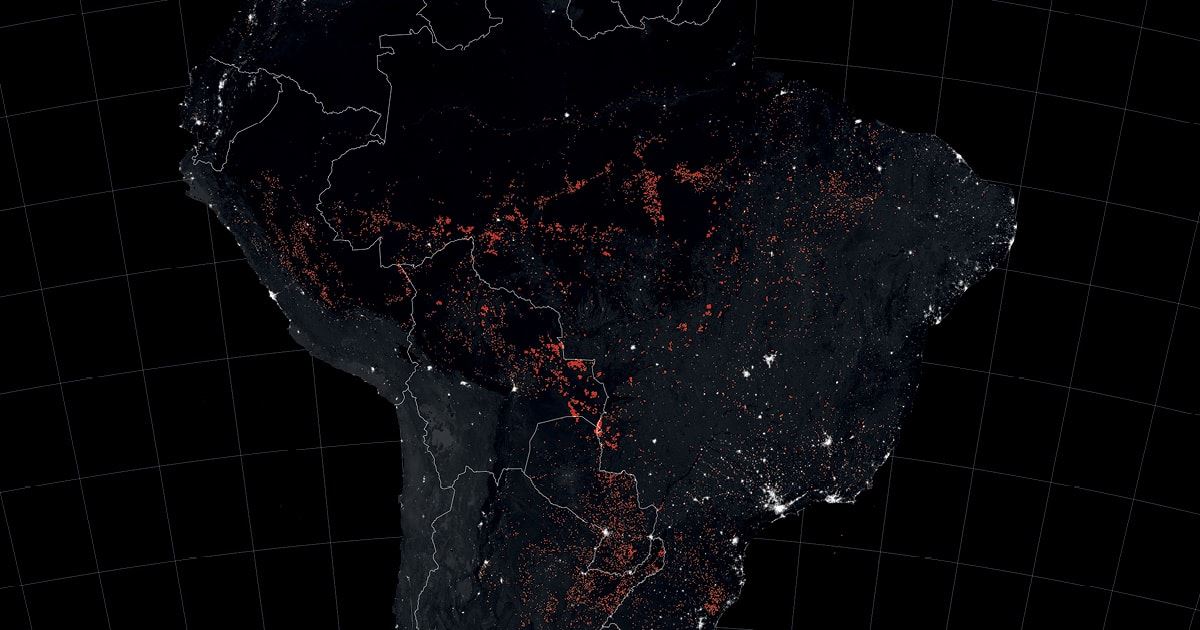 In 2019, hotspots detected by MODIS sensors on the Aqua and Terra satellites between August 15 and 22

Between January and August of this year, two research institutions that monitor forest fires in the Brazilian Amazon recorded the largest number of fires in the biome since 2010. The Queimadas program, run by the Brazilian National Institute for Space Research (INPE), recorded 46,825 hotspots; the Global Fire Emissions Database, a partnership between NASA and various other organizations, listed 90,392 hotspots. In the same period in 2010, which was a particularly dry year, INPE detected 58,476 hotspots and NASA 106,083. Because of the different methods used, the absolute numbers of the two surveys are not equal. The NASA data are always higher than the data obtained by the Brazilian institute, but there is a technical explanation for this.The Aqua satellite passes over the Amazon twice a day, but the INPE only uses data from the overflight that occurs at approximately 2 p.m. (Brasília time), when more fires are active. In the afternoon, the air is warmer than that at other times, increasing the incidence and spread of forest fires. NASA uses information from both Aqua passes (the second pass takes place at dawn) as well as two others by the Terra satellite, the first at 10:30 a.m. and the second at 8:30 p.m. By including data from all overflights by both satellites, a single fire that lasts many hours can end up being counted more than once, which is why the US space agency’s figures are higher.

Technical distinctions aside, both programs have historically identified the same patterns in terms of forest fires in the region. When the number of outbreaks detected by one of the surveys increases or decreases, the same trend is identified by the other program. “NASA’s hotspot count and ours are both excellent indicators of forest fires and allow for temporal and spatial comparisons over intervals greater than 10 days,” says Alberto Setzer, coordinator of the INPE Queimadas program. “However, they should not be considered an absolute measure of the number of fires, the incidence of which is higher than that indicated by the hotspots.”

According to the historical data series produced by INPE since 2003, there were half as many hotspots in the first eight months of this year than there were in January to August 2005 (when more than 90,000 outbreaks were recorded), the Amazon’s worst year on record in terms of forest fires. NASA data also identified 2005 as the year with the most fires in the region, with 170,000 hotspots seen in the first eight months. Although the current number of fires in the Amazon is lower than that during the worst years of the past decade, the recent increase is concerning and could be a sign of worse to come. The number of outbreaks detected between January and August this year was double the amount seen in the same period of 2018, according to both INPE and NASA counts. Historically, more than 50% of all fires, sometimes up to 80%, occur in the last four months of the year. September is usually the driest month in the region and consequently has the most fires, whether of natural origin, due to lightning, or due to the actions of humans.

“Fire is not part of the Amazon’s ecosystem, as it is in the Cerrado [wooded savanna],” explains cartographer Britaldo Soares-Filho, an expert in environmental modeling from the Federal University of Minas Gerais (UFMG). “It is simply a tool for clearing vegetation in the region.” Because it is drier and its vegetation is less enclosed, natural fires are more common in the Cerrado; in the Amazon, the forest is dense, and the climate is wetter. Soares-Filho says that most fires in the Amazon are caused by human activity. “First, the small trees and shrubs of what is known as the understory are cut down and left to dry. This biomass is then set on fire to help bring down the larger trees. In some cases, chainsaws and tractors pulling large chains are also used to remove the trees.” 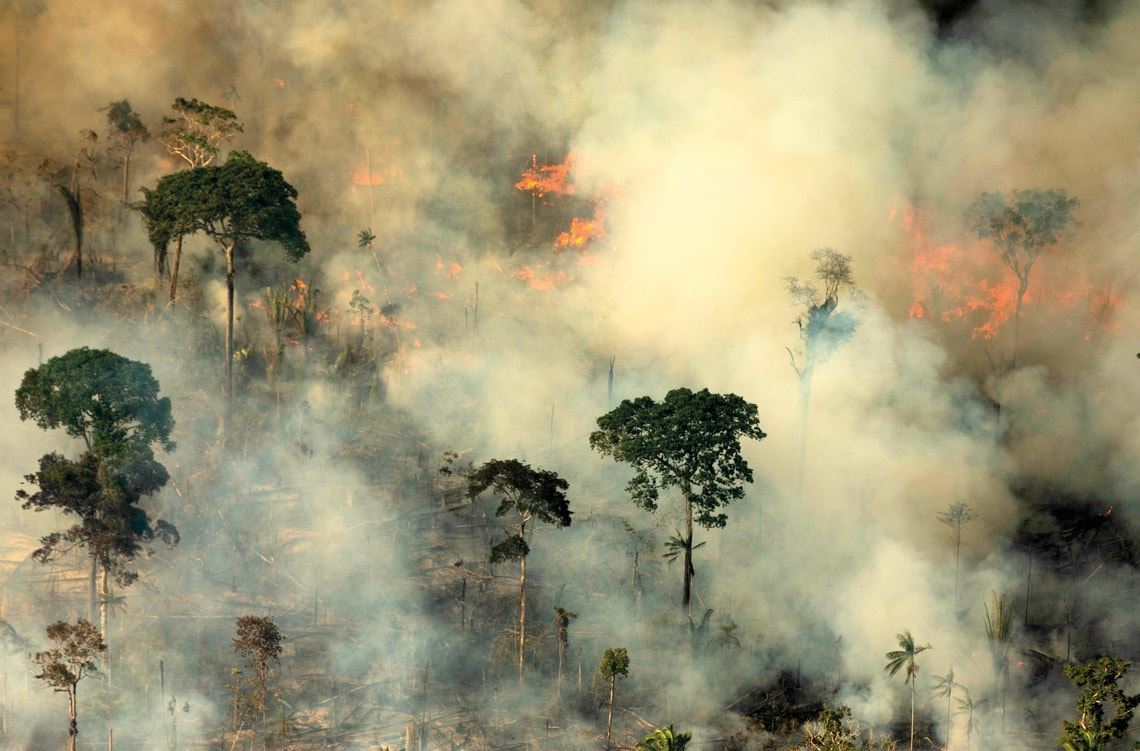 Even when trees are mechanically felled, fire is used to destroy many logs that have no commercial value. Since fire is rarely a natural phenomenon in the Amazon biome (not to be confused with the “Legal Amazon” area, which as well as dense rainforest, includes areas of transition vegetation, the Cerrado, and the Pantanal), researchers state that most wildfires there are started by humans. “Our analysis showed that between January and July this year, the 10 Amazonian municipalities with the most fires also had the highest deforestation rates,” explains ecologist Paulo Moutinho, from the Institute for Environmental Research in the Amazon (IPAM), a nongovernmental organization based in Belém, Pará. At the top of the list is Apuí, a municipality in the state of Amazonas, which recorded 1,754 fires and 151 square kilometers (km2) of deforestation. Altamira, in the state of Pará, had the second highest number of fires (1,630) and the largest deforested area (297 km2).Mapping the overlap between fires and deforestation is not a simple task. Often, fires in the understory are missed by satellites, and larger logs are only burned months after being felled, which can make it difficult to link the fires to deforestation. To monitor these so-called deforestation fires, Moutinho and his colleagues from IPAM and the Federal University of Acre (UFAC) cross-referenced fire records with information on rainfall in the Amazon. Precipitation data were provided by the CHIRPS system of the University of California, Santa Barbara, USA, which combines rainfall information from weather stations with satellite imagery to produce a rainfall distribution record with a resolution of 5 km. The researchers cross-referenced the CHIRPS data with information from the INPE Queimadas program. “We have seen less drought so far this year, but an explosion in the number of hotspots,” says Moutinho.

According to forest engineer Tasso Azevedo, coordinator of the MapBiomas project, an initiative run by the Climate Observatory (an NGO involving 36 Brazilian civil organizations) that maps land use in Brazil, burning and deforestation are not highly planned phenomena. “Since 95% of deforestation is illegal, the level to which it occurs is directly linked to the risk of being caught,” says Azevedo. “If the risk is low, illegal deforestation is worth it. The offenders believe that by clearing and occupying an area, they will be able to legally claim it.”

Since 1986, INPE’s Queimadas program has been mapping Brazilian territory using satellites that detect thermal radiation emitted by fire: electromagnetic waves with peak wavelengths of 3.7–4.1 micrometers. The program currently processes images from nine different satellites and uses three types of optical sensors to generate as many hotspot alerts as possible. Useful for monitoring forest fires, the initiative is also capable of identifying areas where human activities are creating large clusters of outbreaks. In addition to deforestation fires and burns to clear areas for pasture or agriculture, the system also detects wildfires caused by burning sugarcane bagasse and urban fires.

The instruments on the satellites are capable of identifying hotspots as small as 1 meter wide and 30 meters long. Currently, three generations of sensors are used for this purpose: the older AVHRRs, the newer MODIS, and the most modern, the VIIRS. The last one, which can be found on the United States National Oceanic and Atmospheric Administration’s (NOAA) Suomi NPP and NOAA-20 satellites, can detect 10 times as many hotspots as the MODIS sensors on NASA’s Aqua and Terra satellites. The performance of the sensors is affected by rain clouds but not clouds of smoke from fires.The Global Fire Emissions Database records hotspots in the Amazon based on data from the Terra and Aqua satellites. In addition to monitoring the location of hotspots, the satellites also record their intensity. Measured as FRP (Fire Radiative Power), this variable had a high average in July and increased even more in August. “Radiative power is an instant measure of the energy emitted by a fire,” explains Niels Andela, coordinator of the program. “Deforestation fires tend to emit more energy because they usually involve burning a large amount of wood with highly concentrated biomass. It’s different from a grass fire, which burns less fuel.”

If it were possible to observe the hotspots continuously with no interruptions, the FRP would be able to determine the exact amount of biomass incinerated. However, this would require a continuous stream of data generated by geostationary satellites that always observe the same region of Earth, as well as data at a better resolution than current instruments provide. Polar-orbiting atmospheric satellites such as Aqua and Terra are not suited to such an operation. “Although they only provide a snapshot, current FRP measurements [obtained by Aqua and Terra] are still strongly correlated with the amount of biomass burnt,” says Andela. “This year’s average numbers are relatively high and indicate fires associated with deforestation.”