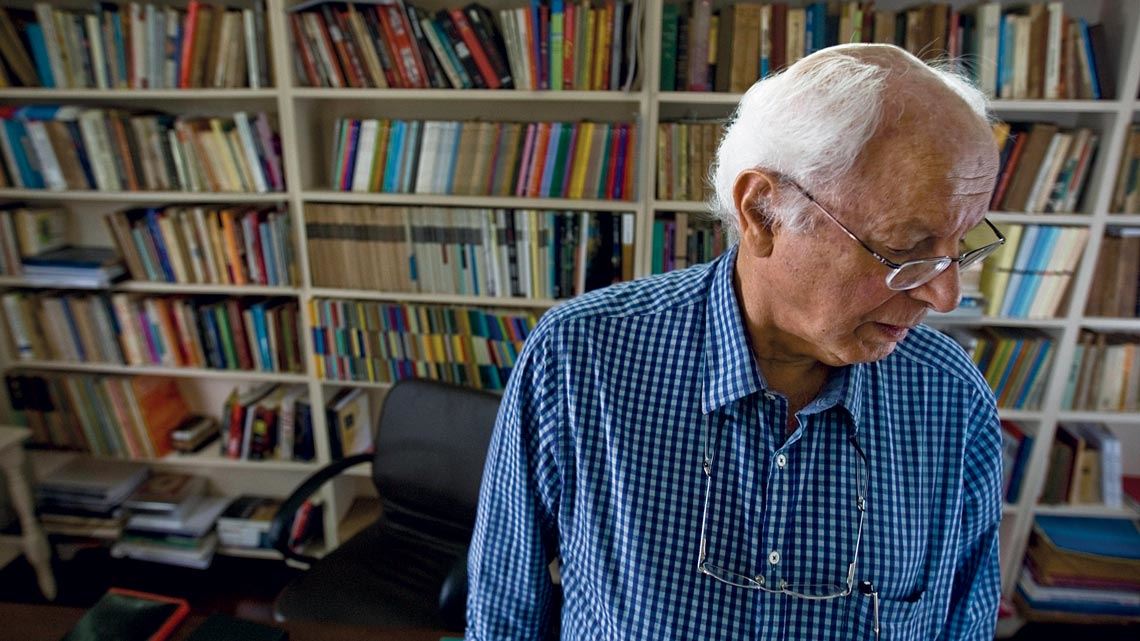 Rodrigues during an interview in April 2011, at his home in São Paulo

Unionism, industrial labor relations, political parties and political representation in Brazil were some of the primary research interests of social scientist Leôncio Martins Rodrigues, 87, who died Monday, May 3, in São Paulo. In recognition of a notably prolific academic career that began in the 1960s at the University of São Paulo (USP), he was the recipient of a Florestan Fernandes Award from the Brazilian Society of Sociology in 2009, and an Antônio Flávio Pierucci Academic Excellence Award from the Brazilian Association of Graduate Studies in Political Science (ANPOCS), in 2015. “He was a twofold pioneer in Brazil,” says André Botelho, a professor in the Department of Sociology at the Federal University of Rio de Janeiro (UFRJ) and chairman of ANPOCS. “First, through his seminal labor-union research in the 1960s that helped to consolidate the field of labor sociology in Brazil. And years later, in the 1980s, he was among the first to research political parties at a time when this field—now one of the most important research areas in political science in Brazil—was just beginning to take shape.”

Rodrigues was born in 1934 in São Paulo, where he completed a degree in social science at the then School of Philosophy, Science, and Languages and Literature (FFCL) at USP. In an interview in 2008 at the Fundação Getulio Vargas Center for Research and Documentation of Contemporary Brazilian History (CPDOC), he recounted how his youthful Trotskyist activism had led him to drop out of high school in his younger years, delaying his admission to university to the age of 25. He described how the idea to study social sciences had been suggested to him by notable anthropologist Ruth Cardoso (1930–2008), his history teacher at the Fernão Dias Paes State High School. The two would later work together at the Center for Labor Studies under the Office for Labor, a São Paulo State government agency. “We were having a conversation and she said: ‘Why don’t you study social science?’ I didn’t quite know what it was. When she explained to me what social science was about, I said: “That’s exactly what I want to do!’” he recalled in his interview.

He later became a professor of sociology and political science at USP. “He was very receptive, generous and approachable to his students, often going out with us for a beer,” recalls sociologist Sérgio Miceli, a professor at FFLCH-USP who pursued his master’s and doctoral degrees under Rodrigues. “He was also a great host. During the military dictatorship, under the threat of political persecution, his home in Pinheiros became a meeting place for intellectuals. Rodrigues came to many people’s aid during the military regime. When his friend, professor Régis de Castro Andrade [1938–2002], was arrested for political reasons, he offered to help his family.”

During that period, Rodrigues played a central role in organizing and founding two important research organizations: the Brazilian Center for Analysis and Planning (CEBRAP), which he cofounded in 1969 with Fernando Henrique Cardoso, Cândido Procópio Ferreira de Camargo (1922–1987), Paul Singer (1932–2018), José Arthur Giannotti, Elza Berquó and other researchers; and the Center for Contemporary Cultural Studies (CEDEC), founded in 1976. He also participated in founding the Center for Industrial and Labor Sociology (CESIT) alongside Florestan Fernandes and Cardoso at USP. Over time, he abandoned his left-leaning views in favor of liberalism. “He always respected opposing points of view,” says sociologist Glauco Arbix, a professor at FFLCH-USP who completed his PhD under Rodrigues. “But he was demanding in requiring that proposed ideas were robust, well substantiated and well argued.”

Rodrigues also made an important contribution to organizing and strengthening the Humanities and Social Science department at FAPESP, and served as the first deputy scientific coordinator at the Foundation in 1989. “At a time when peer-review culture was still incipient in the humanities, Rodrigues played a central role in introducing peer review standards with greater methodological rigor, as well as greater academic diversification,” recalls Luiz Henrique Lopes dos Santos, who served as a member of the Humanities and Social Science department at FAPESP under Rodrigues.

In the 1990s he was nominated by Brazil’s then president, Fernando Henrique Cardoso, as a member of the Board of Directors of the International Labor Organization (ILO). Around the same time, he wrote the book Destino do sindicalismo (The future of unionism; Centro Edelstein de Pesquisas Sociais, 1999), about the future of labor unions and labor relations. “In his book, he argued that labor unions’ political influence was waning due to a number of reasons, including economic globalization and the adoption of anti-union policies on several continents. Though his predictions would ultimately prove correct, his book initially drew criticism because the Brazilian union movement was then still a force to reckon with, and just a few years later, in 2002, Luiz Inácio Lula da Silva, a former factory worker and union leader, would be elected president of Brazil,” notes sociologist Ruy Braga, a professor at FFLCH-USP.

After retiring at USP in 1985, he was hired as a professor at the University of Campinas (UNICAMP), where he served until 2003. “He came here with other big academic names to organize the university’s first doctoral program in social science. He always enjoyed teaching,” notes Rachel Meneguello, a professor in the Department of Political Science at UNICAMP’s Institute of Philosophy and Human Sciences (IFCH). It was during this period that his interest was drawn to the subject of political parties and political representation in Brazil.

Among the products of his newfound interest were books like Quem é quem na Constituinte (Who is who in the Constituent Assembly; Editora OESP-Maltese, 1987), sponsored by the Brazilian newspaper Jornal da Tarde, in which he describes the ideological, social and cultural biographies of the congressmen who would write the Federal Constitution of 1988, after 21 years of military dictatorship (1964–1985). With more than 52% of them describing themselves as being on the left or center-left, Martins Rodrigues coined the expression direita envergonhada (literally, the “ashamed right”) to refer to “those congressmen who wished to distance themselves from the dictatorship during Brazil’s return to democracy,” explains Meneguello. In his two last books, Mudanças na classe política brasileira (Shifts in Brazilian politics; Publifolha, 2006) and Pobres e ricos na luta pelo poder – Novas elites na política brasileira (The poor and the rich in the struggle for power—The new elites in Brazilian politics; Topbooks, 2014), he analyzed the profiles of members of the House of Representatives elected in 1998, 2002 and, later, in 2010. He describe the House as becoming incrementally more populist. “But not necessarily better,” notes Meneguello, who concludes by adding: “Rodrigues was a prominent advocate of empirical research, and his analytical approaches influenced several generations of researchers.”

A member of the Brazilian Academy of Science (ABC) and a recipient of the title of Commander of the National Order of Scientific Merit, in 2001, Leôncio Martins Rodrigues is survived by his partner, political scientist Maria Tereza Sadek, and his two children, Luciana and Daniel, from his marriage to psychologist Arakcy Martins Rodrigues (1936–2000).