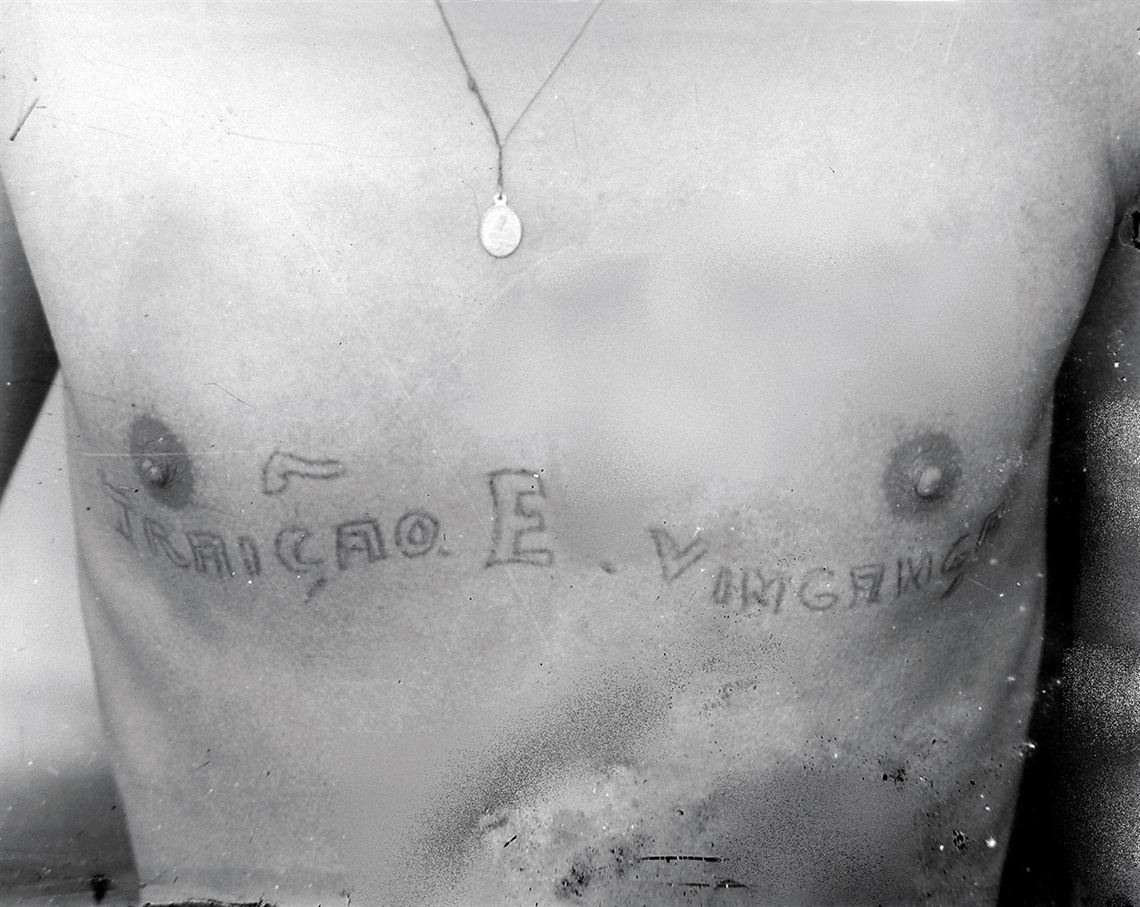 Image from the São Paulo Penitentiary Museum archive, which contains 2,600 photographs of tattoos of inmates who passed through the São Paulo prison system in the 1920s and 1930s

For many years, tattoos were considered a symbol of the marginalized, but today they are present across all social classes. European tattoo culture began to spread around the world in the fifteenth century, with sailors and adventurers on sea expeditions marking their bodies with techniques improvised on ships and in the ports where they docked. In Brazil, although various indigenous peoples historically tattooed themselves long before the arrival of European colonizers, the practice of recording images on the skin took longer to spread among the general population. It was in the nineteenth century, with navigators not only from Europe, but also North America and the Middle East, who all typically adopted the practice as a way of expressing feelings, religious identity, or nationality, that the custom began to take off.

Initially studied by criminologists, in recent decades tattooing has been investigated in Brazil by researchers from other fields. Research by historian Silvana Jeha, for example, funded by the Brazilian National Library, has reconstructed the history of tattooing in urban Brazil between the nineteenth century and the 1970s, when it began to dissociate itself from its image of marginality. By surveying a range of document sources, the study identified the profiles of tattooed social groups, seeking to understand what the custom means to each group. It took five years to complete and was published in the book Uma história da tatuagem no Brasil: Do século XIX à década de 1970 (A history of tattooing in Brazil: From the nineteenth century to the 1970s), which includes many iconic images.

“Until the 1960s, there were no establishments dedicated to tattooing. People tattooed each other wherever they could: on ships, in ports, in the street, bars, places of religious worship, military barracks, and prisons—sometimes using needles, but also with improvised objects such as thorns, shards of glass, and knives,” says Jeha, who is now carrying out postdoctoral research on the Psychoanalytic Theory program at the Institute of Psychology at the Federal University of Rio de Janeiro (UFRJ). The material used to color the images also varied widely. “Pigments were made from grease, the indigo plant, soot from cigarettes and kerosene, black aniline, charcoal, and more,” reports the historian. Jeha’s research looked at articles from the National Library’s newspaper archive, announcements of slave escapes, literary references, and medical theses on the topic, as well as documents from the São Paulo Penitentiary Museum, located on the grounds of the former Carandiru Prison Complex. The museum’s archive contains 2,600 photographs of the tattoos of detainees who passed through the São Paulo prison system in the 1920s and 1930s. The images were stored in files by the Medicine and Criminology Division of the São Paulo State Penitentiary to study the profiles of criminals, accompanied by interviews of the inmates who did the tattoos. “Since many people moved to São Paulo from elsewhere in Brazil and worldwide at the time, the collection provides a comprehensive sample of tattoos from different places,” says the historian. 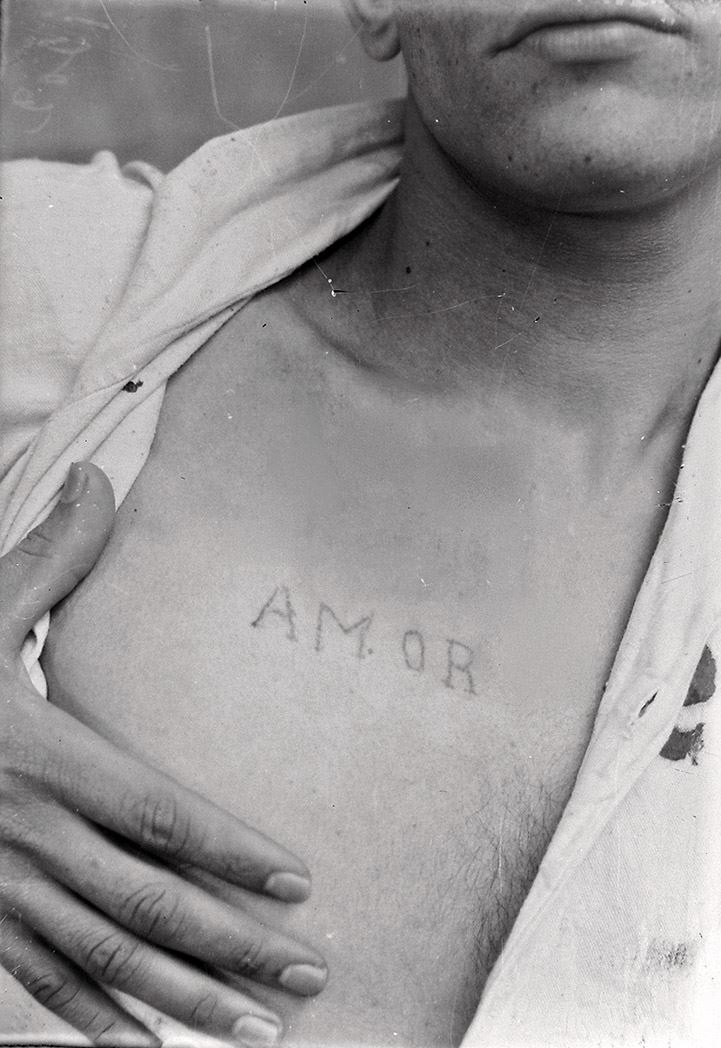 Drawings on the skin were made with improvised materials in informal locations, such as ports or military barracks. The practice was professionalized in Brazil in the 1960sSão Paulo Penitentiary Museum Archive

In 2018 and 2019, British researchers also studied the profiles of 58,000 tattooed convicts, using data-mining techniques to understand the historical significance of tattooing. Robert Shoemaker, an expert on eighteenth century British history from the University of Sheffield, and Zoe Alker, from the Department of Sociology, Social Policy and Criminology at the University of Liverpool, analyzed information from the Panopticon online platform, which holds data on 90,000 criminals arrested in Great Britain and Australia between 1780 and 1925 and sentenced by the Old Bailey (the central criminal court of England and Wales). According to a text published by the authors on the Panopticon website, tattoos were described by penal institutions as a means of identifying and tracking fugitives or repeat offenders. One of the study’s conclusions is that rather than representing criminal affiliations, as claimed by sociologists and criminologists such as Henry Mayhew (1812–1887), from the UK, and Cesare Lombroso (1835–1909), from Italy, the tattoos express common identities and sentiments of the working classes. The research endeavored to reveal aspects of the lives of ordinary people who left no written records, classifying the tattoos by four categories: design, words or letters, body part/area, and subject covered—which can range from national identity to religion. Between 1821 and 1920, most tattoos were on the arms, commonly depicting naval themes, religious symbols, declarations of love, and names and initials. Despite being most popular among the working classes, the authors found that tattooing as a phenomenon was on the rise among other social sectors of Victorian England, even among members of royalty.

Jeha notes that sailors were probably most responsible for spreading tattoo culture at port cities, through maritime iconography such as anchors and fish, love symbols such as hearts and the initials of lovers, and religious figures. At the turn of the twentieth century, the historian found that soldiers from around the world were often tattooed at army barracks, where they were confined for long periods. Both sailors and soldiers tattooed themselves to ensure their bodies would be identifiable if they died. Jeha notes that designs considered patriotic were common in the military, such as flags and coats of arms.

The word tattoo first came into use after the travel journals of British Navy captain James Cook (1728–1779) were published. Cook led scientific expeditions by the Royal Society of London across the Pacific Ocean. “Captain Cook’s trips are a milestone because they resulted in the first documentary records on tattooing,” says sociologist Beatriz Patriota, a PhD student at the Center for Education and Human Sciences (CECH) of the Federal University of São Carlos (UFSCar) who researches the processes through which tattoos have transformed into a form of art. According to Patriota, when Cook published the memoirs of his trips to the South Sea Islands in French Polynesia in 1769, he used the word “tatau” for the first time, an onomatopoeic word referring to the rhythmic sound tattooing made at the time. “Later, the term gave rise to the word tattoo,” she says. “Sailors lived on the margins of society and were viewed as foreigners wherever they went. Tattooing was seen as a way of developing a sense of belonging,” Patriota explains. 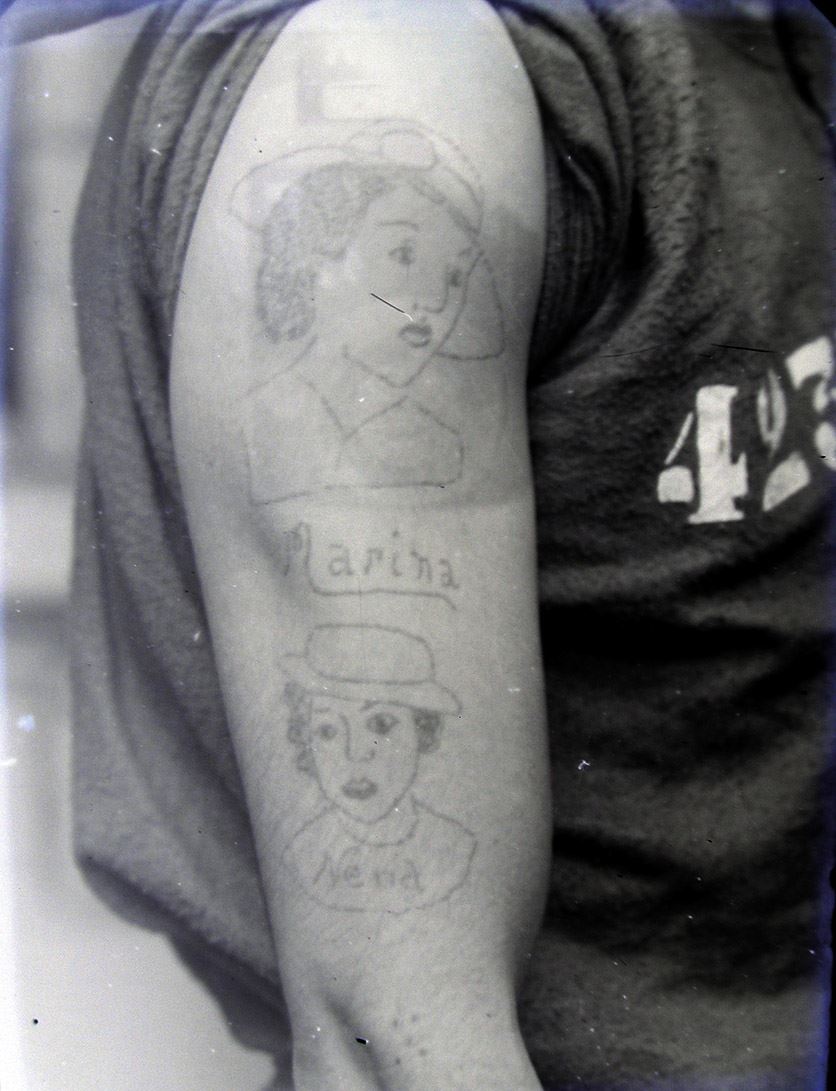 Along with religious symbols, the tattoos most frequently identified in research by a Brazilian historian were names and faces of womenSão Paulo Penitentiary Museum Archive

In the nineteenth century, the element of marginality was reinforced by the appearance of tattooed individuals as attractions at variety shows and amusement parks in Europe, the USA, and even Brazil. “These events increased the popularity of tattoo culture, but they also helped to spread prejudice,” says Patriota. The situation began to change in 1891, when American tattoo artist Samuel O’Reilly (1854–1909) patented the first electric tattoo machine. According to the sociologist, this was a major milestone in the process of tattoos becoming seen as pieces of art and professionalization of the practice, which started to lose its improvised nature.

Through her research, Jeha found that since at least the end of the nineteenth century, the crime pages of Brazilian newspapers linked tattoos to criminality, reflecting reports by police officers and coroners. According to the historian, the relationship between tattooing and the crime world stems from its association with the marginalized groups that helped spread the custom across the country. The connection lasted for more than a century. Social psychologist Richard de Oliveira, a researcher at the Art Psychology Laboratory at the University of São Paulo’s Institute of Psychology (IP-USP), notes that research in this field, even today, tends to associate tattooing with psychopathology. “Studies that approach tattooing as an aesthetic and social phenomenon, as I understand the practice, are still a minority in the area,” he affirms.

Another social group linked to tattooing in Brazil at the end of the nineteenth century were enslaved Africans, many of whom arrived with marks on their skin. “My study included analyses of the tattoos of people living in Brazilian cities, which includes slaves from that time,” explains Jeha. She investigated 4,000 escaped slave bulletins in the National Library and discovered that descriptions of tattoos or scarifications (deliberate scars that do not incorporate any pigment) were used to help identify fugitives.

In the final decades of the nineteenth century, other tattoo cultures arrived in Brazil, brought by waves of immigrants from Europe, the Middle East, and Japan. When studying the Penitentiary Museum’s collection, Jeha found that many immigrants who spent time in São Paulo prisons were already tattooed when they entered the system, contrary to the belief that most tattoos are done in prison. “There was a tattoo culture in the Middle East. Many Arabs from what is now Syria and Lebanon, for example, had pictures and figurative motifs on their bodies, both ethnic and religious in nature,” she says. According to Jeha, religious motifs were tattooed by some to affirm their status as Christians in regions where the majority of the population was Muslim. “Several Brazilian writers portrayed the figure of the tattooed Arab foreigner, such as in the short story A volta do marido pródigo (The return of the prodigal husband) by Guimarães Rosa [1908–1967], or in the poem Os turcos (The Turks), by Carlos Drummond de Andrade [1902–1987],” she highlights. 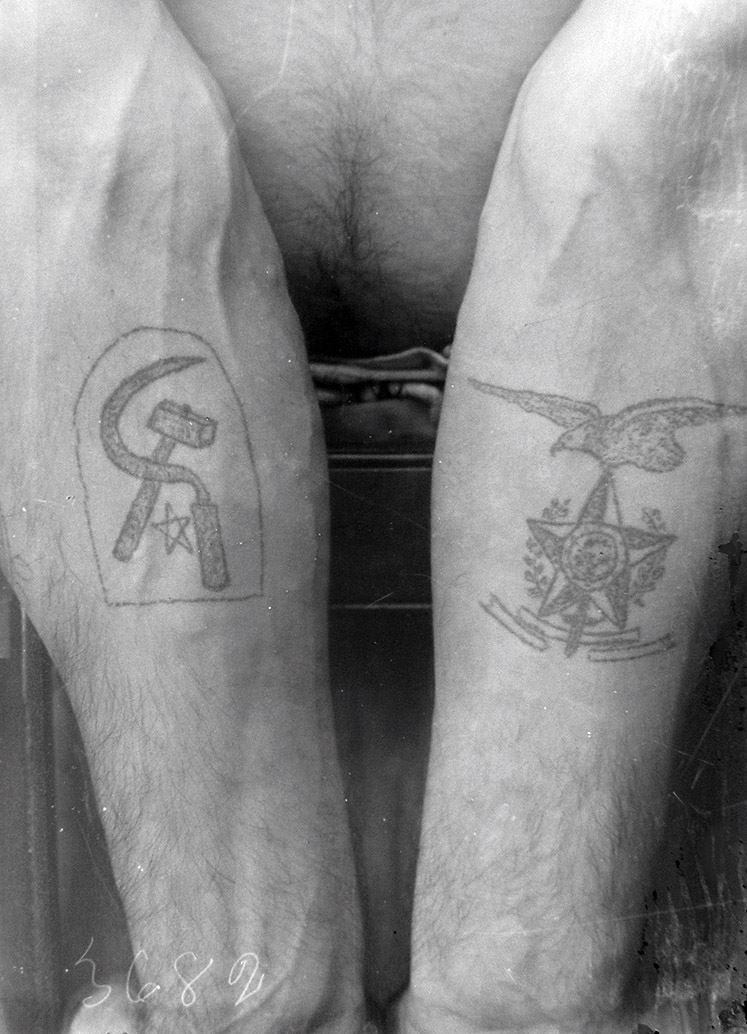 While Samuel O’Reilly may have started the process of making tattooing a legitimate profession in 1891, paving the way for its future artistic status, the first professional tattoo artist to open a studio and use electric machines in Brazil was Danish sailor Knud Gregersen (1928–1983), known as Tattoo Lucky, who tattooed other sailors and regular visitors to the port. “He arrived in Brazil in 1959 and worked mainly in the Santos port region. He represents the link between the era of marginality and the explosion of popularity across all social strata, which began in the 1970s,” explains Jeha.

According to the historian, until the 1960s, tattoos were usually hidden or covered by clothing. From the 1970s onward, this began to change, with various urban cultures such as rockers, punks, hippies, and surfers getting tattoos as symbols of rebellion. “The Americans called this phenomenon the ‘tattoo revival’,” she says. Today, tattoo studios are regulated, follow strict hygiene rules, and study new techniques and technologies to improve their work. This professionalization and popularization process has had an impact on the iconography, observes João Batista Freitas Cardoso, a pop culture researcher who teaches on the Innovation in Public Communication master’s course at the Municipal University of São Caetano do Sul (USCS). In the past, the iconography was centered on classic elements such as anchors and hearts, but as tattooing grew in popularity, it started to include elements of the so-called geek culture, such as comic book characters. Sailor tattoos of the past also continue to influence current iconography through reinterpretations in the style of contemporary tattoo artists.