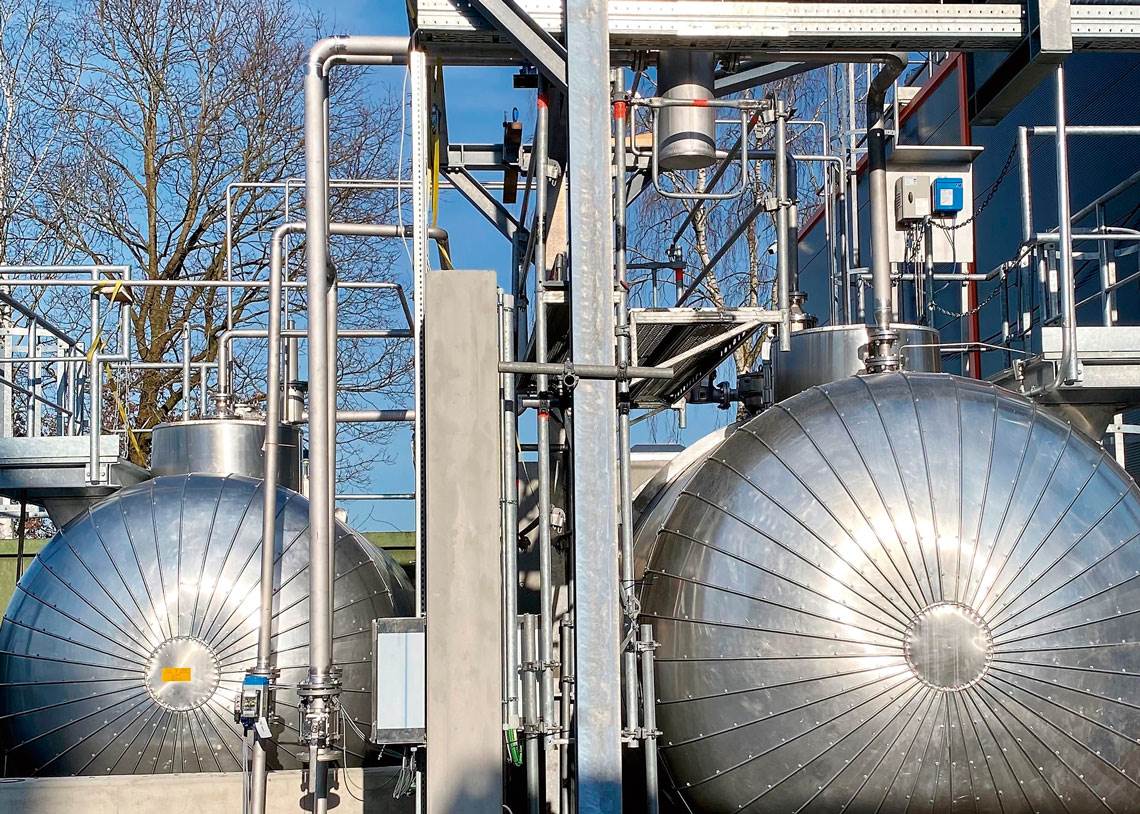 Several research centers around the world, including in Brazil, are searching for new technologies capable of converting carbon dioxide (CO2) into sustainable aviation fuel (SAF). Known as power-to-liquid (PtL), the process creates a liquid hydrocarbon fuel from electricity, water, and CO2, which can be captured from the atmosphere, chimneys, industry, and oil production or refining processes. The carbon dioxide is converted into carbon monoxide, which reacts with sustainable hydrogen in Fischer-Tropsch (FT) reactors used to convert gases into fuels.

For the operation to be environmentally sustainable, the hydrogen needs to be processed in electrolyzers powered by renewable energy, such as wind or solar power. The result is known as green hydrogen, a fuel with a high calorific value almost three times higher than diesel, but which is not yet being produced on a large scale (see Pesquisa FAPESP issue nº 314).

The first two PtL SAF pilot plants began operations in 2021. The first, operated by Solarbelt Atmosfair in Germany, has the capacity to produce roughly one ton of synthetic aviation kerosene per day. The second pilot plant is located in Montreal, Canada, built by the SAF+ Consortium, which comprises 10 institutions, including the aerospace company Airbus. According to the consortium, the commercial project will be able to produce 30 million liters of synthetic kerosene per day in 2025, with a carbon footprint 80% smaller than fossil-fuel kerosene.

There are several systems available that can be used to produce PtL fuels. The most promising approach uses Fischer-Tropsch (FT) reactors, conceived in Germany in 1923 by chemists Franz Fischer and Hans Tropsch to convert coal into synthetic fuel. Modern FT reactors are large, capable of processing millions of liters per year.

One challenge faced by global research centers is how to make it viable to produce PtL fuel in small FT reactors—with capacities in the hundreds of thousands of liters per year—which would enable decentralized production in plants near airports. This would reduce the costs and greenhouse gas emissions of logistical systems.

“The development of PtL SAFs in decentralized plants has reached its ‘valley of death,’” says environmental engineer Tina Maria Ziegler, director of Promoting Alternative Fuels without Climate Impacts (ProQR), in reference to the gap between research and the market. “We have to show that it is possible to move beyond the stage of technological proof by applied research and into the commercial stage. We will need several demonstration plants, outside the labs, continuously producing more than 500 liters of SAF per day.” The ProQR project is part of a partnership between the Department of Sustainable Development at the German Agency for International Cooperation (GIZ) and Brazil’s Ministry of Science, Technology, and Innovation (MCTI).

It is currently supporting the implementation of three laboratory-scale PtL SAF projects in Brazil. The most advanced is the result of a partnership between the GIZ and the Institute for Innovation in Renewable Energies managed by the National Service for Industrial Training (SENAI) in Natal, Rio Grande do Norte.

Brazilian technology
Another Brazilian initiative is based on a partnership between the Sino-Spanish oil company Repsol Sinopec Brasil, Brazilian hydrogen technology company Hytron, which belongs to the German group NEA, the SENAI Institute for Innovation in Biosynthetics and Fibers in Rio de Janeiro, and the Chemical Engineering Department of the Polytechnic School at the University of São Paulo (Poli-USP).

Named CO2Chem, the project is funded by German research institute Fraunhofer and the Research Center for Innovation in Greenhouse Gases (RCGI), one of the Engineering Research Centers funded by FAPESP. Its objective is to produce sustainable fuels using CO2 captured from a range of sources, such as offshore oil exploration and production activities. A pilot plant is scheduled to start operating this year.

According to chemical engineer Rita Maria de Brito Alves, coordinator of the initiative at the RCGI, the Poli-USP team will be responsible for conducting research and developing new catalysts—chemical substances to be used in the reverse water gas shift reaction. This reaction occurs in the step prior to FT synthesis, when CO2 reacts with hydrogen to produce carbon monoxide, forming the gas that will be used in the FT reactor.

“No commercial catalyst for this reaction exists. We are looking for active, stable, efficient catalysts that allow the reaction to occur at temperatures lower than the current standard of 700 to 800 degrees Celsius,” says Alves. These catalysts are under development at USP.

Poli-USP is also the Brazilian representative on the 4AirCRAFT Air Carbon Recycling for Aviation Fuel Technology project, which includes six other research institutions from Europe and Japan. The project is funded by the European Union’s Horizon 2020 research and innovation program.

The objective is to develop an SAF by directly converting CO2 into fuel in an integrated multicatalytic process. As explained by Alves, who took part in the research, the traditional pathway for producing fuels from CO2 involves several sequential steps in different reactors. The 4AirCRAFT team is aiming to develop a process in which the reactions all occur in a single cascade reactor, driven by the sequential actions of several catalysts with specific characteristics. The cascade reactor and the catalysts are the target of the project, which started in 2021 and is set to last for three years.