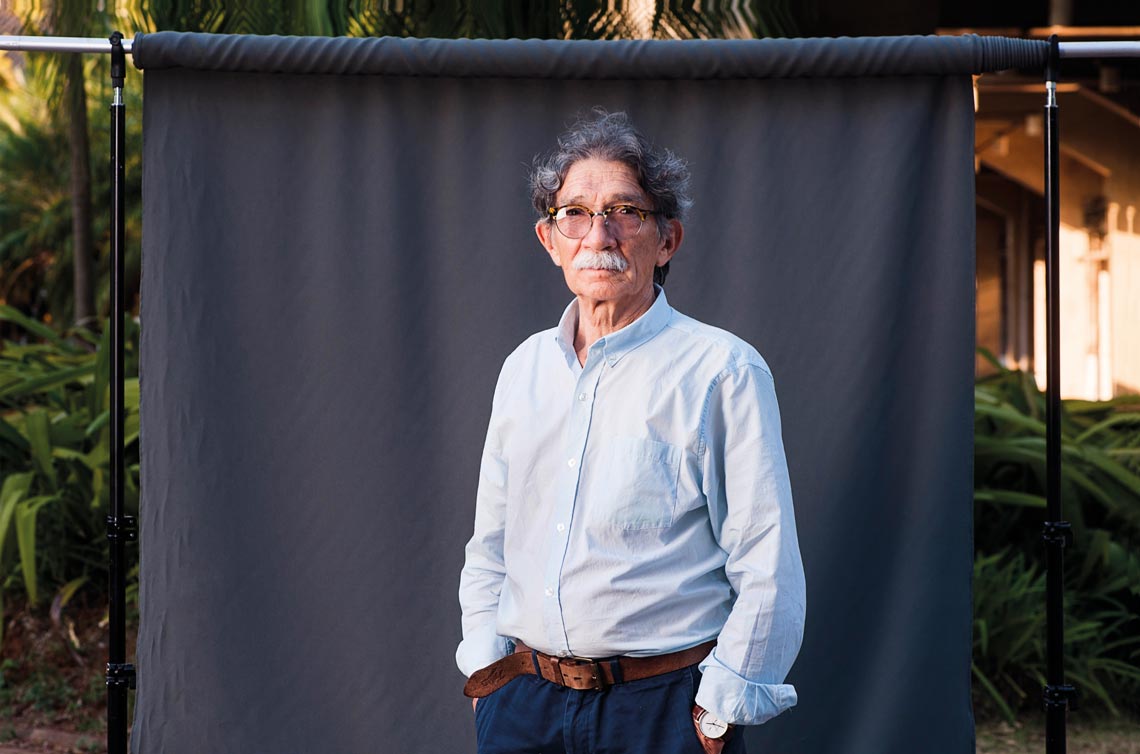 A chemist by training, Lauro Barata used his roots in Pará—where the use of plant products was central to daily life—to develop his research into the properties of substances from Amazonian trees. He was a professor at the University of Campinas (UNICAMP) for about 40 years. In 2011, he returned to Pará to help establish the Federal University of Western Pará (UFOPA), in Santarém.

His connection with the perfumery industry came from his consultancy work for the French company Chanel—whose perfume Chanel No. 5 had its production threatened by the environmental protection of rosewood, a tree whose oil is central to the perfume’s scent. He started attending perfumery conferences and working in partnership with the cosmetics industry. In 2018, this trajectory earned him a medal awarded by The International Federation of Essential Oils and Aroma Trades (IFEAT).

Guided by his chemical knowledge, his focus is currently on forming connections between the Amazonian population and industry, seeking economic results for the wealth of the forest.

What led you back to Pará?
I’m a missionary; I’m there because I want to help change things. I’m part of postgraduate programs, thanks to a Senior Visiting Professor scholarship from CAPES [Brazilian Federal Agency for Support and Evaluation of Graduate Education].

Do you provide consultancy services?
Yes, often for free. A few weeks ago, an Amazonian company that extracts priprioca [Cyperus articulatus] for Natura and other companies came to me because they had no idea what to do with a byproduct. I suggested that they make soap or other products, but they were only interested in discarding the tons of liquid waste—aromatic waters (hydrolates) that can’t be dumped directly into the river. I suggested techniques for cleaning this water. I could have charged them for this work, but I prefer to establish a good relationship with them. I asked them for 40 liters of the product, which I am studying for the purposes of product development. I also help make these connections because I know a lot of business people. I share information on how to plant, grow, and develop a good business using Amazonian plants.

How did you start working with rosewood?
I did some consultancy work for Chanel in 2000; they used rosewood oil in their fragrances. They were being accused of destroying the Amazon rainforest by a federation of French NGOs [Nongovernmental Organizations] who were promising a boycott on Christmas. I visited the Amazon with a Chanel representative and interviewed people from universities, from IBAMA [Brazilian Institute of the Environment and Renewable Natural Resources], from government, as well as rosewood oil producers. I worked on it for a month and wrote reports in partnership with an economist and [the ecologist] Tasso Azevedo, from IMAFLORA—an NGO from Piracicaba (São Paulo State). We predicted five future scenarios. One of them was growing rosewood to extract oil from the leaves, based on a 1950s project by Otto Gottlieb [a Czech chemist and a naturalized Brazilian citizen, 1920–2011], in which he described the chemical composition of the oil. When I compared its composition to that of the wood oil, I realized they were nearly identical. Chanel was able to avoid the boycott. The idea of growing rosewood persisted, so I signed up for the annual Samuel Benchimol award, and I was granted US$100,000 from the Banco da Amazônia to fund the research. One of my students, Eduardo Mattoso, collected leaves and extracted oil from plants at 50 sites in Belém, Santarém, and Manaus. We confirmed what had been clear half a century earlier, and observed that five years were enough to plant, prune, and extract oil from the rosewood leaves. After an adjustment through distillation, it yielded a similar oil: that’s what the industry, including Chanel, does today. 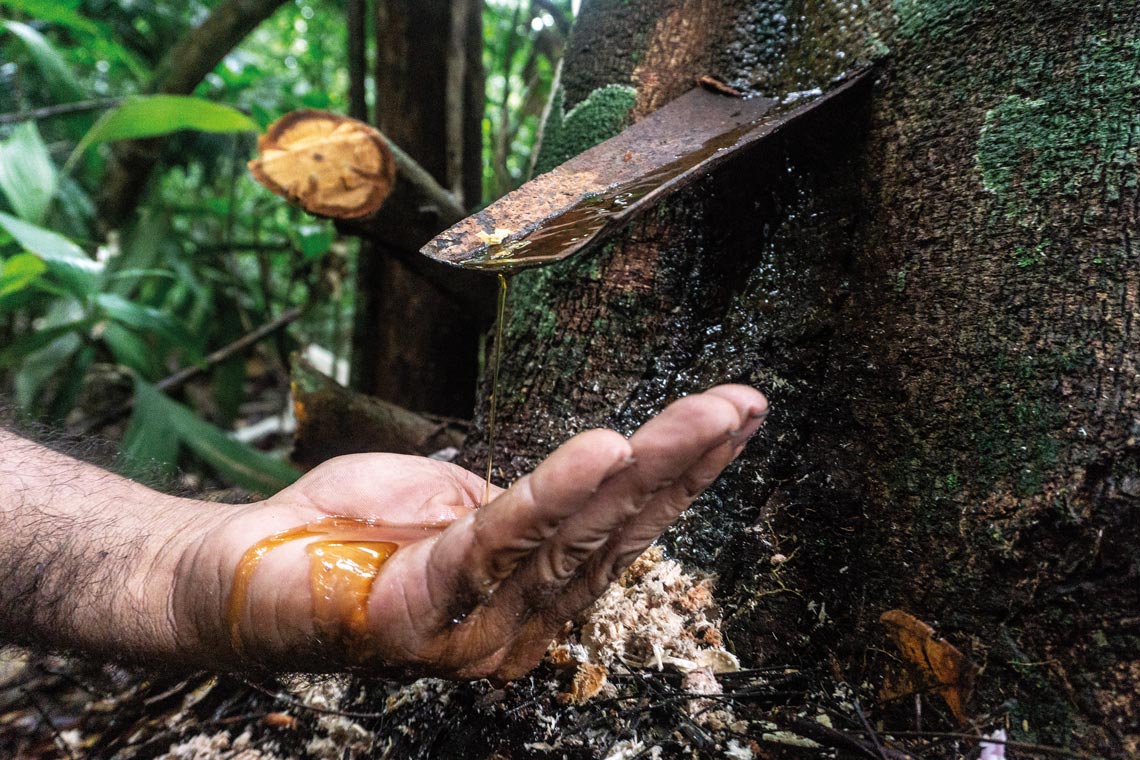 Copaiba oil extraction in the Riozinho do Anfrísio region, in the municipality of Altamira, Pará Léo Ramos Chaves

Did rosewood become a protected species after that?
Yes. IBAMA asked me in 2010 to add rosewood to the protected species list and I suggested that exporter Ilko Minev, from Manaus, be part of the commission. It would be inappropriate to have only scientists and government representatives discussing an economic issue. In 2011, rosewood was added to Appendix II of the Convention on International Trade in Endangered Species of Wild Fauna and Flora, CITES, which allows oil extraction to continue from cultivated plants. If it had been added to Appendix I, it would have been impossible to continue extraction. With this simple technique, I helped save rosewood from extinction.

Does this type of activity generate many jobs for the local population?
Currently, yes. Natura, today a US$10 billion company, is headquartered about 50 kilometers from Belém. It produces 200 million soaps a year, solely from natural botanical products. Their industrial labor force is not very extensive, but they buy their raw materials from local producers, thus generating jobs in the communities. Within Natura there is a group of lawyers, anthropologists, and biologists who are devoted to this relationship. Their catalog includes crabwood, copaiba, ucuuba, murumuru, cupuaçu, breu, priprioca… two dozen natural products. For each of them, there are thousands of people growing a product that used to be nearly worthless. This adds value to the standing forest and the scientific research involving these products. The priprioca scent resulted from a 1996 project developed in my laboratory at UNICAMP. It ended up becoming a product.

Are there any other businesses in this field?
Some still exist, such as Beraca and Amazonoil. I have a connection with a municipality called Prainha, near the Guianas and whose population is very poor. They came looking for me, accompanied by a lawyer. I suggested that they form a cooperative. I provide this type of consultancy work for free; I want them to get organized. Once they have the product, I can put them in touch with companies. Thanks to Natura, thousands and thousands of people earn something from this type of activity, even if it is not their only source of income.

What do you make of such appreciation of Amazonian products going forward?
There is a movement to use the products not only for cosmetics but also for food, pharmaceuticals, plastics, polymers. That’s what Carlos Nobre [retired climatologist from the National Institute for Space Research] proposes: Amazon 4.0. I did some consultancy work for him about production chains of Amazon resources, such as Brazil nuts, acai, cupuaçu, crabwood. He wants to know how climate change impacts the production chain of these resources in the affected regions. The solution is to invest in technology. Without it, we extract rubber but don’t produce car tires. These products we are discussing are commodities. If we want to lift the Amazon out of poverty, it is essential that academia be an ally for business.