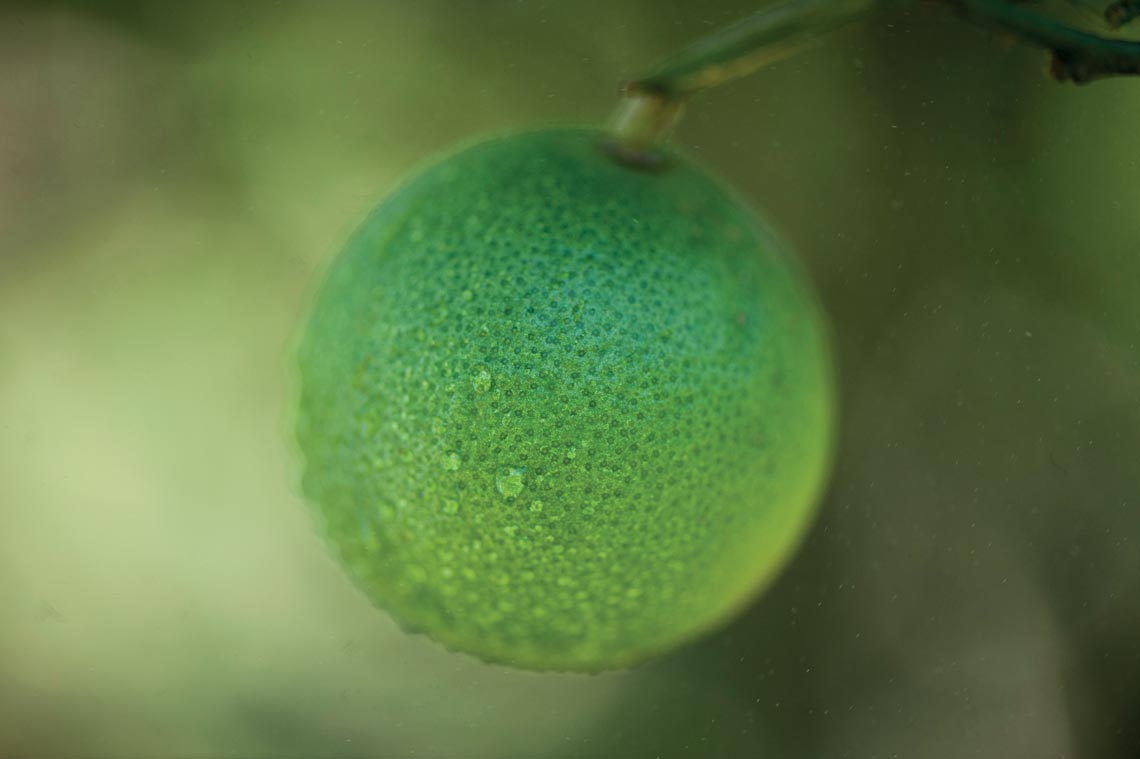 A research network based at Brazil’s Crop Science Institute (IAC) has launched several genome editing projects to improve the quality and yields of three of the country’s most important crops: coffee, sugarcane, and citrus. The research efforts will work toward several defined research targets, such as developing low-caffeine coffee beans, greening resistant citrus plants, and improved sugarcane varieties. These targets are steppingstones toward a broader ambition of building expertise in the use of CRISPR-Cas9—an acronym for Clustered Regularly Interspaced Short Palindromic Repeats—in Brazil’s crop science community (see Pesquisa FAPESP issue nº 288). CRISPR can be thought of as a pair of scissors used to precisely remove or add DNA sequences in human, animal, plant, or microorganism genomes. The promising applications of the technique in developing treatments for genetic diseases earned French researcher Emmanuelle Charpentier an American Jennifer Doudna the Nobel Prize in Chemistry in 2020.

In agriculture, the ability to manipulate plant DNA has created new possibilities for genetic crop improvement. Gene editing can have advantages over transgenics as it is easier and cheaper to modify sequences of nucleotides and rewrite them in specific orders than it is to introduce entire genes. Compared to traditional methods, which develop plant varieties via hybridization and randomly occurring mutations, CRISPR-Cas9 promises a faster and more accurate process. Another  advantage is that specific features of a species can be altered without undoing genetic architectures developed over decades of field research.

IAC, an institute linked to the state government of São Paulo, has coffee, citrus, and sugarcane research centers in respectively Campinas, Cordeirópolis and Ribeirão Preto. It has also established collaborations with Brazilian research groups at the University of São Paulo (USP), São Paulo State University (UNESP), the Federal University of São Paulo (UNIFESP), and the Brazilian Agricultural Research Corporation (EMBRAPA); as well as foreign research groups at the University of Florida, the University of Queensland, Australia, and the Max Planck Society, in Germany. The initiative will be funded by and involve research teams from companies such as Amazon Agrosciences, CiaCamp, Daterra, GranBio, Citrosuco, Agroterenas, Jacto, and Fundag. In an estimated total investment of R$35 million over five years, FAPESP will provide R$4.54 million in funding and partner companies another R$4.47 million; IAC and partner institutions will contribute R$25.79 million in kind in the form of researcher salaries and laboratory and equipment time. 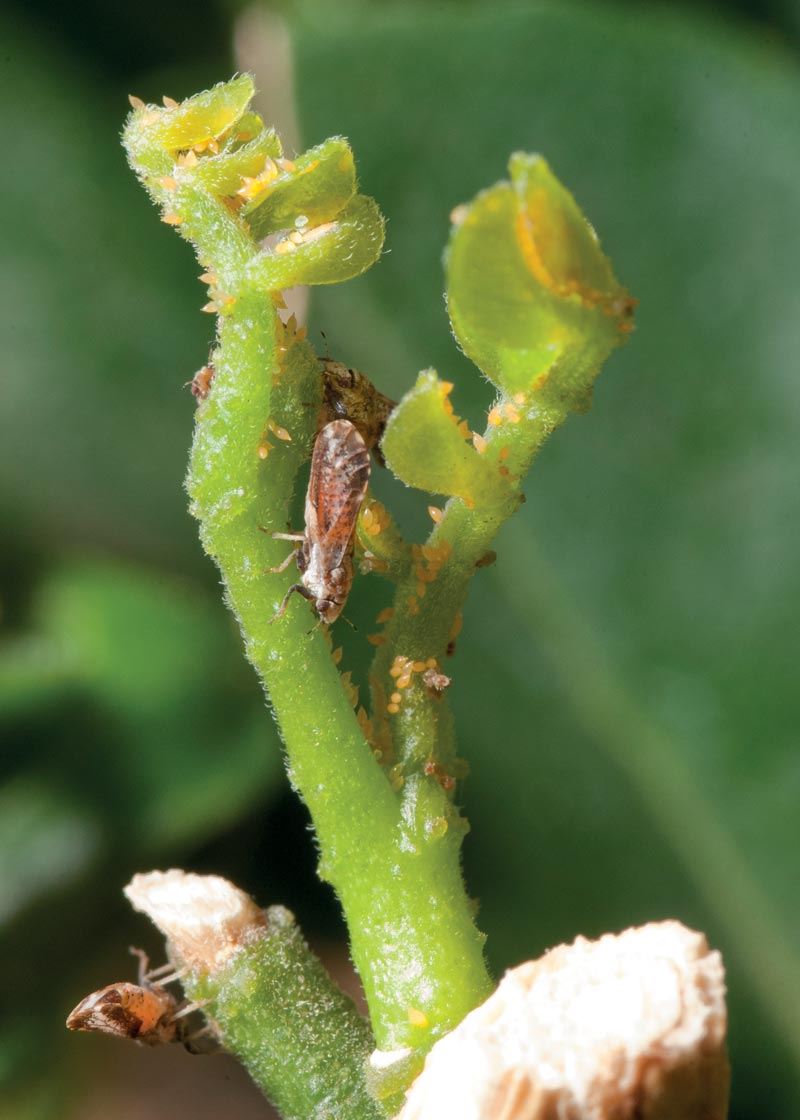 The initiative is the first organized as a Problem-Oriented Research Program (NPOP), a collaboration model created as part the Science for Development program launched by FAPESP in 2019 to develop real-world solutions that can benefit the economy in São Paulo.  “Our research groups were already developing protocols to expand gene editing, and this project is accelerating the process,” says NPOP Coordinator Mariângela Cristofani Yaly, a crop scientist and researcher at IAC’s Sylvio Moreira Citrus Center in Cordeirópolis.

While the funds will also be used for research supplies such as chemical reagents and substrates to produce seedlings, they will primarily go to research grants. “Temporarily engaging specialist researchers through doctoral and postdoctoral research grants, alongside technicians, will significantly enhance our research capabilities, especially as institutions in São Paulo are now struggling to replace their retiring researchers,” says Yaly. The project will be staffed by 35 researchers from IAC and partner institutions, and 35 technicians and grant beneficiaries.

The citrus leg of the program will focus on citrus greening, a disease caused by the bacterium Candidatus Liberibacter and vectored by the sap-sucking insect Diaphorina citri. After infecting a citrus plant, the disease spreads to the roots, branches, leaves, and fruits, causing them to shrivel and deform. According to data from Fundecitrus, 19.02% of orange groves in São Paulo and Minas Gerais were infected in 2019. Currently the only way to control the disease is by eliminating sick plants and preventing the spread of the insect vector. “There are no commercial citrus varieties that are resistant to the bacterium,” explains Yaly.

In their CRISPR-Cas9 project, the researchers will build on a wealth of data from the development of transgenic varieties that have been tested in field experiments. “Previous research has shown that 10 specific genes may play a role in resistance to the disease. We will now use gene editing to try to silence them,” she says. Within five years, the researchers hope to create a method for applying the technique to create edited varieties. “But the effort will continue in the following years until field-tested material has been validated and registered with the Brazilian Ministry of Health.” Yaly says the program is an extension of a project launched in the 1990s to sequence the genome of a bacterium, Xylella fastidiosa, that causes another citrus disease: citrus variegated chlorosis (CVC). “We hope the NPOP can successfully leverage CRISPR-Cas9 to start a new chapter in the genetic improvement of crop plants in Brazil.” 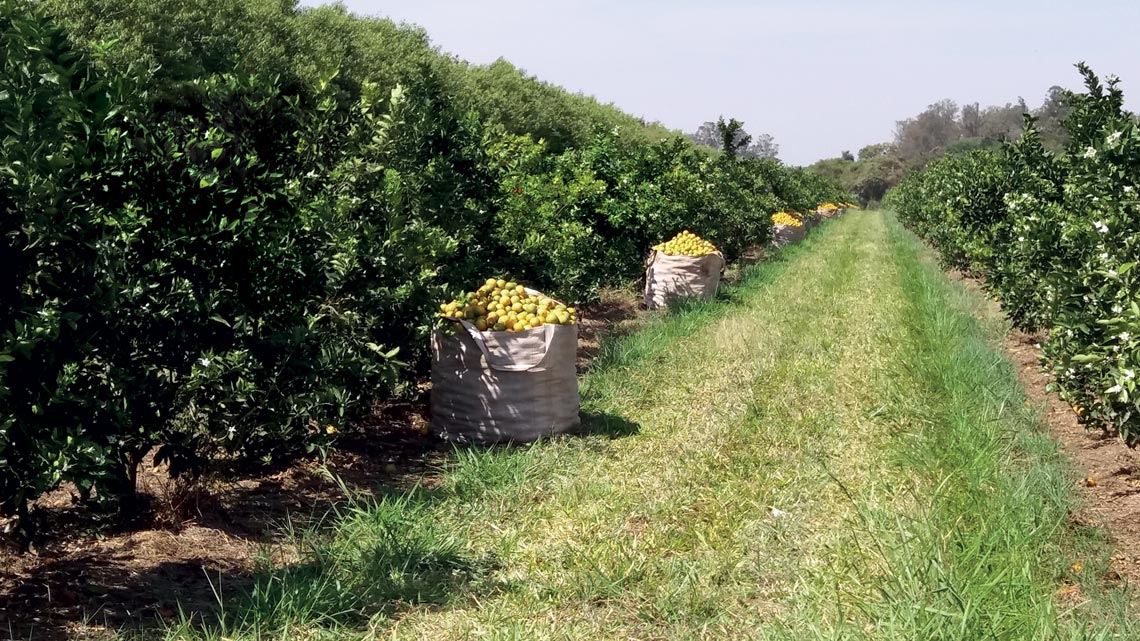 In the coffee leg of the program, researchers will work to develop varieties with ultra-low caffeine content. Decaffeinated coffee accounts for 10% of world consumption, but the chemical process to remove the stimulant also removes compounds that give coffee its characteristic flavor and fragrance. In 2004, a group of researchers from IAC and the University of Campinas (UNICAMP) identified three mutant Coffea arabica plants in the wild in Ethiopia that had only 0.07% caffeine, compared to 1–1.5% in commercial arabica coffee varieties and as high as 2.2% in robusta coffee. “Since their discovery, the three plants have been used to develop a new caffeine-free cultivar via classical methods involving crossbreeding and inbreeding,” explains Oliveiro Guerreiro Filho, a crop science researcher at the IAC’s Alcides Carvalho Coffee Center in Campinas, a member of the NPOP initiative. “But this is an incremental process that can take several years. After each crossing experiment, the researchers need to select the hybrids with the lowest caffeine content and then backcross them to retrieve the desired properties.”

Genome editing will help to accelerate the crop improvement process. “It will allow us, for example, to silence a single gene in a cultivar known to have a high yield and lifespan, but without disrupting the entire architecture.” One difficulty in developing these varieties has already been overcome. Using traditional improvement techniques, crop scientists could only tell if a hybrid plant would produce low-caffeine coffee beans when it started to develop fruit, two years after it was planted. IAC researchers have been able to accelerate this process in a collaboration with researchers at EMBRAPA. They identified markers that can be used for early detection of whether a plant is low-caffeine by analyzing the leaves. Developing low-caffeine coffee, says Guerreiro, is a good way to test the potential use of gene editing to improve coffee cultivars. “Once the process is mastered, the technique can then be used for different targets in coffee crops, such as drought and heat tolerance.”

The sugarcane leg of the project is primarily centered around transgenics. Specifically, it will incorporate CRISPR-Cas9 in research projects to develop transgenic varieties that are drought tolerant, resistant to sugarcane smut, or richer in cellulose content. “Transgenic sugarcane is already a reality and there’s more in the pipeline over the following years. We already have several transgenic varieties being tested in the field,” says Silvana Creste Dias de Souza, a crop scientist at the IAC Sugarcane Center in Campinas. “But we want to learn how to use gene editing tools, which can have a disruptive impact on research.” The goal of the project is to create a gene-edited sugarcane variety that is resistant to ALS-inhibiting herbicides, one of the herbicide classes most commonly used on sugarcane plantations. In parallel, the project is working to identify genes that can be modified to impart resistance to sugarcane smut, and develop “energy sugarcane” varieties with a higher content of fiber biomass to fuel thermal power plants. The complexity of the sugarcane genome makes this a significant challenge, notes Souza. Sugarcane is a polyploid organism: each chromosome has 8 to 10 copies, and they are not always the same. “Each gene has several alleles that can each impart a different phenotype [observable trait]. So targeting a specific gene to achieve a desired phenotype is a highly complex task,” she explains. 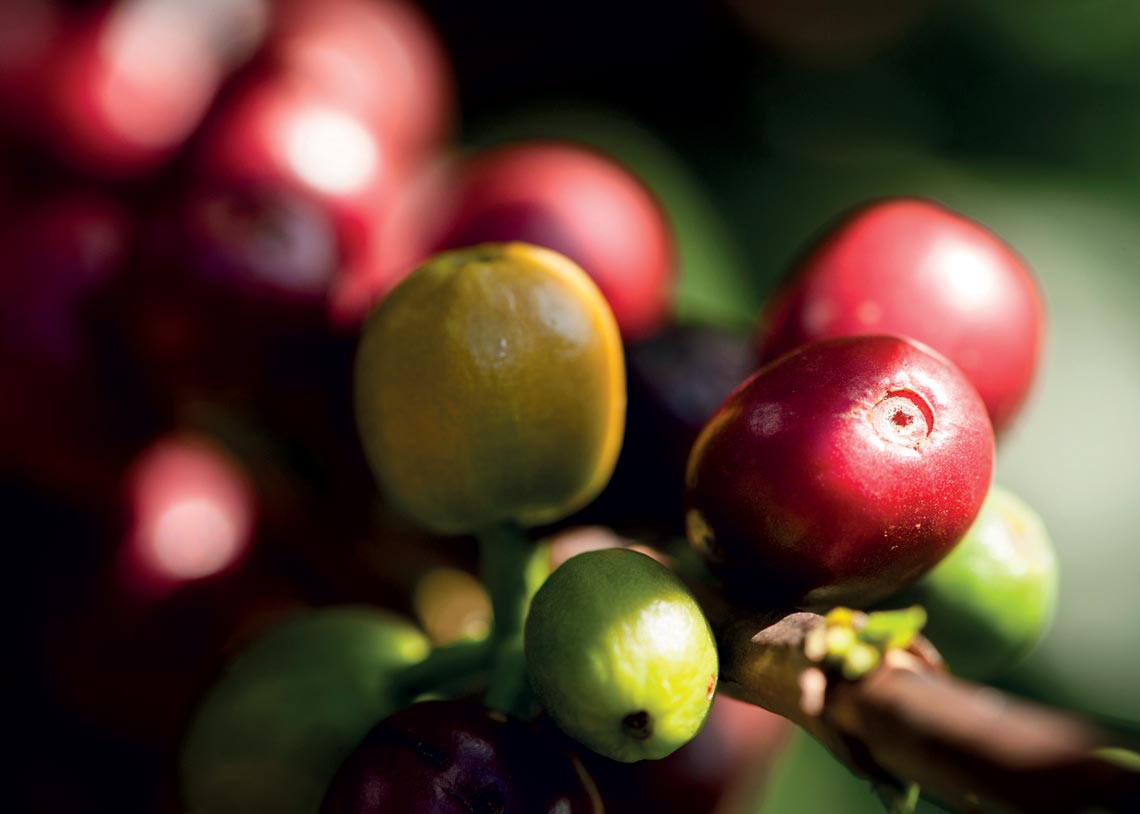 GranBio, a biotechnology company that develops second-generation ethanol from cellulose and hemicellulose, plans to invest R$1.5 million in NPOP’s sugarcane research. “We need better-yielding and more robust sugarcane varieties and CRISPR-Cas9 technology can help us produce them,” says José Bressiani, a director at GranBio subsidiary Biovertis.  The method can help to develop varieties whose cell walls are more readily broken down during pretreatment, optimizing the production of cellulosic ethanol and improving yields. Genome editing could, for example, be used for lignin modification to create a sugarcane variety in which cellulose and hemicellulose sugars are more readily accessible. “Achieving this via transgenics is a more lengthy and complex process,” says Bressiani.

One of the requirements for NPOP projects is that their host institutions develop partnerships with private companies to accelerate the application of research findings. FAPESP then matches the funding provided by the private partners. The teams at IAC have formed collaborations with several long-standing partners. The coffee research group, for example, has partnered with Daterra, a premium coffee producer that grows varieties developed by or jointly with IAC over several decades. “We invest 10% of our revenues in research. Our company has conducted more than 10 projects with IAC and has received extensive support from the institution in the past. We were never able to fully reciprocate their support and this partnership is an opportunity to do so,” says Luis Norberto Pascoal, Daterra’s research director. Part of the field experiments will be carried out at a site owned by the company in Franca.

The collaboration will not give partner companies exclusive rights in any resulting technologies, but they will have benefits such as royalty discounts over a specified period. The citrus leg has created a collaboration with CiaCamp, a startup that spun off from IAC in 2016 to commercially produce a compound for bacterial citrus diseases developed at the Citrus Center (see Pesquisa FAPESP issue nº 276). In a partnership with São Carlos–based fertilizer manufacturer Amazon Agrosciences, CiaCamp will invest R$50,000 per year in the NPOP project and hopes to create biofertilizers tailored for any new varieties that are developed. “Our company was built on research that we were able to monetize on the market. Now we have the opportunity to invest back in research,” says CiaCamp director Simone Picchi, a biologist who completed two post-doctoral internships at IAC before founding the startup.