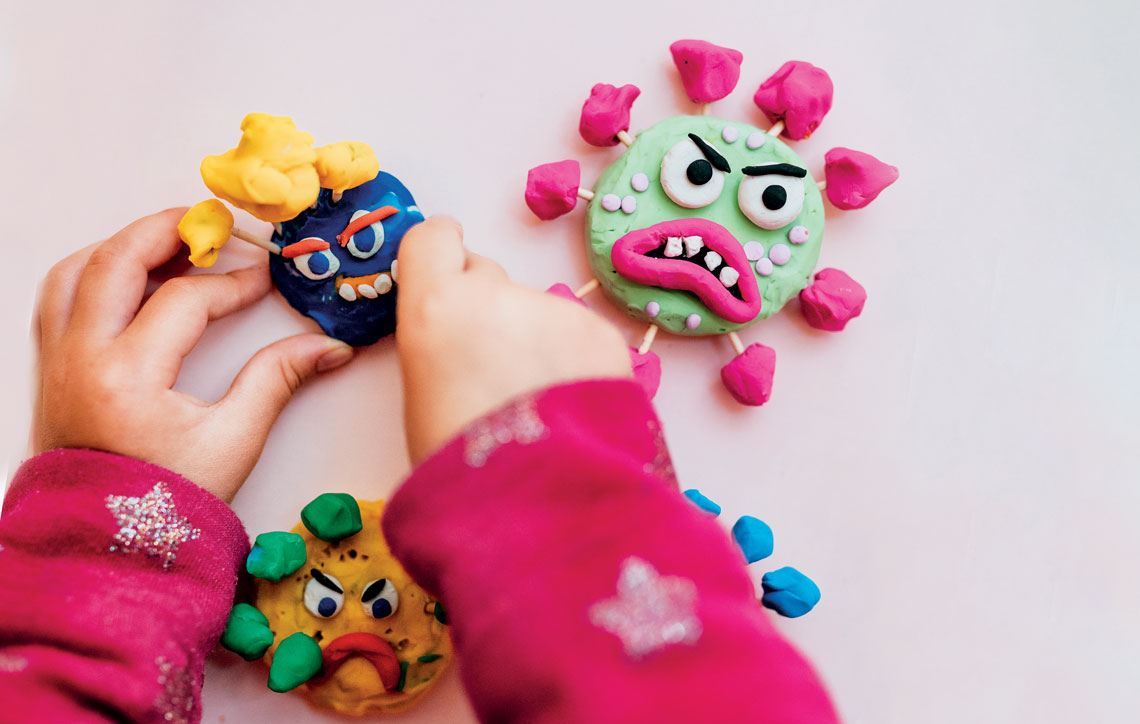 Among the many questions about the novel coronavirus yet to be definitively answered, one is crucially important to the safe reopening of schools: what role do children play in the chain of infection when it comes to SARS-CoV-2? Although there is evidence in the medical or scientific literature that children are capable of transmitting the virus, their contribution to the spread of COVID-19 on an individual level so far seems small. “Children are important vectors in the general transmission of the influenza and respiratory syncytial viruses among the community, both of which cause infections of the upper and lower airways,” says pediatrician Marco Aurélio Palazzi Sáfadi of the Santa Casa de São Paulo School of Medical Sciences (FCMSCSP) and head of the Pediatric Infectious Diseases Service at Hospital Infantil Sabará. “For COVID-19, this has not been demonstrated. Yes, they play a role; they can transmit SARS-CoV-2, but so far they have not been identified as major contributors.

What is clear is that children and adolescents have been spared more than any other age group in this pandemic. In Brazil, between 0.6% and 0.7% of all COVID-19 deaths have been under 20 years old, according to Sáfadi, who is also president of the Department of Infectious Diseases at the Brazilian Society of Pediatrics (SBP). “Less than 1%, from a group that represents more than 25% of the population,” emphasizes the pediatrician. “There have been deaths, but they definitely occur in fewer numbers.”

As well as being less likely to die from the novel coronavirus, children tend to suffer milder symptoms—or no symptoms at all—and are less at risk of developing more severe forms of the disease. Some studies also suggest that they are less susceptible to infection by SARS-CoV-2. “Research indicates that children are slightly less likely to be infected than adults. Usually, viral infections spread more easily via children, but this is not the case with COVID-19,” says pediatric nephrologist Ana Cristina Simões e Silva, from the Federal University of Minas Gerais (UFMG). “Some say that because they are not highly symptomatic, they may transmit the virus more easily, but we have no evidence of that.”

Since children and adolescents generally become less ill, the potential population for studies is smaller and research results tend to be conflicting, says Simões e Silva. A study carried out in two southern states of India, the country with the second highest number of confirmed cases worldwide, suggests that the risk of infection is highest among people of the same age group. According to the paper, published in the journal Science on September 30, data were analyzed from more than 575,000 individuals of all ages exposed to 84,965 confirmed cases of COVID-19.

According to the study’s first author, economist and epidemiologist Ramanan Laxminarayan, director of the Center for Disease Dynamics, Economics, and Policy (CDDEP) in Washington D.C., USA, this trend manifested primarily among children aged up to 14 years old (despite schools being closed) and individuals over 64 years old. “Children aged 10 or older spread the virus effectively; this age group transmits more efficiently than younger children,” Laxminarayan told Pesquisa FAPESP.

The study also presented other data: 71% of infected people whose contacts were traced did not transmit the coronavirus to anyone else; however, just 8% of infected individuals, whose age range was not detailed in the study, were responsible for 60% of new infections. “In theory, children could act as super spreaders, but we have no evidence of that,” says the epidemiologist.

Another recent scientific article suggests that there is still insufficient data to conclude whether children transmit SARS-CoV-2 more or less than adults. Published in Jama Pediatrics on September 25, the study, led by researchers from University College London, UK, involved a systematic review of 32 articles published to July 28 on the prevalence of SARS-CoV-2 in children and adolescents, but did not reach a conclusive verdict. Specifically, the study highlighted that the risk of children catching COVID-19 is 44% lower than for people aged 20 and over.

In contrast, an article published in Pediatrics in October based on a survey of 57,000 childcare providers in the USA, mostly working during the pandemic on programs for children under 6 years old, found that they had the same risk of being infected with the novel coronavirus as any other adult.

At the Institute for Children and Adolescents of the Hospital das Clínicas at the University of São Paulo’s School of Medicine (FM-USP), which generally attends to the most serious cases of COVID-19, one of the priorities now is to understand whether young people under 20 years old that have survived the acute phase of the disease are likely to suffer long-term health problems. Two-thirds of children with confirmed cases of COVID-19 at the institute already had a chronic condition before they caught the disease. “We don’t know what happens to patients after they leave hospital or those who only have a moderate form of the disease. Will it affect their organs, cause new autoimmune diseases, or lead to emotional problems?” asks pediatrician Clovis Artur Almeida da Silva, from the Pediatrics Department at FM-USP. “These are the big questions for the future. And we won’t have the answers until 2021 or 2022.”