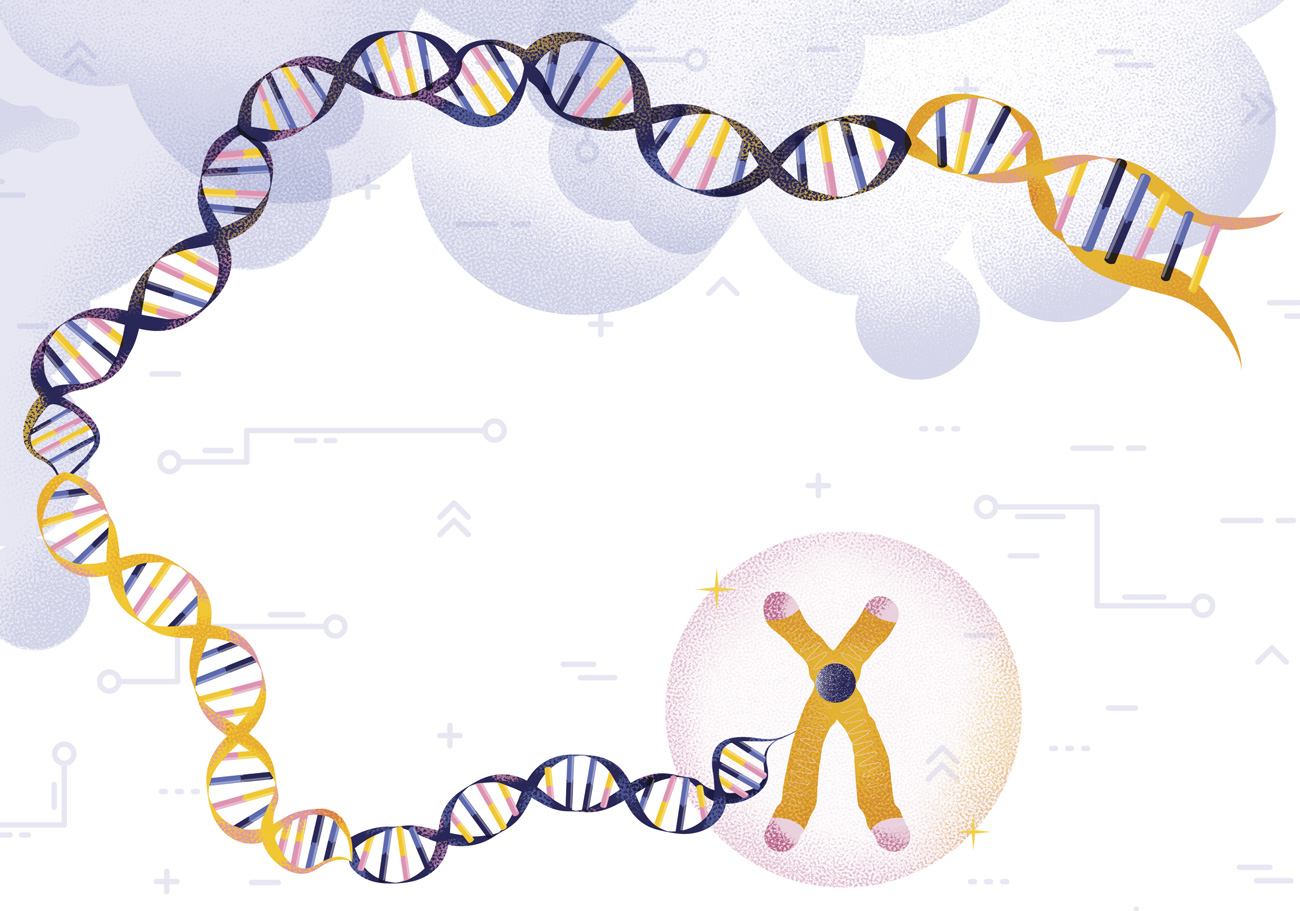 If the DNA of a human cell were stretched out, it would be 2 meters long; inside the nucleus, it is packaged and divided into chromosomes that are organized in a specific way during replication

When biologist Thiago Ga-zoni first examined the chromosomes of the smoky jungle frog (Leptodactylus pentadactylus) for his Master’s thesis at São Paulo State University (UNESP), he did not expect to discover the species with the largest number of sex chromosomes ever seen in a vertebrate, as described in an article published on the website of the scientific journal Chromosoma in January. The species has 12 of these DNA packages which form a ring during cell division as if circle dancing. It is nothing like the X and Y system that determines whether a human is male or female. The previous record holder was the platypus, which has 10 sex chromosomes.

“Less than 5% of the amphibians the chromosomes of which have been described so far have easily identifiable sex chromosomes,” says Gazoni, who continued the study while obtaining his PhD, which he completed in 2015. This means that when making the karyotype—a way of organizing and studying a set of chromosomes—it is usually impossible to visually distinguish which chromosomes are related to the determination of sex. In fact, little is known about the specific genes that make amphibians male or female, a function performed in mammals by the SRY gene.

Even more curious is that the 13 frogs studied (six females and seven males) had more sex chromosomes than non-sex chromosomes (autosomes); 12 of the total set of 22 chromosomes are related to the determination of sex. “Sex chromosomes are defined by the visual differences between male and female karyotypes,” explains Gazoni. The chromosomes unique to a sex are responsible for defining it. During evolution, autosomes undergo alterations that may give rise to chromosomes with genes specific to one of the sexes. Other genes near the sex chromosomes are gradually inactivated, creating specialized chromosomes. The inactivated parts become more condensed and can be identified by certain staining methods.

In 2014, Gazoni spent three months at the University of Cambridge, UK, at the laboratory of geneticist Malcolm Ferguson-Smith, developing a probe capable of marking the chromosomes of the frogs and mapping the exchanges that occur between different chromosomes. In the future, he hopes to identify and locate the genes related to sex determination in these amphibians.

“We still do not know why some species have multiple sex chromosomes,” says biologist Patricia Parise-Maltempi from UNESP, who was Gazoni’s cosupervisor during his doctorate, together with zoologist Célio Haddad from the same institution. Parise-Maltempi did a postdoctoral fellowship with Ferguson-Smith approximately ten years ago, learning about techniques such as chromosome painting, which allows scientists to identify specific parts of the chromosome and compare karyotypes. She specializes mainly in fish, which also have multiple sex chromosomes, but she says that knowledge about sex determination is still very limited. In fish and the L. pentadactylus frog, surplus sex chromosomes are not inactivated, as is the case in mammals, in which one of the two X chromosomes in females is silenced to maintain a level of genetic activity equal to that in males, who only have one X chromosome (see Pesquisa FAPESP, issue no. 260).

Evolutionary mystery
There are equally no inactivated chromosomes in previous record holder, the platypus: although it sports a beak and webbed feet, this strange Australian egg-layer is a mammal, not a duck. Members of the monotreme order of egg-laying mammals along with the spiny equidna, the platypus feeds milk to its young, even though it does not have teats. Since the 1970s, we have known that these curious underwater hunters have 52 chromosomes, of which 10 are related to sex determination and form a chain during cell division. It was another 30 years until the tools needed to study this system became available, according to German geneticist Frank Grützner, from the University of Adelaide, Australia, who has been studying this mystery since 2002. “I had learned a technique called fluorescent in situ hybridization, which makes it possible to mark chromosomes with different colors,” he says. “It was clear that it would allow us to solve this complex system, but it took several years of hard work to show that there were five pairs of XX or XY chromosomes that form an alternating chain during the meiosis phase of cell division” (see infographic).

Particularly relevant to our understanding of the evolution of sex-determination systems was the discovery that this chain of chromosomes in the platypus contains genes typical of the X chromosomes found in mammals and in the Z chromosomes of birds, according to an article by Grützner published in Nature in 2004. The discovery suggests that these systems, which were previously believed to have arisen independently, may share a common origin. Even so, it is still unclear which gene determines sex in this species. Attempts to sequence the full genome are ongoing, with further difficulties regarding the Y chromosome. “Recently, while working with Henrik Kaessmann [from Heidelberg University, Germany], we discovered a potential candidate—an AMH gene linked to the Y chromosome,” he says. “This gene is traditionally linked to the development of the reproductive organs, so it will be interesting to see how it may be involved in sex determination in this species.”

Fingerprints
In addition to the profound evolutionary implications of the genetic sex-determination system, chromosome configuration is widely used to help characterize a species, sort of like a fingerprint. This was one of the objectives of Gazoni’s Master’s research, which was supervised by UNESP cytogeneticist Sanae Kasahara, who died in January of this year. “There were poorly resolved taxonomic issues relating to the genus, so Olivia Araujo and Felipe Toledo, who were researchers in Haddad’s lab at the time, brought us an L. pentadactylus male collected in Paranaíta, Mato Grosso,” he says. “We soon identified several chromosomal rearrangements.”

The study progressed in other directions, but attempts to classify the species continue. “Our recent research shows that there are actually two species currently referred to as L. pentadactylus, and we need to figure out which is the real one,” says Gazoni. He plans to name the new species after his first supervisor, who dedicated her career to researching cytogenetics in vertebrates.