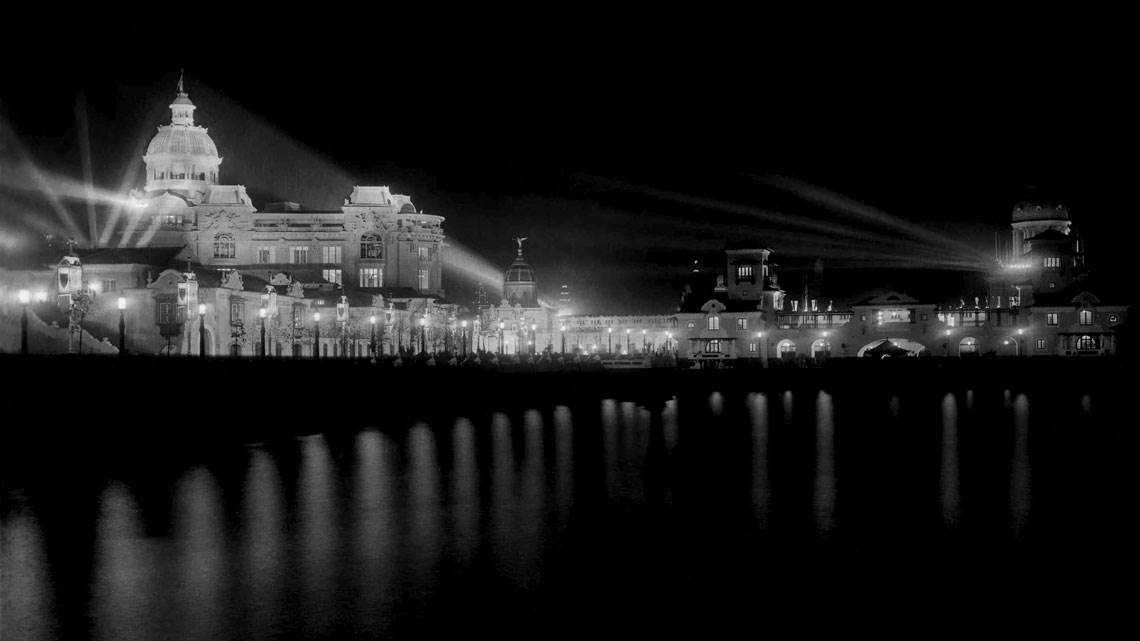 Night view of the Brazilian States Pavilion, one of the buildings constructed for the Independence Centennial Exposition in May of 1923, along Rio de Janeiro’s waterfront

The 100th anniversary celebration of Brazil’s independence was a remarkable event hosted in Rio de Janeiro—at the time the country’s political hub and capital city—from September 7, 1922, to July 24, 1923. The Independence Centennial Exposition attracted three million guests and attendees who purchased tickets—equal to 10 percent of Brazil’s total population at the time—and ten thousand exhibitors from Brazil and fifteen other countries, including England, the United States, France, Denmark, Sweden, and Japan.

One of the largest expositions ever held in the country, it took the Brazilian Ministry of Agriculture, Industry, and Commerce two years to plan. Their mission was to showcase Brazil’s desire to join forces with the world’s most modern nations to harness nature and recover its economy, reducing the role of agriculture and increasing that of industry. However, this longing for industrialization would only begin to take shape a decade later, during the Getúlio Vargas administration (1930–45).

The Rio de Janeiro Expo was the 29th World’s Fair—in 1922, the United States had already hosted eight, while France and the United Kingdom had hosted five and three, respectively. All were inspired by the inaugural fair, held in London in 1851, which attracted six million people. Next was the Paris Expo, the first to use the term “World’s Fair,” which gathered five million visitors in 1855. At these events, each country showed the world its accomplishments and plans for the future. It was a space for innovation: in 1893, for example, the World’s Columbian Exposition in Chicago exhibited cutting edge innovations, such as fruit flavored gum and the dishwasher.

“The 1922 Expo distanced itself from the ethos of progress, according to which the world would always continue improving, as this belief was shattered by the First World War [1914–18], instead highlighting modernism, which entailed the domestication of nature through technology,” comments Marly Motta, historian and retired professor at Rio de Janeiro’s Getúlio Vargas Foundation (FGV-RJ). “Steel was more important than gold, and electricity more so than waterfalls, because exploiting nature was more important than nature itself. It was thought that this would be a way for Brazil to become one of the world’s most advanced countries, a long-standing dream from the days of the Brazilian Empire.”

However, she notes, the centennial celebration took place during a time of political tension, marked by the state of siege and press censorship imposed by then president Epitácio Pessoa [1864–1942] in response to the Revolt of Copacabana Fort, in July of 1922. One of the most turbulent periods of the First Brazilian Republic (1899–1930), the revolt united Armed Forces officers and political groups dissatisfied with the federal government. 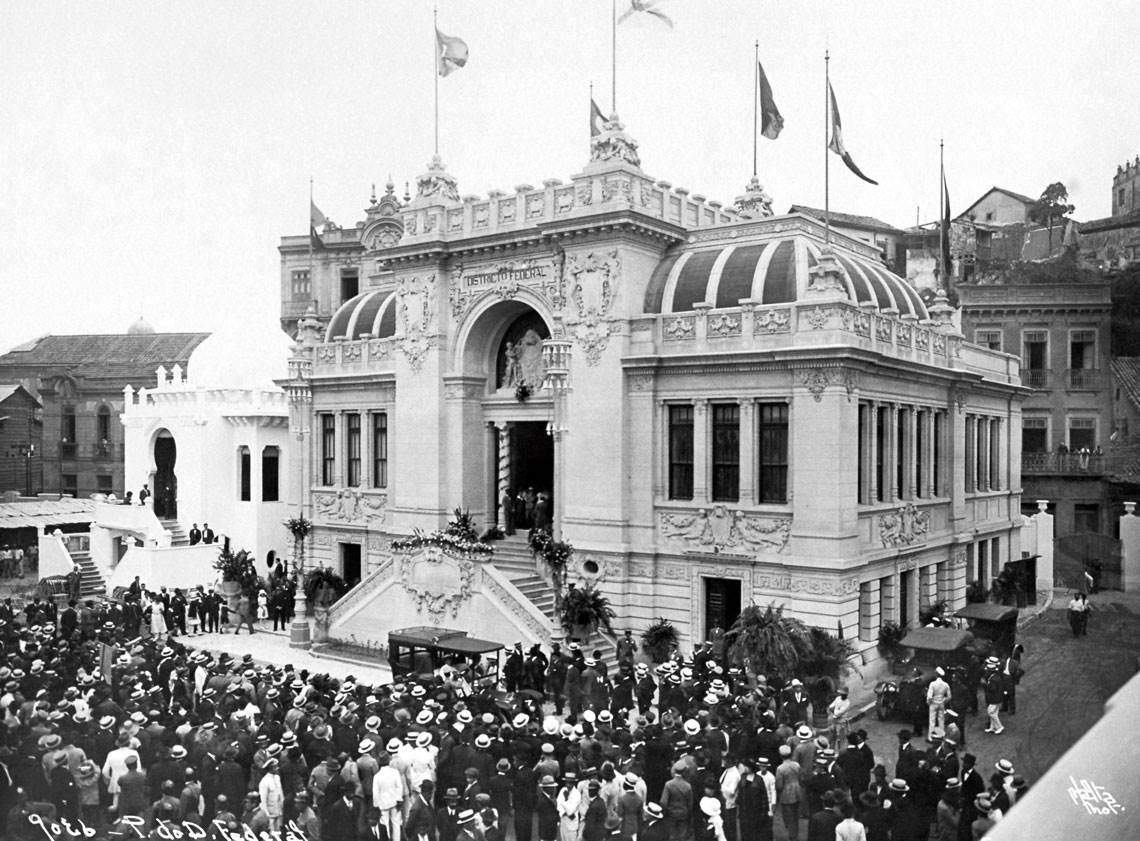 The exposition consisted of monumental buildings and the main entryway, on Avenida Rio Branco, towered 108 feet tall. The fair’s national area, featuring the grandiose buildings referred to as “palaces” and the more modest “pavilions,” spanned twenty-five sections and showcased Brazil’s pursuits in education, healthcare, commerce, mechanics, chemical industry, hunting and fishing, forestry, craftsmanship, statistics, sports, and other areas. Each state occupied a pavilion. There was also a spectacular amusement park, with festivities, music, movies, and lectures on the country’s natural resources.

The fifteen international pavilions were positioned around Praça XV de Novembro, where they displayed their products and conducted business. Each pavilion was built by its respective country using traditional architecture—Mexico’s pavilion, for example, was inspired by Aztec architecture. Electricity was used to illuminate the buildings and streets at night. “Much like the railroad, electricity was an innovation with strong popular appeal,” says Carlos de Faria Júnior, a historian at the Federal University of Juiz de Fora in Minas Gerais.

During the exhibition’s keynote speech, delivered amid several military parades, Epitácio Pessoa highlighted the federal capital’s progress in fighting smallpox and yellow fever. In the book A nação faz cem anos: A questão nacional no centenário da independência (The nation turns 100: The national issue with the Independence Centennial; Editora FGV, 1992), Motta recalls that at the time there were other pervasive public health issues, mainly tuberculosis and syphilis, resulting from the population’s poor hygiene.

As part of the early century’s broad urban reform championed by Francisco Pereira Passos (1836–1913), Rio de Janeiro’s mayor between 1902 and 1906, and to make room for the exhibition’s palaces and pavilions, Morro do Castelo (Castle Hill) was demolished (see Pesquisa FAPESP issue nº 266). “The exposition represented modernism and Morro do Castelo represented stagnation. It was a process of urban modernization that eliminated anything that did not align with the idea of progress.” 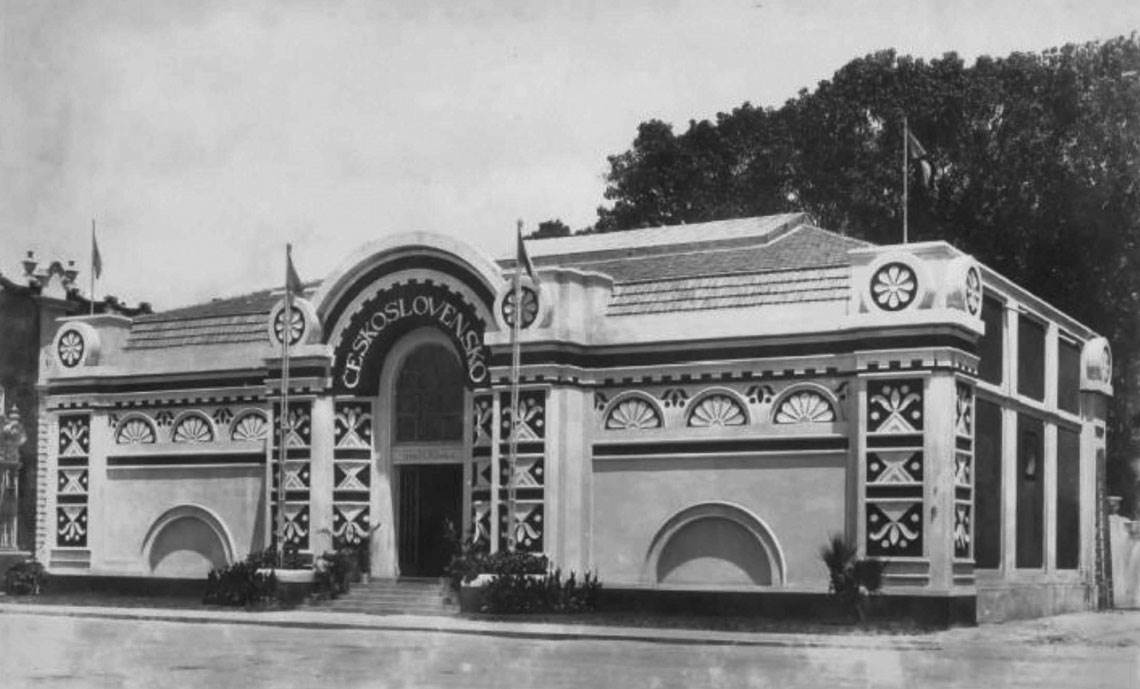 The city was founded in Morro do Castelo, located near the Municipal Theater and other imposing buildings along Avenida Central. It housed two churches—São Sebastião do Castelo and Santo Inácio, which functions as part of a children’s hospital—and an astronomical observatory, surrounded by approximately four hundred homes and five thousand low-income residents. The demolition was intensely debated in the newspapers, with arguments for and against. Nonetheless, it began slowly but surely, with workers wielding shovels and pickaxes, but quickly progressed when a North American water jet company was hired. “The former residents were ousted to the suburbs,” describes Motta. After the exposition, most of the buildings were demolished, with the exception of three: the Federal District Palace, which houses the Museum of Image and Sound; the Major Industries Palace, which was taken over by the National Historical Museum; and the French Pavilion, a replica of Queen Marie Antoinette’s country house (1755–93) in the French city of Versailles, which is now home to the Academia Brasileira de Letras (Brazilian Academy of Letters).

The exposition inspired the construction of three lavish hotels with ocean views: Sete de Setembro, located in front of Sugarloaf Mountain, later incorporated into the Federal University of Rio de Janeiro; Glória, which housed the Heads of State during the fair; and Copacabana Palace, the only hotel from the time that is still in operation, designed by the French architect Joseph Gire (1872–1922), who also designed Glória, which closed in 2013.

“The crème de la crème of Rio de Janeiro’s samba dancers will be sure to dazzle in the Bam-bam-bam dance group,” announced Rio de Janeiro’s A Noite newspaper in an article published front and center on January 12, 1923. It was written in anticipation of the samba performance to take place during the centennial exposition.

“The performance by Black samba dancers revealed the disconnect between Brazil and cultural and regional Afro-Brazilian expressions, in contrast to Brazil’s connection with European values,” says the historian Walter Pereira, based on a study conducted by the Casa de Rui Barbosa Foundation in Rio de Janeiro (FCRB). The creator behind the Bam-bam-bam dance group and the performance organizer was a white political journalist and public school professor from Rio de Janeiro, Carlos Alberto Nóbrega da Cunha (1897–1974), who combined his trips to the Senate in search of news with visits to the city’s suburbs to watch the samba circles.

As the exposition’s Mini-Carnaval was held in open air, it was postponed twice due to the risk of rain. Finally, on the night of February 4, a Sunday, before an audience gathered at the Festivities Pavilion, Cunha showcased what would now be called an “aula-show” (educational performance). He interspersed didactic explanations about Afro-Brazilian musical expressions with performances by sixty Bahian samba dancers from the Araújo and Pinto neighborhoods, accompanied by twenty-five percussionists playing tambourines and traditional Brazilian instruments such as the cavaquinho, reco-reco and pandeiro. After the performance, Black women dressed as Bahians distributed Brazilian delicacies to the spectators.

“Cunha presented the country’s elite with a less segregated perspective, illustrating that popular cultural expressions should not be disregarded from the development of a national image. As much as samba dancers were the focus of marginalization, they were not marginal. Newspapers at the time emphasized that they were honest workers, and not vagrants,” says Pereira. With funding from the State Secretary of Culture and Creative Economy of Rio de Janeiro (SECEC-RJ), he is working on adapting his studies on this historical chapter into a historical documentary to air by September of this year, as described in an article published in Cantareira magazine in January of 2021.