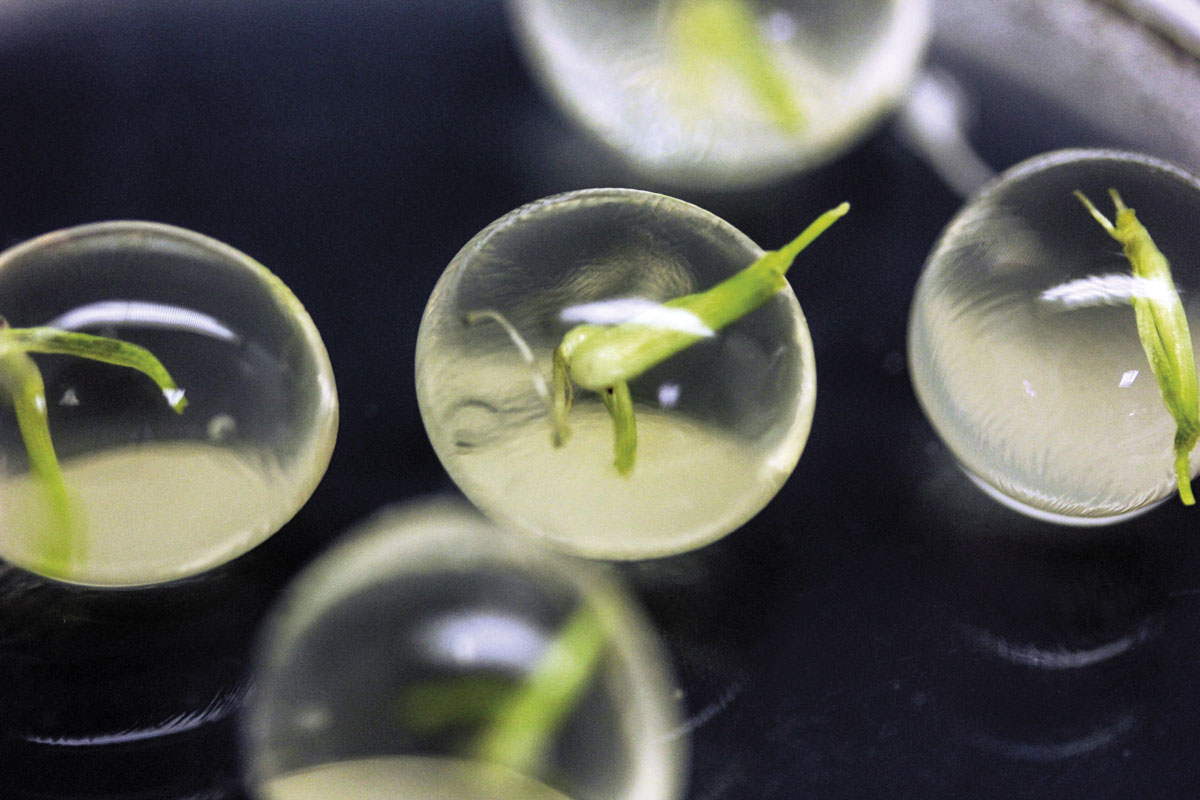 Brazil is, by far, the world’s largest producer of sugarcane, with 657,000 tons harvested in the 2016/2017 season, close to twice that of the second-placed country, India, which produced approximately 350,000 tons. According to projections from the Brazilian Ministry of Agriculture, Livestock, and Supply (MAPA), sugarcane fields, which occupied 9 million hectares during the last season, are expected to remain in second place among Brazil’s major agricultural crops in financial terms. MAPA states that, through October, Brazilian sugarcane fields generated gross revenues of R$71.8 billion for their producers, behind only soybean plantations (R$116 billion).

Despite good performance, one concern worries this sector. The average productivity of sugarcane yields, at approximately 73 tons per hectare, has not grown in recent years. The economic crisis, which left mill owners with fewer resources to invest in plantation management (fertilizing, pest control, and renovation of the fields themselves), contributed to this stagnation, as well as the increase in the planted area. Some of these new regions, which have land less suitable for sugarcane cultivation, generate a negative effect in terms of productivity. Low productivity is a challenge faced not only by companies in the sector but also by research institutes and universities, which, for decades, have devoted themselves to studying cane crops to develop new technologies and create varieties of the plant that are more resistant to diseases and better adapted to different types of soils and climates.

The Sugarcane Technology Center (CTC), a biotechnology company located in Piracicaba, in the interior of São Paulo, is responsible for one of the country’s three sugarcane genetic improvement programs, together with the Inter-University Network for Development of the Sugarcane Industry (RIDESA), headquartered in Araras, São Paulo, and the Campinas Agronomic Institute (IAC). In June of 2017, the CTC received authorization from the Brazilian National Technical Commission for Biosecurity (CTNBio), the agency responsible for assessing biosecurity in genetically modified organisms (GMO), to sell the first transgenic sugarcane in the country (see Pesquisa FAPESP, issue no. 260).

This new variety is called CTC 20 Bt and is resistant to the sugarcane borer, the larval stage of the moth Diatraea saccharalis, which is considered Brazil’s main sugarcane pest. The insect causes annual losses of around R$5 billion in the sugarcane crop from reduced productivity, poor quality of the sugar produced, and pest control expenses. The first Bt sugarcane seedlings, which contain the Cry1Ab gene from the soil bacterium Bacillus thuringiensis in their genome, are already being made available to selected customers to start the multiplication process, which should take two to three years. These plants will then be used to produce sugar and alcohol.

“The genetically modified sugarcane created by the CTC is an important advancement in technology applied to sugarcane. It will be reflected in gains in agricultural and industrial productivity and in the quality of the crop and the sugar,” predicts Antonio de Padua Rodrigues, technical director of the Brazilian Sugarcane Industry Association (UNICA), an entity whose members account for more than half of national production. “Compared with other agricultural crops like soybeans, corn, and cotton, which already benefit from advanced breeding and biotechnology techniques, sugarcane is estimated to be roughly 20 years behind. This results in a lower historic gain in productivity.”

The development of transgenic sugarcane, which the CTC expects to drastically reduce the rate of infestation (which today stands at approximately 3% to 5% of the country’s crop) is the result of continuous research efforts. “Work focused on this variety began in 2011, but our studies involving genetically modified sugarcane extend back more than 10 years,” says agricultural engineer William Lee Burnquist, director of genetic improvement at the CTC.

Research is carried out by a team comprising 260 employees, 60% of the total

The CTC, which was created in 1969 as the COPERSUCAR Technology Center, began as a research subsidiary of the São Paulo State Sugarcane, Sugar, and Alcohol Producers’ Cooperative (COPERSUCAR). “The researchers’ focus was genetic improvement of the sugarcane. They were trying to develop cultivars with greater productivity as well as tolerance to diseases, pests, and drought,” recalls Burnquist. In 2004, the CTC became a nonprofit association and, seven years later, an anonymous society. Last year, it was registered as an open company with the Brazilian Securities and Exchange Commission (CVM) and was listed on the São Paulo Stock Exchange (BOVESPA); today, it holds a B3 rating. Its main shareholders are large mill owners, who are responsible for 60% of the cane milled in the country.

Today, between 70% and 80% of the CTC’s revenues (R$146 million in 2016) are directed toward research and development (R&D). The main source of the company’s income derives from licensing to use and multiply cultivars in exchange for royalty payments. Research is the responsibility of a team comprising 260 individuals (60% of the 435 total employees); 30% of these hold master’s and doctorate degrees and have academic training in agronomy, agricultural engineering, biology, and chemical engineering. Two years ago, the company inaugurated a complex of biotechnology laboratories spanning more than 1,400 square meters (m2), expanding its capacities in genetic transformation and molecular analyses. These units were essential to bring about revolutionary innovations such as transgenic sugarcane.

Genetic improvement
Along with advances in biotechnology, the CTC’s R&D division is devoted to three other projects: cellulosic ethanol technology, also known as 2nd generation (E2G) production using biomass from sugarcane (leaves and bagasse, the fiber left over after pressing out the sugarcane juice, new planting systems, and conventional genetic improvement through plant breeding. Since the company’s founding, 87 new varieties have been developed by the team working on the CTC’s Genetic Improvement Program (PMG) for sugarcane. By crossing different varieties, a process known as hybridization, researchers combine the parent plants to obtain a third plant with characteristics exceeding those of its parents after several combinations.

In Brazil, there are more than 500 commercial varieties of sugarcane. Fifteen of these occupy 80% of the cultivated area in the South-Central region, where 90% of the country’s sugarcane is produced, and the remainder is grown in the Northeast. Seven of these 15 main varieties were developed by the CTC, accounting for approximately 30% of the planted area in the country (see table). The cultivars produced in the company’s laboratories receive two names: CTC (released after 2005) and SP (created prior to 2004, when the CTC was still a research branch of COPERSUCAR).

Sugarcane plantations are expected to occupy 8.7 million hectares during the 2017/2018 seasonEduardo Cesar

During the conventional plant breeding process, varieties are crossed at the Camamu research station in Bahia, where the temperature and humidity are ideal for the natural flowering of sugarcane. Here, the company maintains one of the largest sugarcane germplasm banks in the world, with more than 5,000 parent varieties. The CTC database contains detailed information about the performance of these varieties and the history of the families they have produced. The information is used to predict the performance of new crosses in six areas where the company’s genetic improvement program operates, all located in the South-Central region of the country. The company produced customized varieties for each of these regions, meeting the specific needs of each place.

Another central line of research for the CTC is the development of new planting technology based on cane seeds, an old technique. The current model, in which cane stalks are buried in furrows in the soil using tractors and other agricultural implements, is considered inefficient because it requires large quantities of raw materials, equipment, inputs, and labor. “Any new planting technology is welcome. The current system is onerous for producers, consumes much diesel, emits pollutants into the atmosphere, and contributes to soil compaction,” states industrial chemical engineer Cláudio Lima de Aguiar, a professor in the Department of Agribusiness, Food, and Nutrition at the Luiz de Queiroz College of Agriculture (ESALQ) of the University of São Paulo (USP).

Embryo in the laboratory
The project to develop a sugarcane seed started in 2009 and is expected to take several years to complete. “Our seed is an embryo created in the laboratory, generated by biotechnology, enclosed in an artificial endosperm [the tissue that covers the embryo and is responsible for its nutrition]. We have already defined several proof-of-concept models, but we are still seeking advances in the research to achieve the results we need,” emphasizes CTC agronomist and researcher Danila Montewka Melotto Passarin. “It is something really new. There is no defined format yet, but we believe that it will be the size of a soybean or slightly larger.”

For Antonio de Padua Rodrigues, technical director at UNICA, the industry is anxiously awaiting the CTC’s new planting technology. “It could represent an evolution in the production system for sugarcane. We hope to achieve gains in efficiency and quality, greater productivity, and cane field health,” he says. “The technology will allow areas currently used as seedling nurseries to be planted for production and will especially permit gains in speed and scale for new more modern and productive varieties of sugarcane.”

A model for success
The company conducts research and development, and the main shareholders are groups from the sugar and alcohol industry

The CTC’s work in research and development (R&D) and the positive results thus far also stem from the company’s business model. The biotechnology center, which began
as a research branch of COPERSUCAR, the São Paulo State Sugarcane, Sugar, and Alcohol Producers’ Cooperative in 1969, began its institutional turnaround in 2004. That was when it became a nonprofit research institution funded by COPERSUCAR’s members and the mills and suppliers’ associations. In 2011,it was transformed into a corporation (S.A.), and its main shareholders are in the sugar and alcohol sector.

“The transformation into an S.A. was meant to expand the company’s access to new technological and financial resources,” says Gustavo Leite, president of the CTC. “These resources are used in R&D focused on the sugarcane industry in order to increase its competitiveness. Today, the studies are concentrated in genetic improvement, biotechnology, and technologies with revolutionary potential and great impact for the productive future of the sector, such as artificial seeds.”

Seedling nurseries in greenhouses in the center in Piracicaba: research focused on genetic improvement and biotechnologyEduardo Cesar

In 2014, the Brazilian Development Bank (BNDES) joined the company’s shareholders. Two years later, its shares were first listed on the São Paulo Stock Exchange (BOVESPA). The coming years may bring an initial public offering (IPO) or capital opening, a procedure which marks the sale of shares to the public.

Leite believes that the progress made is the result of continuous investment in researchers and highly qualified professionals (see table). “In the model adopted by the CTC, the company keeps a fraction of the value created by the technologies it creates, passing most of the benefit to the client,” he explains. The revenue is then used to fund new research and technological advances. This form of operation could be used by other Brazilian companies because this model directs research toward the specific needs of a given sector. “This increases their sense of urgency, quality of investments, and commitment to results.”

According to Rosana Caron Di Giorgio, a specialist in business development and former innovation manager at the Brazilian Center for Research in Energy and Materials (CNPEM) who is currently responsible for designing the deployment of the Campinas Agricultural Center Relations Platform, the CTC’s model is uncommon in Brazil. “Bringing the companies together to share the risk, especially in the early stages of research (the precompetition phase), as well as planning R&D activities according to the demands of industry, are fundamental points of this model,”she said. She recalls that it is normally the government that assumes the risk of research investments. Industry often enters later in the process, when the technology is already more mature, has been better demonstrated, and the risk is lower.