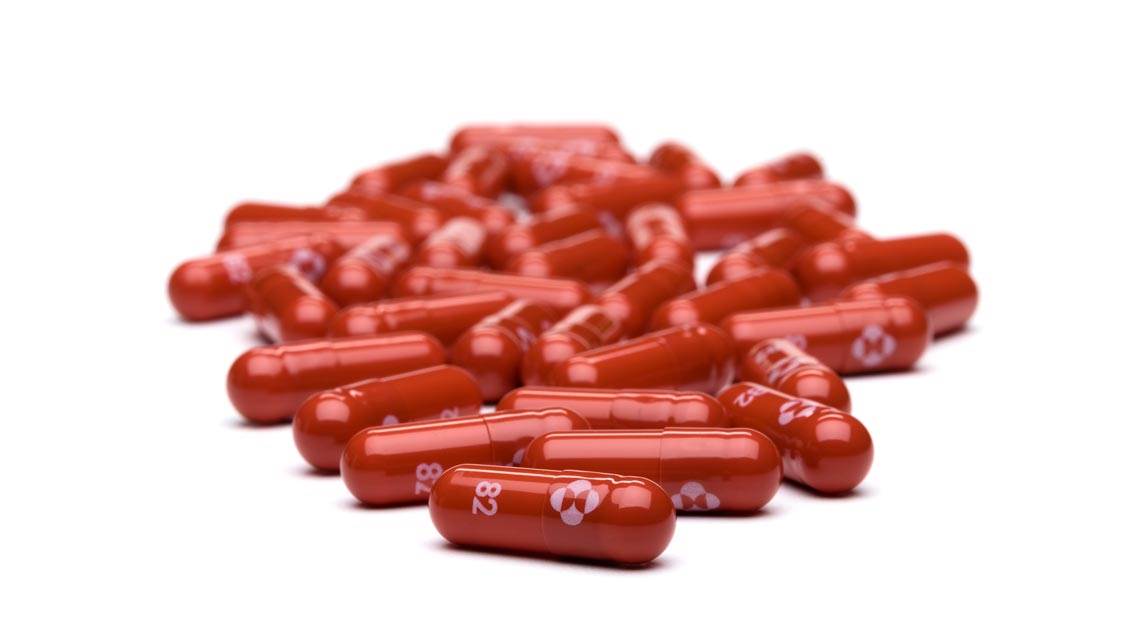 Two years after COVID-19 emerged in China, the world continues to deal with the SARS-CoV-2 pandemic. With nearly 9 billion vaccine doses administered worldwide—most in high-income nations—more than 47% of the global population is now fully vaccinated against the disease. Although this is not enough to stop the spread of the virus—especially when new variants like Omicron appear to evade the vaccine to some extent—advances are also being made on other fronts. The most encouraging news concerns two antiviral drugs, the first to be administered orally, that have shown promising clinical results: paxlovid, made by Pfizer, and molnupiravir, made by Merck Sharp & Dohme (MSD) in partnership with biotechnology company Ridgeback Biotherapeutics.

The UK approved molnupiravir on an emergency basis in early November under the trade name Lavregio. It has also been authorized by the US Food and Drug Administration (FDA) and has been recommended by the European Medicines Agency (EMA) for patients who do not require oxygen or who are not at risk of developing a severe form of the disease.

Read more:
– The uncertainties of omicron

According to a global study by MSD that involved 1,433 participants in 170 countries—including Brazil—the drug reduced hospitalizations and deaths from COVID-19 by 30% in symptomatic patients with at least one risk factor (obesity, diabetes, severe heart disease, or aged over 60).

Of the 709 volunteers who received molnupiravir, also called MK-4482 or EIDD-2801, 48 (6.8%) were hospitalized. Of the 699 participants who took a placebo, 68 (9.7%) were hospitalized. Nine deaths were reported in the placebo group versus one among those taking the antiviral drug. Treatment consisted of 800 milligrams (mg) of molnupiravir administered twice a day for five days.

Pfizer’s drug, meanwhile, was authorized by the FDA on December 22 for emergency use in patients infected with SARS-CoV-2. The clinical trial carried out by the pharmaceutical company was originally designed to include 3,000 volunteers from 21 countries, including Brazil. After promising early results, the sample size was reduced to 774 people.

When given to patients with at least one risk factor prior to the third day of symptoms, the drug decreased hospitalizations and deaths by 89% compared to the control group. Less than 1% of patients who took the drug (3 people out of 389) were hospitalized and none died, while 7% of those who received the placebo were hospitalized or died (27 out of 385, with 7 deaths). The patients were given two 300 mg doses of paxlovid per day, plus 100 mg of ritonavir, for five days. The latter is used to treat HIV and helps increase the amount of time the antiviral remains active in the body. 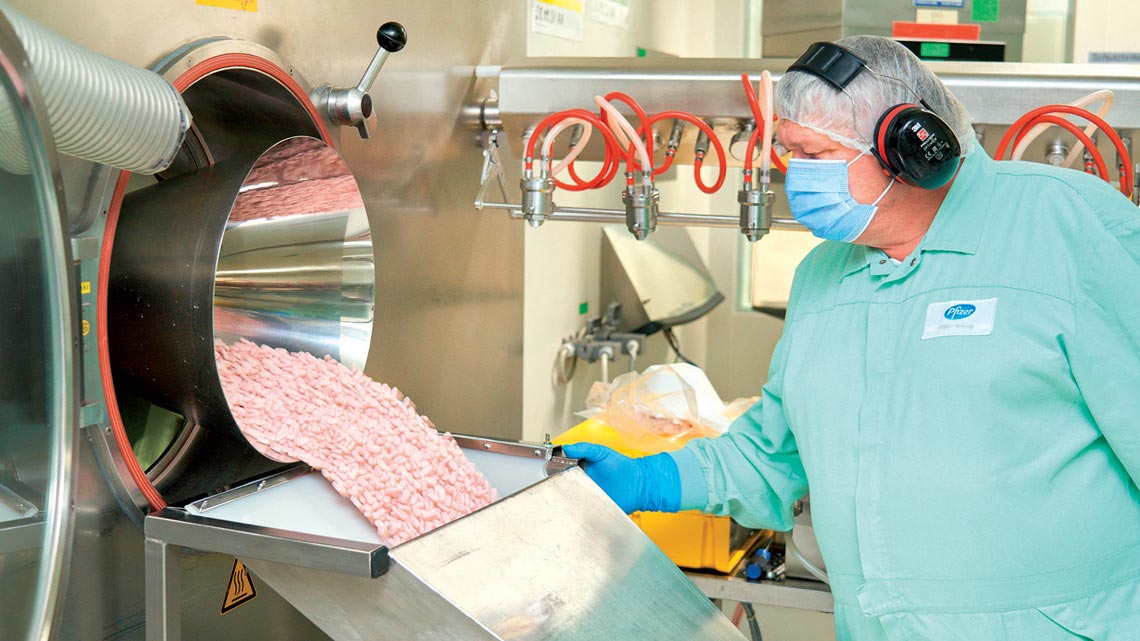 Different strategies
According to the Biotechnology Innovation Organization, 264 antiviral drugs are currently under development worldwide to tackle SARS-CoV-2, in addition to 233 vaccines and 364 other treatments, totaling 861 medical approaches to contain the pandemic. These vaccine and drug candidates fight the virus in different ways.

“The mechanism used by molnupiravir is broad-spectrum, meaning that it can act on several viruses whose genetics are formed of RNA [viruses can also be made of DNA]. This is the case with the arboviruses responsible for dengue, Chikungunya, and Zika, as well as the virus that causes flu,” explains Marina Della Negra, MSD’s medical director in Brazil.

Della Negra says that molnupiravir, originally developed by scientists at Emory University in Atlanta, USA, was intended for use against other viruses, such as the flu, until the beginning of 2020. Ridgeback Biotherapeutics then bought molnupiravir, and the COVID-19 pandemic changed the course of its development, focusing on SARS-CoV-2. Clinical trials began in April, and Ridgeback partnered with MSD the following month.

The results helped to explain the key qualities of the new drug. “The mechanism of action inhibits the replication of any viral RNA. Basically, it introduces particles analogous to the nucleosides [basic RNA or DNA units] that form the virus’s genetic code into the body. This generates mutations and causes what we call a viral error catastrophe, where the RNA becomes unviable and the virus stops replicating,” explains Della Negra. It was this that led to a drug initially designed to combat the virus that causes influenza becoming yet another weapon in the arsenal against SARS-CoV-2.

The fact that molnupiravir genetically alters the novel coronavirus also raised a concern: could the drug cause genetic mutations in carriers of the virus that lead to undesirable side effects, such as the development of cancer? According to Della Negra, studies showed a low risk of genotoxicity in live test subjects, such as mice and other rodents.

“There is a theoretical risk, but preliminary investigations in animals by MSD did not show any increased risk of mutations. But broader and longer-term studies are needed,” says Eduardo Medeiros, an infectious disease specialist from the Federal University of São Paulo (UNIFESP) and scientific director at the São Paulo Society of Infectious Diseases (SPI).

Pfizer’s drug followed a different path. “We have a bank containing thousands of molecules that are studied and undergo periodic screening to identify whether they show promise and viability for various purposes. Since there have been other coronaviruses in the past, we had already an idea of the type of molecule in our portfolio that might be effective against an emerging coronavirus,” explains Marjori Dulcine, medical director for Pfizer in Brazil. She clarifies that paxlovid is only the commercial name in the USA. “For now, in the rest of the world, we call it PF-07321332 or molecule 1332.”

The drug uses a different approach to its competitor, MSD. Instead of functioning as a broad-spectrum antiviral, molecule 1332 acts exclusively against the virus that causes COVID-19. “Our molecule is the first to inhibit the 3CL protease, which is specific to SARS-CoV-2 and required for it to replicate its RNA. Through this inhibition, the drug interrupts the proliferation of the virus,” says Dulcine. Protease is a class of enzymes that break the peptide bonds between amino acids in proteins. When infecting host cells, the SARS-Cov-2 virus produces a polyprotein that is broken down into smaller proteins (proteolysis), which are essential to maturation and reproduction. When the 3CL of the novel coronavirus is inhibited by the drug, the proteolysis process does not occur, interrupting reproduction.

Regarding paxlovid’s risk of toxicity, Medeiros says that theoretically, SARS-CoV-2 protease inhibitors have no effect on human cells. “I believe, however, that studies are needed to assess liver and bone marrow toxicity. Long-term studies are critical to assess adverse events and interactions with other medications.”

Supplementary approaches
Infectious disease specialists consulted by Pesquisa FAPESP emphasized that COVID-19 antivirals will not replace vaccination. “Prevention of any disease always involves a combination of factors. Just as seat belts, airbags, and ABS brakes protect motorists, masks, social distancing, vaccines, and now, specific medicines comprise our arsenal against COVID-19,” explains Alexandre Naime Barbosa, head of the Infectious Diseases Department at São Paulo State University (UNESP) and COVID-19 consultant to the Brazilian Society of Infectious Diseases (SBI) and the Brazilian Medical Association (AMB). “Vaccines reduce the individual risk of severe disease and death, but they don’t completely eliminate the chances of them occurring. For older people and immunosuppressed or unvaccinated individuals, there needs to be a treatment strategy for the early stages of the disease.”

“Another important point is that patients with mild to moderate cases of COVID-19 can shed the virus for up to 10 days after the onset of symptoms. Medications that reduce the viral load and, consequently, the virus’s shedding period, also help control outbreaks, reducing transmission of the disease,” adds Medeiros.

Another advantage of oral medication is the logistical benefits. Pills are easier to transport, distribute, store, and administer to patients than intravenous therapies, such as monoclonal antibodies created in a lab.

Next steps
MSD has already requested authorization for emergency use of molnupiravir from the Brazillian Health Regulatory Agency (ANVISA)—a result is expected in January. The company reports that it has produced 10 million treatments for sale worldwide—each treatment consists of 40 pills, 200 mg each, to be taken over a course of five days. Its production is forecast to exceed 20 million in 2022. This includes ongoing negotiations in Brazil on a potential partnership with the Institute of Drug Technology (Farmanguinhos) at the Oswaldo Cruz Foundation (FIOCRUZ). The agreement includes the possibility of future trials to evaluate the effectiveness of an antiviral for dengue and Chikungunya.

Pfizer, which at the time of writing had not yet filed a request with ANVISA, estimates that it will produce 50 million treatments next year (ten 300 mg doses of paxlovid together with 100 mg of ritonavir) and has also stated that it is negotiating with several countries to distribute the drug equitably.

Although the manufacturers have not disclosed the unit cost of the drugs, the US government is known to have paid about US$712 for each molnupiravir treatment in the first batch ordered from MSD and US$529 for each treatment from Pfizer. The two pharmaceutical companies have also signed agreements with the United Nations (UN) Medicines Patent Pool (MPP) for generic versions, which should cost around US$20 per treatment.