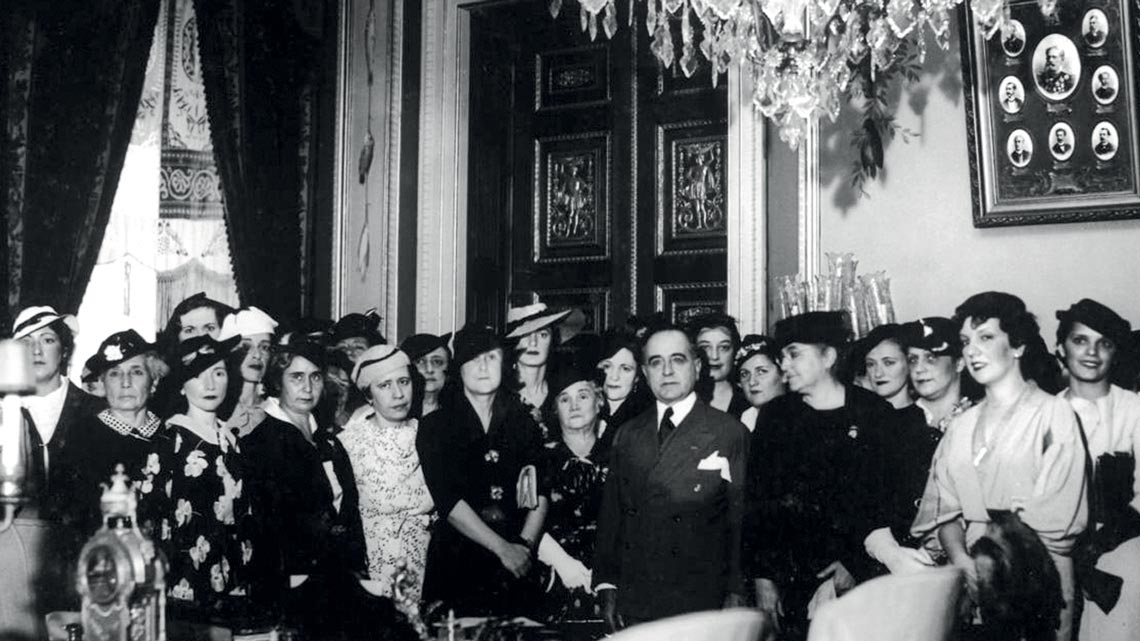 Delegates at the 3rd National Feminist Conference with then-President Getúlio Vargas, in 1936. The photo is part of a collection describing the legacy of Bertha Lutz

Two years ago, the Bertha Lutz Fonds—a set of personal and research papers authored by the famed Brazilian biologist, deputy, and feminist—was all but destroyed in a fire that devastated much of the collection at the National Museum in Rio de Janeiro. The fonds was part of a collection about Lutz (1894–1976) that was being cataloged for submission to Brazil’s national committee for the Memory of the World (MoW) Program, an initiative of the United Nations Organization for Education, Science, and Culture (UNESCO). In the wake of the tragedy, members of the committee—which was tasked with nominating documents as world documentary heritage within the program—decided to nominate the Lutz collection as “lost documentary heritage,” a category designed to preserve the memory of rare documents that have been destroyed by catastrophes or accidents, as occurred with the Bertha Lutz Fonds. During its 16 years of activity, the committee made another 110 nominations across a variety of subject-matter areas, and cataloged and tracked down numerous missing documents. Nomination is a process in which the committee recommends documents for inscription on MoW registers as documentary heritage, in an initiative that has opened new avenues for research in several fields.

“Nomination as ‘lost heritage’ draws attention to the irreversible damage that disasters like these have on national and world heritage,” says Íris Kantor, a professor in the Department of History at the University of São Paulo (USP) and a member of the committee. Despite the important service the program had provided, the Brazilian committee was suspended in 2019 under Decree No. 9759, which abolished several federal agencies, and created new rules for others. At the time it was suspended, the committee was planning to expand heritage awareness and education initiatives at government organizations responsible for items or collections included on MoW registers.

Applications for national listing were submitted by public (municipal, state or federal) and private institutions as well as international organizations. With 18 members—including representatives from heritage organizations and professionals with direct experience of fieldwork, who were elected by peers for two-year terms—the committee previously operated under the auspices of the Ministry of Culture. In 2019, however, it became an office under the Ministry of Tourism, although the committee continued to be physically housed at the National Archives, an institution administered by the Ministry of Justice. 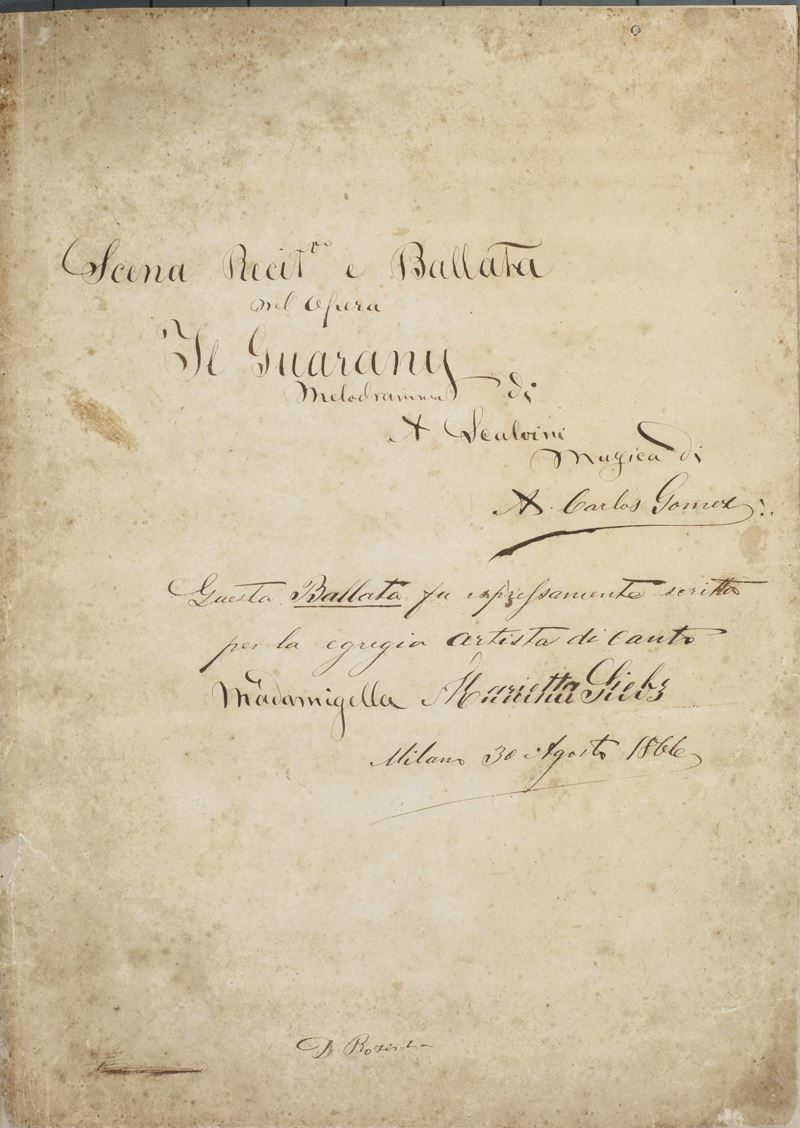 An 1866 manuscript of the opera Il guarany, by Carlos Gomes, inscribed on the MoW register in 2017 as part of collections from Brazilian and Italian institutionsNational archives

In 2012, a joint multi-year effort by Brazilian and Italian institutions to catalog the oeuvre of composer Carlos Gomes (1836–1896) led to the discovery of an incomplete score at the National Museum. The score had been thought missing from the institution since the end of the nineteenth century, but was found during the effort at the Historical Museum, among papers from the estate of emperor Pedro II, to whom Gomes had donated a part of his musical composition.

Years earlier, in 2004, the committee approved the national MoW listing of documents related to the Rio de Janeiro political police at the Public Archives of the State of Rio de Janeiro (APERJ). Historian Paulo Knauss, a professor at Fluminense Federal University (UFF) and a former director at APERJ, recalls his surprise at the sheer size of Brazil’s political police archives, with documents compiled by different repression agencies in the country between 1905 and 1983. Indeed, the Brazilian collection is one of the largest in the world on political repression. “Since then, there has been an effort to identify and catalog the entire body of political police archives in Brazil,” says Knauss.

When organizing its collection for nomination to the Brazilian MoM Program, the Public Archives of the State of Rio de Janeiro discovered that it included documentary collections from other states as well, including Alagoas, Paraíba, Bahia and Rio Grande do Sul. “The precursor agency of the Federal Police was headquartered in Rio de Janeiro, and received and archived political police correspondence and documents from all over the country,” says the researcher. Knauss notes that it was thanks to the work of the MoM committee that the existence of such a large collection of archival heritage on this topic gained notice. “This collection offers insight into issues around democracy, human rights, civil rights, and law. It has provided material for extensive research, and expanded research horizons beyond Rio de Janeiro and São Paulo, where the larger and better-known collections are kept. It has also sparked a debate about access to information and regulations on personal data, laying the foundation for the Access to Information Act,” explains Knauss, referring to a law passed in November 2011. 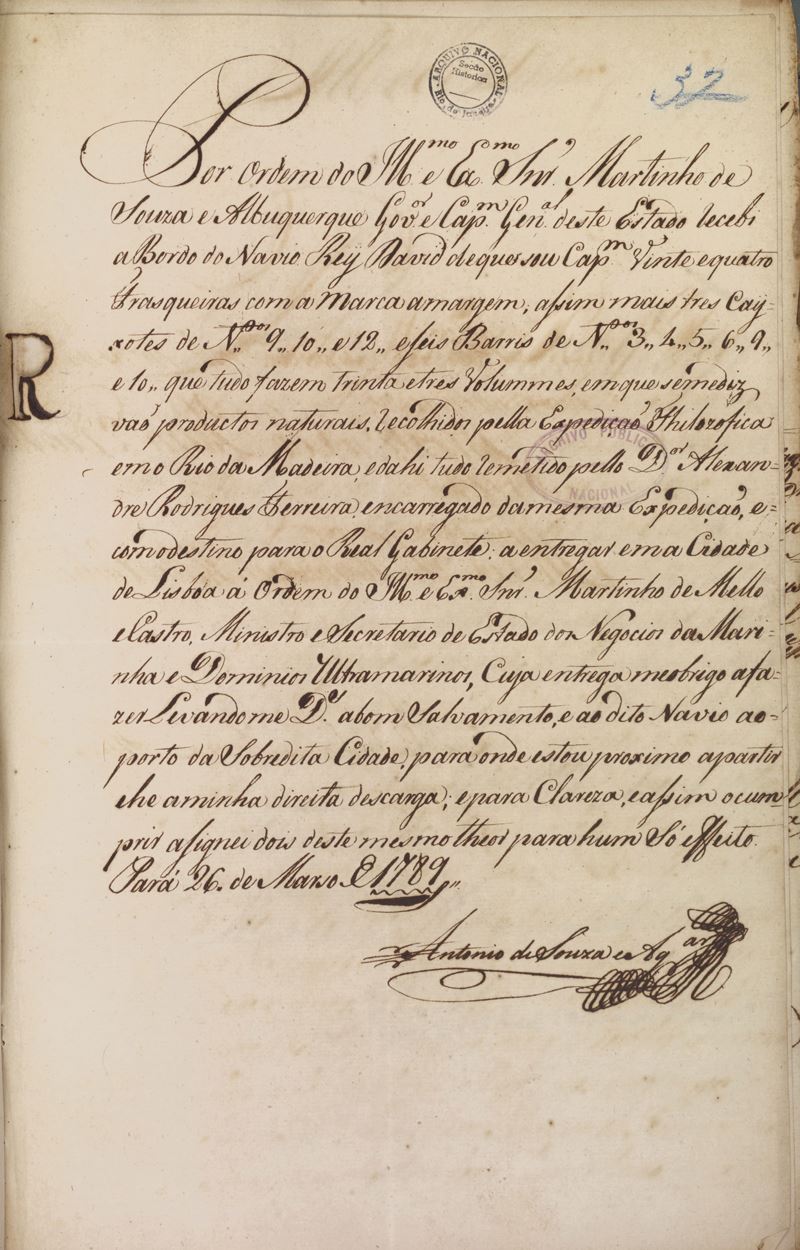 Original correspondence between the government of Pará and the Court: this letter from 1789 provides a report on shipments of natural productsNational archives

“Recent years have seen an effort to extend recognition as heritage to items other than text documents, including photos, motion pictures, and sound recordings,” says anthropologist Maria Elizabeth Brêa Monteiro of the National Archives, who is also a member of the committee. She cites as an example the Iconographic Records of the Navy Revolts (1893–1894), which were submitted for heritage nomination by the General Archives of the City of Rio, Instituto Moreira Salles (IMS), and the National Historical Museum. “The collection includes images produced by photographers such as Marc Ferrez [1843–1923] and Juan Gutierrez [1859–1897], and opens opportunities for analysis of the political forces that were vying with one another in that historical period,” she says.

Jussara Derenji, a retired professor at the School of Architecture and Urban Planning at the Federal University of Pará (FAU-UFPA), who currently heads the UFPA Museum, explains that the MoM Program was launched in 1992 as a way to mitigate the impacts from catastrophes such as wars, religious conflicts, and natural disasters on documentary heritage. Headquartered in Paris, France, the program currently has offices in around 70 countries. “The program helps to safeguard historical documents for reference in the future,” says Derenji. She notes, for example, how 20 years ago floppy disks were the gold standard for file storage, but today there are virtually no computers that can read the data they contain. “Storage media quickly becomes obsolete. To ensure that the contents of a document will be accessible for years to come, it is essential that the original object is preserved,” she says.

In 2018, 10 collections were listed on the Brazilian MoM register, including collections at different institutions describing the legacy of Bertha Lutz, one of the founders of the Brazilian Federation for Women’s Progress. Lutz also worked as a researcher at the National Museum, at a time when the participation of women in science was still limited. “The nomination of these collections by the Itamaraty Historical Archives, the National Archives, the Documentation and Information Center of the Chamber of Deputies and the Memory Center at the University of Campinas [UNICAMP] has led to the cataloging of objects that were previously stored at several different organizations. This will facilitate research on the life of this remarkable pioneer,” says Kantor of USP. The inclusion of documents that were destroyed by the fire at the National Museum should also stimulate discussion about the long-term impacts from the lost collections on research in biology,” she says. 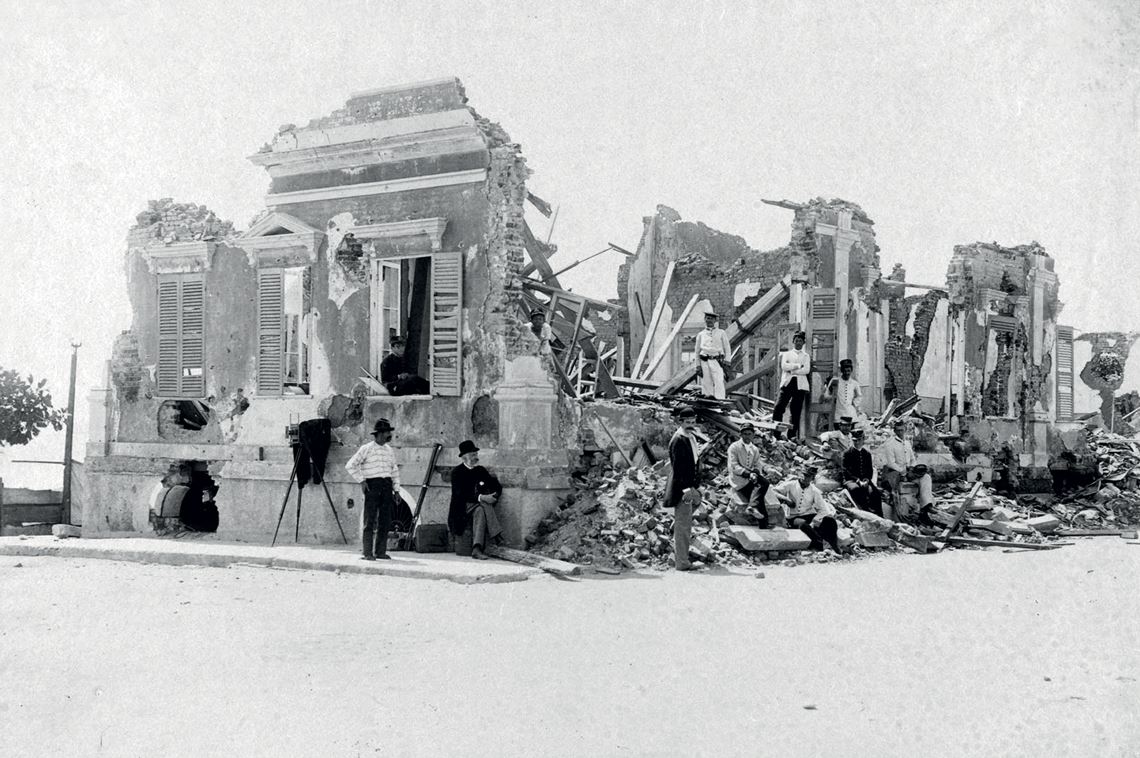 Kantor helped to develop the nomination for the atlas and map Mappa geographicum quo flumen Argentum, Paranà et Paraguay exactissime nunc primum describuntur…, which was approved for inscription by the UNESCO program in 2012. The map, belonging to National Library Foundation archives, was created in 1758 by Miguel Antônio Ciera, a military engineer from Padua, Italy, who died in 1782. Following the signature of the 1750 Treaty of Madrid, Ciera was invited to an expedition to demarcate the border between Spanish and Portuguese holdings in the watersheds of the Prata and Paraguay rivers, in South America. The nomination included a separate map titled Tabula nova, atque accurata America Australis, in Latin, with watercolor paintings of the local landscapes and wildlife encountered during the course of the expedition. “They provide a topographic, hydrographic, and toponymic record as well as data for research in ethnobotany, or the study of the relationships between the environment, plants, and indigenous populations,” says Kantor.

For the researcher, the identification and compilation of dispersed items into a cohesive set of documentary heritage has been one of the committee’s most important contributions. “One of the criteria for evaluating nominations is whether they form a complete series of a given type of document. Items must form a comprehensive collection, even if they have time gaps. In many cases, these documentary collections are scattered across different fonds, and have not been archivally described and processed,” she explains. She believes that by supporting the identification and technical description of documentary collections, the MoM Program is not only helping to give researchers and historians access to historical documentation, but also promoting a culture of preserving documentary heritage. The committee also considers criteria related to the authenticity of candidate collections, whether they are unique or irreplaceable, their rarity, and whether their preservation is threatened. Applicants must submit a management plan for the collections they submit, and ensure they will be organized and accessible to the public. “The symbolic status and visibility that collections gain from being inscribed on an MoM register facilitates access of their host institutions to funding for preservation and outreach,” says historian Hilário Figueiredo Pereira Filho, of the National Institute for Historical and Artistic Heritage (IPHAN), who in 2018 defended a thesis about the program at the Federal University of the State of Rio de Janeiro (UNIRIO). 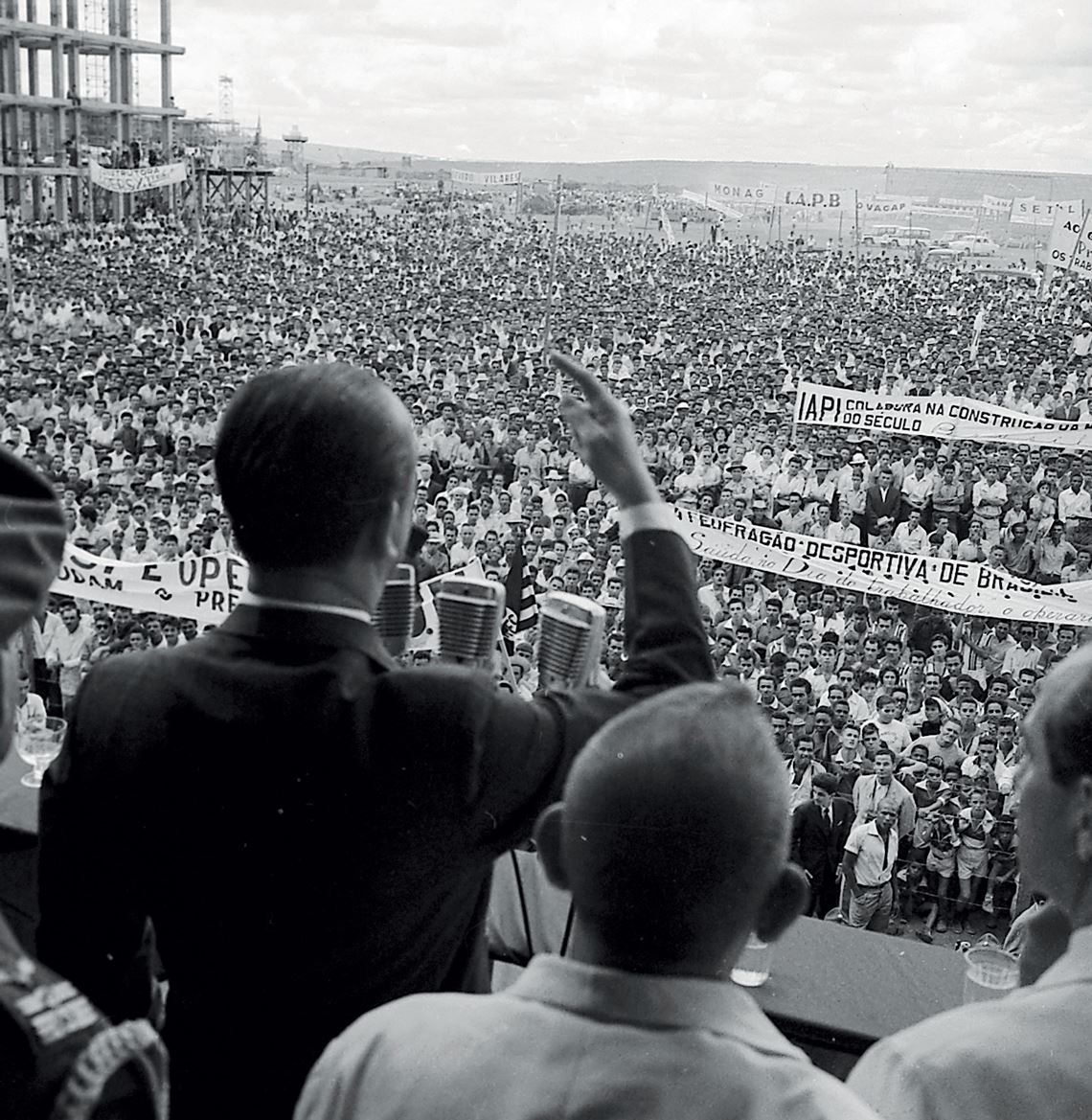 Juscelino Kubitschek delivering a speech on May 1, 1959, in Brasília: the photo is part of a collection inscribed on the Brazilian MoW register in 2010National archives

Among recent nominations, Derenji highlights a manuscript titled Relíquia da Irmandade Devoção de Nossa Senhora da Solidade dos Desvalidos – Actas 1832–1847, a collection of minutes from Sociedade Protectora dos Desvalidos in Salvador, Bahia. “Founded in 1832, this society was Brazil’s first black civil rights organization. It was created to help black slaves achieve freedom,” explains Derenji, a retired professor of architecture at UFPA and the current chairwoman of the committee—her election in 2018 was part of an effort to diversify committee activities beyond Brazil’s Southeast. She believes the minutes—which provide a record of administrative matters, the organization of religious festivals, and the strategies the association used to free and provide aid to freed slaves, such as raising funds to purchase their freedom or helping them to find new livelihoods—will help to expand research on the role that blacks played in the emancipation process.

Through mediating collaboration between public and private institutions, the committee has supported policymaking on the preservation of Brazil’s documentary heritage, says Knauss. “By recognizing collections with diverse profiles, the program has fostered interaction and collaboration among archives, libraries, and museums. The nominations it receives also provide insight into the situation of Brazil’s historical collections,” she says. The committee processed an average of 25 nominations each year before its activities were suspended—it is currently uncertain when the committee will be reinstated. Kantor, of USP, notes that a much of Brazil’s documentary and bibliographic collections have yet to be cataloged, and that continuing the program would be an essential step toward creating a culture of safeguarding, preserving, documenting, and providing free public access to the country’s documentary and bibliographic heritage.