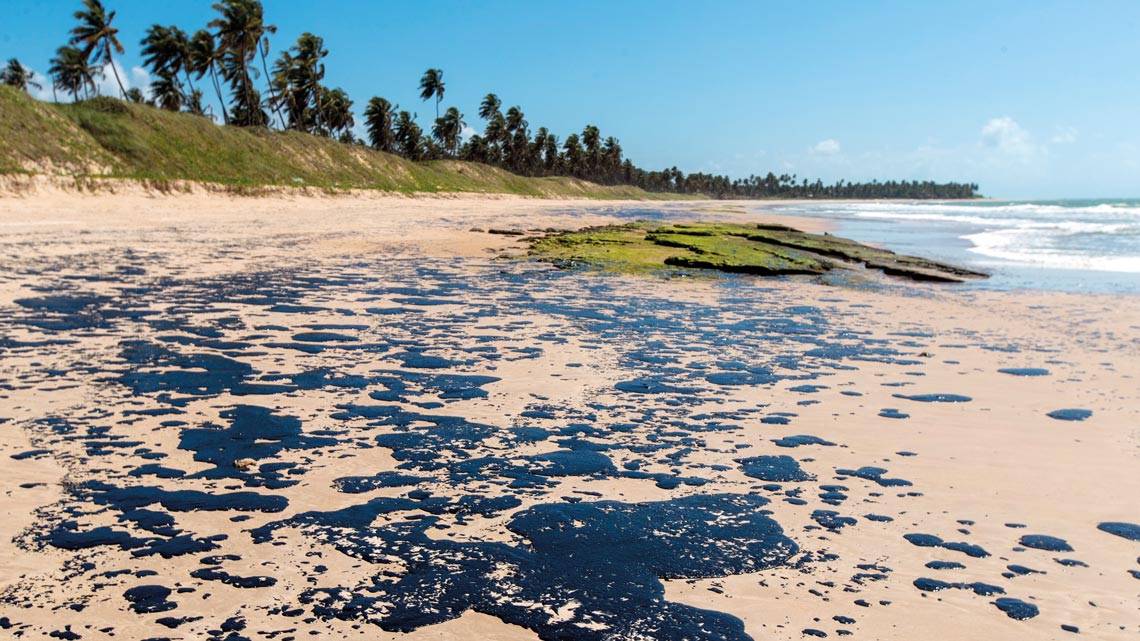 In October, Lagoa do Pau beach, in the municipality of Coruripe, Alagoas, was one of many stained by oil from the sea.

By November 18, the oil slick first spotted off the coast of Paraíba at the end of August had spread along 2,500 kilometers (km) of the Brazilian coast, an even larger area than the 1,600 km of waters and beaches contaminated in the United States as a result of an oil rig explosion in the Gulf of Mexico in 2010. The dark, smelly mixture of hydrocarbons—chemical compounds formed of carbon and hydrogen atoms—and impurities such as sulfur and heavy metals was identified in 116 municipalities and 651 locations across nine states in northeastern Brazil, as well as Espírito Santo and Rio de Janeiro.

It is the largest environmental disaster ever recorded in the country. The oil polluted beaches, estuaries, and mangroves, impacting tourism and damaging sales of fish, mollusks, and crustaceans even in unaffected municipalities—consumers are afraid to eat them. The oil was cleared from the beaches by groups of volunteers and teams from the Brazilian Navy, the Brazilian Institute of the Environment and Renewable Natural Resources (IBAMA), businesses, and municipal governments, before being stored in special deposits. There are no established methods for removing oil from mangroves, however, and the task is significantly more difficult because the material coats tree roots and stems while mixing with the water and sediment.

“The oil was most likely discarded by a ship; why, we don’t know,” says oceanographer Luiz Paulo Assad, from the Laboratory for Computational Methods in Engineering (LAMCE) at the Federal University of Rio de Janeiro (UFRJ). He was part of a team that was asked by the Brazilian Navy to investigate the possible origins of the oil slick based on information about the beaches affected prior to September 24. The researchers identified three main regions from which the oil could have arrived in early August: one about 350 km off the coast of Paraíba; another 600 km from the border between Pernambuco and Alagoas; and a third 400 km from the border between Alagoas and Sergipe.

“The possible trajectories of the slick are consistent with the patterns of ocean currents off the Brazilian coast,” says Assad. Transported by the South Equatorial Current, the oil first washed up on beaches in the states of Paraíba and Rio Grande do Norte. Part of the slick then spread to Ceará and Maranhão, while the rest moved south, reaching Alagoas, Sergipe, Bahia, and in early November, Espírito Santo. There is no way to estimate how much oil could have actually leaked and may still arrive on the Brazilian shoreline. 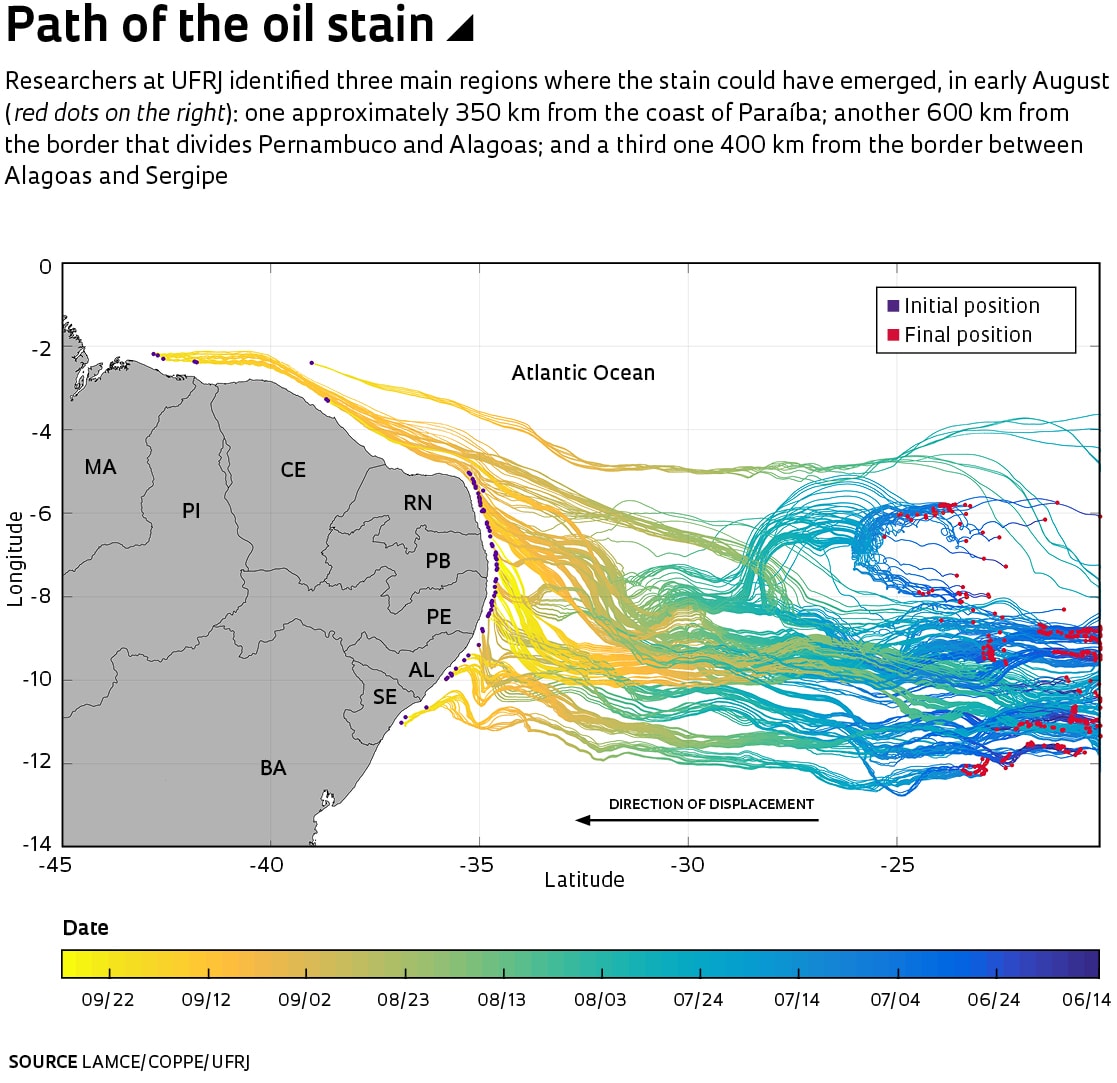 “It was only slightly degraded, meaning this oil was in the sea for just a few days when it reached the beaches,” concluded chemist Rafael Andre Lourenço, a professor at the Oceanographic Institute of the University of São Paulo (IO-USP). He found light hydrocarbons, mainly n-alkanes with less than 15 carbon atoms, in 11 oil samples from Pernambuco, Alagoas, Sergipe, and Alagoas. Because they are more volatile than their heavier counterparts, these hydrocarbons are the first to be released when oil comes into contact with seawater or air.

A team from the Geosciences Institute at the Federal University of Bahia (UFBA) analyzed the chemical composition of 29 oil samples taken from beaches in Sergipe and Bahia using gas chromatography and mass spectrometry. When compared with samples from Brazil and other countries, the greatest geochemical similarity was with oil from Venezuela. “Every oil type has its own identity, according to how it was formed,” says geologist Olivia Oliveira, director of the institute. “This type does not exist in Brazil, even in the pre-salt layer.”

On October 8, Brazilian state oil company Petrobras announced that it had analyzed 23 samples from the beaches and also found evidence that it was crude oil from Venezuela. Two days later, Venezuelan oil minister Manuel Quevedo disputed the conclusion. In an interview with news website G1, Venezuelan economist Rafael Quiróz, professor of oil economics and policy at the Central University of Venezuela (UCV), said there was no evidence that Venezuela is the only country producing this type of oil. According to Oliveira, other countries produce oils with similar physicochemical characteristics, but the proportion between organic compounds is different.

The Venezuelan hypothesis led to a search for ships that left the neighboring country and passed the Brazilian coast. In late October, the Federal Police identified a Greek ship that took this route and could have been responsible for the spill, but a team from the Federal University of Alagoas (UFAL) disputed the findings. “The ship in question passed off the coast of Paraíba two days after the spill had formed,” says meteorologist Humberto Barbosa, coordinator of UFAL’s Satellite Analysis and Processing Laboratory (LAPIS), having checked images from European satellite Sentinel 1-A. On November 17, he claimed to have identified a vessel that sailed past Paraíba in July and could potentially have caused the spill. The identity of the ship has been kept confidential. 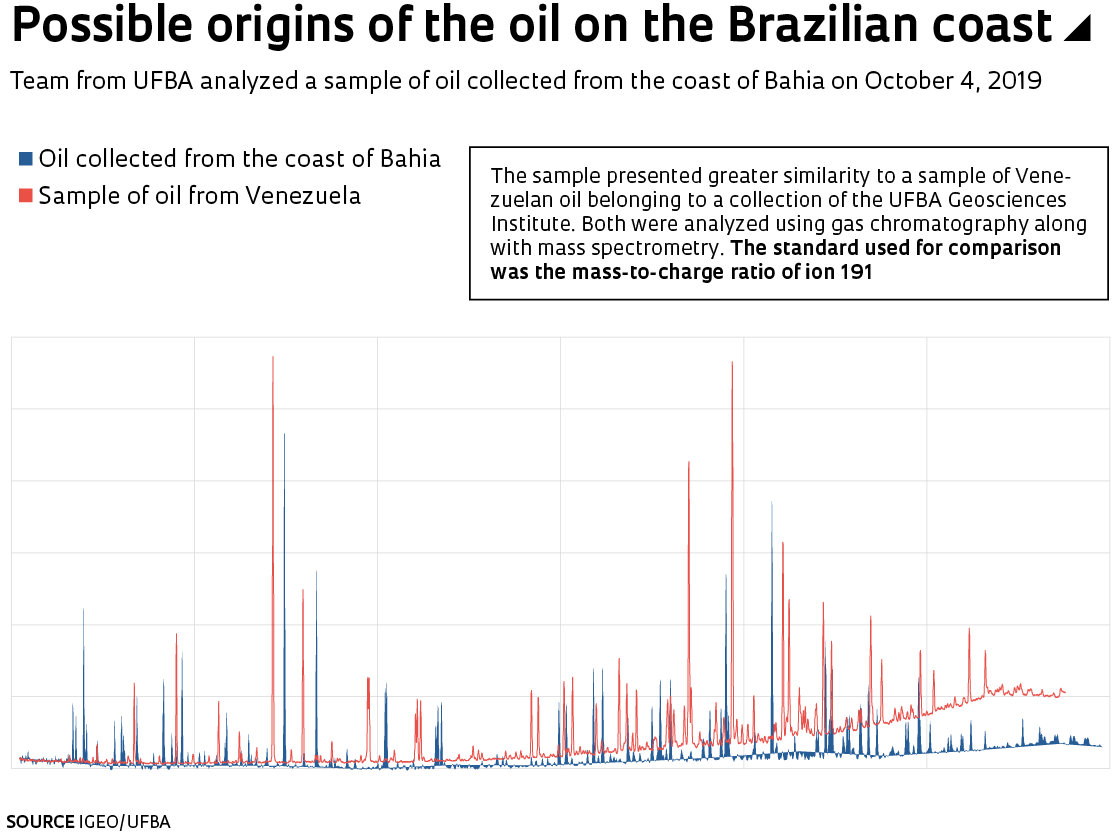 “The timing of the spill couldn’t be worse—it coincided perfectly with the breeding season of many marine animals, which stay nearer the coast when the waters are warmer between September and February,” comments UFBA biologist Francisco Kelmo. He and his research group examined 50 sea animals, including crabs and shellfish from coral areas in northern Bahia. According to the research, oil residue in the lungs, gills, and stomachs of these animals suggests that they died from the oil.

IBAMA registered 141 animals affected by the oil, mainly turtles, of which 100 had died by November 18. “Animals that survive the oil can suffer from health problems or deformities,” says Kelmo. While oil can be cleaned relatively easily from the beaches, either by hand or using tractors, in the mangroves it coats tree roots and enters crabs burrows, making it difficult to remove.

“And removing the oil is not the end of the problem,” warns sociologist Cristiano Ramalho of the Federal University of Pernambuco (UFPE). “The environmental and social impact will last for years.” In early October, he visited the small fishing communities that he has been researching since 1993, and found that sales of fish, shellfish, crabs, and oysters had dropped by at least 80%.

“Nobody is buying fish from Pernambuco,” says biologist Gilberto Rodrigues, head of UFPE’s SOS Mar Committee, created in October to organize beach clean-up operations and support fishing communities. In Pernambuco, about 30,000 people whose livelihoods depend on fishing have been directly impacted by the oil spill—in Bahia, 140,000. “Subsistence fishing families are no longer able to afford food and other basic living expenses,” says Ramalho. “Despite help from residents in other cities, they are struggling to survive.”

Call for research proposals
On October 25, the Pernambuco Science and Technology Foundation (FACEPE) issued a call for research proposals, offering R$2.4 million in funding to investigate the impacts of oil contamination on the state’s coast. The results of the process are expected to be announced in December. On November 5, UFPE issued an emergency call for research proposals to reduce the effects of the leak. A week later, through a collaboration agreement with FACEPE, FAPESP announced a call for proposals for studies into oil spill prevention and remediation (www.fapesp.br/13741). The proposals must include participants from both states, and the results of the call, issued on an emergency basis due to the severity of the incident, will be released in April 2020. “This is undoubtedly a major disaster, with damaging consequences not only in the short term, but also in the medium and long term, because recovering mangroves and coral is so complicated,” says Carlos Américo Pacheco, executive director of the FAPESP Executive Board.