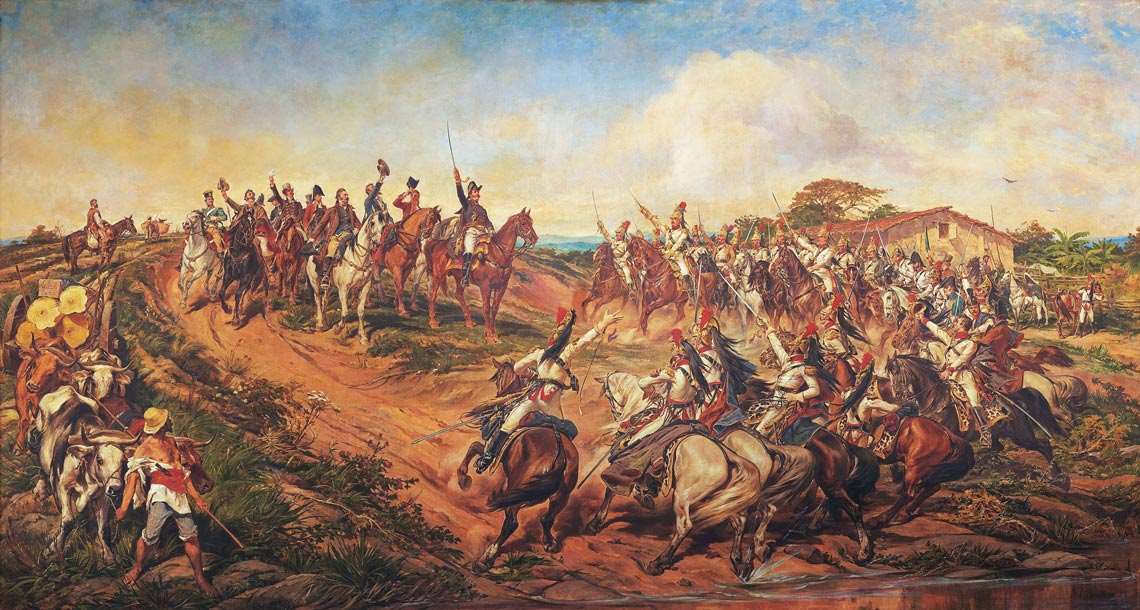 With its similar arrangement of characters, the painting 1807, Friedland by Jean-Louis-Ernest Meissonier may have been used as a general model for Independência ou morte!

The Declaration of Independence by then Prince Regent Pedro de Alcântara (1798–1834) on September 7, 1822, known today as the Cry of Independence, was among the founding moments in Brazil’s history as an independent nation. Its most emblematic representation in art is Independência ou morte! (Independence or death!), a 4.15-meter (m) by 7.60 m painting made between 1886 and 1888 in Florence, Italy. Now exhibited at the University of São Paulo’s (USP) Paulista Museum, the painting’s author, Pedro Américo de Figueiredo e Melo (1843–1905), one of Brazil’s most renowned painters in the late nineteenth century, meant it to be neither a historically accurate depiction of the event nor a fanciful depiction entirely removed from reality, as research has since revealed.

The painting drew on extensive research on Brazilian history and culture, but was also heavily influenced by European art, notes historian Michelli Scapol Monteiro. In 2019 and 2020, during a postdoctoral fellowship at MP, she visited archives, libraries, and museums in Florence and Paris, France, to find the artistic and political influences behind the painting and any references to other works and artists, a practice known as “quotation” that was common in historical paintings in that period.

“Quotations were a way to demonstrate erudition and knowledge about one’s predecessors and contemporaries,” she says. “They were a way to acknowledge the paintings that inspired the composition of one’s work.” Quotations typically came in the form of similar poses and gestures, details, or the arrangement of a scene similar to those in the quoted works. They were expected and even valued as demonstrating the artist’s ability to adapt a prior element to a new context.

But although this was commonplace in academic paintings, in the late 1800s this practice led Pedro Américo to be accused of plagiarism, especially in relation to the painting 1807, Friedland, by French painter Jean-Louis-Ernest Meissonier (1815–1891), evoking one of Napoleon Bonaparte’s (1769–1821) victories in battle. The painting, completed in 1875, features the same arrangement of main characters, groups, and cavalries. Monteiro believes that Meissonier’s painting indeed served as a general model for Independência ou morte!, and that other details were taken from 1807 and other works by French and Italian painters.

In a speech delivered in Lyon, France, in 1880, Pedro Américo argued that his use of quotations was not imitation and did not imply a lack of originality, but rather reflected a continuum of progress in artistic expression. But the vanguard artistic movements in the late nineteenth century, such as Impressionism, valued originality and a departure from the traditional practice of quotation and demonstrating artistic erudition. “Pedro Américo made Independência ou morte! in accordance with the artistic conventions of the time as he sought to gain entry into European artistic circles,” says Monteiro. Florence, with its myriad art studios, was the ideal place to achieve this. “In Florence, as I browsed through Pedro Américo’s personal collection, currently in the hands of his grandson, Giampaolo Montesi, I found engravings, photographs of horses, and information about historical fashion that he used as a source of reference for the painting.” “He clearly made an effort to make the painting as realistic as possible, as other artists in the periods did,” says Monteiro. His attention to detail in depicting people, apparel, and animals was observable in previous paintings, such as Batalha do Avaí, dated 1877, showing one of the battles of the Paraguayan War (1864–1870), and was also seen later in Tiradentes esquartejado, a painting he made in 1893, during the Republican Era, which failed to please the establishment as the author expected.

According to Monteiro, Pedro Américo was a frequent guest at the court of Dom Pedro II (1825–1891) and was also known to exchange correspondence with Princess Isabel (1846–1921). Dom Pedro II and Queen Victoria (1819–1901), of England, saw his painting at Accademia Reale delle Belle Arti, in Florence, where it was exhibited for the first time in 1888. In Brazil, the painting was presented to the general public in 1895 during the opening of MP. 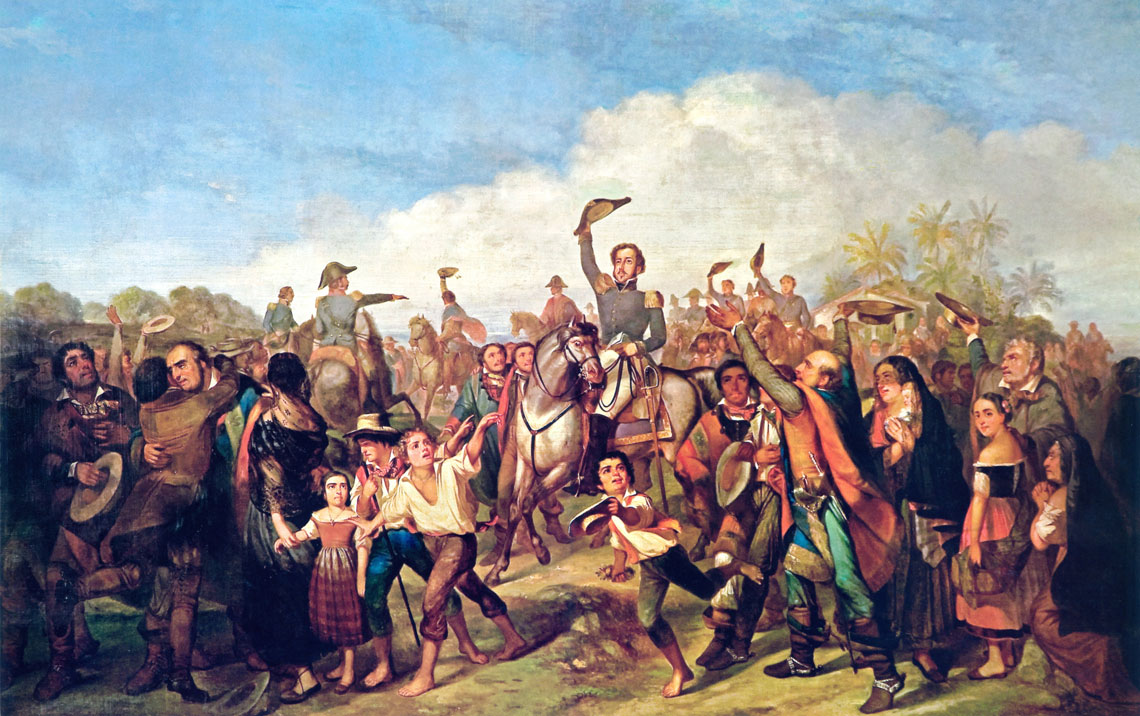 Pedro Américo didn’t mean for his painting to be an exact depiction of the event. He knew that the prince’s entourage was not riding horses, but mules—more suited to their journey over the hills of Serra do Mar. There were not as many people in his company. Nor were they wearing formal attire, unsuited as it would have been for the nature of their journey and the climate. “A painter draws inspiration from, but is not a slave to, historical reality,” Américo said in his defense.

Without abandoning artistic realism, Pedro Américo gave the Cry of Independence a solemn and grandiloquent air. His work was typical of nineteenth-century historical painting, a genre that was popular among movements seeking nationalist legitimation. In this genre, painters often included elements of the actual event—such as the members of Dom Pedro’s entourage—while depicting them through the lens of their artistic imagination.

The political context was important: the painting was commissioned by the São Paulo government to decorate the Ipiranga Monument building, which was finally completed in 1890 after five years under construction, at the exact spot where the Declaration of Independence is said to have taken place. “São Paulo’s politicians wanted to promote their state as the nation’s birthplace,” says Cecília Helena de Salles Oliveira, a historian at the School of Philosophy, Languages and Literature, and Humanities at the University of São Paulo (FFLCH-USP), who also holds a position at MP. “The monument was built as a tribute to the founder of the Empire and to the monarchy, and the primary goal in commissioning Pedro Américo’s painting was to play up the role the monarchy played in early nationbuilding.” The artist’s stylistic preferences were not at odds with the wishes of the painting’s commissioners. “Instructions on the painting were given by conservative politicians, who wanted a work of art that was consistent with the general principles of historical painting,” notes Oliveira.

Pedro Américo tried to exhibit his painting at the Exposition Universelle of 1889 but, lacking funds to adequately transport the painting, the committee responsible for building the Ipiranga Monument decided against it. “He likely wanted to show the painting to Meissonier, then chairman of the trade fair’s panel of judges for paintings and drawings,” suggests Monteiro. Four years later, Pedro Américo was able to exhibit his painting in the Brazilian Pavilion of the World’s Columbian Exposition, a fair held in Chicago to celebrate the 400th anniversary of the discovery of America. When she investigated the press coverage of the event, Monteiro found that Independência ou morte! had received the highest acclaim among the works produced by Brazilian artists, and had been reproduced in several newspapers in Chicago. Caipiras negaceando, by José Ferraz de Almeida Junior (1850–1899), was exhibited at the fair’s Fine Arts Palace.

Moreaux Versus Pedro Américo
“The most widely known painting of the Declaration of Independence in the nineteenth century was one made by French painter François-René Moreaux [1807–1860] in 1844 on commission from the Brazilian Senate,” says Maraliz de Castro Vieira Christo, an art historian at the Federal University of Juiz de Fora (UFJF). “With the political fragmentation of the regency period and the subsequent “coming-of-age coup,” it was essential to establish continuity between Brazil’s Independence and the reign of the young Dom Pedro II, who had ascended the throne three years earlier.” With this in mind, she says, “Moreaux chose to depict the Declaration of Independence as a civilian gathering rather than a conflict, with the troops shown in the background.”

For Oliveira, the political goal of Moreaux’s painting was to “promote an image of the monarchy as a regime enjoying popular support and accepted as expressing society’s desire for freedom.” In contrast, Pedro Américo produced “a painting that depicted the founding of the nation as an epic event,” says Oliveira, and its aim was to “immortalize the place, September 7, and Dom Pedro I.” Monteiro draws attention to the different ways the prince is depicted in the two paintings: in Moreaux’s, Dom Pedro I is surrounded by cheering people and above him is an area of light, possibly to suggest that the founding of Brazil was a divine act. Pedro Américo’s painting “denotes heroism and emphasizes human rather than divine agency, seeking to show that the monarch played a key role in Brazil’s Independence.”

Independência ou morte! superseded its predecessor as the most well-known depiction of the Declaration of Independence among Brazilians, especially after the wide publicity it received following the centennial celebrations in 1922. “The painting was featured on a wide variety of items, such as fans, rugs, stamps, and medals. It began to be seen as a factual depiction rather than an artistic representation of the event,” says Christo of UFJF.

For Oliveira, the painting gained popularity through the efforts of the Republican Party in São Paulo and intellectuals to associate Brazil’s independence with the state of São Paulo. “São Paulo was advertised as the location where the nation and the new Republican regime were founded,” she says. “With the expansion of the public education system and investments by the Federal and state governments in a combination of art, culture, and political propaganda, the painting soon became widely known.” For decades, the image dominated Brazil’s history textbooks.

“Pedro Américo was very deliberate in composing the painting, as very little rework was done,” says Márcia Rizzutto, a physicist at USP. She and fellow USP physicist Pedro de Campos examined the painting’s pigments using three different techniques: X-ray fluorescence and Raman spectroscopy, to distinguish the original pigments from others added in later restoration work; and infrared reflectography, to identify under layers and rework. They found that only a few minor details were changed between the draft and the final painting, such as horses’ and riders’ ears, flowers being removed, horses’ hooves being repainted in different positions, and the signature, which was initially placed at the top of the painting and later put in a more visible position near the frame at the bottom.