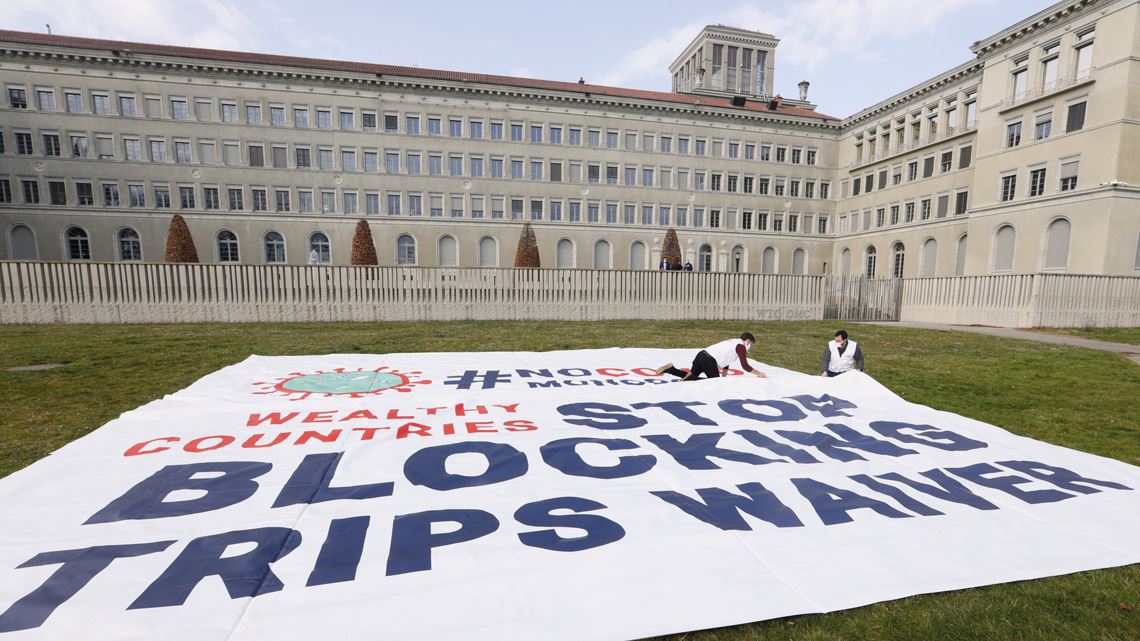 The slow rate of COVID-19 vaccination worldwide, especially in low- and middle-income countries, has led to a discussion about waiving vaccine patents. Suspending intellectual property rights for pharmaceutical products is always a controversial issue that generates heated debate, but the practical outcomes do not usually gain much in the way of public attention.

When it comes to SARS-CoV-2 vaccines, experts argue that institutional, technological, and production barriers would need to be overcome in order to translate compulsory licensing into a real increase in production and supply. The first hurdle is political. In October 2020, India and South Africa asked the World Trade Organization (WTO) to recommend a temporary waiver of intellectual property rights for COVID-19 drugs and vaccines. The World Health Organization (WHO) and more than 100 low- and middle-income countries supported the initiative. Brazil was a dissenting voice in this group, aligning itself with rich nations who were against the measure. Negotiations are ongoing.

Every country can take its own stance on the issue, but a joint approach, with the support of the WTO, would significantly increase bargaining power. The WTO Agreement on Trade-Related Aspects of Intellectual Property Rights, known as TRIPS, states that before a country or group of countries can enact compulsory licensing for a patent, they must first establish an attempt to negotiate with the owner of the intellectual property (IP). If an agreement is reached, an IP waiver is set for a specified period of time.

“A joint diplomatic solution involving several countries or with the WHO allows the applicants to negotiate better commercial conditions, production agreements, and technology transfers,” summarizes pharmacist and biochemist Soraya Soubhi Smaili, dean of the Federal University of São Paulo (UNIFESP). If no agreement is reached, unilateral compulsory licensing obliges the applying country to establish its own means of obtaining the product, whether through its own technology and production or from international suppliers.

In the past, Brazil took both routes to obtain drugs for AIDS patients. In 2001, then Brazilian minister of health José Serra started the process of waiving patents on the drugs Efavirenz and Nelfinavir, owned by Merck Sharp & Dohme and Roche, respectively. The companies came to an agreement, however, and temporarily lowered the prices of the products. In 2007, minister of health José Gomes Temporão was unable to extend the agreement with Merck and thus waived the patent for Efavirenz.

But the current situation is much more complex. In 2001 and 2007, the global production capacity of AIDS drugs was greater than demand. Today, production of COVID-19 vaccines is below the demand. As a result, importing raw materials is a major challenge.

In Brazil, there are three laboratories capable of manufacturing vaccines: the Butantan Institute in São Paulo, the Oswaldo Cruz Foundation (FIOCRUZ) in Rio de Janeiro, and the Ezequiel Dias Foundation (FUNED), linked to the Minas Gerais State Health Department. FUNED has a limited production capacity, FIOCRUZ is already committed to the Oxford/AstraZeneca vaccine, and Butantan to CoronaVac, developed by Chinese company Sinovac. According to specialists, establishing new production chains in Brazil would require significant public investment and would take time to complete. Construction of a new plant to manufacture CoronaVac doses at Butantan began in November 2020 and is expected to be finished in October, having cost an estimated R$180 million. 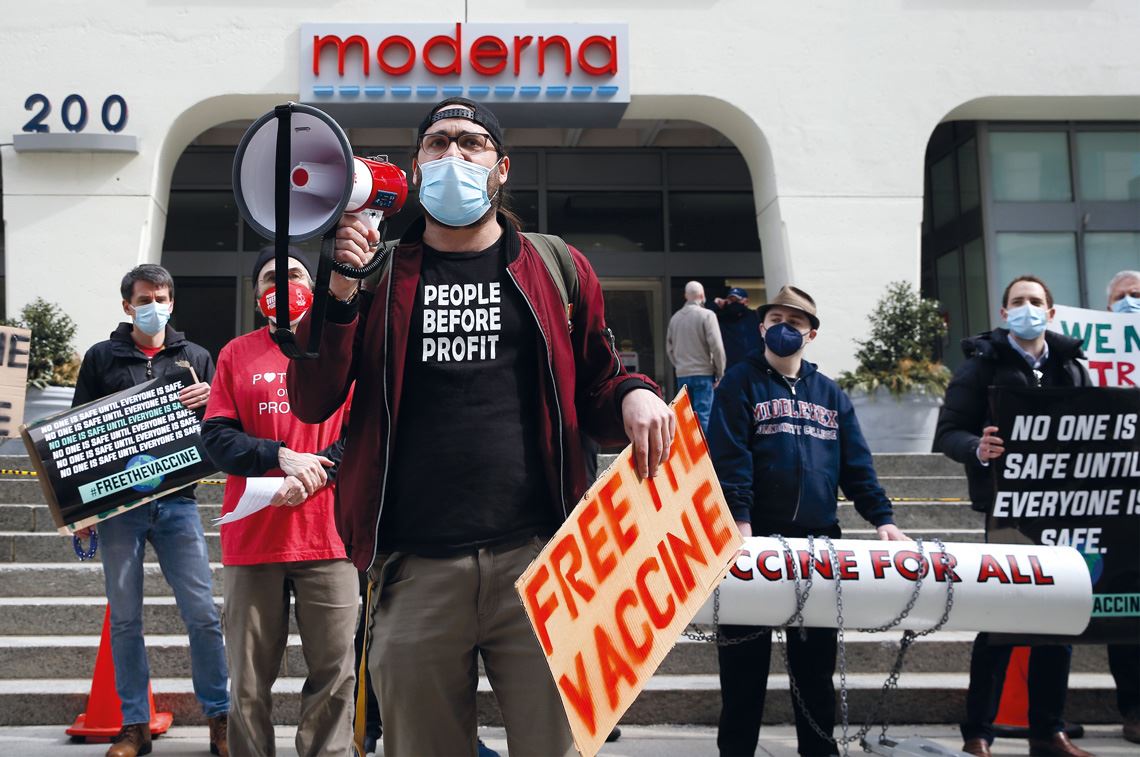 Dimas Covas, director of the Butantan Institute, and Nísia Trindade Lima, president of FIOCRUZ, recently told the Brazilian senate that their institutions do not have the infrastructure needed to absorb new production demands and generate faster vaccine access if the patents are waived. In the private sector, there are no pharmaceutical laboratories in the country with the technological know-how to produce the vaccines, and the companies that produce veterinary vaccines would need to significantly improve their manufacturing processes to meet the strict health & safety requirements of producing human inoculants.

Despite these obstacles, Smaili has advocated for a change in Brazil’s position on the matter and support for the Indian and South African initiative to waive the patents on COVID-19 vaccines. India, meanwhile, could actually benefit from a patent waiver, since it has the necessary production infrastructure and is even exporting vaccines.

Global patent flexibility could lead to international investment in new means of production and increase global vaccine supply, facilitating access for Brazil. It would also enable more countries to manufacture the vaccine. This happened to some extent when the patents were waived for AIDS drugs in Brazil and India in the first decade of this century.

The idea of suspending IP rights for COVID-19 vaccines is particularly important due to the likelihood that repeat immunization will be needed over the coming years. “It is an important card to have on the table, capable of considerably increasing the bargaining power of developing countries in international negotiations on vaccine access,” says the UNIFESP researcher.

According to Smaili, if the measure results in more accessible trade agreements, as happened in 2001 with the drugs used to fight AIDS, it will be worth it. The UNIFESP dean believes that Brazil must try to negotiate a solution, but to have any credibility in this diplomatic dispute, waiving patents to allow for local production has to be perceived as a real possibility. To achieve this, the country must increase investment in science and technology and show that is ready and able to act, should a solution be found.

Krishna Udayakumar, founding director of the Duke Global Health Innovation Center at Duke University, USA, says that vaccine production is a complex process that requires specialist knowledge and effective supply chains. “It is unlikely that waiving patent rights alone will lead to a significant or rapid increase in the manufacture of vaccines,” he suggests.

He believes a lack of organization between public and private sectors can create inefficiencies in the process, with uncoordinated competition for scarce resources and raw materials. “There are examples of successful public-private partnerships that lead to better health outcomes for everyone,” Udayakumar told Pesquisa FAPESP.

No country has yet adopted compulsory licensing for COVID-19 vaccine patents. The hope is that other solutions may be agreed with the WTO

Elizabeth de Carvalhaes, CEO of the Industrial Association for Pharmaceutical Research (Interfarma), highlights that there was an immense effort by the industry to develop fast solutions to the pandemic, which was only possible thanks to the innovation system supported by intellectual property rights. “Relaxing patents can negatively affect confidence in the intellectual property system, which works well and allows the industry to establish partnerships with universities, research centers, and other companies,” she says. Carvalhaes also argues that the pharmaceutical industry is already creating partnerships with companies from several countries to increase production capacity.

Another factor restricting COVID-19 vaccine production and availability is the limited access to raw materials, says Nelson Mussolini, president of the Pharmaceutical Products Industry Union (Sindusfarma). “Supply is conditioned not only on structural capacity, but also on the production limits of Active Pharmaceutical Ingredients [APIs], the main ingredient of vaccines,” he says. Suspending patents, in the Mussolini’s opinion, will not result in greater vaccine supply, but in a greater joint effort between governments, research centers, and pharmaceutical companies.

Author of the master’s thesis “A quebra de patentes de medicamentos como instrumento de realização de direitos” (“Breaking drug patents as an instrument for the realization of rights”), which was the basis of the book Patente de medicamentos (Drug patents) (Juruá, 2010), Matheus Ferreira Bezerra, a professor of law at the State University of Bahia (UNEB), believes that compulsory licensing should not be used to justify a lack of investment in research and public health. “A country committed to health should not limit itself to compulsory licensing—it should first concern itself with investment in the sector,” he argues.

The researcher, however, sees waiving the patents for vaccine APIs as a viable way of producing them on a large scale in Brazil. “The vaccines depend on these raw materials. Without them, production and immunization speed are restricted,” he says. “Being able to independently produce the vaccine at all stages is essential to protecting the health of the population.”

In response to requests for a comment for this article, the Brazilian Ministry of Foreign Affairs (MRE) reaffirmed the federal government’s position against waiving IP rights. It is a mistake, according to the MRE, to assume that a patent waiver would result in faster vaccine and drug production and distribution. “A patent typically contains a description of the technology, which alone is not enough for a manufacturer to replicate it. Such an endeavor takes years.”

There are currently five bills in the Brazilian Chamber of Deputies and one in the Federal Senate in favor of compulsory licensing for patents hoping to force the federal government to review the stance it has taken with the WTO. “The world will know that the Brazilian Congress supports a patent waiver. That puts pressure on the government. We intend to demand that Brazil change its position,” says senator Paulo Paim (PT-RS), author of Bill No. 12/2021.

In April this year, Dias Toffoli, a minister of the Federal Supreme Court (STF), overturned a section of Brazil’s Industrial Property Law that he claimed could be interpreted as suggesting that patents were valid indefinitely. Article 40 of the law allows a patent to be automatically extended if the National Institute of Industrial Property (INPI) takes more than 10 years to analyze the patent application. Initiated by the Attorney General’s Office (PGR), the action was set to be analyzed by the courts. The PGR says removing the paragraph in question could facilitate the development of COVID-19 treatments.

So far, no country has adopted compulsory licensing for COVID-19 vaccine patents. The hope is that other solutions may be agreed within the scope of the WTO. Specialists argue that ensuring global and equal access to COVID-19 vaccines is the best way to interrupt the spread of a virus that has already infected around 150 million people worldwide and caused 3.1 million deaths, with major consequences for the global economy. A study by the International Chamber of Commerce (ICC), a non-governmental organization based in Paris, has predicted that if governments in more developed nations fail to guarantee access to COVID-19 vaccines for developing economies, global losses could reach US$9.2 trillion. Half of this impact will be borne by the rich countries themselves, which in general have ordered vaccine does in far greater numbers than their populations require.