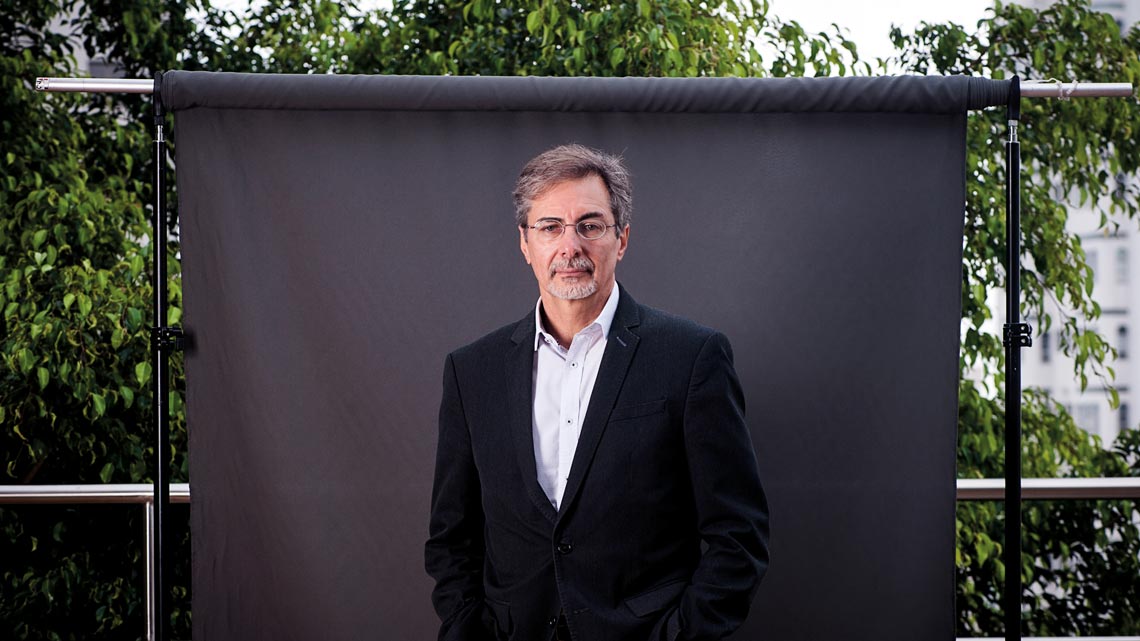 Paulo Moutinho has experienced the Amazon in an uncommon way: he traveled 1,200 kilometers (km) of the Trans-Amazonian Highway by bicycle. During this trip and others, he received death threats, was welcomed, and saw both poverty and happiness. He talked to prospectors, farmers, and indigenous and riverine people, looking for elements that would allow him to conceive the development that is both possible and necessary for the region.

One of the founders and a researcher at the Amazon Environmental Research Institute (IPAM), a nongovernmental organization (NGO) founded in 1995 and focused on integrating scientific research with the social needs of the region, he did his postgraduate research on ants at the University of Campinas (UNICAMP) and was a professor at the Federal University of Pará (UFPA).

Moutinho lives part time in Brasília, where IPAM has an office, and part time in Belém, where the organization is headquartered. In this interview, given on October 9 in São Paulo, he advocates recognizing the wealth of the forest—from an economic standpoint—and looking for ways to combat environmental hopelessness.

Two years ago you cycled 1,200 kilometers across the Amazon. What did you learn?
We covered the unpaved stretch of the Trans-Amazonian Highway. One of the cyclists was Osvaldo Stella, a scientist at IPAM who, 25 years earlier, had cycled across the same stretch—from Itaituba, Pará, to Humaitá, Amazonas. North American Chris Cassidy, who was head of the team of astronauts at NASA [National Aeronautics and Space Administration], also joined us. The stretch in question illustrates how land is used in the Amazon: heavy mining activity, illegal logging, extensive but low-output livestock production, indigenous lands, protected areas, and, finally, soybean fields. Twenty-five years ago, the Trans-Amazonian Highway was only a trail at certain points—cars could almost not drive it—but deforestation was already significant. We noted that the degradation of the forest continues today, without generating any returns. But with more resources and technology, this destruction has accelerated even further.

Is it possible to develop the Amazon and improve the income of the population while keeping deterioration at a minimum?
The solution for the Amazon lies in integrating the resources of the region and the services it provides. It is critical to add value to the standing forest; there could be a way to compensate people. At the same time, we need to increase efficiency in the field with agriculture that is more sustainable and more productive. The third point relates to livestock: increasing production, with higher numbers of animals per area. Brazilian society has already proven that it knows how to preserve the forest and reduce its destruction. We accomplished this from 2005 to 2012, when the deforestation rate fell by 80%. In that same period, we doubled meat and grain production in the Amazon.

Is it possible to reconcile the fight against deforestation, traditional lifestyles, and rural development?
Yes; they all depend on one another. The Amazon rainforest acts as an air conditioner for the planet. It is storing a decade’s worth of global emissions; deforestation would cause the carbon dioxide to get into the atmosphere, aggravating global climate change. The forest also functions as an enormously important, giant irrigation system for agribusiness, whose growth is a priority. Production would not be the same without the forest. So it is not a purely environmental issue, but an economic one as well.

What elements of climate change have you noticed over the last 30 years?
In the Xingu Indigenous Park, several studies indicate an ominous combination. Global climate change is associated with the El Niño phenomenon, which has been getting increasingly longer and more intense, and has been causing significant drought in the region, further boosted by deforestation. With both elements combined, some heavily deforested areas have become over 1 degree Celsius [°C] warmer. It doesn’t seem like much but, in terms of climate, it’s significant. The difference in temperature between forested and deforested areas ranges from 6 to 8 °C on average. The rainy season is two weeks shorter. This is very relevant for soybean crops, as 95% of the country’s agriculture is not artificially irrigated and depends on rainfall. In 2016, deforestation was significant and there was a severe drought. Soybean growers had to plant their crops seven times, at a huge cost, and there was simply no rain. That is the scenario going forward if we do nothing.

How should public forests be managed?
These lands belong to the government—state or federal—and they are in limbo. The government won’t determine what these areas are for. The Public Forest Law, passed by Congress in 2006, says these areas must remain forests, and remain public. But until the government determines whether they will be preservation areas, APAs [Environmental Protection Areas], national parks, or indigenous land, they are in the hands of land-grabbers. Deforestation has grown through the theft of a legacy that belongs to all of us.

Does it all depend on the decisions that need to be made?
We can’t keep waiting for the government to do something. The reduction of deforestation between 2005 and 2012 was due to four fundamental factors: an organized scientific society providing information, the engagement of social movements, NGOs defending projects, and, moreover, political will. How do you replace political will, which we don’t currently have? The market has to start demanding it. “I won’t do business with you because you’re illegally clearing lands, and there is slave labor on your farm.” This movement exists because there are risks to businesses if things remain as they are.

What do you consider most pressing in terms of climate and environmental issues?
It is urgent that we think of a new education paradigm. At IPAM, we have been working on a project that we call “climate citizenship.” What will it be like to be a citizen on a planet that is undergoing—or has undergone—global warming? What citizenship skills do we need to teach our children so they can face what’s coming? How will they deal with large numbers of migrants fleeing droughts—something that has already been happening? New Zealand has been welcoming residents from the Tuvalu archipelago, which is being overtaken by water. What about when it happens to the people from Africa, or from the northeastern region of Brazil? How can we educate them now so they can make decisions in the future?

And how can these issues be approached in education?
We need to start movements as states, as departments of education, and as a society. Without an education that includes climate citizenship, we raise young people that have no hope. My two children say they don’t want to have children of their own because they don’t know what kind of a planet we’re going to leave behind for them. The message of climate citizenship is that it is a serious problem, but there is hope if we start to change now.