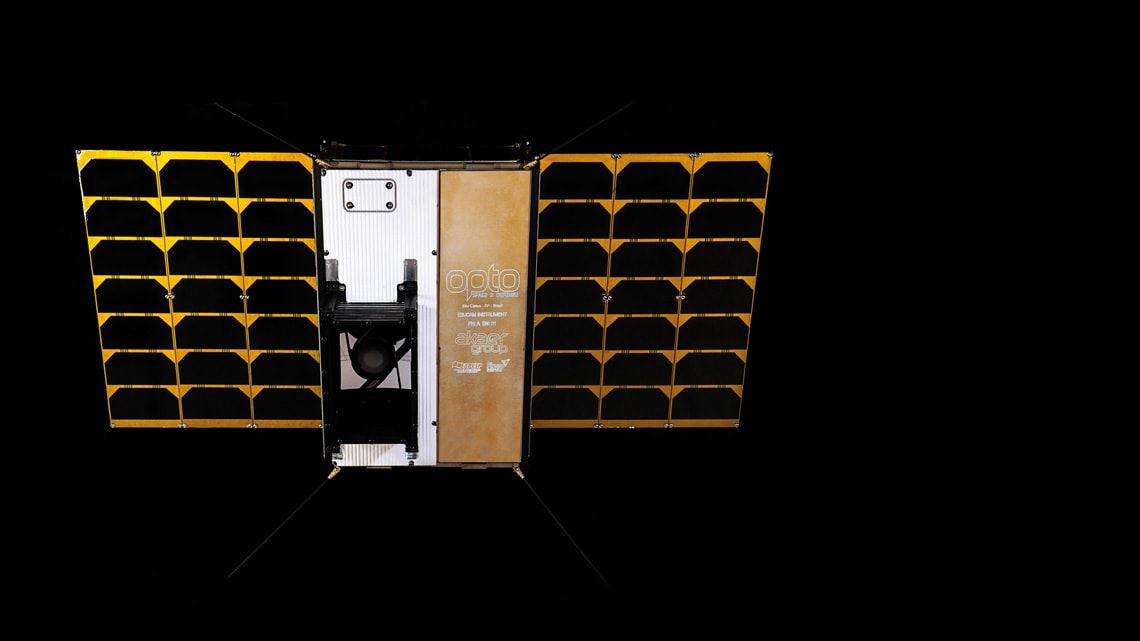 VCUB1 nanosatellite prototype with the camera in the center

A space camera designed to take high-resolution pictures of Brazil’s national territory is being tested in the laboratories of the Akaer Group, an aerospace company based in São José dos Campos in the state of São Paulo. Named E3UCAM, the camera will be mounted on the Earth observation satellite VCUB1, which is being built by Visiona Tecnologia Espacial, a joint venture between Telebras and Embraer’s Defence and Security division. If all goes as planned, the satellite will be launched into Earth orbit by mid-2020. VCUB1 will be positioned 530 kilometers (km) from Earth and will fly over Brazil every 90 minutes.

Work on the camera began two years ago by the engineering arm of Opto Space and Defense (formerly Opto Eletrônica) and Equatorial Sistemas, two companies in the Akaer Group. With an optical system formed by three mirrors, the camera will capture images of the Earth’s surface with a resolution of 3 meters (m)—in other words, each pixel (the smallest individual point that composes a digital image) will cover an area of 9 square meters (m2), clearly showing objects of certain dimensions, such as a pickup truck.

More accurate focus
The development of E3UCAM was funded by FAPESP and the Brazilian Funding Authority for Studies and Projects (FINEP). Five projects approved as part of an agreement between the two institutions under the program Research for Innovation in Small Businesses, RISB (PIPE, in the Portuguese acronym) were awarded a total of R$5.2 million. One of the projects aims to develop a mechanism for adjusting the focus using temperature control. “The ground crew remotely heats or cools a device on the camera that controls its focus, enabling it to capture more accurate images. Most cameras embedded in satellites do not have this thermally controlled focus mechanism,” says Ghizoni.

Another important feature is that the device can correct diffraction—an undesirable but common phenomenon that distorts images taken by space cameras. “We used a computational method known as deconvolution to improve image quality by reducing diffraction,” says Equatorial’s executive director, noting that the camera will provide images in four of the seven spectral bands (green, red, blue, and near-infrared bands). A spectral band is the interval between two wavelengths in the electromagnetic spectrum. Using different spectral bands, which act like a kind of color filter, helps generate more detailed images of the landscape. Most cameras photographing Earth from space use these four spectral bands. 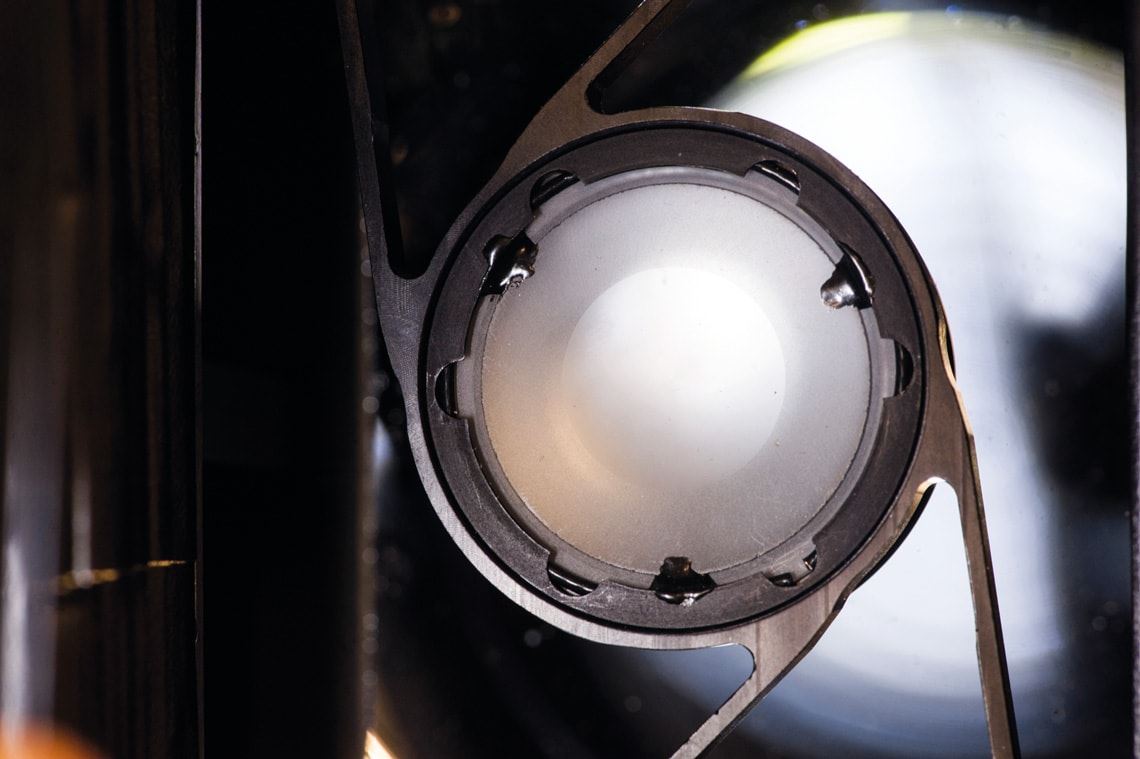 Miniaturization
Electrical engineer Marco Chamon, general coordinator of space engineering and technology at the Brazilian National Institute for Space Research (INPE), says one of the challenges when developing the camera was the need to miniaturize its systems. VCUB1 is a nanosatellite known as a CubeSat—a small, cube-shaped research satellite (see Pesquisa FAPESP issue nº 219). VCUB1 measures just 30 centimeters (cm) long, 20 cm wide, and 10 cm high. Smaller than a shoebox, the camera built by Akaer will occupy half of this space (see infographic).

According to Fernando Ferraz, the FAPESP projects were fundamental to Akaer’s development of the new technologies that enabled the creation of such a compact camera with a modular architecture designed for nanosatellites. Visiona is the first company to purchase the camera, which is also being offered to other interested parties in Brazil and abroad. The device costs approximately US$400,000 (R$1.6 million).

Akaer’s camera is not the only technological innovation on Visiona’s nanosatellite. The satellite itself, the first to be entirely designed and built by a Brazilian company, is also an innovative design. According to the company, the satellite will serve as a platform for testing space technologies that could be used in future missions by the Brazilian Space Program; one such technology is its attitude and orbit control system (AOCS), which includes the first satellite guidance software developed in Brazil. One of the purposes of this system is to correctly and accurately focus the camera on the target area.

These systems are sensitive technologies that are rarely shared between nations. “Having mastered this technology, Brazil is ready to create the first fully Brazilian satellite, thus integrating industry and academia in the high-tech sector,” said João Paulo Campos, CEO of Visiona, which is based in the São José dos Campos Technology Park.

Visiona’s nanosatellite program, which has a budget of R$14 million, includes cooperation with INPE, which has vast experience in satellite development. The agency’s engineers provide support in areas such as systems engineering, assembly, integration, and satellite testing. The company is also partnered with the Brazilian Agency for Industrial Research and Innovation (EMBRAPII), which partly funds the program, and the SENAI Institute for Innovation in Embedded Systems, based in Florianópolis in the state of Santa Catarina.

The latter was responsible for the development of the ground station and the software that will integrate the onboard computer with various embedded components, including the optical camera. SENAI Institute for Innovation in Embedded Systems also helped develop the sensors that will remain on Earth to receive data from the satellite. In addition to the camera designed by Akaer, the VCUB1 satellite will be equipped with a system to collect hydrometeorological data such as rainfall, atmospheric pressure, and river levels.

New space
VCUB1 is part of a new generation of small satellites that fall under the NewSpace philosophy, a global movement involving private space missions that are less expensive than in the past, when space exploration was conducted exclusively by national governments. Simple CubeSats cost just a few hundred thousand dollars, whereas a large conventional satellite requires an investment in hundreds of millions.

“There has been undeniable global growth in the use of CubeSats,” says physicist Luiz de Siqueira Martins Filho, from the Federal University of ABC (UFABC) in São Bernardo do Campo, São Paulo. According to Luiz de Siqueira Martins Filho, CubeSats are democratizing access to space because they are cheaper and easier to manufacture, partly due to their use of off-the-shelf components such as sensors and processors. “Feats that used to be exclusive to major space agencies like NASA and the ESA can now be achieved by universities, businesses, and schools. CubeSats have grown in economic and technological relevance worldwide in recent years.”