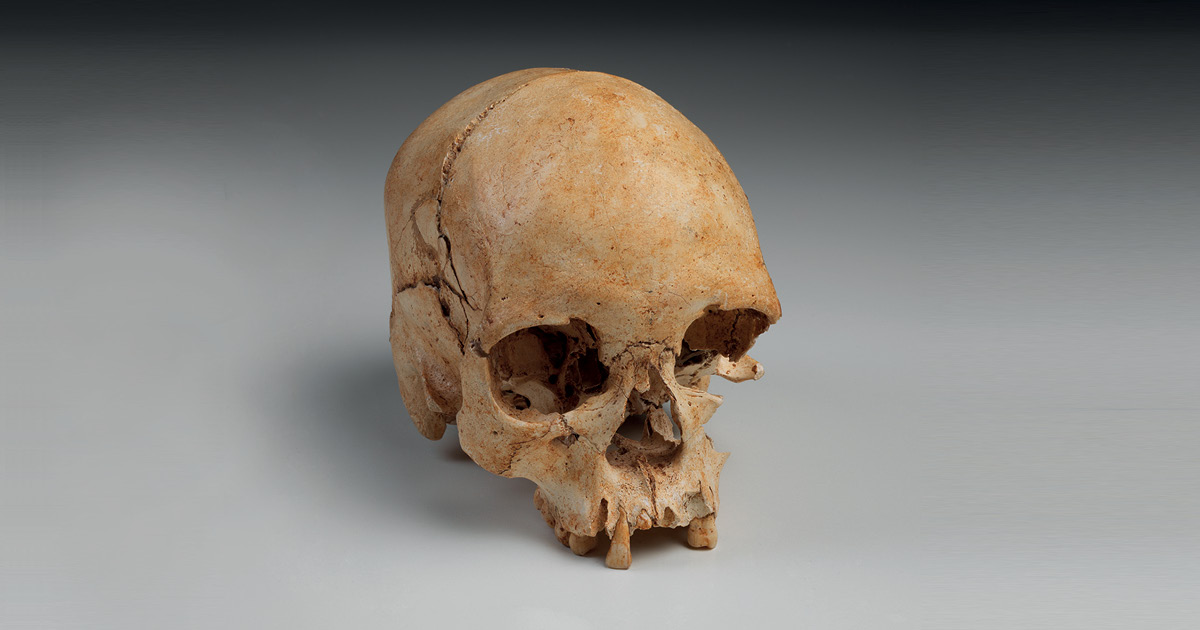 The skull of Luzia, estimated to be 11,000 years old, was one of the most well-known pieces in the National Museum

Archaeologists at Brazil’s National Museum are preparing to conduct the most painful fieldwork in their careers, searching for pieces of the institution’s collections that have been preserved, partially or totally, amidst the rubble of the 13,600-square-meter Palácio de São Cristóvão. The three-story museum building was gutted by fire, with internal walls and floors collapsing. “I have students who will be doing their first excavations here, in the ruins of the palace,” says archaeologist Antonio Brancaglion Junior, director of the National Museum’s Egyptology Lab. He was responsible for a small but interesting collection of 700 pieces from an ancient culture that flourished along the banks of the Nile, and over 700 pieces of Greco-Roman origin. Among the items that may possibly be salvaged from the building’s wreckage are approximately 100,000 pieces from the archaeological collection and at least 2,300 skulls and human bone fragments from the biological anthropology sector’s conservation area. About 80% of this material, which covered a time span from the Upper Paleolithic period (between 40,000 and 10,000 years ago) to the present day, was in the building that burned. The museum collection encompassed other collections pertaining to different prehistoric and historical cultures that existed in Brazil, the Americas, Europe, Asia, and Africa.

Roughly speaking, the collections were divided into the archaeology of Ancient Egypt, the Mediterranean (Greece and Rome), Andean (pre-Columbian cultures), and Brazilian. The array of Brazilian pieces included collections that date from 1867 to the present, with material from the nation’s south to the Amazon, including material from the sambaqui (coastal sites) of Santa Catarina and Rio de Janeiro. “Some lithic, ceramic, and metal material may in theory have been preserved,” observes Rita Scheel-Ybert, coordinator of the postgraduate program in archaeology, which currently has 12 professors, 29 master’s students, and 31 doctoral students. “The plants in the archaeobotanical collection and the artifacts made of wood and cloth have little chance of having survived the fire.” In the Botanical Garden, a building near the palace, a small collection resulting from recent excavations wasn’t affected. But this material represents less than 20% of the archaeological specimens that were at the museum.

The expected losses in the archaeology and biological anthropology collections will open gaps in the understanding of prehistory and national history, as well as impoverish the legacy of the National Museum itself. Perhaps the most emblematic example of the fire’s impact is the disappearance of the female human skull nicknamed Luzia, which had been estimated to be about 11,000 years old, the oldest remains from Homo sapiens found in Brazil, and one of the oldest in the Americas. Found in the mid-1970s at the site of Lapa Vermelha IV, in the region of Lagoa Santa, the skull was later studied by bioarchaeologist Walter Neves, from the Institute of Biosciences of the University of São Paulo (IB-USP). In the late 1980s it was used to propose an alternative theory regarding the human settling of the Americas: the dual-component biological model.

This controversial theory defends the idea that our continent was colonized by two migratory waves of modern humans from Asia. The first would have occurred about 14,000 years ago and been formed by individuals similar to Luzia, with traits similar to those of present-day Australians and Africans, but who did not leave descendants. The second wave would have landed in the Americas about 12,000 years ago and its members would have had the physical characteristics of Asians, also called Mongoloid, from which the continent’s present-day indigenous peoples are descended. The more traditional model supports the idea that only groups with Mongoloid traits colonized the Americas. In addition to Luzia, the National Museum housed about 200 bone fragments from individuals of Lagoa Santa, Minas Gerais, and was the largest collection associated with the people who inhabited that region thousands of years ago. As most of these bones were found scattered around various archaeological sites, the researchers aren’t certain how many individuals they represent.

There are significant collections on the ancient people of Lagoa Santa in at least three major research institutions, a guarantee that further studies may be done with other anatomical samples from Luzia’s contemporaries or descendants. The collection of Peter Lund, a Scandinavian naturalist who collected archaeological and paleontological samples in the Minas Gerais region during the nineteenth century, includes 15 human skulls, located at the Natural History Museum of Denmark. The Federal University of Minas Gerais (UFMG) has bone fragments from about 90 individuals. USP has preserved skulls or partial skeletons of another 50 inhabitants from Lagoa Santa’s prehistory at two of its locations: at the Museum of Archaeology and Ethnology (MAE-USP) and at IB-USP. “The USP material comes from burial sites where it’s possible to identify whether the bones belong to one or more individuals,” explains archaeologist Mercedes Okumura, from IB, who taught at the National Museum between 2014 and June of this year. “The individuals from Lagoa Santa in the USP collections are more complete than those from the National Museum, but they’re few in comparison to the collection in Rio.” Other samples from Lagoa Santa that disappeared in the tragic fire include about 1,000 samples of charcoal, as well as dental calculus and traces of plants, which archaeologist André Strauss of MAE-USP has collected since 2011 during excavations in the Minas Gerais region. “I had loaned this material to Professor Rita Scheel-Ybert, an expert in anthracology [the study of carbonized plant material found at archaeological sites],” says Strauss.

A female anthropomorphic statue from Santarém, in the AmazonRomulo Fialdini/Tempo Composto

Another probable significant loss to the National Museum’s biological anthropology collection were the skulls of 42 Botocudo (also known as Aimoré) natives. These were combative natives known for extending their lower lips and the lobes of their ears with the aid of circular pieces of wood, the botoques (hence the name given them by the colonizers). The Botocudo resisted the Europeans during the colonial period and were practically wiped out without a trace in the nineteenth century. Originating from the states of Santa Catarina, Minas Gerais, Bahia, and Espírito Santo, the bones stored at São Cristóvão Palace comprised Brazil’s only known collection of their people. Some researchers defend the thesis that the Botocudo may have been the last descendants of Luzia’s people from Lagoa Santa, a hypothesis that hasn’t yet been proven.

“It is possible that some skulls and bones in our collection weren’t affected by the fire, however, most of the material was stored on the museum’s third floor, which collapsed,” says archaeologist Claudia Rodrigues-Carvalho, coordinator of the National Museum’s biological anthropology sector. Bones that possibly escaped from the flames could still have been shattered by falling onto the ground floor and being struck by debris from the building. There is also the risk that there will no longer be registration numbers on the pieces recovered amidst the rubble, which could make it difficult to associate them with the correct collections. In Germany and other European countries, there are a few museums that also have Botocudo bones. “We have a skull and some skeletal fragments from a Botocudo,” says bioarchaeologist Sabine Eggers, an IB-USP-educated professor and currently curator of the Vienna Natural History Museum. “They were collected in Brazil, but we don’t know where.”

Researchers at the National Museum know that it’s unlikely that some of the more unique items from the collections lost in the fire can be fully recovered or replaced. Even if other institutions, whether in Brazil or abroad, were to make generous donations of their pieces, or even were future excavations to provide quality archaeological material, pieces like the mummy of Sha-amun-en-su, one of the treasures of the institution’s Egyptian collection, are lost. Sha-amun-en-su was a singer-priestess who lived in Thebes (present-day Luxor), in Ancient Egypt, about 2,800 years ago and chanted hymns dedicated to the god Amon at the Temple of Karnak. Her mummy arrived at Brazil’s imperial palace in the hands of Dom Pedro II, who received her as a gift during his trip to Egypt between 1876 and 1877. Her beautiful, colorful sarcophagus was never opened.

A few years ago, Antonio Brancaglion Junior, employing X-ray computed tomography scans, which show the internal structures preserved inside the coffin in three dimensions, found that the singer’s throat appeared to be lined with a resin bandage. This detail was interpreted as showing the care those responsible for the mummification process of Sha-amun-en-su took to protect a bodily region which, according to their religious beliefs, would also be vital for the singer during her sojourn in the beyond (see Pesquisa FAPESP issue no. 215). “The fire doesn’t mean the end of Egyptology at the National Museum,” explains Brancaglion Junior. “A good part of the 700 objects in the collection have already been studied and cataloged, and we also do research on materials from other collections, from here and abroad.” In Brazil, MAE-USP, the São Paulo Art Museum (MASP), the Ema Klabin Foundation, and the Bo Bardi Institute are some of the institutions that own pieces from Ancient Egypt. The archaeologist and his students also participate in excavations in Egypt.

Although he considers it unlikely that the most valuable items from the Egyptian and Mediterranean collections have survived the fire, Brancaglion Junior hasn’t lost all hope. Soon after the disaster, he saw photos and heard reports that parts of Greek vases and a fresco from Pompeii were found among the ruins of the closed palace. The Greco-Roman collection was initially created because Empress Teresa Cristina (1822–1889) was interested in archaeology. “The British Museum was bombed during World War II and survived,” he says. “We’ll survive, too.”

MAE-USP fights for more space
One of the goals of archaeologist Paulo DeBlasis, director of the Museum of Archaeology and Ethnology of the University of São Paulo (MAE-USP) since August 2018, is to acquire enough space to house large, permanent exhibits. One possibility would be the Museum Square, which would bring together several USP institutions near one of the entrances to the São Paulo campus. But for the time being, only the building’s concrete structure is complete and there is no prediction when work will continue. At the headquarters of the MAE, where an exhibit on Greek cities ended in March, there’s only room for temporary exhibits. In 2017, when the temporary exhibits remained open for longer periods, the museum received 15,649 visitors.

The permanent collection, which has a million pieces, includes archaeological and ethnological collections brought from the Paulista Museum in the 1980s. “We have good safety conditions, with a carbon dioxide system that floods the room in case of fire, and working hydrants, but we’re forming a fire brigade and reinforcing the alarm system,” DeBlasis says.

The institution receives about R$1 million annually for maintenance, security, and service agreements. “We have to seek resources from outside the university and funding agencies, mainly for research,” he observes. The 18 MAE researchers conduct archaeological studies in São Paulo and other parts of the country, such as the Amazon, Santa Catarina, and Minas Gerais. In addition to offering elective classes for undergraduate students from any USP program, the museum offers master’s and doctoral degrees in archaeology, with an enrollment of around 100 students.