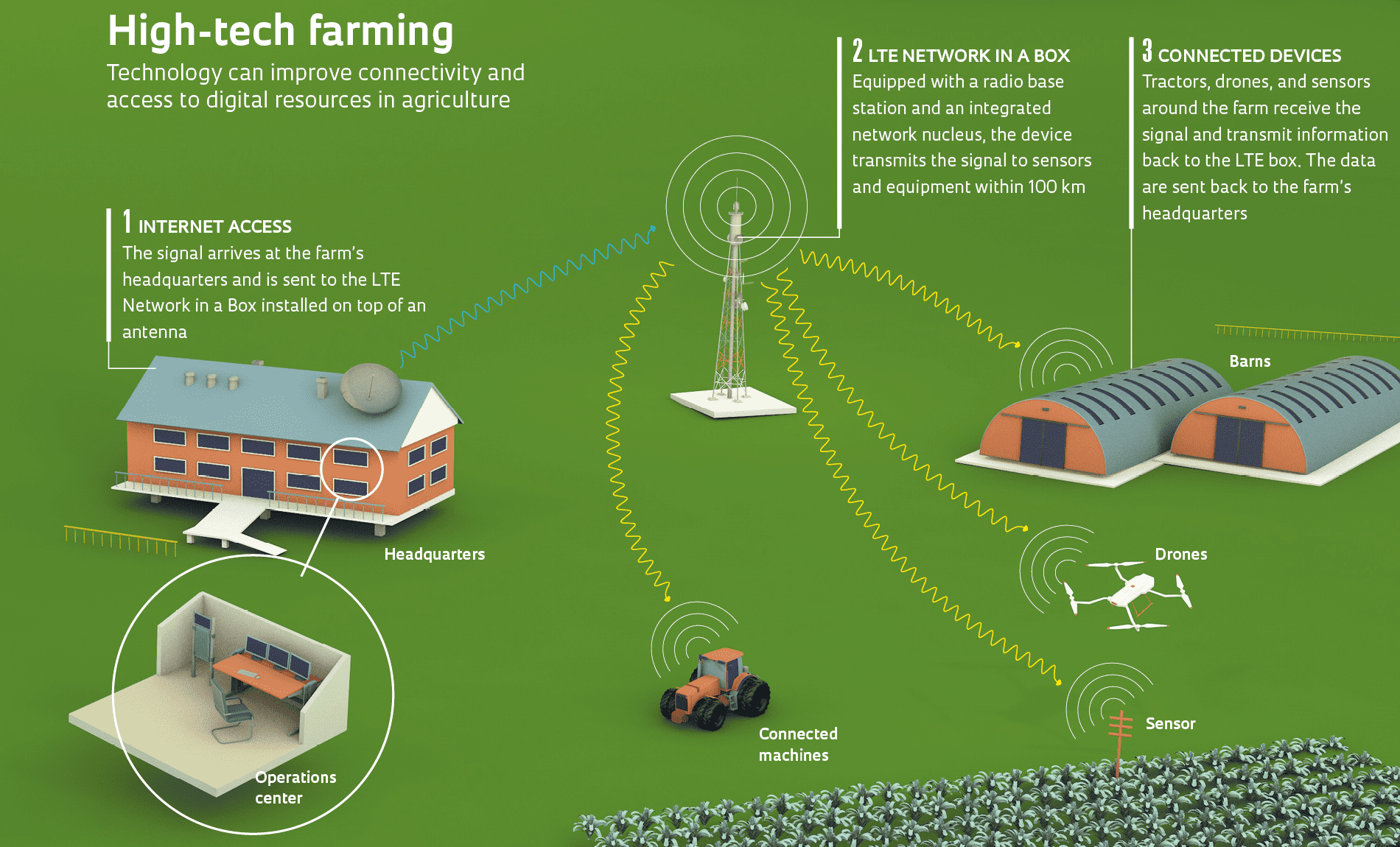 The Brazilian National Telecommunications Institute (INATEL), a teaching and research center in Santa Rita do Sapucaí, Minas Gerais State, completed the development of a radio communication device in April that is capable of supporting private wireless networks in remote areas using the Long-Term Evolution (LTE) communication standard, better known as 4G. These wireless networks can transmit data and voices, making it possible to connect machines and equipment to the Internet of Things (IoT) and digitally transform businesses in a range of sectors, including agricultural producers, sugar and alcohol plants, mining companies, and oil, energy, and gas companies. Even public security forces located in regions of Brazil that are not covered by telecommunications operators can benefit from this innovation.

The LTE Network in a Box is being developed by INATEL in three versions, to operate on frequencies of 250 megahertz (MHz), 700 MHz, and 1,800 MHz. The lower the frequency, the greater the signal range—under ideal conditions, a 250 MHz transmission can reach up to 100 kilometers (km), while at 1,800 MHz, it can reach up to 5 km. According to Henry Rodrigues, head of technology and innovation at the INATEL Radiocommunication Reference Center (CCR), the 250 MHz version is at the most advanced stage. It is in the final testing phase and a deal has already been signed with a manufacturer and distributer, the identity of which remains confidential.

Rodrigues believes that the 250 MHz version is likely to attract the most interest from the market due to the fact that Brazilian telecommunications regulations allow this frequency to be provided with a Private Limited Service (SLP) license issued by the Brazilian National Telecommunications Agency (ANATEL). The other frequency bands require a public tender process. Tenders for the entire 4G frequency spectrum were opened in 2012 and contracted by telephone operators, which use equipment from multinationals such as Nokia, Ericsson, and Huawei.

A private LTE network can operate in a closed circuit, like an intranet, or it can have an entry point for an internet signal obtained via satellite, cable, or point-to-point radio links. The technology developed by INATEL combines the two features needed for an LTE network into one single box. The first is the radio base station, which supports the fixed access network by capturing a signal and relaying it to connected devices. The second is the core of the integrated network, the instrument hub that controls the radio base stations. “With most equipment currently available on the international market, the two features operate separately,” explains Rodrigues. “In our solution, the core network functions are performed by software embedded in the base station.”

Trailblazing CPQD
Hardware for LTE networks in rural areas is an emerging sector for the international market and the equipment needs to be developed according to the frequency available in each country. In most of Latin America, remote areas are served by the 450 MHz band. This was the frequency initially chosen by ANATEL, with the telecommunications operators that won the 4G tender to be responsible for finding an appropriate solution, but the idea never took off—partly due to a lack of interest from the companies, which ended up overturning the requirement in court. The alternative was to use the 250 MHz band, regulated by ANATEL for private networks using SLP licenses.

The first technology for rural LTE networks in Brazil was designed for the 450 MHz band in 2012 by researchers from the Telecommunications Research and Development Center (CPQD), based in Campinas, São Paulo State, and later transferred to its commercial partner, Trópico Telecomunicações (see Pesquisa FAPESP issue no. 253).

According to Armando Barbieri, head of product marketing at Trópico, a 700 MHz version with a range of 10–15 km was also developed, to supply the Brazilian Army. It was used in an exclusive public security and defense network to monitor events in Brasília related to the 2016 Olympic Games. A third version, running at 250 MHz, allowed sugar and alcohol producer Usina São Martinho to connect 2,000 agricultural vehicles at its plants in the interior of São Paulo (see Pesquisa FAPESP issue no. 287). “We already have contracts with four more agribusiness customers and another in the railway logistics sector,” says Barbieri.

Paulo Bernardocki, products and technology director at Swedish company Ericsson, notes that after focusing heavily on the massive smartphone market, telecommunications operators have been increasing their commercial efforts on private LTE networks, offering frequencies obtained through tender processes. One example is the deal signed by telephone operator Vivo to implement LTE networks for Brazilian mining company Vale, starting at its Carajás mine in the state of Pará, allowing its trucks and drills to be operated remotely (see Pesquisa FAPESP issue no. 289)—the existing network in Carajás was implemented by Finnish company Nokia. “The advantage of telecom companies is that they have expertise in building and operating networks and a large team that can quickly solve any maintenance issues that may arise,” says the executive.

According to Bernardocki, the interest in private LTE networks is understandable in such a large country where many areas do not have adequate telecommunications coverage. Migration to 5G, however, is inevitable. “The transmission speed is 100 times higher and the latency—the time taken to respond to a request—is just 5 milliseconds, ten times faster than 4G,” he says. These characteristics will open opportunities for new technological architectures. “Drones mounted with cameras will be able to fly over a field of crops, process the image in the cloud, identify pests using artificial intelligence, and apply the spray, all in a single flight, before returning to base,” predicts Bernardocki.