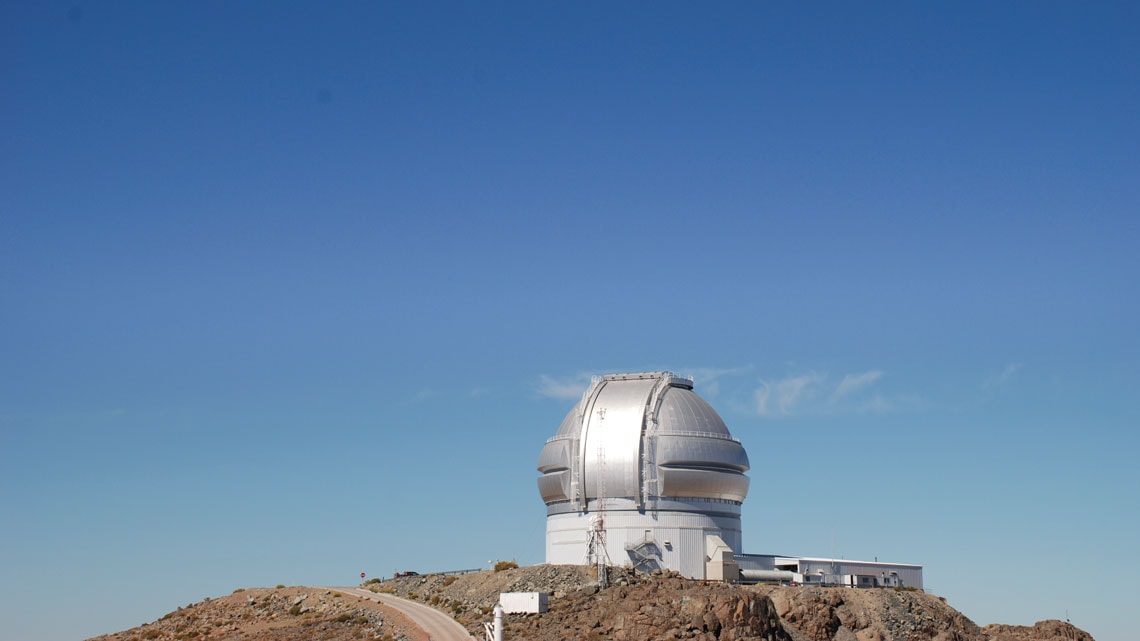 Gemini Observatory, near the city of Vicuña, Chile

Since it went into publication 20 years ago, Pesquisa FAPESP has presented innumerable places that deserve to be discovered. In addition to offering beautiful landscapes, they can teach us a lot about plants, animals, our own human nature, and the planet.

Those who walk in the Amazon and the Atlantic Rainforest will be able to see these forests as havens for bird species, some only recently identified by specialists (see Pesquisa FAPESP issues no. 207 and no. 217), and as spaces in a state of continual transformation (issue no. 267). Isolated areas such as the jungle-covered mountains of Minas Gerais and São Paulo are favorable for the formation of new species of orchids, for example (issues no. 212 and no. 218).

Tourists interested in science who read the magazine will also see the semiarid scrublands known as the Caatinga—which to most people is a deceptively sterile environment—as scenes of intricate ecological processes, rich in unique species of trees, fish, lizards, and birds (issues no. 93 and no. 108). One particularly rich and phenomenally arid region is the São Francisco dunes area, in northern Bahia. The scorching sands and sparse vegetation are home to “crazy fauna,” as defined by biologist Miguel Trefaut Urbano Rodrigues, from the University of São Paulo (USP). Rodrigues visited the region for the first time in 1980, and 30 years later he still traveled the dunes, always finding fascinating animals on either side of the river—including species of lizards that look like snakes, because of their short limbs. In the dunes live animals with only slight differences in appearance or genetic makeup, so-called sister species, who share a common ancestor but took separate evolutionary paths from the moment the river separated them. 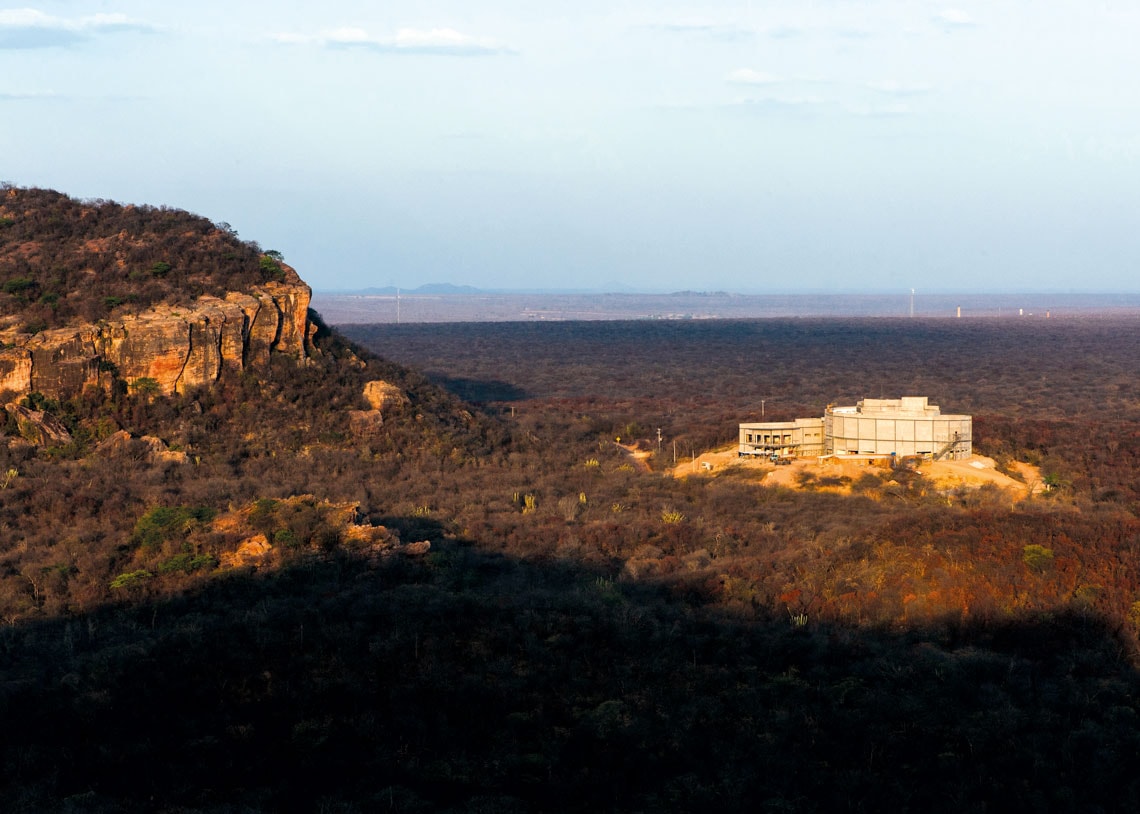 The Museum of Nature, in Serra da Capivara: places that are well worth a visitLéo Ramos Chaves

With time and luck, visitors will find animals that live only there, such as the lizard Eurolophosaurus amathites; or a 20-centimeter-long rodent, Yonenaga’s Atlantic spiny-rat (Trinomys yonenagae); and the 20-centimeter-high plain-tailed nighthawk (Nyctiprogne vielliardi); all species adapted to Bahia’s scorching sands. In this Brazilian Sahara, biologists have already identified almost 30 species and eight new genera of unique (endemic) lizards, more species than in North American or African deserts. The dunes exhibit biological diversity comparable to that of the Galápagos archipelago, whose fauna Darwin studied to develop his theory of the evolution of living organisms (issues no. 57, no. 194, and the special FAPESP 50-year edition).

In the Caatinga, the past is exposed in many ways. Several articles have described the exceptionally well-preserved fossils of reptiles, fish, and plants dating back hundreds of millions of years in Chapada do Araripe, which spans the states of Ceará, Pernambuco, and Piauí (issues no. 78, no. 115, and no. 283). In turn, the history of human occupation can be understood through the more than 1,200 prehistoric cave painting sites, dated between 4,000 and 50,000 years old, in Serra da Capivara National Park (a UNESCO World Heritage Site), and at the American Man Museum, opened in January 2019, in the south of Piauí, near the Museum of Nature (issues no. 272 and no. 275). Another area worth visiting is Lagoa Santa, in the Cerrado of Minas Gerais, which housed ancient human populations with unique cultures. Between 2001 and 2009, Brazilian researchers exhumed and analyzed 26 human burials, conducted 10,500 and 8,000 years ago, which revealed hitherto unknown mortuary practices (issue no. 247).

The story of Earth can be revived through 142 geological sites proposed in 2017, in 81 municipalities throughout the state of São Paulo, to encourage their preservation. In 2012, with the same objective, the Brazilian Commission on Geological and Paleobiological Sites presented a national survey with 116 geologically important sites, 16 of which are in São Paulo (issue no. 257). In Rio Grande do Sul, the ruins of the Seven Peoples of the Missions, in addition to their cultural value, maintain clues to understanding how Earth’s natural magnetic field varies over the centuries (issues no. 97, no. 244, and no. 185). 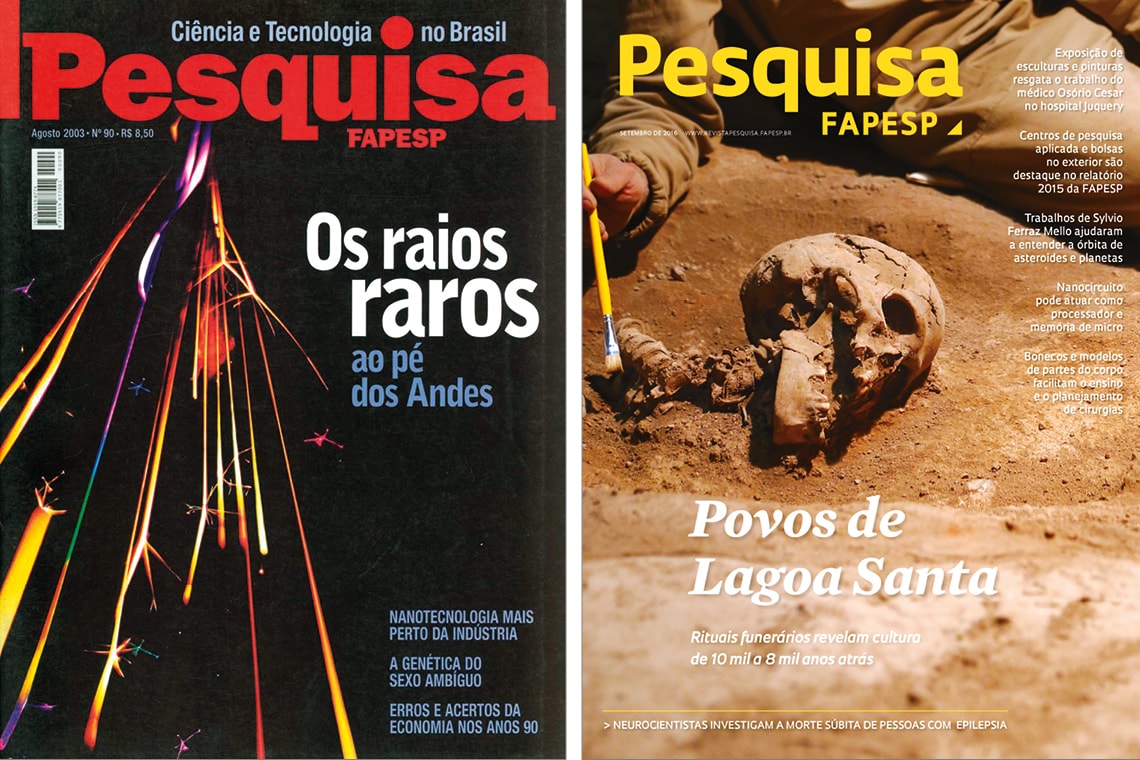 Articles in issues 90 and 247 reported on research at the Pierre Auger Observatory, in Argentina, and in Lagoa Santa, in Minas Gerais

Terrestrial telescopes invite travelers on an even greater journey, through different types of landscapes: the geographical, because they are located in isolated areas; the cosmic, by presenting physical events that occurred among the stars and galaxies; and into the depths of matter, since at times they illustrate phenomena between elementary particles. In this arena, Brazil is part of three international consortia: the Pierre Auger Cosmic Ray Observatory, built on the semidesert plains of western Argentina (issues no. 90, no. 142, and no. 260); the Southern Observatory for Astrophysical Research (SOAR); and the Gemini Observatory. The latter two are built on a mountain in the Chilean Andes, Cerro Pachón, at 2,700 meters above sea level (issues no. 98 and no. 100).

There are also locations in other countries which welcome Brazilian researchers that are well worth visiting. The Laser Interferometer Gravitational-Wave Observatory (LIGO), at the California Institute of Technology, in the United States, which made the first image of a black hole and its surroundings, was presented in Pesquisa FAPESP in April 2019 (issue no. 279). The Large Hadron Collider (LHC), the largest particle accelerator in the world, built on the border of Switzerland and France, was detailed in issues nos. 147 and 270.