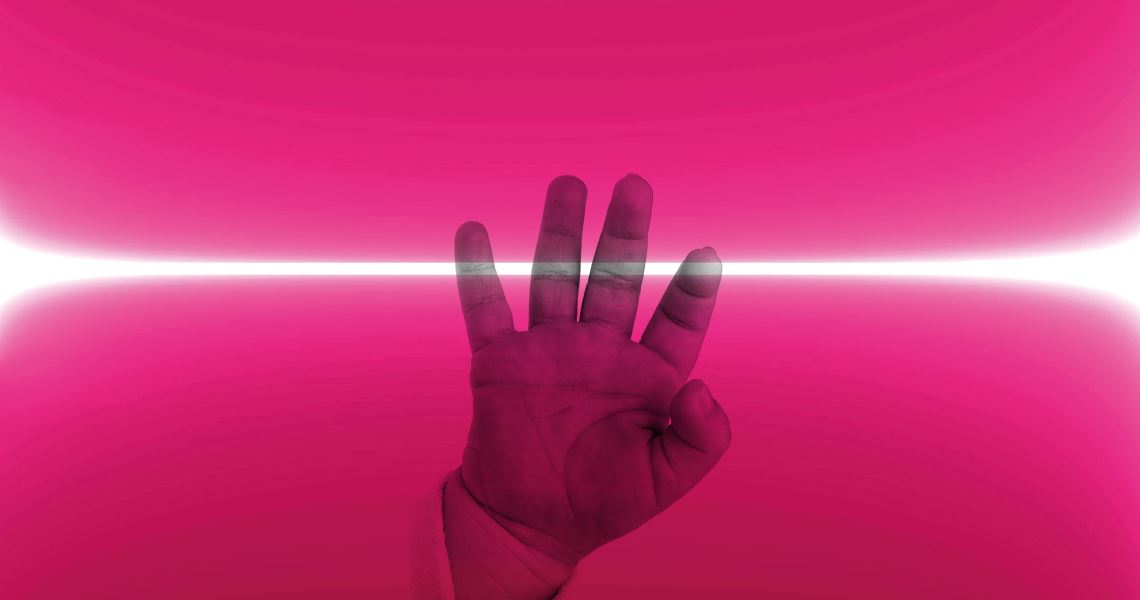 Imagine a world where more than a million newborn babies disappear without a trace from homes and hospitals every year. Governments, security forces, and border control agencies are unable to deal with the huge number of disappearances worldwide. This is the reality we currently live in. In Brazil alone, some 500 babies are switched at birth in maternity hospitals every year. Another 50,000 children, according to the Brazilian Medical Council (CFM), go missing annually—a figure that does not include unreported cases. Almost six children disappear per hour in the country.

One way to reduce this number is to identify babies as soon as they are born, by taking prints of their fingers, palms, and soles. The strategy has been recommended for 30 years by the Child and Adolescent Statute (see Pesquisa FAPESP issue no. 296). In 2018, an ordinance issued by the Brazilian Ministry of Health made it mandatory to take palm prints of newborns in Brazil, together with biometric identification of the mother.

But technology does not always follow legislation. There are still few maternity wards that take finger, palm, or sole prints, and of those that do, most still use ink and paper. This method is inaccurate and often does not help to identify a child or prevent switches and disappearances.

Natosafe, a startup founded in the state of Paraná in 2014, is attempting to change things. The company has developed a system to identify children aged 0 to 5, based 100% on Brazilian technology. The solution uses a scanner called NilmaOne to collect high-resolution biometric data from babies. This scanner is connected to a data management platform called Infant.Id, which allows public agencies to issue documents, identify and recognize individuals, and monitor links to parents, essential to preventing disappearances.

Another company that provides biometric solutions for newborns is Griaule, based in Campinas, São Paulo State. Its GBS Baby technology is also capable of collecting fingerprints, palm prints, and footprints from newborn babies. “To ease the financial burden faced by maternity wards and hospitals in Brazil implementing these systems, the company has adopted conventional fingerprint readers, which are widely available, and focused on palm print reading,” explains Thiago Ribeiro, director of Griaule.

According to him, development of the system began in 2016 when the company partnered with the Center for Women’s Health (CAISM) at the University of Campinas (UNICAMP) to study the biometric identification of babies. A palm print is generally considered sufficient to prevent baby switches and kidnappings at hospitals. For other purposes, such as border control and vaccinations, the options are limited by the fact that many Brazilian states accept fingerprints only. Neonatal biometrics can also be used to identify children in refugee camps.

Natosafe’s solution has been adopted in the states of Pernambuco, Mato Grosso, Rio de Janeiro, and Goiás—the latter was the first to begin issuing high-resolution biometric records in August this year. The system was created by a team of 15 professionals, including hardware and software engineers, data and computer scientists, and UX (user experience) designers, supported by fingerprint experts and health professionals.

“We want to be a global benchmark in the biometric identification of children,” says Eduardo Liebel, sales manager at Natosafe. “We are already in talks to distribute our solutions to countries across South America, Europe, and the Middle East,” he adds, noting that the scanner created by the company is certified by the FBI, a prestigious seal of quality for the device.

The story behind Natosafe’s technology began many years ago, far from Curitiba. It all started in Pernambuco in 1985, when Nilma da Silveira Azevedo took the entrance exam for the Recife Police Department and began her career as a fingerprint expert at the Tavares Buril Identification Institute (IITB).

“One day, my director asked me to compare prints taken from a child with a set from a Live Birth Certificate, a document issued for every newborn baby so that they can be registered with the authorities. It was an impossible task because of the poor quality of the prints provided by the mother,” recalls Azevedo. “I saw this situation again and again, so I learned how to take identity prints from newborns and then started visiting maternity hospitals to teach the techniques to health professionals, as well as alerting them to the importance of doing it properly.”

The next step was to establish an identification form for recording the fingerprints of the mother and footprints of the baby, still using ink and paper. As the difficulties taking good quality prints continued—it is not uncommon for them to look like unidentifiable ink blots—Azevedo started looking for companies interested in combining technology with her experience in neonatal biometrics.

Natosafe, which at the time was called Akiyama and was focused on the development of biometric solutions in general, agreed to a partnership. In 2014, the company started work on the NilmaOne scanner, named after Azevedo, which was completed last year. The machine is portable and multifunctional: the same sensor can be used to scan the mother’s fingerprints and the baby’s fingerprints, palm prints, and footprints.

The data are collected in the newborn’s first few hours of life. A computer controls the scanner and captures images automatically—the operator simply positions the fingers, hands, or feet to be scanned and the device does the rest. The ergonomic shape of the scanner facilitates the image capture process and even allows the device to be used inside neonatal incubators to collect biometric data from premature babies. 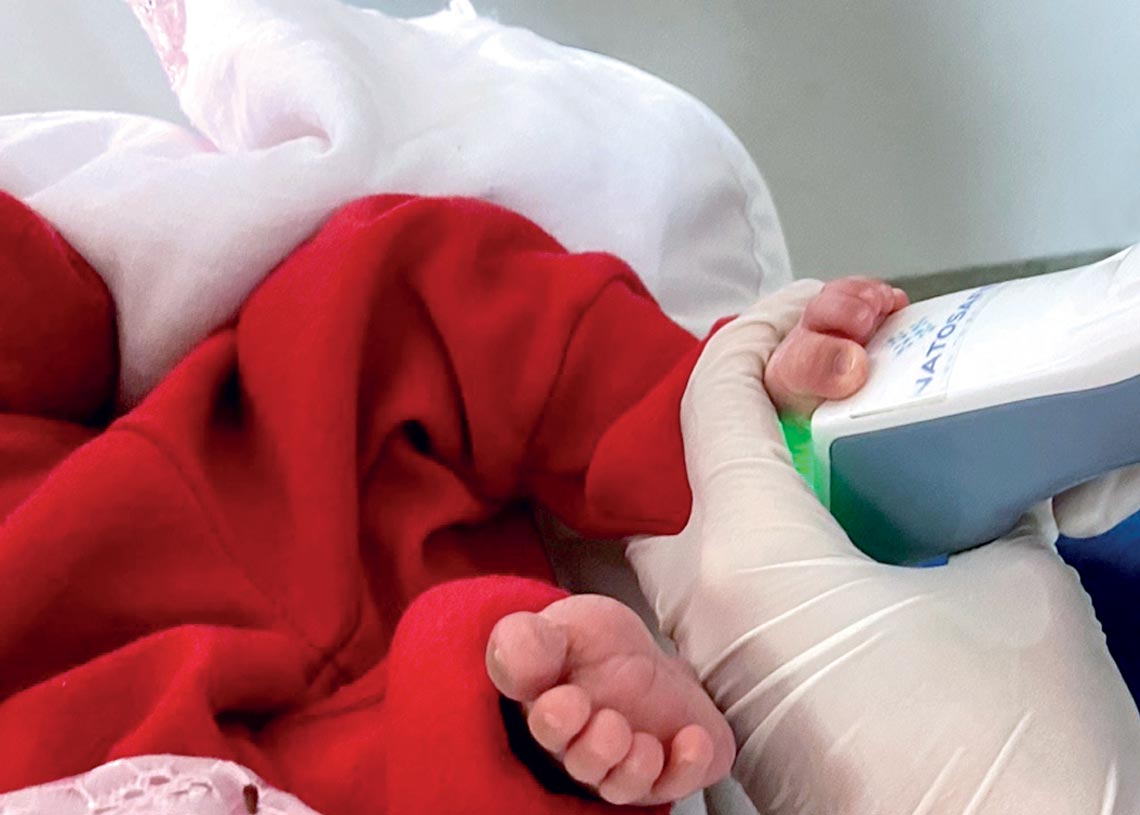 A technician scans a baby’s footprint with the Natosafe scannerNatosafe

One particular challenge is that baby skin is very thin—in newborns, it is just 0.21 millimeters thick, less than half that of adult skin. This means that even high-quality scanners used to take adult fingerprints cannot capture images with the resolution needed to identify newborn babies.

“The solution we found was to use artificial intelligence [AI], which not only improves image processing to generate a much more detailed print, but also triggers the capture automatically at the ideal time to take the best picture,” explains Liebel. He explains that the software is “trained” with images of neonatal fingerprints using deep learning. The algorithm that processes the images “learns” from each new image added to the database, refining itself over time.  Thus, as the database grows, the software establishes minimum quality standards for capturing images and determining whether they are good enough to identify the newborn.

The data are encrypted and sent to the identification institutes of each state, which store them in compliance with the Brazilian Personal Data Protection Law (LGPD). They can then be accessed via the Infant.Id platform, a database that each state can use to manage biometric images collected at its maternity wards and hospitals. Natosafe guarantees that it cannot access this information, which is available exclusively to the authorities for investigations, identification, preparation of documents, and border control.

The company estimates that each set of fingerprints collected costs the state R$10—there is no available estimate for the cost under the currently used system. It is a long-term investment, since neonatal biometric data last a long time. “The details captured in infant fingerprints can be compared to those taken when they are adults,” says Liebel.

One way of assessing the potential of the Brazilian technology is to compare it with ION, a biometric scanning prototype created at the University of California, San Diego (UCSD), in the USA. In an article published at the end of 2019, UCSD researchers highlighted some of the challenges that Natosafe has overcome. The first is the issue of babies not necessarily cooperating when it comes to putting their fingers in the right place and staying still until the image has been taken.

Unlike the Californian prototype, which has a smaller space for the child’s finger, with openings of various sizes that can be swapped to find the best fit, NilmaOne has a wide, smooth scanning surface. The shape prevents deformations in the image, is more comfortable for the infant’s fingers, and provides a large enough area to take fingerprints from the mother and palm and sole prints from the baby. The operator does not need to press any buttons, since the software identifies the best time to capture the images.

The article also emphasizes the importance of using AI to ensure the subtle details of infant fingerprints are recorded and the need to collect plenty of samples to build a database for the software to learn from. Natosafe collected most of its training data in Recife, in partnership with the IITB: more than 6,000 children have already had their biometric data recorded. As NilmaOne expands into more Brazilian states, the software’s sensitivity will be continually refined, improving image quality and consequently increasing security.