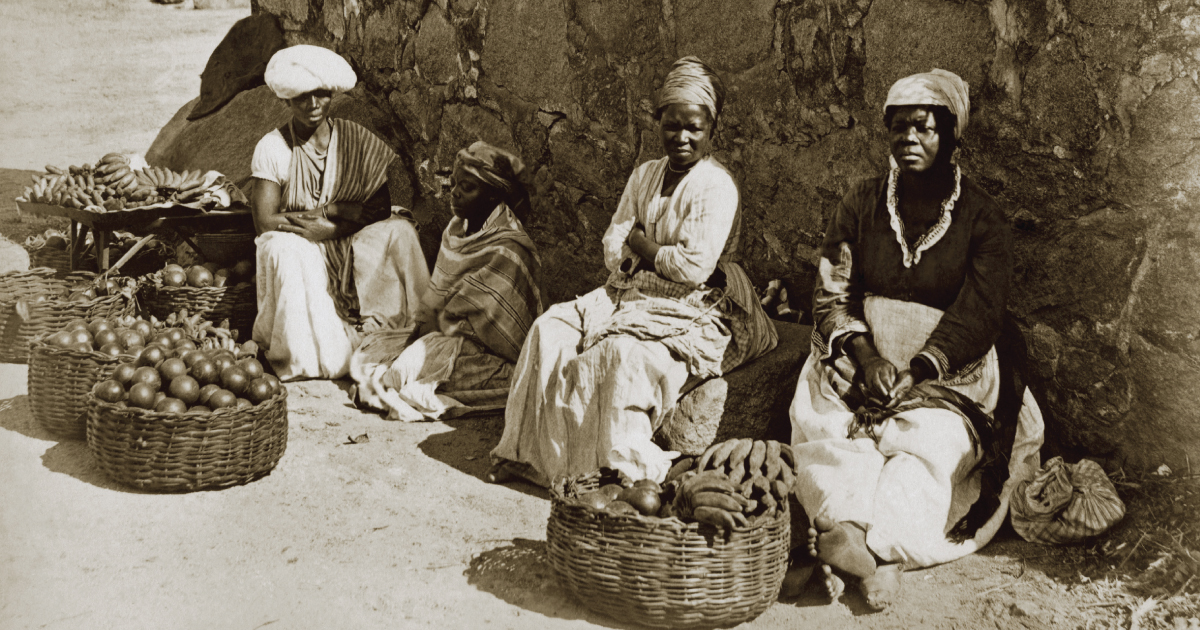 Quituteiras in Rio de Janeiro, in 1875: women had more employment options than men

Refusing to work, talking back to their masters and causing minor damage became strategies employed by enslaved black women to reduce their personal value and thus lower the price they would have to pay for freedom. Some even resorted to seeking protection from families who were enemies of the masters whom they served in order to obtain their freedom. Abolition did not occur until 1888, but after the enactment of the Law of Free Birth in 1871, which declared all children born of slaves to be free after the law was passed, slaves acquired the right to purchase their freedom. Saving money for that purpose required sacrifices beyond slavery, such as working on rare days off or negotiating the portion of their pay that would be passed on to their owners. Women were more successful than men in these strategies, primarily due to the demand for domestic services. Once freed, however, they had to overcome other obstacles no less difficult than the previous ones: finding sufficient work to support themselves, assuming sole responsibility for their children, and gaining a place in local society.

In research that she began during her master’s studies and continued during postdoctoral studies at New York University, historian Lúcia Helena Oliveira Silva, a professor at the São Paulo School of Sciences and Letters on the Assis campus of São Paulo State University (FCL-UNESP), examined how African and Afro-Brazilian female slaves used the courts to win emancipation. “Starting with a study of 157 lawsuits that were heard at the court in Campinas, I found that women were involved in more than half of the proceedings for the purchase of freedom,” says the researcher, who is the assistant coordinator of the Negro Center for Research and Extension (NUPE-UNESP).

Slaves who wanted to purchase their freedom would petition for an audience with the local judge in order to establish the price to be paid. They had to be represented by a free man because, under the law, they were not considered persons but someone’s property. According to Silva, in order to earn the sum stipulated for their release, slaves worked as laundresses and nannies, wet nurses, and embroiderers, as well as in starching and ironing clothes. They also sold homemade foods on the streets or grew vegetables in small gardens. The domestic market offered more opportunities for freed women than for the slaves.

To win their freedom more quickly, slave women took steps to reduce their value, such as making repeated attempts to escape, the researcher found. The case of a slave, Cristina, serves as an example. Taken against her will from Rio de Janeiro to Campinas, she refused to remain in that city. Although frequently beaten, she would not obey the master’s orders. He decided he had made a bad deal and got rid of her, sending her back to Rio de Janeiro. “Cristina was on the brink of death, but in the end, she got what she wanted,” says Silva.

Another ruse was to take advantage of the close friendships between masters. Silva tells the story of a captive in the interior region of São Paulo who, after being beaten, fled to the house of an enemy family. The patriarch of the family who accepted her was a judge. Later, she won her freedom with his help. “Stories like these enable us to break down the stereotype of the well-behaved female slave who earned her emancipation letter from the master as a reward,” the historian argues. “Or even the image of the rebellious slave who was always trying to escape and was therefore condemned to be forever enslaved.”

Once freedom was achieved, a slave’s problems were far from over. Needing the intervention of third parties to make freedom feasible meant that relationships of dependency were often created. These might entail providing services, agreeing to sexual relationships, or making cash payments.

In Recife, many women preferred to remain in the region so that their free status would not be questioned

From 1888-1926, one of the survival strategies adopted by freed women in São Paulo was to move to Rio de Janeiro. Based on her analyses of census documents available in the records of proceedings of the São Paulo state legislature, Silva observed that, between 1888 and 1890, the state of São Paulo was home to the third largest contingent of slaves in Brazil. However, by 1892, blacks had become scarce in the region. “The experiences of freed people and Afrodescendents in São Paulo were permeated by expectations of winning a place in society, countered by attempts by the masters to maintain the socio-racial situation that prevailed before Abolition,” she says. With the arrival of European immigrants, entering the labor market became even more challenging because employers preferred to hire whites.

On the other hand, Rio de Janeiro served as a place for slaves and freedmen from all over Brazil to fraternize. “The docks at the port and the availability of urban odd jobs to be performed by the black community facilitated their absorption into local society,” she says. One hypothesis advanced by Silva for this migratory movement is that freed slaves wanted to escape the stigma of slavery, a mark usually more apparent in the context of smaller cities; São Paulo, in 1900, was a city of approximately 240,000 inhabitants, whereas the population of Rio de Janeiro had reached 811,000.

Historian Isabel Cristina Ferreira dos Reis, a professor at the Center for Arts, Humanities, and Letters of the Federal University of the Recôncavo of Bahia (UFRB), reports that, contrary to the movements of former slaves from São Paulo, those from the sugar mills in the Recôncavo region of the state of Bahia, the area with the highest concentration of slave labor, remained close to the places where they had lived. This was because of their desire to maintain family and community ties.

Female workers with their children and other workers leave to harvest coffee in southern Rio de Janeiro State, in 1885: motherhood in a dramatic fashionLago, Pedro Correa do. Princess Isabel Collection. Photography from the 19th century. Capivara, 2008

Additionally, in Recife, many freed female slaves preferred to remain in the region so that their status would not be questioned since not all emancipation letters had official value, and freed women could be pursued by the police, who might mistake them for fugitive slaves. “The women freed themselves of the stigmas of captivity by inventing strategies to guarantee their place in society through work, networks of compadres, or affiliation with the Catholic sisterhoods,” reports historian Valéria Costa, a member of the faculty of the Federal Institute of the Pernambuco Sertão. She describes how the streets were full of women, particularly because of the retail trade. As part of a public safety policy, which viewed the black population as a potential cause of disturbances, municipal patrols prohibited the circulation of slaves and freedmen after 8:00 p.m. in the center of Recife, especially in the heavily commercial Santo Antônio district.

In Rio de Janeiro, the freed female slaves arriving from São Paulo maintained the same occupations that they had before emancipation. “The quituteiras, for example, moved quite freely in the urban spaces and preserved the tradition of preparing sweets and savory tidbits, as well as popular foods such as angu, a kind of polenta with pieces of meat, just as in the days when they were slaves,” Silva explains. The researcher verified this migration process during her analysis of close to 300 copies of seven São Paulo periodicals read by the black community, covering the years from 1886 to 1926. Those newspapers described the frustration that slaves and freedmen experienced in looking for work and for recognition as citizens.

Silva also consulted criminal and civil court case records from the National Archives, as well as 310 inmate record cards from the Casa de Detenção in Rio de Janeiro, dating from 1888 to 1920. Of all the cases she studied, the researcher found 275 that involved problems of drunkenness and disorderly conduct. Black women spent more time in jail when they had been arrested at night, at a time when it was thought that only immoral women would be out.

The status of females helped emancipated women find work but also exposed them to violence. Unlike what occurred with most white women, blacks—whether slaves, free born, or emancipated—had to face the problems associated with the streets, working for their masters or for their personal survival. “In Bahia, as in Rio de Janeiro, they encountered all sorts of harassment and aggression but defended themselves as best they could: they shouted and fought, and ended up getting a bad reputation,” noted Ferreira dos Reis, from the UFRB.

Motherhood
Although research has depicted female slaves as much less passive as was generally thought, Maria Helena Pereira Toledo Machado, a full professor in the History Department of the School of Philosophy, Literature and Human Sciences of the University of São Paulo (USP), reaffirms the precariousness of the emancipation process when it was based on domestic work. The employers exercised control over the autonomy of the freed female slaves, who were separated from their families and were given extremely few days off.

Toledo Machado described how those women experienced motherhood in dramatic fashion, whether as female slaves trying to build up savings to pay for freedom prior to 1888 or as freedwomen. In her research, she observed how frequently freedwomen lost custody of their children on the grounds that they were morally unfit to raise them. Because of that kind of situation, the historian argues that abolition should be thought of as a process marked by gender issues. “That suffering, however, does not invalidate the battle those women fought to reinvent their lives and reminds us how tough that battle was,” she concludes.