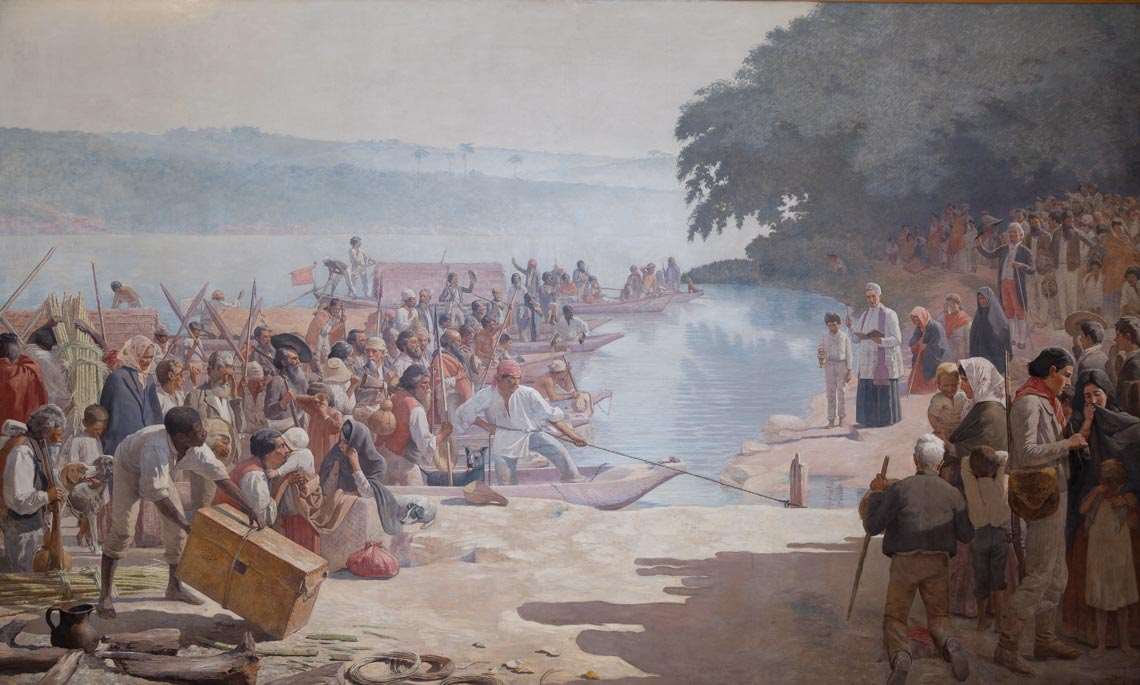 As of September, anyone entering the Noble Room of the University of São Paulo’s Paulista Museum (MP-USP) will find two recently restored paintings alongside the monumental work of art Independência ou morte! (Independence or death!), by the artist Pedro Américo de Figueiredo e Melo (1843–1905), from Paraíba. The two paintings were created by Italian artist Domenico Failutti (1872–1923). To the right will be a portrait of Empress Leopoldina (1727–1826) surrounded by her children and to the left a portrait of Maria Quitéria de Jesus Medeiros (1792–1853), who fought in the Brazilian War of Independence.

However, it wasn’t always this way. Since the museum opened its doors in 1895, until 1905, these spaces were occupied by, on one side, Caipira picando fumo (Caipira cutting tobacco), and on the other side, Amolação interrompida (Interrupted whetting), both by painter José Ferraz de Almeida Júnior (1850–99), from Itu, Brazil. They were later transferred to the Pinacoteca de São Paulo Museum. Engineer and historian Afonso d’Escragnolle Taunay (1876–1958), of Santa Catarina, Brazil, became the museum’s director in 1917. He was responsible for deciding to fill the then empty spaces with the women’s portraits while preparing the Paulista Museum for the Independence Centennial celebrations, to begin five years later.

Son of a viscount and grandson of a baron, Taunay previously worked as a professor at the Escola Politécnica, one of the nuclei that would later form the University of São Paulo (USP). He closely monitored Oscar Pereira da Silva’s progress and did not hesitate to request changes that he deemed necessary. The director’s approach provoked discussions among artists, as described by historians Pedro Nery and Carlos Lima Júnior in an article published in 2019 in the magazine Anais do Museu Paulista (Annals of the Paulista Museum). In the article, they discuss Taunay’s changes, which included removing another one of Almeida Júnior’s paintings from the Noble Room’s anteroom and moving it to an inner room. The painting in question was Partida da monção (Departure of the river expedition), which depicts the beginning of a pioneering expedition.

“Through these images, Taunay built, as one would expect 100 years ago, an elitist, racist, sexist, and nonviolent history,” notes the museum’s historian, Paulo César Garcez Marins. With support from FAPESP, his research is part of the subproject “Representações artísticas do passado nas coleções do Museu Paulista da USP” (Artistic representations of the past in collections featured at the USP’s Paulista Museum), which is part of a thematic project coordinated by art historian Ana Gonçalves Magalhães, director of the USP’s Museum of Contemporary Art (MAC).

Although the Empress was a woman of political power who played a part in organizing the fight for Independence, he notes that she was portrayed as a mother, surrounded by children. A farmer’s daughter from Bahia, Maria Quitéria dons a military uniform and holds a soldier’s musket. She is not depicted as a member of the grassroots forces fighting against the Portuguese army for Independence in Bahia, Brazil.

“Taunay minimized the role of women and excluded grassroots movements and armed conflicts from the battles for Independence,” he concludes. “As the Museum’s Hall, staircase, and Noble Room are all heritage-listed—meaning we cannot change them—we consider the works of art decorating these spaces analogous to documents. They are to be discussed with visitors and presented as a form of observing history, not as history itself” (see Pesquisa FAPESP issue nº 317).

In the PM, he reasons, there are no large canvases depicting historic battles, as there are in the National Museum of Fine Arts in Rio de Janeiro or the National History Museum in Buenos Aires. The only canvas commissioned by Taunay that features a war scene is Combate de milicianos de Mogi das Cruzes com botocudos (Battle between Militiamen from Mogi das Cruzes and the Botocudos). It measures 100 centimeters (cm) by 150 cm and shows the pioneers using muskets to shoot at indigenous people, who retaliate with arrows. In this painting, Oscar Pereira da Silva painted the sertanistas (people of the badlands) wearing their emblematic doublet, a vest with crosshatch seams forming a diamond pattern. Although doublets were common in the 18th century, they were less so in the 17th century, and they would become one of the symbols for these pioneers, along with their hats and boots, describes Marins in an article published in 2020 in the magazine Tempos.

In 1929, Taunay requested the painting Partida da monção, by Almeida Júnior, which was taken to the Pinacoteca Museum, and used it to “create a room dedicated to river expeditions,” notes PM historian Michelli Monteiro in an article published in 2019 in Anais do Museu Paulista. Almeida Júnior’s canvas was joined by Descobrimento do Brasil (Discovery of Brazil) and Fundação de São Paulo (Foundation of São Paulo), both by Oscar Pereira da Silva. The three tremendous canvasses reinforced the idea that Brazil’s history was marked by peaceful dialogue and territorial expansion, and not by conflict.

“By glorifying the pioneers as relevant characters who defined Brazilian territory and borders, Taunay defined São Paulo’s role in forming Brazil,” continues Marins. “With the paintings, São Paulo’s past is seemingly grandiose.” At the time of Independence, São Paulo was a small, insignificant city. But by 1917, it had grown to be the country’s second most important city, a thriving economic hub driven by the state’s coffee farming industry. According to the historian, “Taunay earnestly attempted” to disseminate the idea that “São Paulo’s history is Brazil’s history,” explains the historian Antônio de Toledo Piza (1848–1905) in the first issue of the Brazilian Historic and Geographic Institute’s magazine, in 1895.

Taunay directed the Ipiranga Museum and the Itu Convention Republican Museum until 1945. At that time, he was a professor at what was then called the School of Philosophy, Sciences, and Languages and Literature at USP and published 11 volumes of História geral das bandeiras paulistas (General history of São Paulo’s pioneers), between 1924 and 1950. He also wrote three dictionaries, incorporating entries for medicine, chemistry, physics, biology, and astronomy.

The rebirth of a museum

In 2013, when it closed its doors for renovations, the Paulista Museum (PM) had nearly ten exhibition rooms spread out over two floors and the bathrooms were located in the basement. When it reopens, in September, it will have bathrooms and elevators on all four floors and will be handicap accessible. The number of rooms for permanent or temporary exhibitions has jumped to 49, as a collection of nearly 200,000 pieces was moved to nearby buildings when renovations began, freeing up internal space.

The renovations, which began in 2019 and are now complete, cost a total of R$211 million. The exhibition space gained over 64,000 square feet and features a newly constructed basement. The number of annual visitors is expected to reach at least 700,000, double the number recorded approximately a decade ago.

“We have created a welcoming area for visitors, with bathrooms, a cafeteria, a bookstore, an auditorium, and an observation deck on the top floor,” recounts architect Rosaria Ono, director of the Paulista Museum and in charge of the team of about 100 people who are preparing the 11 exhibitions for the museum’s reinauguration.

According to her, the extensive renovations were necessary to bring the museum up to code and to ensure the safety of all employees and visitors. Another reason, she adds, is that “the building was not designed to be a museum, but rather a monument, like the Abraham Lincoln (1809–65) Memorial in Washington, DC, in the United States. It was originally intended to house only the painting Independência ou morte! (Independence or death!).”