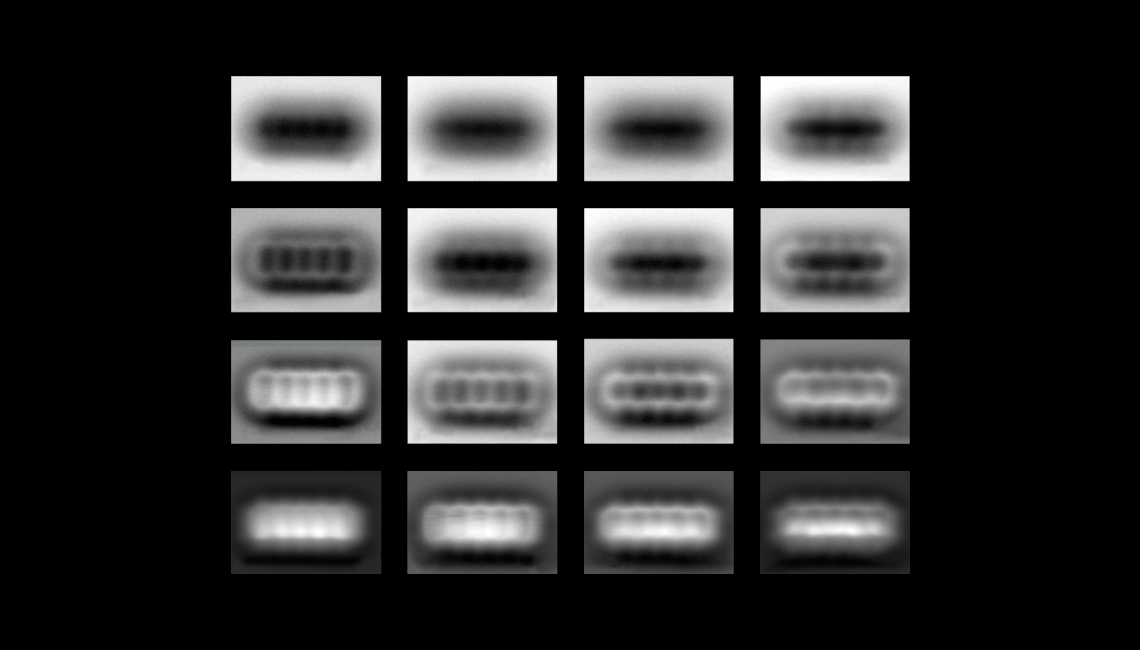 It took nearly two decades of work to develop the equipment and techniques needed to observe a phenomenon that chemists and physicists knew existed only from theory or computer simulations: the real-time structural changes that an individual molecule undergoes as it gains or loses electrical charges. At IBM’s research lab in Zurich, Switzerland, an international group of researchers, among them Brazilian physicist Shadi Fatayer, used an atomic force microscope (AFM) to record changes in geometry, charge distribution, and bonding between atoms within the molecules of four chemical compounds.

Molecules, defined as groups of two or more atoms, are the smallest units into which a chemical compound—biological or mineral, natural or synthetic—can be divided without losing its characteristic properties. Working with a group led by German physicist Leo Gross at IBM, Fatayer documented the changes exhibited by azobenzene, pentacene, tetracyanoquinodimethane (TCNQ), and porphine molecules as they lost or gained electrons (negatively charged particles). When they receive or lose electrons, each of these molecules undergoes distinctive changes, the researchers report in a paper published July 12 in Science, in which Fatayer, Gross, and colleagues at ExxonMobil in the US and at the University of Santiago de Compostela, in Spain, describe the experiment.

The shape of a molecule defines the chemical, electrical, and optical properties of a material and its ability to undergo chemical reactions

In an ultrahigh vacuum chamber kept at -268.15 degrees Celsius, Fatayer placed individual molecules of each of the organic compounds on very pure layers of sodium chloride (NaCl), or regular table salt, which acts as an electrical insulator. He then used a microscope to remove or inject one electron at a time into the individual molecules. “Our work has provided chemists and physicists with the experimental means to evaluate changes in other individual molecules,” says Fatayer, the lead author of the paper in Science and currently a postdoctoral fellow at IBM Zurich.

The first molecule to be analyzed was azobenzene, an organic compound used as a dye which at room temperature forms reddish orange crystals. An azobenzene molecule contains 24 atoms—12 carbon atoms (C), 10 hydrogen atoms (H), and 2 nitrogen atoms (N)—and is represented by the chemical formula C12H10N2. The atoms are organized into benzene rings—sets of six carbon atoms arranged in a hexagonal shape like an individual honeycomb cell. But when Fatayer injected an electron into the molecule, its geometry changed. One of the two bonds holding the nitrogen atoms together broke and the benzene rings bent in opposite directions.

Pentacene (C22H14) exhibited different behavior. This organic semiconductor has 22 carbon atoms and 14 hydrogen atoms structured in five linear chains of benzene rings. With the removal of an electron, and therefore with a positive charge, the molecule became wider and less elongated. When Fatayer added one electron at a time up to a total of three to the molecule, it lengthened and narrowed.

With the chemical formula C12H4N4, TCNQ is a highly conductive compound (it is used in organic electronics) that exists in the form of a greenish powder or yellow crystals. In a TCNQ molecule, a benzene ring is terminated at opposite ends by three carbon atoms, each connected to one nitrogen atom, resembling a pair of extended arms. In neutral form, the molecule attaches itself perpendicularly to the insulating sodium chloride surface. On gaining electrons, however, the benzene ring shifts to parallel position relative to the substrate and its ends bend—the curvature is greatest when one electron is added instead of two. “When we add or remove single electrons, we see how that changes the structure of the molecule,” Gross told New Scientist. “We already knew that it happened, but we didn’t know how the structure changes exactly, and that was really hard to observe.”

From a biological perspective, the most important molecule that Fatayer and his colleagues studied was porphine (C20H14N4). Porphine forms the nucleus of two molecules that are essential for life on Earth: chlorophyll, which uses sunlight to convert carbon dioxide (CO2) into sugars that nourish plants and make them grow; and hemoglobin, which transports oxygen (O2) in the blood stream for use in producing energy, and eliminates the byproduct from this chemical reaction, CO2. Porphine has a more complex chemical structure than the other molecules analyzed, and exhibited changes in its chemical bonds and in the distance between atoms as electrons were added.

“The Zurich group’s research is of indisputable value,” says physicist Abner de Siervo of the University of Campinas (UNICAMP), who advised Fatayer during his master’s program, which he pursued with FAPESP grant funding. He explains that the loss or gain of electrons can alter the shape of a molecule, an extremely important property. “Shape defines the chemical, electrical, and optical properties of a material,” explains Siervo. “Depending on these properties, certain reactions will occur and others will not.” 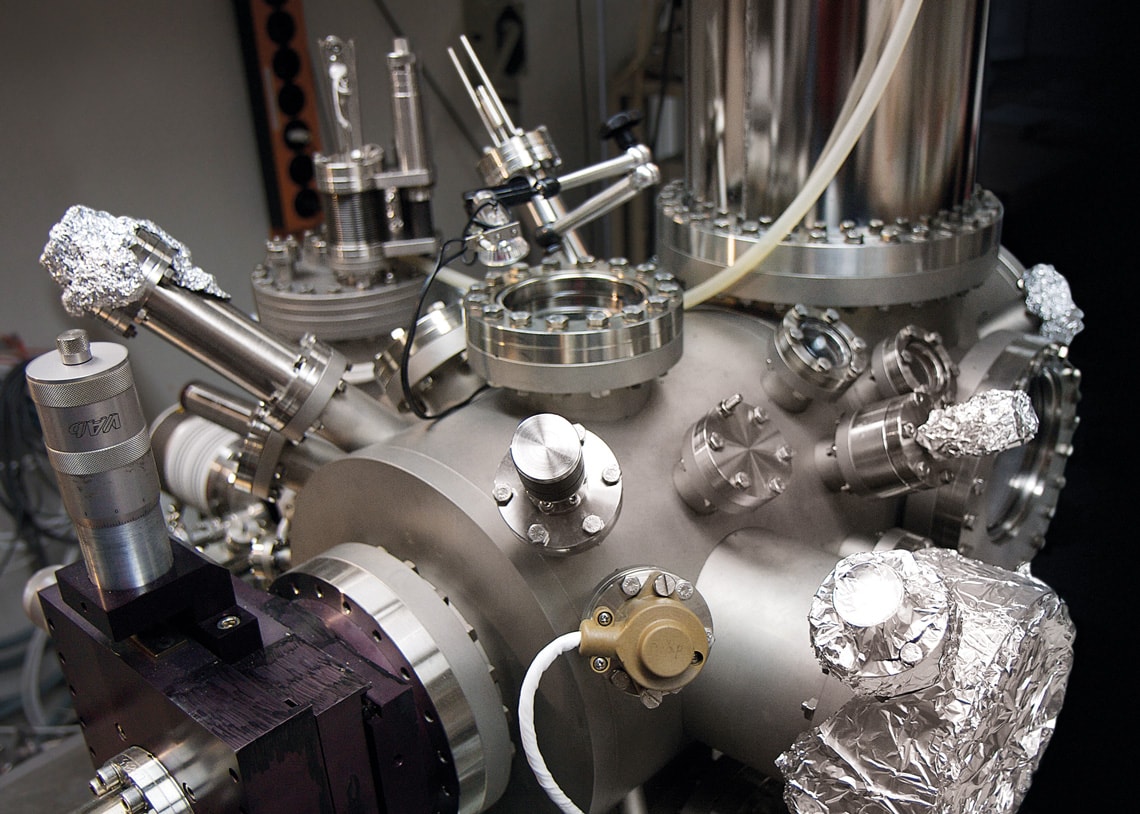 An atomic force microscope at IBM Zurich: the company developed the device in the 1980sMichael Lowry / IBM Zurich

An image at the tip of an atom
The Zurich group’s work with the four molecules was made possible by a series of developments in methods for imaging molecules and atoms. In 1981, two IBM physicists in Zurich, Heinrich Rohrer (1933–2013) and Gerd Binnig, developed the first scanning tunneling microscope (STM), the precursor to the atomic force microscope invented by Binnig and colleagues five years later. For their creation of the STM, Rohrer and Binnig won the Nobel Prize in Physics in 1986.

The atomic force microscope, a device often as large as an entire room, achieves resolutions about a thousand times higher than the most powerful optical microscopes—with optical instruments, light reflected from the specimen passes through a set of lenses and generates a magnified image. In atomic force microscopes, an extremely sharp (usually metallic or insulating) tip scans the surface of the specimen without touching it. Like someone tracing the bumps and valleys of a text in Braille with their finger, the tip senses the electrical forces of attraction and repulsion of the material and produces a three-dimensional map, which is then translated into an image. The smaller the tip diameter, the more detail it detects.

Toward the end of the previous decade, Leo Gross and the then-head of the IBM group in Zurich, German physicist Gerhard Meyer, further improved the resolution of the atomic force microscope by placing an inert molecule only two atoms long—carbon monoxide (CO)—perpendicular to the metal tip. With the carbon atom attached to the metal, the oxygen atom is at the free end and the tip is only one atom thick.