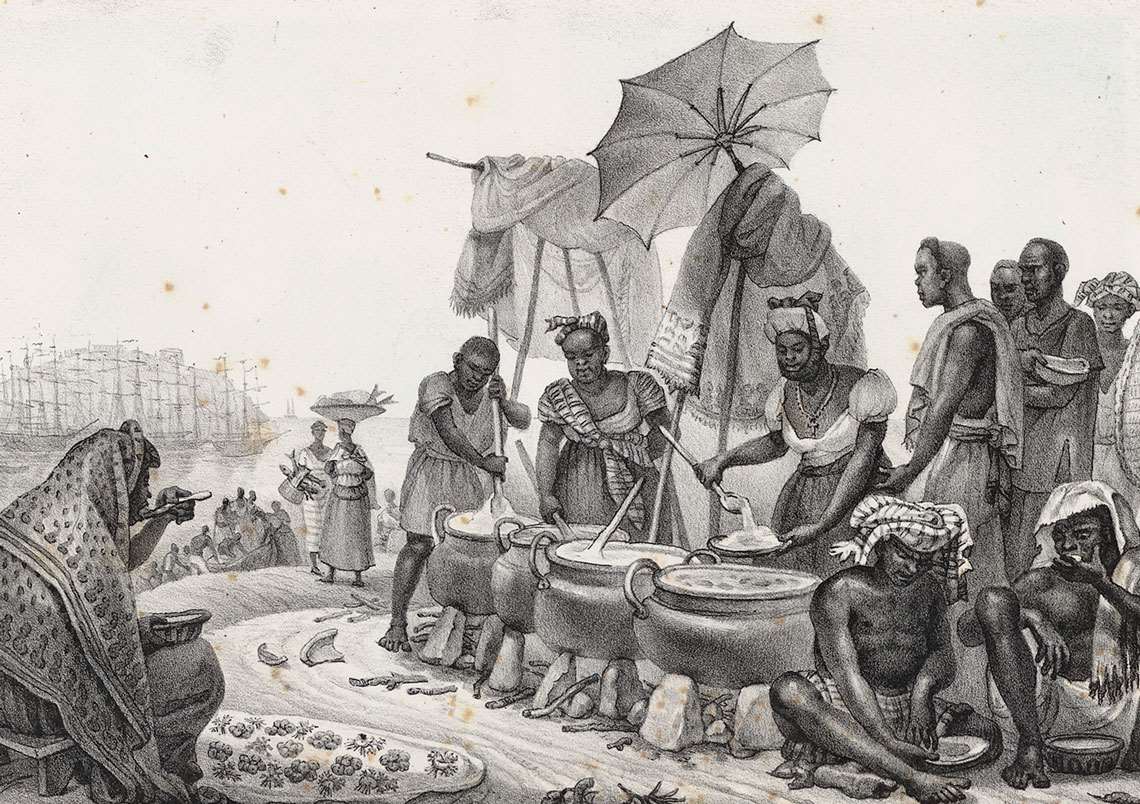 “I draw your attention, gentlemen, to an ailment that I had the occasion to observe in Rio de Janeiro in early 1864.” Thus begins an article by Brazilian ophthalmologist Manoel da Gama Lobo (1831–1883) in the June 1865 edition of Annaes Brazilienses de Medicina, a journal published by the Brazilian Academy of Medicine. It was the first description in Brazil of a condition which he termed as oftalmia brasiliana but is known today as xerophthalmia, a disease caused by a severe deficiency of vitamin A. Even today, vitamin A deficiency remains a significant public health problem globally, with an estimated 190 million school-aged children and 19 million pregnant women affected around the world. The highest burden is found in the regions of Africa and South-East Asia, according to the World Health Organization (WHO).

Gama Lobo described the disease as gradually destroying sufferers’ eyeball structures and potentially causing blindness, based on his observations of four slave children between 16 months and 5 years of age. They were all extremely thin, had severe diarrhea, their eyelids were gummed together and could not be opened, and their conjunctiva—the transparent membrane that covers the white part of the eye—was dry. Even after treatment with eye drops and good nutrition, they all died within six months at most. The only mistake the physician apparently made in his approach to treatment was that in one of the children, he thought a secretion from the eye was pus and squeezed it out, possibly exacerbating the child’s loss of vision, notes Leonor Maria Pacheco Santos, a professor of chemistry at the University of Brasília (UnB). 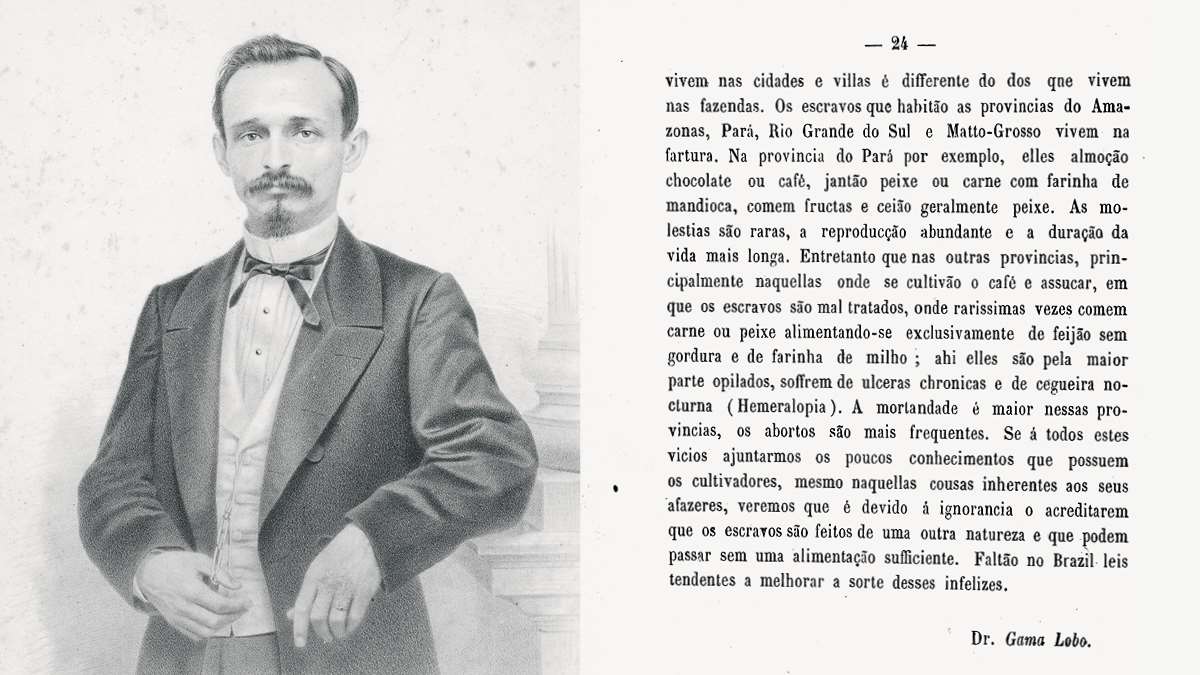 Gama Lobo criticized farmers for their ill-treatment of slaves. Pictured above is the closing paragraph of an article in which he described vitamin deficiency in slavesBrazilian Academy of Medicine

But he correctly diagnosed the cause of the eye condition he observed as being “the lack of adequate and sufficient nutrition to which farmers’ slaves are subjected…a body deprived of vital nutrients is unable to supply the elements needed for corneal nutrition.” Santos notes that loss of vision was one of many consequences of slaves’ severe physical impairment, along with chronic bronchitis, diarrhea, weakness, and prostration.

“Gama Lobo did a remarkable job in linking the hunger and privation that slave children and their mothers endured to the symptoms of visual impairment, at a time when vitamins had not yet been discovered,” says Francisco de Assis Guedes de Vasconcelos, a nutritionist at the Federal University of Santa Catarina (UFSC). He and Santos coauthored a 2007 article about the physician in the Brazilian Journal História, Ciências, Saúde – Manguinhos. 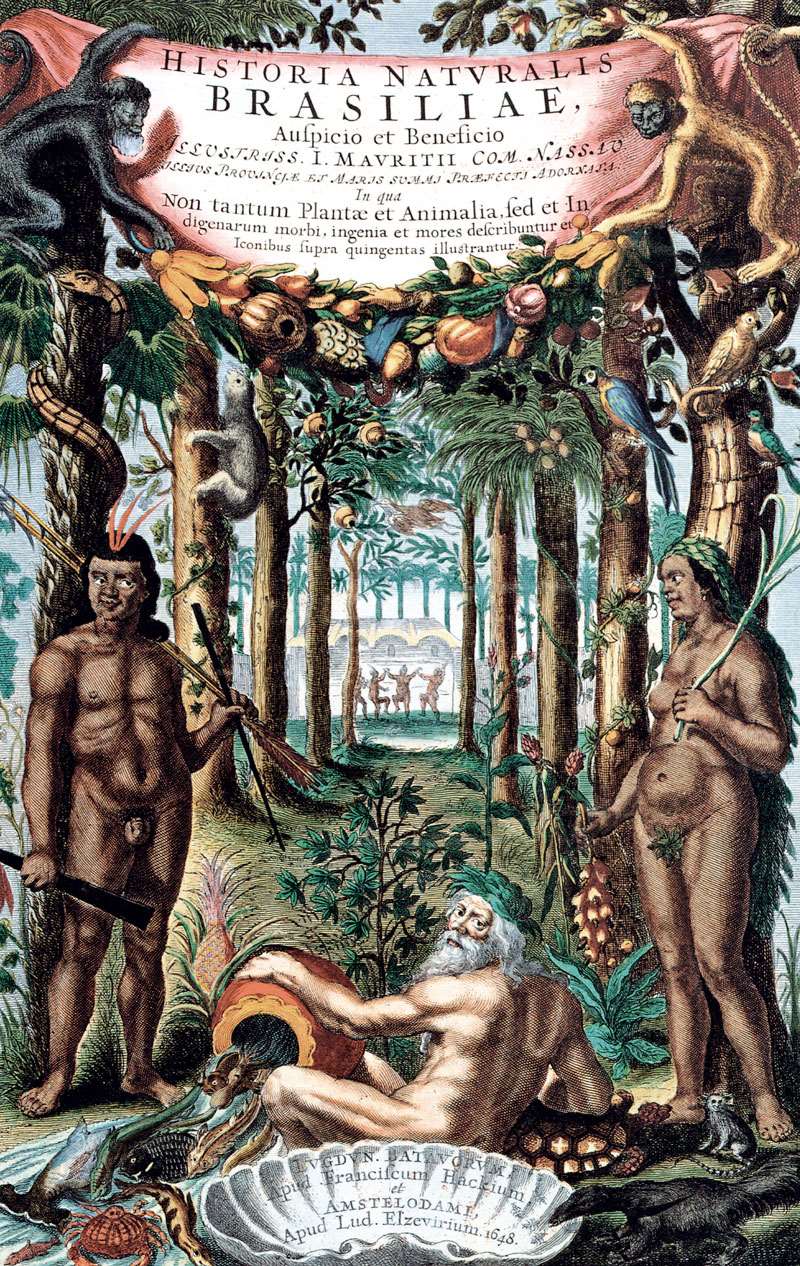 The cover of Historia Naturalis Brasiliae, a book published in the Netherlands in 1648. Originally written in Latin by Willem Piso and George Marcgraf, the book documented cases of eye lesions caused by malnutrition in BrazilWikimedia

It was only in 1912 that chemist Marguerite Davis (1887–1967) and biochemist Elmer McCollum (1879–1967), at the University of Wisconsin in Madison, identified a micronutrient whose deficiency caused stunted growth and xerophthalmia in laboratory mice. Initially referred to as a “fat-soluble accessory factor,” and later renamed as vitamin A—the first vitamin to be discovered—the micronutrient has since been shown to play a vital role in maintaining the function of rod photoreceptor cells (the cells in the retina responsible for night vision); in eye surface hydration, including the formation of tears; in cell renewal; and in the development of bones, teeth, and hair.

In his book The Geography of Hunger (Editora O Cruzeiro, 1946), Brazilian physician Josué de Castro (1908–1973) recognizes Gama Lobo’s contributions and describes how the earliest known cases of night blindness—one of the symptoms of Vitamin A deficiency—among soldiers and poor people in Brazil were reported by Willem Piso (1611–1678), a physician who accompanied count John Maurice of Nassau (1604–1679) during the Dutch occupation of Pernambuco. He documented his observations of eye lesions, which he attributed to malnutrition, in the book Historia Naturalis Brasiliae, coauthored with the German mathematician and naturalist George Marcgraf (1610–1644) and published in Latin in 1648. Corroborating Gama Lobo’s observations, in 1883 fellow ophthalmologist Hilário Soares de Gouveia (1843–1923), a professor at the School of Medicine of Rio de Janeiro, reported night blindness among black slaves on coffee plantations in the then province of São Paulo.

“Even though knowledge about nutrition was then limited, [slave] diets were widely recognized as being inadequate,” wrote Márcia Amantino, a professor of history at Universidade Salgado de Oliveira, in an article she published in 2007 in the journal História, Ciências, Saúde – Manguinhos. A slave’s basic diet, as described by Gama Lobo in his study, consisted of beans or pumpkin cooked with corn porridge and, once or twice a week, a serving of dried meat—very little, he argued, for a person who woke up at 3 a.m. and did heavy labor until 9 p.m. “If they were well nourished and well treated, not only would their diseases be fewer, but their work would be doubled by their increased strength,” the physician wrote in his article. He observed that disease was rarer and lifespans were longer in those places where black slaves received a healthy diet with fish and fruits, such as in the provinces of Amazonas, Pará, Rio Grande do Sul, and Mato Grosso.

Conversely, in sugar and coffee producing regions, little attention was paid to nutrition and disease among slaves. To illustrate the sentiment during that period, Amantino cites the famous rant by the slave trader Salazar in the 1884 play O escravocrata, by Artur de Azevedo (1855–1908): “Negroes do not have leave to be sick. As long as they are breathing, they must be at the hoe, whether they want to or not. For the illness of a Negro, there is one supreme, infallible, and sole remedy: the whip. Give me a dying Negro and a whip, and see if I will not make him lively and nimble again with a half dozen lashes!” The consequences of malnutrition in the Brazilian population have also been depicted elsewhere in Brazilian literature, such as the 1890 novel A fome (The famine) by Rodolfo Teófilo (1853–1932), describing a severe drought during that period in Ceará.

“Gama Lobo was an abolitionist and often criticized landowners for their ill-treatment of slaves. He said: ‘Farmers are mistaken who think that blacks are of a nature other than human,’” notes Santos. “He was a progressive linked to the Tropicalista School of Medicine, a group of activist scientists,” says Vasconcelos. After attending medical school in Bahia and Rio de Janeiro, Gama Lobo worked as a doctor at the Royal Arsenal in Rio de Janeiro before going to Germany to specialize in ophthalmology. “His natural curiosity found fertile ground in Germany, where he was exposed to the two major medical currents that began to dominate in the second half of the nineteenth century,” says José Divino Lopes Filho, a nutritionist and historian at the Federal University of Minas Gerais (UFMG). 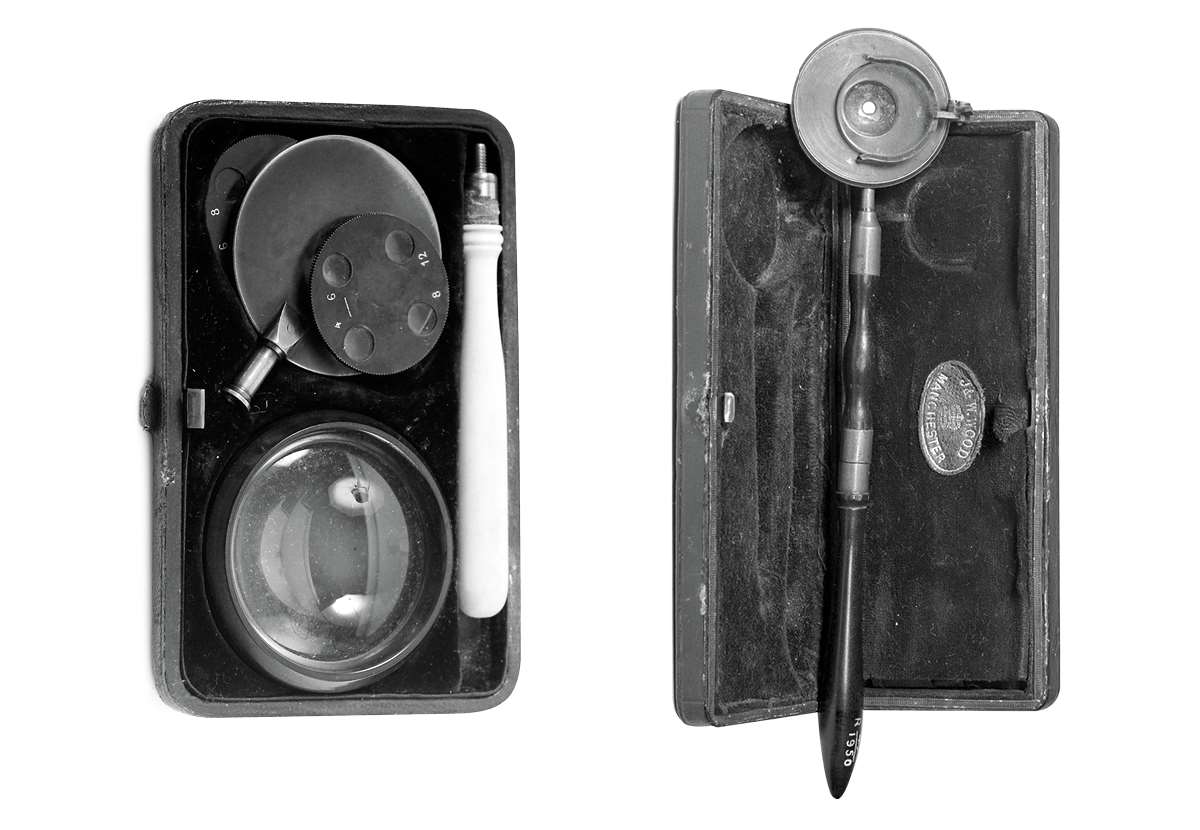 The first current, germ theory, proposed by the French chemist Louis Pasteur (1822–1895) and the German microbiologist Robert Koch (1843–1910), attributed certain diseases to microorganisms, based on evidence that the two scientists had each discovered. The other current linked diseases to dietary deficiencies and was influenced by the discoveries of three scientists: the French chemist Antoine Laurent de Lavoisier (1743–1794), who, using an apparatus that he himself had devised, demonstrated that cellular respiration is essentially the combustion (controlled burning) of food; the German physiologist Max Rubner (1854–1932), who in 1883 determined the energy content of proteins, carbohydrates, and fats; and the Dutch pathologist Christiaan Eijkman (1858–1930), who discovered that beriberi is caused by vitamin B1 deficiency. Rubner received the Nobel Prize in Medicine or Physiology in 1919, followed by Eijkman in 1929. “On many occasions the two theories competed with each other to explain the origin of diseases; beriberi, for instance, was initially believed to be caused by microorganisms,” says Lopes Filho. “Gama Lobo returned to Brazil equipped with the latest scientific ideas of his time.”

Back in Rio, he was appointed as the first head of the Santa Casa da Misericórdia Eye Service. He also did research on yellow fever and identified another eye disease, syphilitic retinitis, derived from syphilis, in 1863. The following year he reported on an outbreak of catarrhal ophthalmia, a disease that causes inflammation of the conjunctiva and gumming together of the eyelids, in the journal Annaes Brasilienses de Medicina. He published further research in medical journals in Brazil, Portugal, and Germany until his death at age 52 aboard a ship as he returned from yet another trip to Europe.

After slavery was abolished in 1888, reports of blindness due to malnutrition in Brazil became scarce—except, that is, during drought periods in the country’s Northeast. In the early 1980s, after an extended drought, Santos encountered children up to 2 years old who had become blind as a result of malnutrition at a hospital run by the Federal University of Paraíba (UFPB) in João Pessoa. She reported her findings in a May 1984 article in Jornal de Pediatria. Her research helped to inform a national program to reduce vitamin A deficiency in Brazil. The program was first launched in 1986, then discontinued in 1997 before being recreated in 2005. As part of the program, vitamin A capsules are distributed to children under 5 years during vaccination campaigns at basic health centers; the nutrient is gradually released from the liver over a period of six months.

“Vitamin A deficiency levels are now far lower than in the past, but the national program has yet to reach the country’s poorest communities, which suffer most from food insecurity,” says Lopes Filho. According to the Brazilian Ministry of Health’s 2019 National Survey of Child Nutrition (ENANI-2019), the region with the highest prevalence of vitamin A deficiency in children under 5 years old was the Midwest (9.5 %) and the lowest was the Southeast (4.3%). However, warns Vasconcelos, the “dismantling of the public health system and social programs,” higher unemployment and the COVID-19 pandemic are increasing the risk of food insecurity—in 2017 and 2018, more than 10 million people reported experiencing hunger in Brazil according to the Brazilian Institute of Geography and Statistics (see Pesquisa FAPESP issue nº 297).

“Vitamin A affects our entire body—it helps to maintain the integrity and function of surface tissues in our lungs, intestines, and eyes,” says Santos, who coauthored a July 1994 paper in The Lancet showing that vitamin supplementation had reduced the prevalence of diarrhea by 23% in children living in Brazil’s Northeastern town of Serrinhas. She stresses the importance of consuming foods that are rich in vitamin A, such as butter and whole milk, as well as vegetables rich in beta-carotene, which the body converts into vitamin A. “Besides fruits and vegetables that are orange or deep yellow, such as carrots, pumpkins, and mangoes, other sources include buriti, pequi, and palm oil,” she says. “Buriti oil is one of the world’s richest sources of vitamin A.”